Concussion, also known as mild traumatic brain injury (mTBI), commonly causes transient neurocognitive symptoms, but in some cases, it causes cognitive impairment, including working memory (WM) deficit, which can be long-lasting and impede a patient’s return to work. The predictors of long-term cognitive outcomes following mTBI remain unclear, because abnormality is often absent in structural imaging findings. Previous studies have demonstrated that WM functional activity estimated from functional magnetic resonance imaging (fMRI) has a high sensitivity to postconcussion WM deficits and may be used to not only evaluate but guide treatment strategies, especially targeting brain areas involved in postconcussion cognitive decline. The purpose of the study was to determine whether machine learning-based models using fMRI biomarkers and demographic or neuropsychological measures at the baseline could effectively predict the 1-year cognitive outcomes of concussion. We conducted a prospective, observational study of patients with mTBI who were compared with demographically matched healthy controls enrolled between September 2015 and August 2020. Baseline assessments were collected within the first week of injury, and follow-ups were conducted at 6 weeks, 3 months, 6 months, and 1 year. Potential demographic, neuropsychological, and fMRI features were selected according to their significance of correlation with the estimated changes in WM ability. The support vector machine classifier was trained using these potential features and estimated changes in WM between the predefined time periods. Patients demonstrated significant cognitive recovery at the third month, followed by worsened performance after 6 months, which persisted until 1 year after a concussion. Approximately half of the patients experienced prolonged cognitive impairment at the 1-year follow up. Satisfactory predictions were achieved for patients whose WM function did not recover at 3 months (accuracy = 87.5%), 6 months (accuracy = 83.3%), and 1 year (accuracy = 83.3%) and performed worse at the 1-year follow-up compared to the baseline assessment (accuracy = 83.3%). This study demonstrated the feasibility of personalized prediction for long-term postconcussive WM outcomes based on baseline fMRI and demographic features, opening a new avenue for early rehabilitation intervention in selected individuals with possible poor long-term cognitive outcomes. View Full-Text
Keywords: concussion; mild traumatic brain injury; working memory; long-term cognitive outcome; support vector machine classifier; personalized prediction concussion; mild traumatic brain injury; working memory; long-term cognitive outcome; support vector machine classifier; personalized prediction
►▼ Show Figures 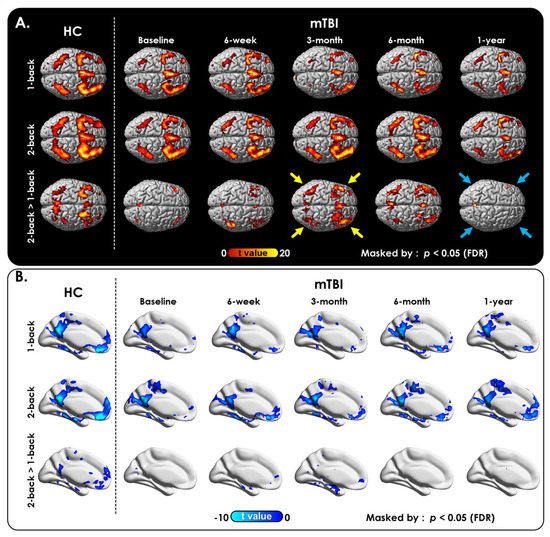