Background: Diagnosis of sepsis in burn patients remains difficult for various reasons. One major problem is the definition of sepsis itself. Therefore, previous and current sepsis definitions are a matter of ongoing validation, but a well-defined consensus on which clinical and laboratory parameters to incorporate in such a definition is lacking. The aim of the present study was to compare the incidence and time-related occurrence of septic events according to different definitions as well as their accompanying time course of pro-inflammatory biomarkers. Methods: Across the first 14 days after admission, the incidence and time point of sepsis according to three different definitions (Sepsis-3, Sepsis American Burns Association [ABA] 2007, Sepsis Zurich Burn Center) were assessed on a daily basis in adult burn patients with total body surface area (TBSA) ≥15% admitted to the Zurich Burn Center between May 2015 and October 2018. In order to investigate how well daily drawn proinflammatory biomarkers (white blood cells (WBCs), C-reactive protein (CRP), procalcitonin (PCT), and novel pancreatic stone protein (PSP)) reflect the progression of sepsis depending on its type of definition, a longitudinal mixed model analysis was performed across the first 14 days for septic and non-septic patients. Additionally, the relative increase of biomarker levels 24, 48, and 72 h prior to a septic event was analyzed for each definition used. Results: In our cohort of 90 severely burned patients, Sepsis-3 identified 46 patients (51.1%) as septic, while ABA 2007 and the Zurich Burn Center definition counted 33 patients (36.7%) and 24 patients (26.6%), respectively. Sepsis-3 detected sepsis about 1 day earlier than Sepsis ABA 2007 (p < 0.001) and about 0.5 days earlier than Sepsis Zurich Burn Center (p = 0.04). The course of pro-inflammatory biomarkers was largely unaffected by the type of sepsis definition. Irrespective of the sepsis definition, PSP was the only marker to demonstrate a highly significant interaction between time and group (sepsis versus no sepsis) (p < 0.001) with a 3.3–5.5-fold increase within 72 h before the event of sepsis, whereas CRP, PCT, and WBC showed only mild undulations. Conclusions: Despite the ongoing dilemma of how to define sepsis in burn patients, a continually calculated SOFA score as used in Sepsis-3 is advantageous to early identify a patient’s detrimental progression to sepsis. Inclusion of biomarkers, such as PSP, may help support the burn specialist’s diagnosis of sepsis and could improve the diagnostic performance of current and future definitions in burn patients. View Full-Text
Keywords: burns; sepsis; pro-inflammatory biomarkers burns; sepsis; pro-inflammatory biomarkers
►▼ Show Figures 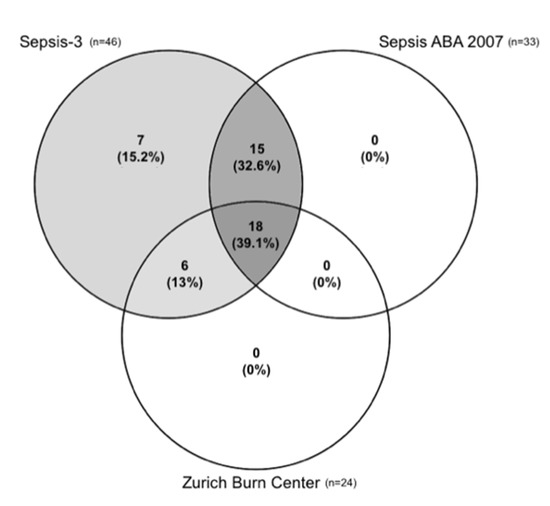