Oral Microbiota: A Major Player in the Diagnosis of Systemic Diseases

Alteration in Nasopharyngeal Microbiota Profile in Aged Patients with COVID-19

:
Severe acute respiratory syndrome coronavirus 2 (SARS-Cov-2) is an infectious virus that causes coronavirus disease 2019 (COVID-19) transmitted mainly through droplets and aerosol affecting the respiratory tract and lungs. Little is known regarding why some individuals are more susceptible than others and develop severe symptoms. In this study, we analyzed the nasopharyngeal microbiota profile of aged patients with COVID-19 (asymptomatic vs. symptomatic) vs. healthy individuals. We examined the nasopharynx swab of 84 aged-matched patients, out of which 27 were negative asymptomatic (NegA), 30 were positive asymptomatic (PA), and 27 patients were positive symptomatic (PSY). Our analysis revealed the presence of abundant Cyanobacterial taxa at phylum level in PA (p-value = 0.0016) and PSY (p-value = 0.00038) patients along with an upward trend in the population of Litoricola, Amylibacter, Balneola, and Aeromonas at the genus level. Furthermore, to know the relationship between the nasal microbiota composition and severity of COVID-19, we compared PA and PSY groups. Our data show that the nasal microbiota of PSY patients was significantly enriched with the signatures of two bacterial taxa: Cutibacterium (p-value = 0.045) and Lentimonas (p-value = 0.007). Furthermore, we also found a significantly lower abundance of five bacterial taxa, namely: Prevotellaceae (p-value = 7 × 10−6), Luminiphilus (p-value = 0.027), Flectobacillus (p-value = 0.027), Comamonas (p-value = 0.048), and Jannaschia (p-value = 0.012) in PSY patients. The dysbiosis of the nasal microbiota in COVID-19 positive patients might have a role in contributing to the severity of COVID-19. The findings of our study show that there is a strong correlation between the composition of the nasal microbiota and COVID-19 severity. Further studies are needed to validate our finding in large-scale samples and to correlate immune response (cytokine Strome) and nasal microbiota to identify underlying mechanisms and develop therapeutic strategies against COVID-19.
Keywords:
microbiota; nasopharyngeal profile in aged patients with COVID-19 infection and severity

In little more than three months after the first discovery of the SARS-Cov-2 virus in Hubei, Wuhan, China, in the early days of 2020, the virus quickly spread across the globe. The novel nature of COVID-19 has left our immune systems completely vulnerable to disease. Now, at the time of writing, COVID-19 has been documented to have infected over 146 million individuals, while also claiming the lives of well over three million people, according to Johns Hopkins Coronavirus Resource Center [1]. Although the case fatality rate is orders of magnitude lower than other infectious diseases, such as Ebola and SARS [2,3], the high transmissibility and respiratory nature of the virus are great concerns.
Due to COVID-19 being a new disease, research and information about the symptoms, side effects, prognosis, and treatment are very limited, and gathering more is an ongoing process. However, since the virus began spreading worldwide last year, our knowledge regarding many aspects of the disease has vastly improved. For instance, we now know that the risk of hospitalization and mortality is greatly increased in individuals aged 65+ and those who have underlying conditions, including hypertension, diabetes, and other metabolic disorders [4,5,6]. The most striking feature of COVID-19 positive patients is the wide clinical spectrum, with the majority remaining asymptomatic or exhibiting mild cold-like symptoms, while others have severe viral pneumonia requiring prolonged hospitalization in intensive care unit stay or resulting in death. Reasons as to why some individuals exhibit mild to severe symptoms, while others are solely asymptomatic, are still unknown. Recently, several studies have suggested that bacterial composition of the nasal canal can have a drastic influence upon the development of respiratory infections and the severity of symptoms that accompany the illness [7,8,9,10,11]. It has also been reported that an increase in species richness in an individual’s nasal microbiota is correlated to fewer and less severe symptoms during rhinovirus infections [8,9].
In the last several decades, clinical studies have uncovered the critical roles played by the microflora population in directing and regulating various biological systems throughout the body. Diseases such as chronic inflammatory bowel syndrome, peptic ulcers, and viral diseases have all been recently linked to significant changes in the microbiota of the gut, nasal and oral cavity. Considering COVID-19′s similar characteristics to many viruses, it seems plausible to think that a patient’s nasal microbiota may play a key role in determining the degree to which they exhibit symptoms. Therefore, this study aimed to compare the nasal bacteriome in patients with severe COVID-19 with that of asymptomatic COVID-19 and healthy individuals to document the changes in the diversity and composition of bacteriome between the three cohorts.

Study site, ethics, and collection of patient specimens: The samples were processed under an approved HAC by the IRB Committee A (IRB REGISTRATION # 611298), Augusta University, GA. All methods were performed in accordance with the relevant guidelines and regulations. No consent was needed because it was a retrospective study. Based on the IRB approval, all personal health information (PHI) was removed and all data were anonymized before accessing for the study. The study evaluated 84 (49–78-year-old) patients’ nasopharyngeal (NPS) clinical specimens, which included 27 negative asymptomatic (NegA), 30 positive COVID-19 asymptomatic (PA), and 27 positive COVID-19 symptomatic (PSY) samples matched by age, gender, and race (Supplementary Table S1). NPS samples collected in either healthcare or community setting were tested using the FDA-EUA approved SARS-CoV-2 assay (PerkinElmer, Inc., Waltham, MA, USA). As a standard protocol, NPS samples were collected by a healthcare worker using a sterile flocked swab placed in a sterile tube containing the viral transport medium (VTM) (Becton Dickinson, USA, cat. no. 22053). All samples were transported to the SARS-CoV-2 testing facility at Augusta University, GA, within 24 h of sample collection, for further processing.
FDA-EUA approved assay for the detection of SARS-CoV-2 (SARS-specific assay): The assay is based on nucleic acid extraction followed by TaqMan-based RT-PCR assay to conduct in vitro transcription of SARS-CoV-2 RNA, DNA amplification, and fluorescence detection (FDA-EUA assay by PerkinElmer, Inc., Waltham, MA, USA, cat. no. 2019-nCoV-PCR-AUS) [12]. The assay targets specific genomic regions of SARS-CoV-2: nucleocapsid (N) and ORF1ab gene. The TaqMan probes for the two amplicons are labelled with FAM and ROX fluorescent dyes, respectively, to generate target-specific signals. The assay includes an RNA internal control (IC, bacteriophage MS2) to monitor processes from nucleic acid extraction to fluorescence detection. The IC probe is labelled with VIC fluorescent dye to differentiate its fluorescent signal from SARS-CoV-2 targets. The samples were resulted as positive or negative based on the Ct values specified by the manufacturer. For a detailed method, please refer to Sahajpal, NS, et al. [12].
Microbial Community Profiling Using 16S rRNA Amplicon Sequencing: The DNA isolation kit (Qiagen, USA) was used to isolate genomic DNA samples from NPS samples as per manufacturer’s protocol. The isolated genomic DNA was quantified with nanodrop and stored at -20 C. The DNA samples were shipped to Integrated Microbiome Resource (Dalhousie University, Halifax, NS, Canada) for 16S V4-V5 region amplicon sequencing on Illumina MiSeq, resulting in 300 bp paired-end reads.
Bioinformatics Analysis: We processed the data using the Microbiome Helper workflow based on QIIME2 (version 2020.8) [13,14]. Briefly, the raw data were trimmed to remove primer sequence using cutadapt, and VSEARCH was used to join forward and reverse reads before quality filtering at default settings. Deblur was employed to identify amplicon sequence variants (ASVs) with default parameters and p-trim-length set to 357 bp. Taxonomy to ASVs was assigned using a Naive Bayes approach implemented in the scikit-learn Python library and the SILVA database. Rare, contaminant, and unclassified ASVs were removed from downstream analysis. All statistical analysis and visualizations were conducted in R (version 3.6.3) using phyloseq, vegan, and ggplot2 packages. ASV counts were transformed to relative abundance for comparison of taxonomic abundance between different sample groups using multiple group Kruskal–Wallis test and two-group comparison with Wilcoxon test. Statistical differences in beta diversity were examined with PERMANOVA and PERMDISP tests using QIIME 2 plugins and Vegan package in R. Differential abundance of taxa between groups was identified using the linear discriminant analysis effect size (LEfSe).

The following are available online at https://www.mdpi.com/article/10.3390/diagnostics11091622/s1, Table S1: Detailed information of the samples used for the current study.

S.F. conceived the idea for the manuscript, and drafted the initial manuscript with S.V., G.T.P., and S.K. R.K., N.S.S., S.A. (Satish Adusumilli), A.K.M., and S.A. (Sudha Ananth), collection of samples and DNA isolation; A.S.D. and S.V., data analysis; A.M.R., C.M.I., N.S.S., and R.K. made the final edits to the manuscript. All authors have read and agreed to the published version of the manuscript.

The study was performed under AUIRB-HAC: 611298, Augusta University, GA.

Patient consent was waived as the study was performed on discarded samples under AUIRB-HAC: 611298.

All relevant data is made available in the manuscript and supplementary files.

We would like to thank The Department of Medicine, Department of Pathology, Division of Endocrinology, and Center for Healthy Aging for their support. 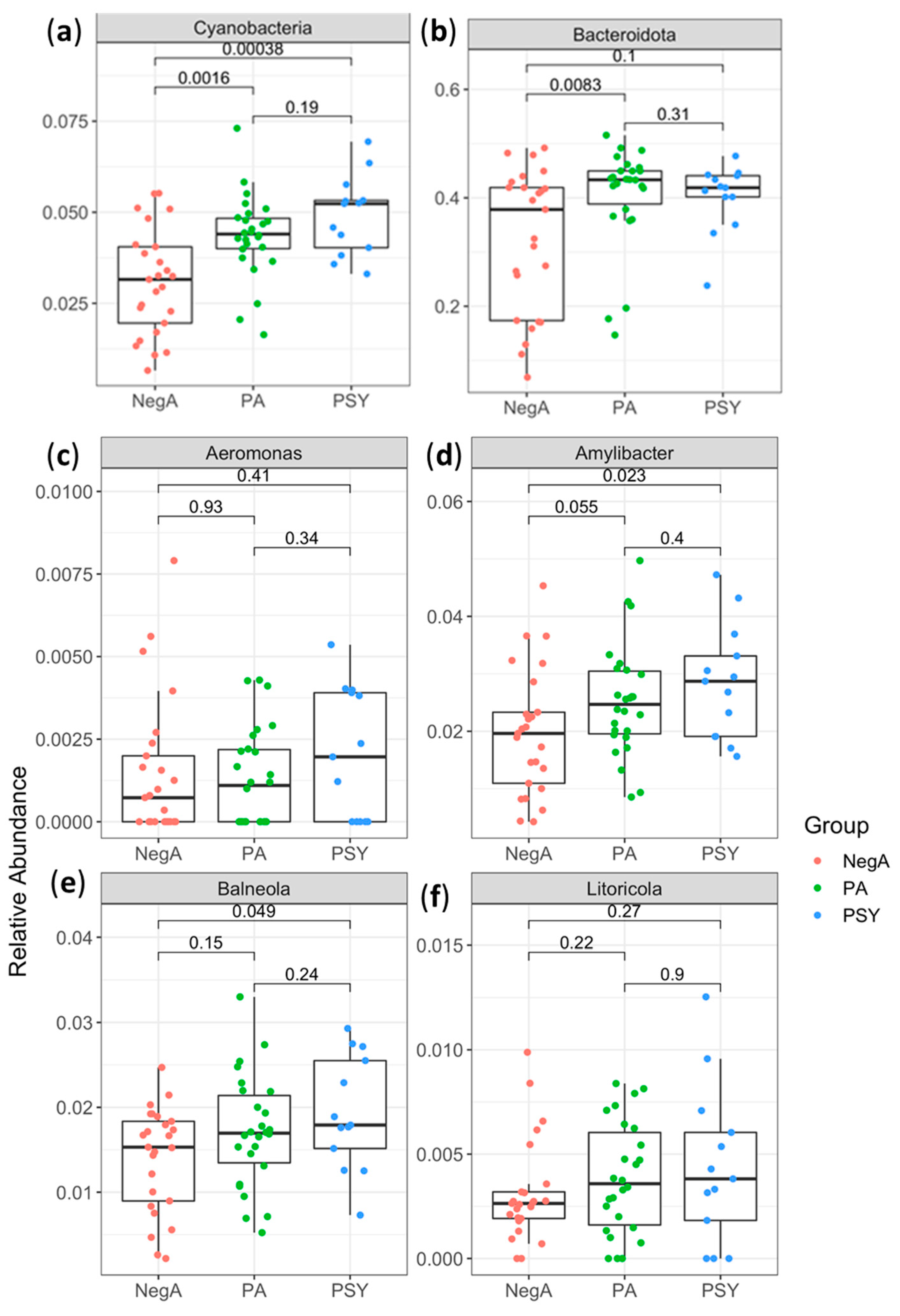 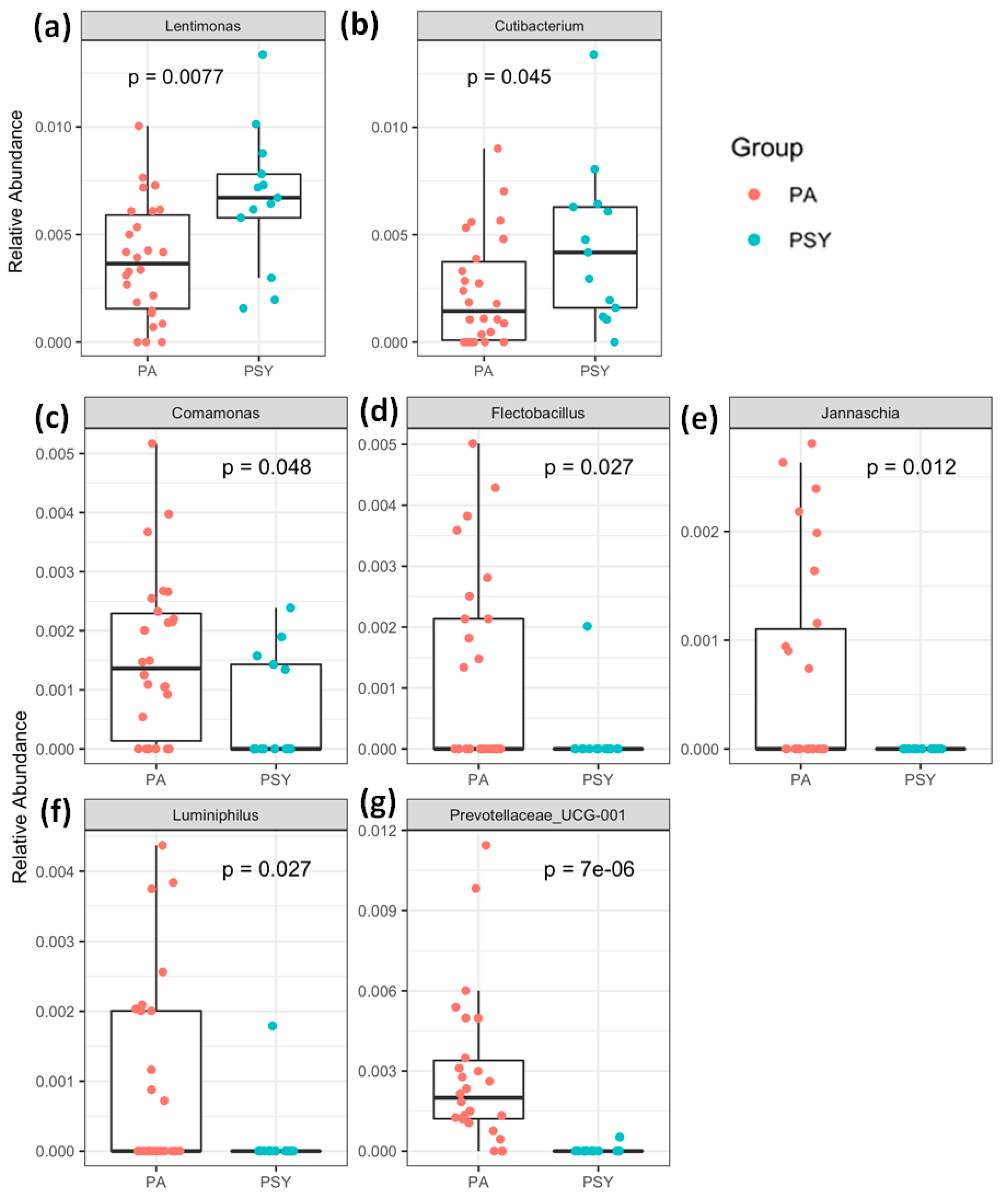