DGEMRIC in the Assessment of Pre-Morphological Cartilage Degeneration in Rheumatic Disease: Rheumatoid Arthritis vs. Psoriatic Arthritis
Next Article in Special Issue

A Pound of Flesh: What Cachexia Is and What It Is Not

Background: Due to its association with the risk of falling and consequent injury, the importance of agility is widely recognized, but no study so far has examined the different facets of agility in an untrained/clinical population. The aim of this study was to evaluate the reliability, validity, and correlates of newly developed tests of non-planned agility (NPA) and pre-planned agility (PPA) in an untrained/clinical sample. Methods: The sample comprised 38 participants older than 40 years (22 females, age: 56.1 ± 17.3 years, height: 170.4 ± 10.8 cm, mass: 82.54 ± 14.79 kg) who were involved in a rehabilitation program following total knee arthroplasty and knee arthroscopy. Variables included age, gender, type of surgery, history of fall, anthropometrics/body composition, and newly developed tests of NPA and PPA. Results: The results showed the high inter-testing- (ICC > 0.95, CV < 9%), and intra-testing-reliability (ICC > 0.96, CV < 9) of the newly developed tests. PPA and NPA were found to be valid in differentiation between age groups (>50 yrs. vs. <50 yrs.), and genders, with better performance in younger participants and males. Only NPA differentiated participants according to type of surgery, with better performance in those who had arthroscopic surgery, than those who had total knee arthroplasty. No differences in NPA and PPA were established between groups based on fall-history. In females, the body mass (Pearson’s r = 0.58 and 0.59, p < 0.001) and body fatness (Pearson’s r = 0.64 and 0.66, p < 0.001) were negatively correlated, while the lean body mass (Pearson’s r = 0.70 and 0.68, p < 0.001) was positively correlated with PPA and NPA. The NPA and PPA were highly correlated (Pearson’s r = 0.98, p < 0.001). Conclusions: We found that the proposed tests are reliable when evaluating agility characteristics in an untrained/clinical population after knee arthroplasty/arthroscopy. Further evaluation of the specific validity of the proposed tests in other specific subsamples is warranted. View Full-Text
Keywords: change of direction; reliability; validity; postoperative status; rehabilitation change of direction; reliability; validity; postoperative status; rehabilitation
►▼ Show Figures 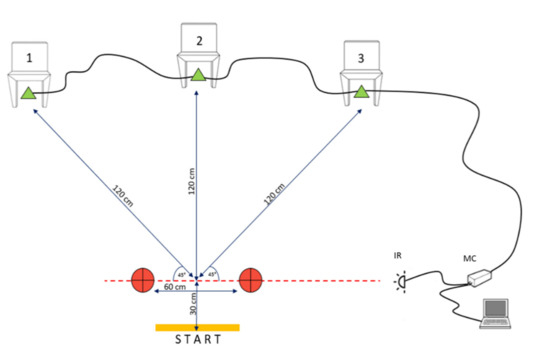