The Expansion of Cholangioscopy: Established and Investigational Uses of SpyGlass in Biliary and Pancreatic Disorders
Previous Article in Journal

A Pancreatic Inflammatory Myofibroblastic Tumor with Spontaneous Remission: A Case Report with a Literature Review

Currently, the incidence and mortality rate of pancreatic cancer are rising rapidly, and it is the fourth leading cause of cancer death in the USA and Japan [1,2]. Even with recent advancements in diagnostic imaging modalities, most cases of pancreatic cancer are discovered at an unresectable stage when the prognosis is poor and the 5-year survival rate is 3% [1].
However, Agarwal et al. reported that the early diagnosis of pancreatic cancer should be achieved before the lesion reaches 20 mm in size, as a major shift in surgical resectability and patient survival occurs when the lesions increase in size from 20 to 30 mm. The median survival time of pancreatic cancer measuring ≤20 mm was 17.2 ± 8.2 months [3]. Moreover, according to the Japan Pancreatic Cancer Registry (JPCR), the 5-year survival rate of patients with lesions smaller than 1 cm and between 1–2 cm in diameter were 80.4% and 50.4%, respectively [4]. Therefore, we should diagnose small pancreatic cancer lesions measuring ≤20 mm for early surgical resection. Moreover, diagnosing these lesions while they are ≤10 mm in size leads to a better prognosis. However, only 0.8% patients with lesions smaller than 10 mm have been registered in JPCR [4].
For the diagnosis of pancreatic cancer, multidetector-row computed tomography (MDCT) and magnetic resonance imaging (MRI) are the two most commonly used imaging modalities. Endoscopic ultrasonography (EUS) is thought to be one of the most reliable and efficient diagnostic modalities for pancreatobiliary diseases because it is superior to any other modality with respect to spatial resolution [5,6]. Despite its detection capabilities, conventional EUS has a limitation in characterizing pancreatic lesions because most pancreatic solid lesions appear as hypoechoic lesions. Therefore, contrast-enhanced harmonic EUS (CH-EUS) is one way to improve the ability to characterize pancreatic lesions with evaluation of vascularity. In fact, Kitano et al. reported a depiction of hypoenhancement on CH-EUS diagnosed pancreatic cancer with a sensitivity (95%) and specificity (89%) on the largest series of 277 subjects [7]. This data demonstrated the usefulness and high diagnostic ability of CH-EUS in diagnosing pancreatic cancer.
Therefore, in this study, we evaluated the diagnostic ability of CH-EUS for pancreatic cancer, in comparison to MDCT and MRI, as they have been commonly used in the clinical management of small pancreatic cancers.

Patients with a pancreatic solid lesion measuring ≤20 mm who underwent surgery after undergoing evaluation with all three image modalities (CH-EUS, MDCT, and MRI) between March 2010 and June 2018 were enrolled in this study. Only surgical cases were included in this study for accurate tumor size determination based on histological measurement of specimens. Therefore, the final diagnosis was based on the histopathology of the surgical specimens in all cases. The lesion size was calculated based on measurements of the surgical specimen. Patients were divided into two groups according to the final diagnosis: pancreatic cancer and non-pancreatic cancer. The inclusion criteria were as follows: (1) patient age older than 20 years; (2) pancreatic solid lesion measuring ≤20 mm; (3) all three imaging modalities were performed; (4) pathological diagnosis with resected specimens was obtained; and (5) surgery was performed on pancreatic solid lesions. The exclusion criteria were as follows: (1) inability to carry out any of the imaging modalities and (2) inability to perform a pancreas screening with EUS due to surgical altered anatomy. The patients were divided into two groups based on lesion size (11–20 mm and ≤10 mm) for analysis. This study was approved by the ethics committee of Wakayama Medical University (No. 2458). Informed consent was obtained from each patient.

This study was a retrospective observational study performed at Wakayama Medical University Hospital. The primary outcome measurement was to evaluate the diagnostic ability of CH-EUS versus MDCT and MRI in diagnosing small pancreatic cancers.

EUS (GF-UE260-AL5, GF-UCT260; Olympus, Tokyo, Japan) with ultrasound observation systems (ALOKA ProSound SSD α-10; Aloka Co. Ltd, Tokyo, Japan) was performed under sedation. Fundamental B-mode EUS was initially performed. After using the fundamental B-mode, CH-EUS was performed for the differential diagnosis of the pancreatic lesion. CH-EUS was performed with the extended pure harmonic detection method for which the mechanical index was set at 0.35. Sonazoid (Daiichi Sankyo Co. Ltd., Tokyo, Japan) was used to perform CH-EUS. It is a second-generation ultrasonography contrast agent composed of perfluorobuthane microbubbles whose median diameter was 2–3 μm [8]. Vascular patterns were continuously assessed in real-time after infusion of contrast agent. Two endosonographers evaluated EUS images When there was a conflicting assessment between the two reviewers, they re-evaluated the data together until an agreement was reached. First, they evaluated whether a pancreatic nodule was present or not. Second, when a nodule was present, they evaluated whether the nodule was hypovascular compared to the surrounding tissue. Pancreatic cancer was defined as a hypovascular nodule on CH-EUS.

MDCT scans were performed initially without contrast on a 64 or 320 slice scanner (Aquilion; Canon Medical Systems Corporation, Tochigi, Japan). Two-millimeter sections were acquired in the peripancreatic area. Then, 1.6 mL/kg nonionic contrast material with an iodine concentration of 300 mgI/mL was injected with a fixed duration of 30 s. The arterial phase was initiated after the bolus tracking program detected the threshold enhancement of 200 HU in the aorta using an automatic bolus-tracking method. After administration, the pancreatic parenchymal, portal, and delayed phases were fixed at 15, 30, and 120 s, respectively. MDCT images were analyzed separately and independently by two expert radiologists. First, they evaluated whether a pancreatic nodule was present or not. Second, when nodule was present, they evaluated whether the nodule was hypovascular compared with the surrounding tissue. The pancreatic cancer was defined as a hypovascular nodule on MDCT. When there was a difference in assessment between the two reviewers, they re-evaluated the data together until an agreement was reached.

MRI was performed using a 3.0 Tesla machine (Achieva 3.0 T; Philips, Tokyo, Japan). Diagnosis was performed with coronal balanced steady-state free precession imaging (4 mm slices), coronal and axial T2-weighted single-shot fast spin-echo series (4 mm slices), fat-suppressed T2-weighted fast spin-echo series (3 mm to 3.5 mm slices), 3D heavily T2-weighted coronal MR cholangiopancreatography (1.8 mm slices), and axial diffusion-weighted imaging, including apparent diffusion coefficient (ADC) mapping (4 mm slices) using three b-values (b = 0, 50, and 1000 s/mm2). Two radiologists who were blinded to the results read the MR images. First, they evaluated whether pancreatic nodule was present or not. Second, when a nodule was present on MRI, they evaluated the nodule based on diffusion-weighted imaging. When a nodule had an increased signal intensity on diffusion-weighted images, with high b values and relatively low ADC values, the lesion was diagnosed as pancreatic cancer. When there was a difference in assessment between the two reviewers, they re-evaluated the data together until an agreement was reached.

In terms of comparison for diagnostic ability among imaging modalities, the p value < 0.017 was considered to denote statistical significance according to Bonferroni correction for 0.05 decision threshold. Fisher’s exact test was used compare diagnostic ability of cancer based on size. A difference was considered significant when the p value was less than 0.05. Statistical analysis was performed with JMP Pro version 13 (SAS Institute Inc., Cary, NC, USA).

This research did not receive specific funding. 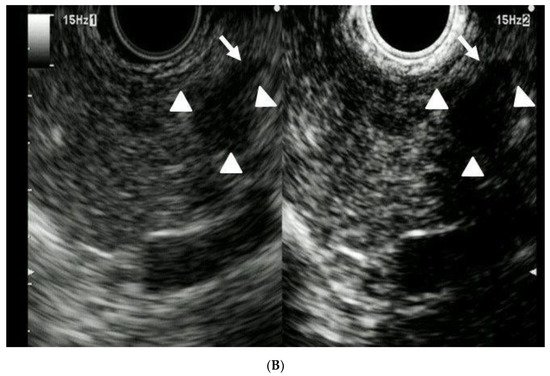 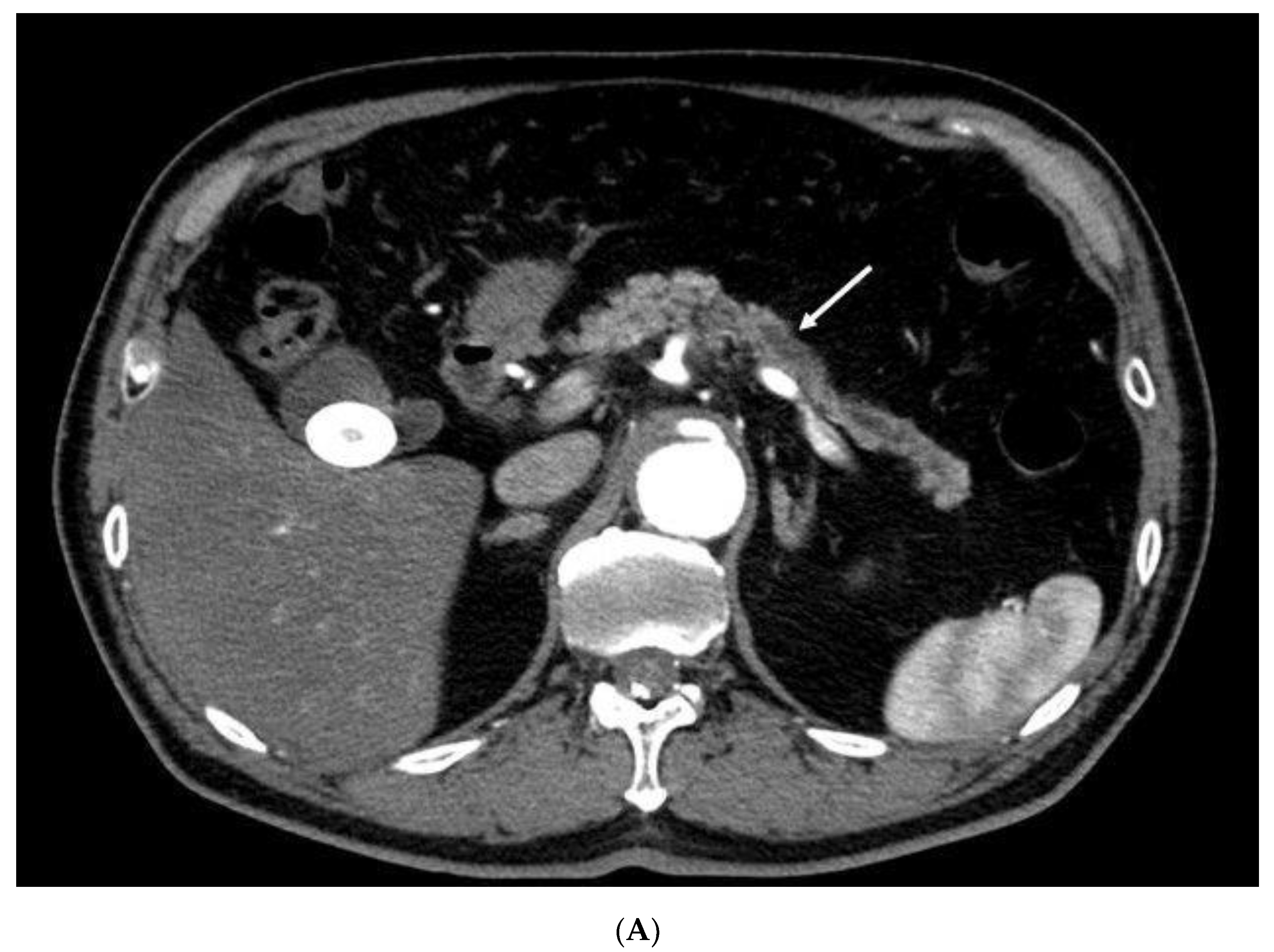 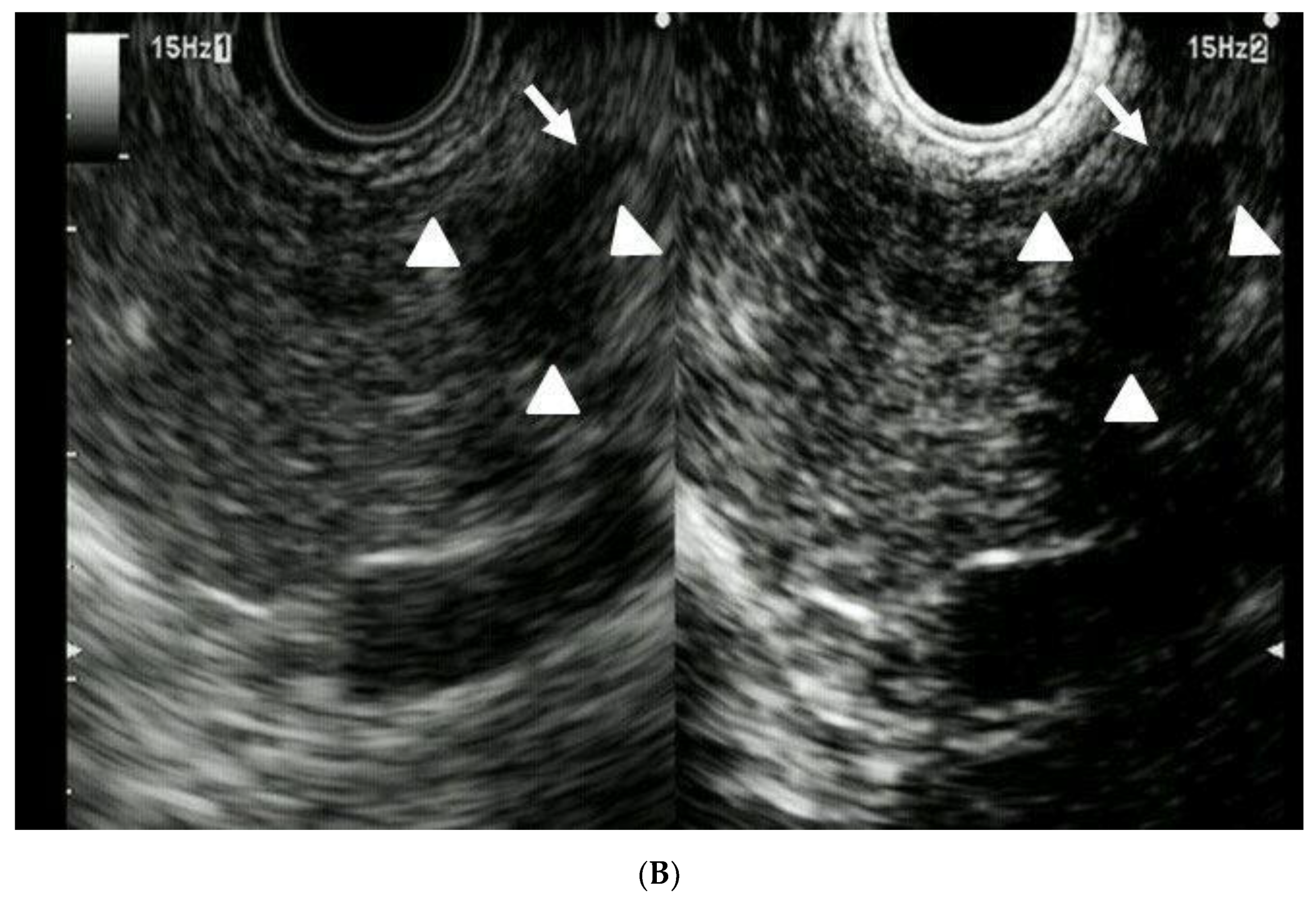