Nitrogen Starvation Acclimation in Synechococcus elongatus: Redox-Control and the Role of Nitrate Reduction as an Electron Sink
Next Article in Special Issue

Physical Routes to Primitive Cells: An Experimental Model Based on the Spontaneous Entrapment of Enzymes inside Micrometer-Sized Liposomes
Previous Article in Journal

From Vesicles to Protocells: The Roles of Amphiphilic Molecules

Coupled Phases and Combinatorial Selection in Fluctuating Hydrothermal Pools: A Scenario to Guide Experimental Approaches to the Origin of Cellular Life

Hydrothermal fields on the prebiotic Earth are candidate environments for biogenesis. We propose a model in which molecular systems driven by cycles of hydration and dehydration in such sites undergo chemical evolution in dehydrated films on mineral surfaces followed by encapsulation and combinatorial selection in a hydrated bulk phase. The dehydrated phase can consist of concentrated eutectic mixtures or multilamellar liquid crystalline matrices. Both conditions organize and concentrate potential monomers and thereby promote polymerization reactions that are driven by reduced water activity in the dehydrated phase. In the case of multilamellar lipid matrices, polymers that have been synthesized are captured in lipid vesicles upon rehydration to produce a variety of molecular systems. Each vesicle represents a protocell, an “experiment” in a natural version of combinatorial chemistry. Two kinds of selective processes can then occur. The first is a physical process in which relatively stable molecular systems will be preferentially selected. The second is a chemical process in which rare combinations of encapsulated polymers form systems capable of capturing energy and nutrients to undergo growth by catalyzed polymerization. Given continued cycling over extended time spans, such combinatorial processes will give rise to molecular systems having the fundamental properties of life. View Full-Text
Keywords: protocells; hydrothermal fields; early evolution protocells; hydrothermal fields; early evolution
►▼ Show Figures 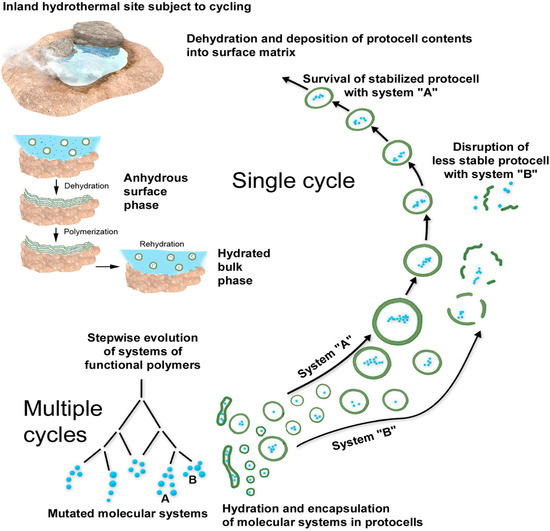