Coupled Phases and Combinatorial Selection in Fluctuating Hydrothermal Pools: A Scenario to Guide Experimental Approaches to the Origin of Cellular Life
Next Article in Special Issue

Phylogeny and Taxonomy of Archaea: A Comparison of the Whole-Genome-Based CVTree Approach with 16S rRNA Sequence Analysis
Previous Article in Journal

Archaeal Clusters of Orthologous Genes (arCOGs): An Update and Application for Analysis of Shared Features between Thermococcales, Methanococcales, and Methanobacteriales

Acetate kinase (ACK), which catalyzes the reversible phosphorylation of acetate by ATP, is a member of the acetate and sugar kinase/heat shock cognate/actin (ASKHA) superfamily. ASKHA family members share a common core fold that includes an ATPase domain with five structural motifs. The PHOSPHATE1 motif has previously been shown to be important for catalysis. We have investigated the role of two of these motifs in the Methanosarcina thermophila ACK (MtACK) and have shown that residues projecting into the ACK active site from the PHOSPHATE2 and ADENOSINE loops and a third highly conserved loop designated here as LOOP3 play key roles in nucleotide triphosphate (NTP) selection and utilization. Alteration of Asn211 of PHOSPHATE2, Gly239 of LOOP3, and Gly331 of ADENOSINE greatly reduced catalysis. In particular, Gly331, which is highly conserved throughout the ASKHA superfamily, has the greatest effect on substrate selection. Alteration at this site strongly skewed MtACK toward utilization of purines over pyrimidines, unlike the wild type enzyme that shows broad NTP utilization. Further investigation into differences between the ATPase domain in MtACK and other acetate kinases that show different substrate preferences will provide us with a better understanding of the diversity of phosphoryl donor selection in this enzyme family. View Full-Text
Keywords: acetate kinase; acetate; ATP; Methanosarcina acetate kinase; acetate; ATP; Methanosarcina
►▼ Show Figures 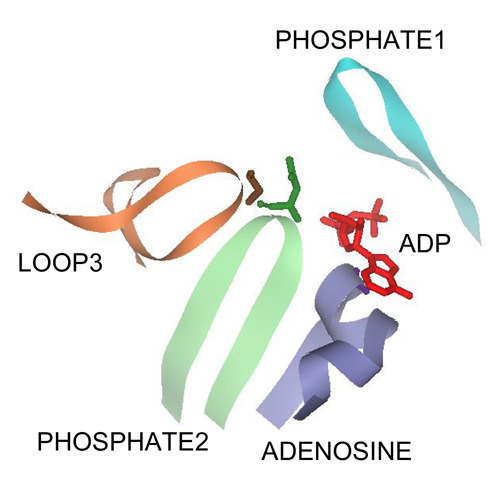