Quality of Life of the Elderly during the COVID-19 Pandemic in Asian Countries: A Cross-Sectional Study across Six Countries
Next Article in Special Issue

Next-Generation Molecular Discovery: From Bottom-Up In Vivo and In Vitro Approaches to In Silico Top-Down Approaches for Therapeutics Neogenesis
Previous Article in Special Issue

Role of Transposable Elements in Gene Regulation in the Human Genome

The most important sources of new components of genomes are transposable elements, which can occupy more than half of the nucleotide sequence of the genome in higher eukaryotes. Among the mobile components of a genome, a special place is occupied by retroelements, which are similar to retroviruses in terms of their mechanisms of integration into a host genome. The process of positive selection of certain sequences of transposable elements and retroviruses in a host genome is commonly called molecular domestication. There are many examples of evolutionary adaptations of gag (retroviral capsid) sequences as new regulatory sequences of different genes in mammals, where domesticated gag genes take part in placenta functioning and embryogenesis, regulation of apoptosis, hematopoiesis, and metabolism. The only gag-related gene has been found in the Drosophila genome—Gagr. According to the large-scale transcriptomic and proteomic analysis data, the Gagr gene in D. melanogaster is a component of the protein complex involved in the stress response. In this work, we consider the evolutionary processes that led to the formation of a new function of the domesticated gag gene and its adaptation to participation in the stress response. We discuss the possible functional role of the Gagr as part of the complex with its partners in Drosophila, and the pathway of evolution of proteins of the complex in eukaryotes to determine the benefit of the domesticated retroelement gag gene. View Full-Text
Keywords: molecular domestication; retroelements; Drosophila; evolution; stress response molecular domestication; retroelements; Drosophila; evolution; stress response
►▼ Show Figures 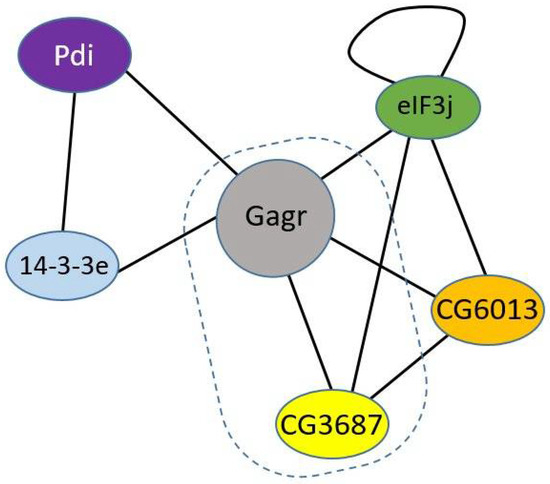