Mesenchymal Stem Cell-Derived Exosomes as an Emerging Paradigm for Regenerative Therapy and Nano-Medicine: A Comprehensive Review
Next Article in Special Issue

The Specificities of Elite Female Athletes: A Multidisciplinary Approach

Physical Activity and Bone Vascularization: A Way to Explore in Bone Repair Context?

:
Physical activity is widely recognized as a biotherapy by WHO in the fight and prevention of bone diseases such as osteoporosis. It reduces the risk of disabling fractures associated with many comorbidities, and whose repair is a major public health and economic issue. Bone tissue is a dynamic supportive tissue that reshapes itself according to the mechanical stresses to which it is exposed. Physical exercise is recognized as a key factor for bone health. However, the effects of exercise on bone quality depend on exercise protocols, duration, intensity, and frequency. Today, the effects of different exercise modalities on capillary bone vascularization, bone blood flow, and bone angiogenesis remain poorly understood and unclear. As vascularization is an integral part of bone repair process, the analysis of the preventive and/or curative effects of physical exercise is currently very undeveloped. Angiogenesis–osteogenesis coupling may constitute a new way for understanding the role of physical activity, especially in fracturing or in the integration of bone biomaterials. Thus, this review aimed to clarify the link between physical activities, vascularization, and bone repair.
Keywords:
physical activity; bone vascularization; angiogenesis; VEGF; bone repair

Physical activity is widely recognized as a biotherapy by WHO (World Health Organization) in the fight and prevention of bone diseases such as osteoporosis in older subjects [1]. Physical exercise-induced improvement in bone mineral density (BMD) has also been observed in young patients treated with glucocorticoids [2] or suffering from excessive alcohol consumption [3], both of these substances affecting bone viability. Exercise reduces the risk of disabling fractures associated with many comorbidities, and whose repair is a major public health and economic issue. It is classically accepted that physical activity in this context helps maintaining or increasing bone mass through mechanical stimulation [4,5] and systemic factors’ (hormones, growth factors, etc.) production [6]. Relevant mechanisms may also include an increase in vascularization within bone tissue, such as reported in previous studies that tend to show a link between the processes of angiogenesis, vascularization foundation, and osteogenesis involved in bone tissue formation [7].
Hypothesis:
As physical activity improves vascularization, it also improves bone healing.
Thus, physical activity could promote the link between angiogenesis and osteogenesis through both the compressions generated and the growth factors produced. The effects of exercise on these parameters require, however, further investigations [7]. Finally, in the treatment of osteoporosis, particular attention should be paid to the effects of physical activity on bone defect or fracture repair processes that take place in the osteoporotic bone. Although vascularization is highly involved in the bone repair process, studies demonstrating the preventive/curative effects of physical activity on bone repair have not investigated the contribution of vascularization to these effects specifically. Such studies are probably hindered, at least in humans, by the complexity of the approach and visualization of the results. That being said, the role of physical activity on the vascularization and repair of skeletal muscles or cardiovascular tissues is no longer to be demonstrated, which provides sound grounds for hypotheses to explore in a bone repair context.
The present work is at a crossroads: (1) It outlines the role of physical activity in the link between angiogenesis and osteogenesis in in vitro studies and pre-clinical animal model studies and (2) it proposes to expand these findings to the possible role of physical activity in the repair of non-critical-sized bone defects.

2. Physical Activities and Their Effects on Angiogenesis and Osteogenesis

3. Some Growth and Transcriptional Factors Involved in Osteogenesis/Angiogenesis Induced by Physical Activity

Few studies have focused on the impact and evolution of vascularization in bone repair. Fractures are the most common large-organ, traumatic injuries to humans with, however, a very high regeneration capacity [81,82]. As for the development of bone, bone fracture healing is a complex multistep process. It starts with the formation of a hematoma around the fractured region of the bone and involves cytokine-secreting inflammatory cells for forming a fibrinous clot [17,83]. In the early callus, mesenchymal stem cells differentiate into chondrocytes, which further promote vascularization and bone formation through the secretion of several proteins (BMPs, MMP-13, alkaline phosphatase, VEGF, and placental growth factor). Chondrocytes in the callus also release anti-angiogenic factors, which limit blood vessel growth [84]. Additionally, the vascular network is essential for proper bone formation and functional bone restoration [17,18,85,86,87,88,89]. If blood flow is impaired, bone healing and repair may be delayed [90]. Indeed, it is admitted that the presence of blood vessels is critical for a successful bone regeneration [91,92]. The lack of blood supply induces local hypoxia, which may be maintained by subsequent inflammation [93]. The observed pO2 (partial pressure of oxygen) post-fracture is 1–3% [88]. This trauma-induced hypoxia causes endothelial cells (ECs) to upregulate bone morphogenic proteins (BMPs; i.e., BMP-2) to promote osteogenesis [17,89]. The hypoxia-induced transcription factor (HIF)-α pathway, activated in hypoxia, is considered a key mechanism for coupling bone growth to angiogenesis via increased expression of VEGF, the major vascular growth factor expressed by hypoxic osteoblasts [88]. In mice, where HIFα is overexpressed, the bones are highly vascularized [94]. In addition, the placental growth factor (PlGF, a VEGF homologue), which acts through the VEGF receptor, also appears to play a significant role in fracture healing [93]. VEGF stimulates the regrowth of blood vessels into the injury site, so that oxygen and nutrient levels return to normal values [88]. The general pattern for bone healing consists in a recruitment of osteoclasts in the early hypoxic phase, while revascularization progressively favors osteoblast function (proliferation, differentiation, and bone formation). Osteoblast precursors could also move into fractured bones concomitant with the invasion of the blood vessels [83]. Additionally, osteoblasts accumulate HIF-1a, leading to VEGF-A production, which further enhances angiocrine BMP production [84,89,94,95,96]. As for embryonic bone development, fibroblast growth factors (FGFs) are also required for bone repair. In Behr et al.’s study (2011), mice with heterozygous FGF9 loss, neovascularization, and cortical repair were reduced, in part due to reduced VEGF-A, and after a combined administration of FGF9 and VEGF-A the defect was significantly reduced [97]. Further, Kigami et al. (2013) showed that FGF-2 enhanced angiogenesis in rat calvarial critical-sized bone defects [68]. Even if knowledge has yet to be widely developed, other molecular processes are also involved. For example, some works highlight the central roles of Notch signaling in bone endothelium and its regulation by blood flow, which is relevant for age-related bone loss and, potentially, for therapeutic approaches aiming at the maintenance or restoration of bone mass. Notch pathway genes are highly expressed in arterial ECs, which are exposed to high flow rates and shear stress [17,34]. Based on the principle that active blood supply is essential for callus formation during fracture healing and repair [86], methods to artificially increase blood flow during early steps of repair are used as treatment [84]. However, the relationship between angiogenesis and bone repair may be more nuanced. This suggests a more complex balance or interplay between pro- and anti-angiogenic factors in the healing process.
Recently, it has been shown that preventive moderate continuous running-exercise conditioning could improve the healing of non-critical-sized bone defects in male Wistar rats [98]. In another study, mice were put in cages that were supplied with running wheels after a cranial bone window. Spontaneous physical activity promoted angiogenesis during bone repair in this model over a time period of 21 days [99].

In conclusion, it is now well established in the literature the importance of good bone vasculature for the preservation of bone integrity. Furthermore, different physical exercise modalities have been identified by their angiogenic and osteogenic improvements in humans and animals. However, the mechanisms coupling angiogenesis and osteogenesis in response to an exercise modality are still poorly understood. This provides an opportunity for new descriptive but also analytical scientific studies to shed light.
Finally, a deeper knowledge of the mechanisms involving physical exercise used in preventive or curative mode in the revascularization of bone could open new fields of use and investigation both in the repair of fractures and as a complement in the use of bio-materials for defects of critical size. 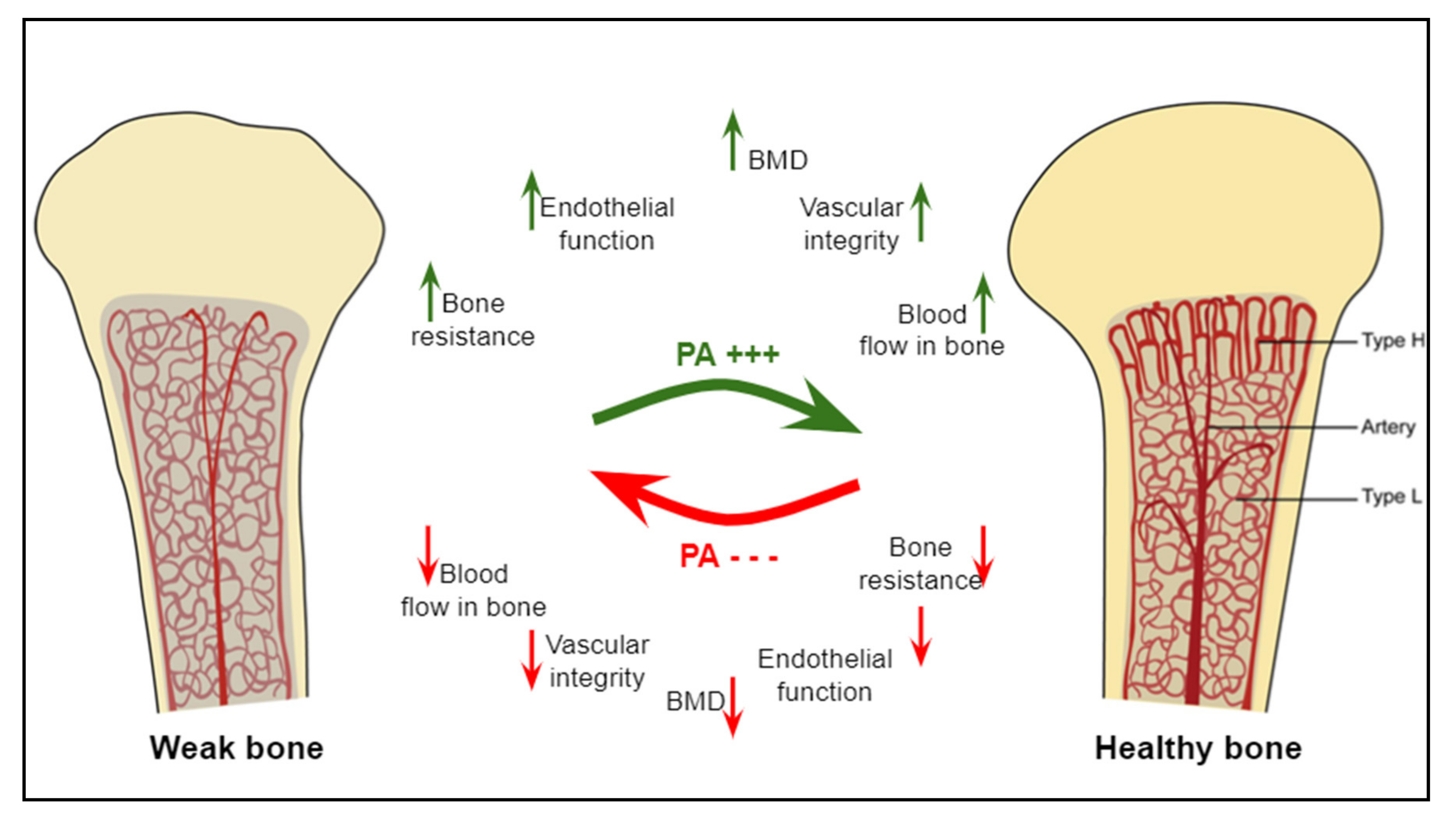