The Core of Gut Life: Firmicutes Profile in Patients with Relapsing-Remitting Multiple Sclerosis
Next Article in Special Issue

Hibernation as a Tool for Radiation Protection in Space Exploration

With new and advanced technology, human exploration has reached outside of the Earth’s boundaries. There are plans for reaching Mars and the satellites of Jupiter and Saturn, and even to build a permanent base on the Moon. However, human beings have evolved on Earth with levels of gravity and radiation that are very different from those that we have to face in space. These issues seem to pose a significant limitation on exploration. Although there are plausible solutions for problems related to the lack of gravity, it is still unclear how to address the radiation problem. Several solutions have been proposed, such as passive or active shielding or the use of specific drugs that could reduce the effects of radiation. Recently, a method that reproduces a mechanism similar to hibernation or torpor, known as synthetic torpor, has started to become possible. Several studies show that hibernators are resistant to acute high-dose-rate radiation exposure. However, the underlying mechanism of how this occurs remains unclear, and further investigation is needed. Whether synthetic hibernation will also protect from the deleterious effects of chronic low-dose-rate radiation exposure is currently unknown. Hibernators can modulate their neuronal firing, adjust their cardiovascular function, regulate their body temperature, preserve their muscles during prolonged inactivity, regulate their immune system, and most importantly, increase their radioresistance during the inactive period. According to recent studies, synthetic hibernation, just like natural hibernation, could mitigate radiation-induced toxicity. In this review, we see what artificial hibernation is and how it could help the next generation of astronauts in future interplanetary missions. View Full-Text
Keywords: hibernation; torpor; space; radiation protection; genomic instability; brain function; cardiovascular function; immune function hibernation; torpor; space; radiation protection; genomic instability; brain function; cardiovascular function; immune function
►▼ Show Figures 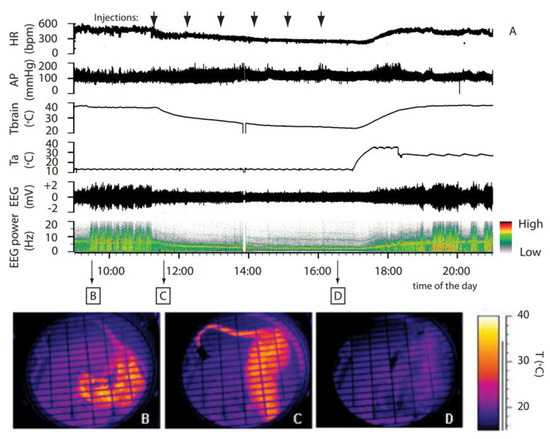