Adiposity in Depression or Depression in Adiposity? The Role of Immune-Inflammatory-Microbial Overlap
Next Article in Special Issue

Hibernation as a Tool for Radiation Protection in Space Exploration

:
The use of high linear energy transfer (LET) ionizing radiation (IR) is progressively being incorporated in radiation therapy due to its precise dose localization and high relative biological effectiveness. At the same time, these benefits of particle radiation become a high risk for astronauts in the case of inevitable cosmic radiation exposure. Nonetheless, DNA Damage Response (DDR) activated via complex DNA damage in healthy tissue, occurring from such types of radiation, may be instrumental in the induction of various chronic and late effects. An approach to elucidating the possible underlying mechanisms is studying alterations in gene expression. To this end, we identified differentially expressed genes (DEGs) in high Z and high energy (HZE) particle-, γ-ray- and X-ray-exposed healthy human tissues, utilizing microarray data available in public repositories. Differential gene expression analysis (DGEA) was conducted using the R programming language. Consequently, four separate meta-analyses were conducted, after DEG lists were grouped depending on radiation type, radiation dose and time of collection post-irradiation. To highlight the biological background of each meta-analysis group, functional enrichment analysis and biological network construction were conducted. For HZE particle exposure at 8–24 h post-irradiation, the most interesting finding is the variety of DNA repair mechanisms that were downregulated, a fact that is probably correlated with complex DNA damage formation. Simultaneously, after X-ray exposure during the same hours after irradiation, DNA repair mechanisms continue to take place. Finally, in a further comparison of low- and high-LET radiation effects, the most prominent result is that autophagy mechanisms seem to persist and that adaptive immune induction seems to be present. Such bioinformatics approaches may aid in obtaining an overview of the cellular response to high-LET particles. Understanding these response mechanisms can consequently aid in the development of countermeasures for future space missions and ameliorate heavy ion treatments.
Keywords:
microarrays; high-LET; space radiation; differential gene expression; meta-analysis; computational radiobiology; DNA damage response; functional enrichment analysis

Our analysis can be summarized in a workflow (Figure 1). It commenced with a microarray data search conducted in public repositories and concluded with a functional enrichment analysis performed on statistically significant DEGs derived from 3 separate meta-analyses.

The search for our microarray data was conducted in Gene Expression Omnibus (GEO) [58] of the National Center for Biotechnology Information (NCBI), which serves as a public repository for gene expression data, in compliance with the requirements of Minimal Information About Microarray Experiments (MIAME) [59] and ArrayExpress [60] as a basic functional genomics data archive of the European Molecular Biology Laboratory—European Bioinformatics Institute (EMBL-EBI). Our selection criteria involved single-channel cDNA microarray experiments using human tissue samples, irradiated with high-LET HZE radiation. To this end, an advanced search of GEO was formulated as: (([(“expression profiling by array” [DataSet Type]) AND radiation, ionizing [MeSH Terms]] AND high LET[Description]) OR HZE[Description]) AND “Homo sapiens” [porgn], which yielded 8 data series. Subsequently, the two queries performed in ArrayExpress that yielded 2 additional datasets were: “ionizing radiation” AND “high-LET” and “ionizing radiation” AND “high LET”. Finally, datasets were manually curated in order to exclude non-irradiated, UV-irradiated and tumor samples, thus concluding in 3 data series.

DEG lists from the three (3) data series were further combined in three (3) separate meta-analyses to identify genes of differential expression within and across studies. In order to achieve optimal results, DEG lists were sorted into 3 groups (Table 1) depending on radiation type, radiation dose and time of collection post-irradiation before being subjected to a meta-analysis.
Our meta-analysis method combined unadjusted p-values of each study for every gene, using a weighted version of Stouffer’s meta-analysis [66], proposed by Mosteller and Bush [67], as previously described [68]. For each gene and study, its two-tailed unadjusted p-value was converted into a one-tailed p-value, based on the sign of the corresponding Log2FC. For each one-tailed p-value, the corresponding z-score was calculated using the inverse normal distribution function (Φ−1). The meta-analysis p-value for each gene was calculated, as shown in Equation (1) from the weighted z-score sum, using the normal distribution function (Φ) [67]: where pi is the eBayes-derived p-value, ni is the number of samples of study i and k is the number of studies. Finally, p-values underwent FDR adjustment and 0.01 was selected as the threshold for statistical significance.

Our meta-analyses resulted in 3 final DEG lists, with the statistical significance cutoff for differential expression set to an adjusted p-value of <0.01. Consequently, each list was divided into up- and downregulated genes that were subjected to functional enrichment analysis in WebGestalt [56] using the Over-Representation Analysis (ORA) method [69]. As reference gene sets for biological processes and pathways, we selected Gene Ontology (GO) terms [70] and the KEGG, Reactome, Panther and WikiPathways databases [71,72,73,74], respectively. The statistical significance of each over-representation of biological term or pathway was estimated using hyper-geometric distribution and finally p-values were FDR-adjusted in order to distinguish terms with adjusted p-values of <0.01 as statistically significant.
Towards investigating the interactome of our three DEG lists and identifying possible underlying cell mechanisms, we constructed their protein–protein interaction (PPI) network, using STRING.db (v.11.0) [57]. The edges of the network, corresponding to protein interactions, were determined based on text mining and experimental sources with the highest confidence (Table A1).

Queries performed in GEO and ArrayExpress identified ten (10) data series that fulfilled our search criteria. After manual curation, the repository accession numbers of the selected datasets were GSE63952 [75], E-MTAB-5754 [76], E-MTAB-3463 and E-MTAB-5761. Subsequently, we downloaded the corresponding CEL files containing raw expressions and CDF files from Brainarray (v.24). Finally, we selected samples that could be further combined in a meta-analysis (Table 2).

Our data series contained combinations of experimental conditions; therefore, were split into distinct studies (Table 3) before performing DGEA. The cutoff for statistical significance in differential expression was set as an FDR adjusted p-value of <0.05. Additionally, samples collected 7 days post-irradiation and samples exposed to 0.1 Gy of X-rays from data series E-MTAB-5754 and E-MTAB-3463, respectively, were excluded from the analysis, as they could not be sorted into a meta-analysis group. Finally, samples exposed to low doses of γ-rays from data series GSE63952 were also omitted.
After conducting the meta-analyses using the corresponding unfiltered gene lists derived from DGEA in R for each group (Figure 2), we acquired the final DEG lists by selecting the cutoff of an adjusted p-value of <0.01 (Table 4). In addition, statistically significant differentially expressed genes were divided into up- and downregulated, in order to perform functional enrichment analysis. Finally, an initial investigation for possible differentiation in expression patterns after exposure to low- and high-LET radiation was performed through Venn diagram creation (Figure 3).

Functional enrichment analysis of up-and downregulated genes resulting from the three meta-analyses produced lists of statistically significant GO biological processes and biological pathways with a selected FDR cutoff of 0.01 (Supplementary Materials, Tables S2–S4). The enriched gene sets exhibit a level of repeatability due to the selection of reference gene sets from multiple databases, as well as the variety of gene sets that indicate the same group of biological processes or pathways. Thus, we selected the gene sets with the lowest FDR value among biologically related processes and pathways to be presented (Table 5, Table 6 and Table 7) in order to avoid redundant enriched terms. PPI networks of DEGs for each meta-analysis group were also constructed (Figure 4, Figure 5 and Figure 6).

All primary omics datasets used and analysis results are included in the manuscript but available also on logical request. 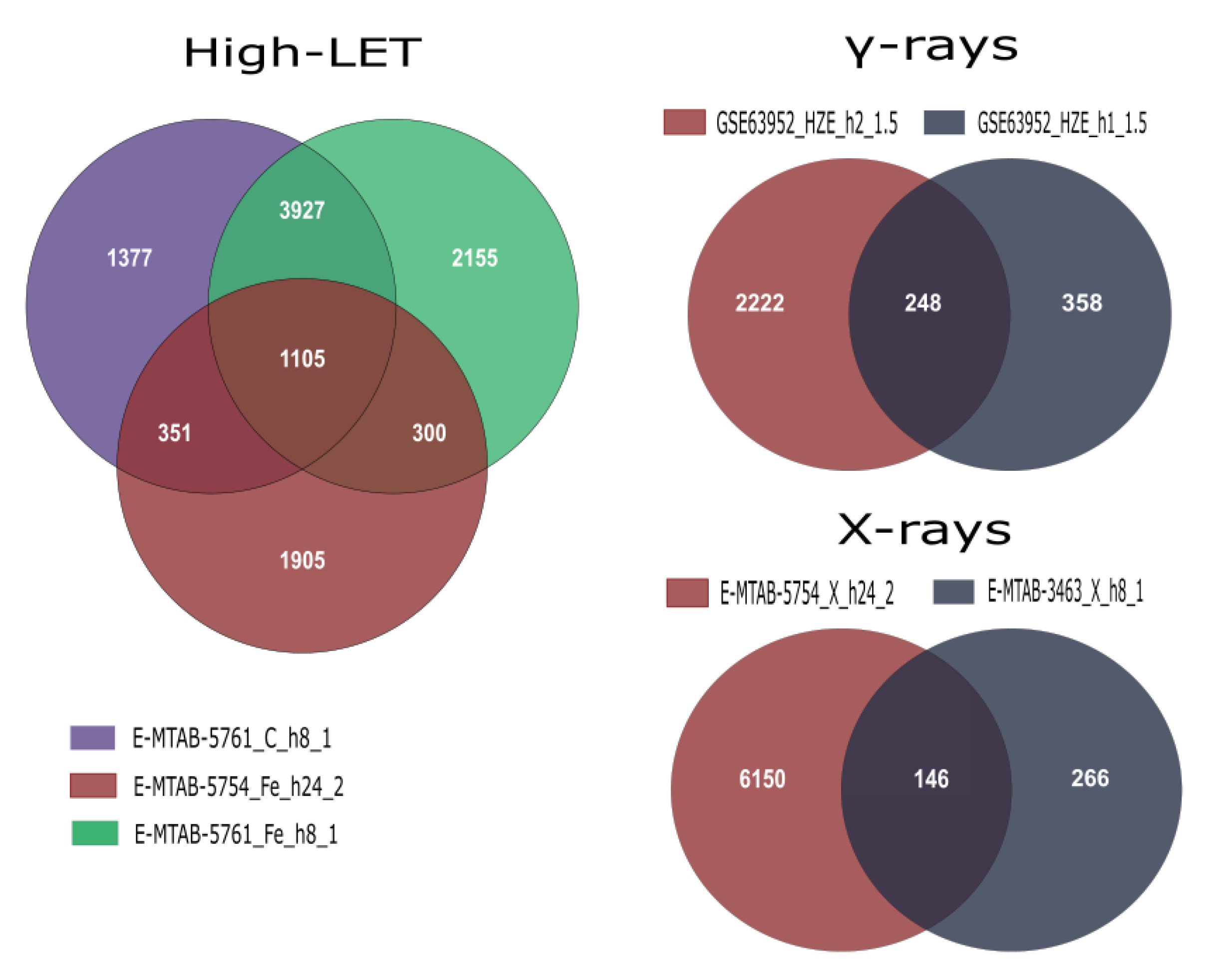 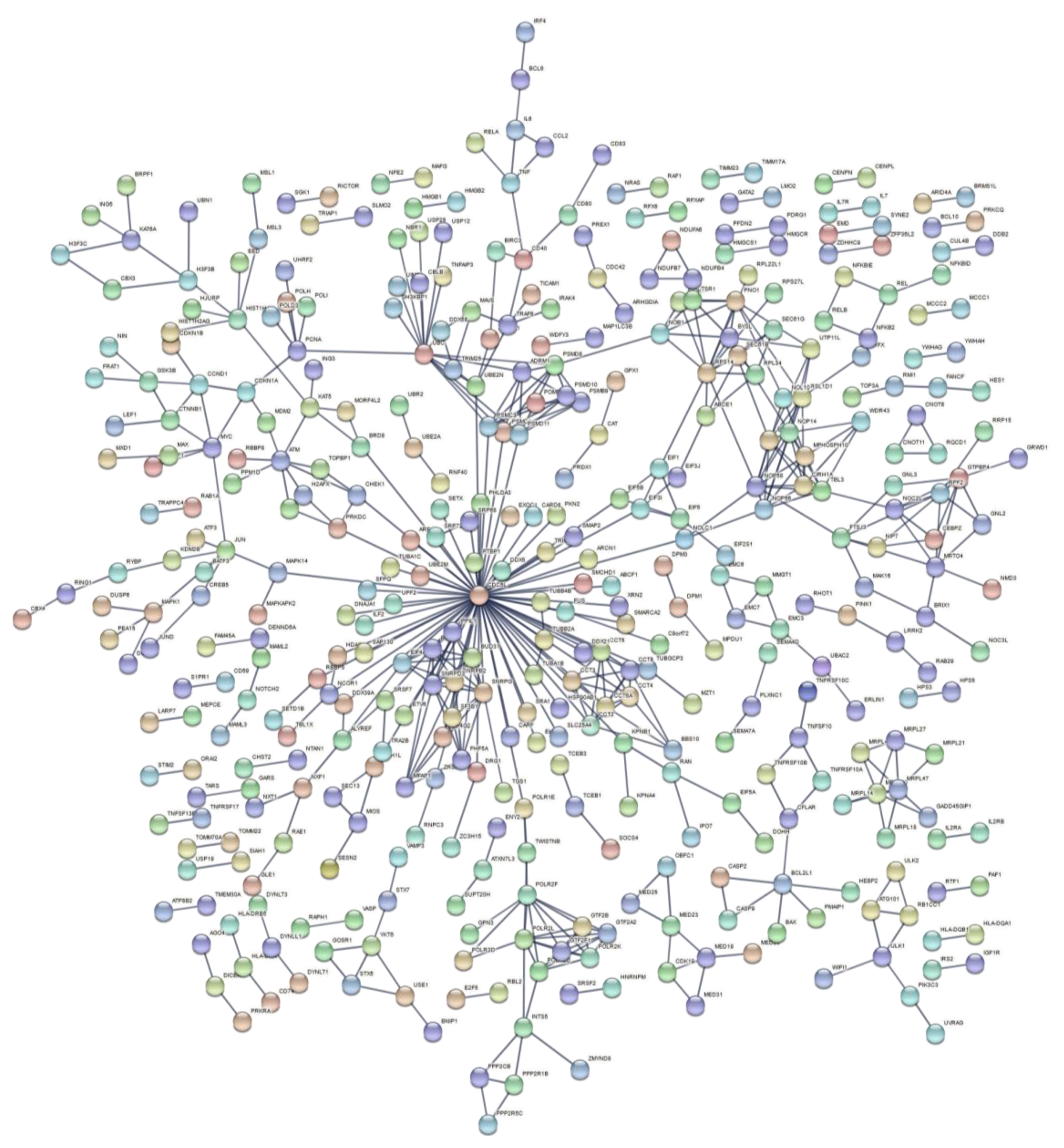