The enactment of the Hemp Farming Act, effectively beginning in 2019, was a monumental milestone in the history of Cannabis prohibition in the United States (U.S.), because it enabled the legal consumption, commercial production, and market trade of any type of product made from certain variants of the Cannabis plant. Only differing from their federally illegal counterparts, arbitrarily defined as Cannabis plants containing over 0.3% tetrahydrocannabinol (THC) potency levels, the legal variety of the Cannabis plant—conventionally referred to as ‘hemp’—still contains hundreds of additional phytochemicals, including cannabinoids (e.g., cannabidiols, CBDs), terpenes, terpenoids, and flavonoids that may offer potent therapeutics, both individually and synergistically [1,2,3,4]. Despite widespread Cannabis usage in the U.S., with estimated annual revenues now in the tens of billions of dollars, current patients and providers still have little scientific evidence on the likely effectiveness of common and commercially available cannabis-based products for pharmaceutical application. This is because the federal government has largely limited clinical investigations to plant-inspired isolates, concocted formulants, or synthetic analogues not representative of the whole, natural Cannabis plant-based products most widely used by millions of people in the U.S. [5,6]. Another frequent and unavoidable limitation of extant human trials measuring Cannabis’ pharmacodynamics is that they cannot control for placebo and expectancy effects, or visceral, perceptual, and/or cognitive reactions to enrollment in a cannabis-themed experiment, with several studies observing Cannabis-related experiences reported by both active agent and placebo group participants [7,8].
While animal models can control for expectancy effects, few paradigms have created a persistent state of chronic pain, with the majority of conventional pain models resulting in a recoverable, and hence qualitatively different forms of pain than one that is ‘chronic’ in nature, and hence often and uniquely tethered with comorbid affective disturbances (e.g., depression) [9,10]. One well-established and reliable chronic pain model, the Foramen Rotundum Inflammatory Constriction Trigeminal Infraorbital Nerve injury (FRICT-ION) model involves an insertion of 3 mm of chromic gut suture (4-0) along the maxillary branch as it passes into the foramen rotundum through a tiny scalpel incision in the buccal/cheek crease [11]. Mechanical hypersensitivity reliably develops on the snout persisting through >100 days, likely due to consistent inflammatory response caused in part by movement of the nerve during chewing. The extended 3–10 week timeframe for study allowed by the FRICT-ION model is reportedly equivalent to 5–8 years of chronic pain in clinical patients [12,13].
Studies examining the neuropharmacology of neuropathic pain have implicated opioid (e.g., MOP/DOP) [14,15,16], serotonin (e.g., 5-HT7) [17,18], dopamine (e.g., D2) [19,20] and glutamate (e.g., GluN2B) [21,22,23] receptor systems as potential therapeutic targets; however, no studies to date have examined the effects of whole plant-extracted hemp oil on chronic pain. Therefore, in the present study, we investigated the analgesic effects of “full-spectrum” whole plant oil extracted from the hemp plant, using ethanol and evaporation-based procedures commonly used in the Cannabis industry, on mechanical neuropathic chronic pain sensitivity in mice. By creating a continuous state of irritation in the infraorbital nerve, the FRICT-ION mouse model of chronic orofacial neuropathic pain can initiate mechanical allodynia in the mouse whisker pad for pharmaceutical investigation. We use a standard von Frey test for mechanical hypersensitivity at 7 weeks post-surgery to measure the effects of orally administered hemp oil over a 6 h observation window, in comparison to vehicle only and naïve control mice, to estimate the general efficacy of commonly used hemp-based products for therapeutic application.

The general experimental plan is shown in Figure 1.
Model induction began 1 week after acclimatization of the male mice. The animals were tested weekly for mechanical sensitivity with von Frey fibers applied to the whisker pad. Hypersensitivity was induced within the first week and continued indefinitely. After the week 7 testing, mice with FRICT-ION nerve compression neuropathic pain were given either hemp oil mixed in peanut butter (0.138 mg/kg) or peanut butter alone. Naïve control mice received weekly behavioral testing.

Subjects were 12 male BALBc mice (20–30 g, Envigo) housed in the animal housing facility of the University of New Mexico Health Science Campus. Mice were housed in groups of 3 per cage, with food and water available ad libitum, in a temperature-controlled room (23 °C) under a reversed 12 h/12 h light/dark cycle (lights on at 7:00 PM). The mice were transported to the experimental room in their home cages and left undisturbed for 1 h prior to testing. All efforts were made to minimize animal stress and suffering, and to reduce the number of mice used. The experiment received formal approval from the Committee on Animal Research and Ethics, Health Sciences Center, University of New Mexico (IACUC #17-200613). The experiment reported in this article was performed in accordance with the recommendations of the United States National Institutes of Health Guide for the Care and Use of Laboratory Animals and the guidelines of the Committee for Research and Ethical Issues of the International Association for the Study of Pain [24].

2.3. Surgical Procedures for Induction of the Model

The surgical model induction has been described in detail previously [11]. Briefly, mice were anesthetized with isoflurane (2%) and then a small surgical incision was made orally between the cheek and maxillary bone. A chromic gut suture (4.0, 3 mm) was inserted into the tight space between the infraorbital (ION) trigeminal nerve branch and the bony foramen rotundum as the nerve enters the skull. The anesthesia and surgery took less than 5 min. All surgeries were performed in sterile conditions under a surgical microscope.
Whisker pad hypersensitivity developed reliably and persisted for at least 3 months [11,25]. In sham operations reported in a previous full description of the procedure, the ION was exposed but not compressed [11]. All animals underwent weekly behavioral testing to confirm mechanical threshold level and sham animals responded like naïve animals after recovery from the sham surgery (Figure 1 and Figure 2A). Estimates are that in week 8, mice had experienced pain equivalent to several human years and can be considered chronic [12,13]. Group comparisons included naïve and neuropathic pain groups, with and without hemp oil. All studies were blinded.

Post-surgery mechanical sensitivity of the whisker pad was determined in the infraorbital nerve receptive field with a series of 8 von Frey fiber filaments (0.008 g (1.65); 0.02 g (2.36); 0.07 g (2.83); 0.16 g (3.22); 0.4 g (3.61); 1.0 g (4.08); 2.0 g (4.31); 6.0 g (4.74); Stoelting, Wood Dale, IL, USA) by the modified up-down method [26]. Mice were handled several times before experiments and were trained in the procedure for one week prior to the actual test. The experimenter held the mouse with a cupped hand until the animal was calm. Mice moved freely in the holder’s hands with its head exposed. During testing, the experimenter slightly restrained the mouse in their hand while accurately applying the von Frey filament onto the center of the mouse whisker pads, both ipsilateral and contralateral to the surgery site. For the consistency of results, each filament was applied five times at intervals of a few seconds. If head withdrawal was observed at least three times after probing with a filament, the mouse was considered responsive to that filament according to the up-down method [26]. For this approach, whenever a positive response to the mechanical stimulus occurred, the next weaker von Frey filament was applied. If no positive response was evoked, the next stronger filament was applied. Testing proceeded in this manner until four fibers applied after the first one successfully caused positive responses. This allowed estimation of the 50% mechanical withdrawal threshold (in grams force) using a curve-fitting algorithm. Baseline assessment of nociception was done in week 2 after acclimatization. After surgical induction of the FRICT-ION model, testing for hypersensitivity was done once weekly through to week 12.

Prior to testing the effects of hemp oil on the behavioral changes, mechanical allodynia was confirmed in the mice in weeks 1–6 after induction of the nerve trauma and re-tested in week 7, prior to the experiment (Figure 2A). The mechanical pain threshold was measured hourly (0–6 h) following dosing among animals exposed to 5 μL of hemp oil dissolved in peanut butter as the vehicle (0.138 mg/kg; n = 6), the peanut butter vehicle alone (n = 3), or a naïve control condition (n = 3) (Figure 2B). The naïve mice underwent all procedures and tests except the surgery. The animals immediately ate the peanut butter with or without the hemp oil. The mechanical threshold on the whisker pad on the side of the inflamed nerve and on the contralateral side was assessed hourly after consumption for 6 h.

The hemp oil was cultivated by Organic-Energetic Solutions LLC (Albuquerque, NM, USA) and commercially available under the “LyFeBaak” label. The oil is derived from “Cherry Blossom” hemp plants that have been cultivated using proprietary methods that hypermineralize the plants throughout the vegetative and flowering phases of cultivation. The cannabinoid and terpene analytics of the Cherry Blossom plants used to produce the hemp oil are shown in Table 1 and Table 2, respectively. Mature Cannabis hemp buds were used in an alcohol bath extraction procedure using ethanol as a solvent. The procedure stripped the cannabinoids, terpenes, chlorophyll, fats, lipids and wax compounds from plant material by suspending those compounds in an alcohol solution form. The solution was then separated from the plant material using a strainer and the alcohol solution was further filtered until it was free of particulates. The alcohol was evaporated out of the solution, leaving a highly concentrated form of the botanical components harvested from the Cannabis plants, which was then combined with medium-chain triglyceride (MCT) oil in its final (retail) form. In the current study, 5 μL of hemp oil were combined with peanut butter (0.138 mg/kg) for the active agent group.

The naïve group of mice responded throughout the testing period only to von Frey fibers which apply 6.000 g force (blue line, Figure 2) (6.000 ± 0.000). This was considered the baseline response. The development and continuation of whisker pad hypersensitivity in the untreated group is shown in Figure 2A,B as the red line, indicating a response threshold to a von Frey fiber with minimal grams force (0.008 g) (0.067 ± 0.029). A repeated measures ANOVA showed a significant group–time interaction, F (2,9) = 17.65, p < 0.001). The treated group had the same response as the untreated group initially prior to the administration of the hemp oil, but the response reversed toward baseline stably between 2–4 h (Figure 2B green line). The response thresholds showed a bell-shaped dose-response curve in the treated group, but did not change over the 6 h observation period for the naïve and untreated groups (p > 0.10 in each case).
The results indicate the efficacy of the drug treatment in the chronic trigeminal neuropathic pain model. As shown in Figure 2B, mechanical withdrawal threshold assessment indicated relief from hypersensitivity following hemp oil treatment at 1 (d = 2.50, p < 0.001), 2 (d = 3.44, p < 0.001), and 6 h (d = 2.20, p < 0.001), with a peak reversal of allodynia at 4 h (d = 7.21, p < 0.001). No adverse events were observed.

The present study shows for the first time that common, commercially available, and easily reproducible full-spectrum hemp oil induces significant anti-allodynic effects with a bell-shaped pain sensitivity effect peeking between 2 and 4 h and lasting over 6 h. The study provides evidence that phytochemical extracts of the Cannabis plant, even with relatively low levels of THC, can significantly improve mechanical pressure pain in animals with established chronic neuropathic hypersensitivity.

These studies were funded by start-up funding to KNW by the University of New Mexico Anesthesiology Department Research Endowment.

We thank Steven Moore for his outstanding contributions to the overall vitality of the hemp used in the current study. 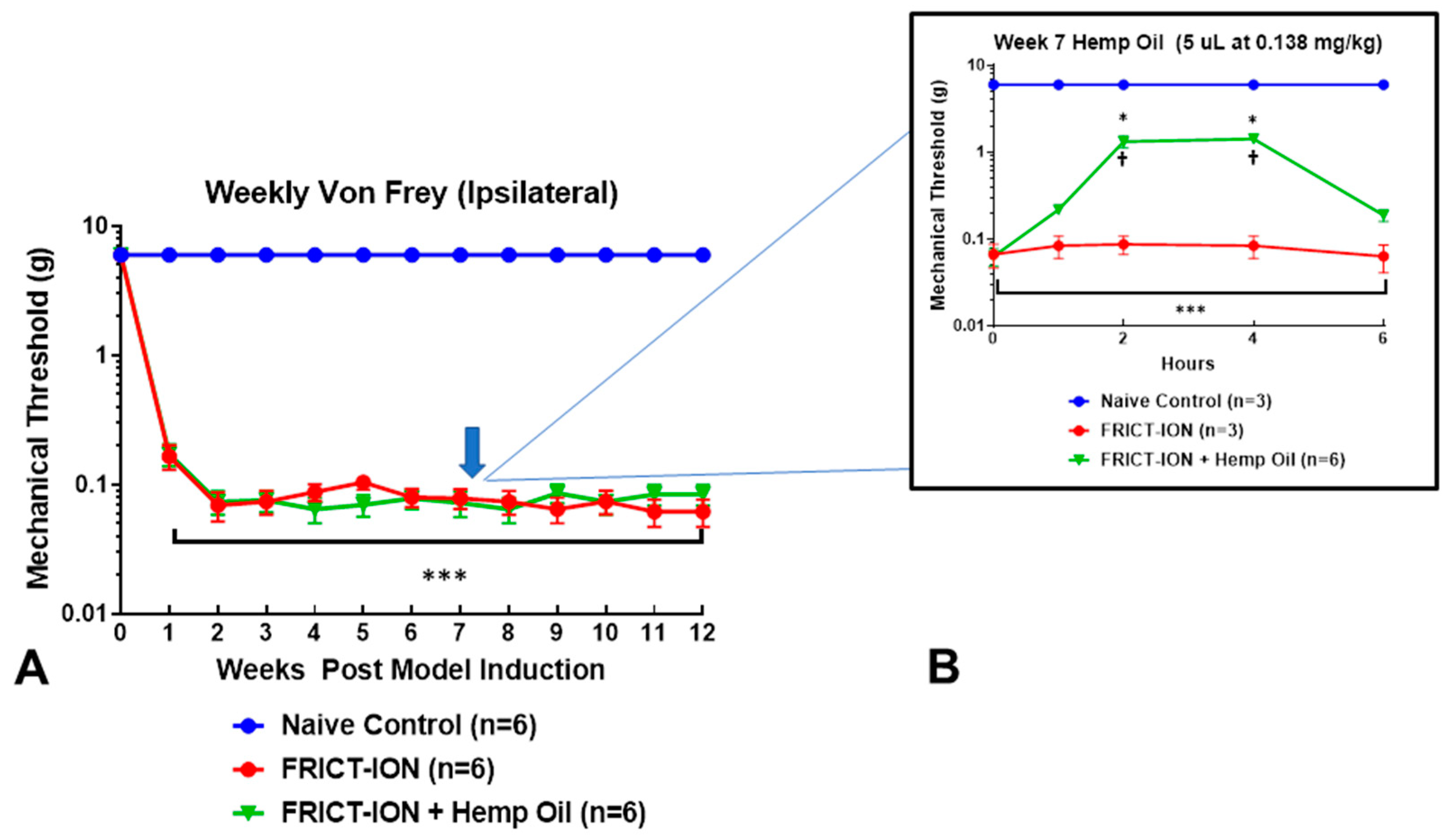