On the Role and Production of Polyhydroxybutyrate (PHB) in the Cyanobacterium Synechocystis sp. PCC 6803

Maternal obesity during pregnancy is associated with a greater risk of poor health outcomes in offspring, including obesity, metabolic disorders, and anxiety, however the incidence of these diseases differs for males and females. Similarly, animal models of maternal obesity have reported sex differences in offspring, for both metabolic outcomes and anxiety-like behaviors. The ventromedial nucleus of the hypothalamus (VMN) is a brain region known to be involved in the regulation of both metabolism and anxiety, and is well documented to be sexually dimorphic. As the VMN is largely composed of glutamatergic neurons, which are important for its functions in modulating metabolism and anxiety, we hypothesized that maternal obesity may alter the number of glutamatergic neurons in the offspring VMN. We used a mouse model of a maternal high-fat diet (mHFD), to examine mRNA expression of the glutamatergic neuronal marker Satb2 in the mediobasal hypothalamus of control and mHFD offspring at GD17.5. We found sex differences in Satb2 expression, with mHFD-induced upregulation of Satb2 mRNA in the mediobasal hypothalamus of female offspring, compared to controls, but not males. Using immunohistochemistry, we found an increase in the number of SATB2-positive cells in female mHFD offspring VMN, compared to controls, which was localized to the rostral region of the nucleus. These data provide evidence that maternal nutrition during gestation alters the developing VMN, possibly increasing its glutamatergic drive of offspring in a sex-specific manner, which may contribute to sexual dimorphism in offspring health outcomes later in life. View Full-Text
Keywords: maternal nutrition; neurodevelopment; developmental programming; ventromedial nucleus of the hypothalamus; glutamatergic maternal nutrition; neurodevelopment; developmental programming; ventromedial nucleus of the hypothalamus; glutamatergic
►▼ Show Figures 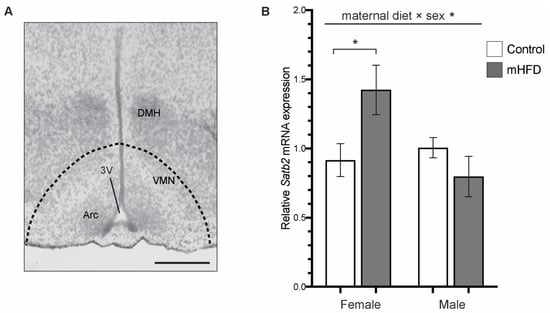