Synthetic Biology for Terraformation Lessons from Mars, Earth, and the Microbiome

What is the potential for synthetic biology as a way of engineering, on a large scale, complex ecosystems? Can it be used to change endangered ecological communities and rescue them to prevent their collapse? What are the best strategies for such ecological engineering paths to succeed? Is it possible to create stable, diverse synthetic ecosystems capable of persisting in closed environments? Can synthetic communities be created to thrive on planets different from ours? These and other questions pervade major future developments within synthetic biology. The goal of engineering ecosystems is plagued with all kinds of technological, scientific and ethic problems. In this paper, we consider the requirements for terraformation, i.e., for changing a given environment to make it hospitable to some given class of life forms. Although the standard use of this term involved strategies for planetary terraformation, it has been recently suggested that this approach could be applied to a very different context: ecological communities within our own planet. As discussed here, this includes multiple scales, from the gut microbiome to the entire biosphere.
Keywords: terraformation; Mars; evolution; microbiome; synthetic biology; drylands; hypercycles; restoration ecology terraformation; Mars; evolution; microbiome; synthetic biology; drylands; hypercycles; restoration ecology

One of the original proposals concerning Mars terraformation was suggested by James Lovelock [84]. A once watery and temperate planet that is presently bitterly cold and dry, but that could be changed, using Greenhouse gases, such as perfluorocarbons, which are capable—in principle—of warming Mars and increasing the density of its atmosphere which would in turn made liquid water stable. Several major issues emerge when evaluating the potential success of this strategy. Once this warming has taken place, changes would mainly take place through a long-term transformation triggered by a biotic community able to amplify the initial deviation from the current equilibrium state. How can we explore these issues?
In an idealized setting, a terraformed Mars would experience a set of transitions from a dry, polar desert to a planet displaying green landscapes and even perhaps grasslands. Such a linear succession sequence has more to do with a crude extrapolation from Earth’s communities than a truly scientific approach to what is actually possible. It is too often ignored that the there was a terraformation event (among others) that made possible the invasion of land and that is the evolution of soils linked to a complex mixture of plants and microbes [85,86]. Plants in particular became ecosystem engineers [87,88,89], i.e., crucial elements to control energy and matter flows in expanding habitats. Soils became the fabric of biocomplexity, plants started to develop a whole set of novel structures (the root systems) in the dark side while microorganisms coevolved with them [90]. As it occurs with other traits of our biosphere, the coevolution between biological and environmental properties pervades the creation of habitats suitable for the maintenance of complex and diverse life forms.
Mars terraformation (Sagan 1973, article “Planetary engineering on Mars” [91]) would likely require the combination of both strategies. In 1973, Carl Sagan [91] suggested that a sustained transport of – metric tons of some low-albedo material to the ice cap regions of Mars could efficiently change Mars climate (over the course of a century). He also suggested to use a “dark plant” capable of having the same impact: growing on the polar snows, it would accomplish the same objective. Sagan already indicated that none of the two scenarios was likely to happen in the “near future”. Almost fifty years later, both scenarios remain far from realistic as originally formulated. However, an enormous knowledge leap in planetary science, and particularly in our understanding of Mars, has taken place. Water presence in the underground and multiple sources of geological evidence reveal a planet that used to be wet and a global picture of the planetary limits and potentials is emerging. Similarly, recent decades have witnessed the development of synthetic biology as an engineering avenue for modifying cells to perform novel functionalities [92]. This area promises the modification of living systems in ways that could overcome the design limitations resulting from evolutionary trade-offs [93,94]. Could engineered microorganisms be the key for planetary terraforming?
To approach the previous questions, it is helpful to consider the idea of biosphere terraformation outlined above. The suggestion of using synthetic biology to engineer Earth’s habitats [18] implies a starting point that is rather different from the Mars engineering. In a nutshell, terraforming Mars is largely a bottom-up design. It will require locating the environment under a favourable set of conditions that will define the boundary conditions for potential life forms. These living systems, likely to be limited to microorganisms, will be introduced with the aim of taking advantage of the geoengineering process and push it forward in ways similar to those that changed our primitive planet. Once in place, microorganisms should not only thrive in the Red Planet (while dealing with all kinds of radiation or water shortage issues) but also change its climate.
Using Lovelock’s toy model Daisyworld [95,96,97,98], engineering at both the climate and microorganisms levels should provide an initial state from which the Martian ecology would start evolving, but starting from a near-equilibrium state. Instead, the proposed biosphere terraformation scheme would be a top-down one. Our biosphere is already made of networks of interacting species under a range of favourable conditions. Modifications of habitats or communities necessarily start from an organized structure that is far from equilibrium. Interventions based on synthetic biology trigger changes in well-established biological communities, exploiting the presence of multiple equilibrium states [18,20,30,66,75]. The potential avenues opened by this idea are wide, but given the context analysed here, we will consider an especially relevant case study, namely the potential for terraformation of arid and semiarid ecosystems.

N.C.-P., B.V., R.S., and V.L. have been funded by PR01018-EC-H2020-FET-Open MADONNA project. Moreover, N.C.-P., B.V. and R.S. were partialy funded by European Research Council Advanced Grant (SYNCOM), and the Botin Foundation (Banco Santander through its Santander Universities Global Division). R.S. also counted with the support of the FIS2015-67616-P grant, the Santa Fe Institute, and the support of Secretaria d’Universitats i Recerca del Departament d’Economia i Coneixement de la Generalitat de Catalunya. J.S. has been funded by a “Ramón y Cajal” contract RYC-2017-22243, and by the MINECO grant MTM2015-71509-C2-1-R and the Spain’s “Agencia Estatal de Investigación” grant RTI2018-098322-B-I00, as well as by the CERCA Programme of the Generalitat de Catalunya. F.T.M acknowledges the support by the European Research Council (ERC Grant Agreements 242658 [BIOCOM] and 647038 [BIODESERT], and also acknowledges support from Generalitat Valenciana (CIDEGENT/2018/041). M.D.B. acknowledges support from the Marie Sklodowska-Curie Actions of the Horizon 2020 Framework Program H2020-MSCA-IF-2016 under REA grant agreement 702057 and acknowledges support from a Juan de la Cierva Formación grant from Spanish Ministry of Science (FJCI-2018-036520-I).

The authors thanks all their collaborators for useful, out-of-the-box discussions concerning synthetic biology, drylands, terraformation, climate change and biomathematics. 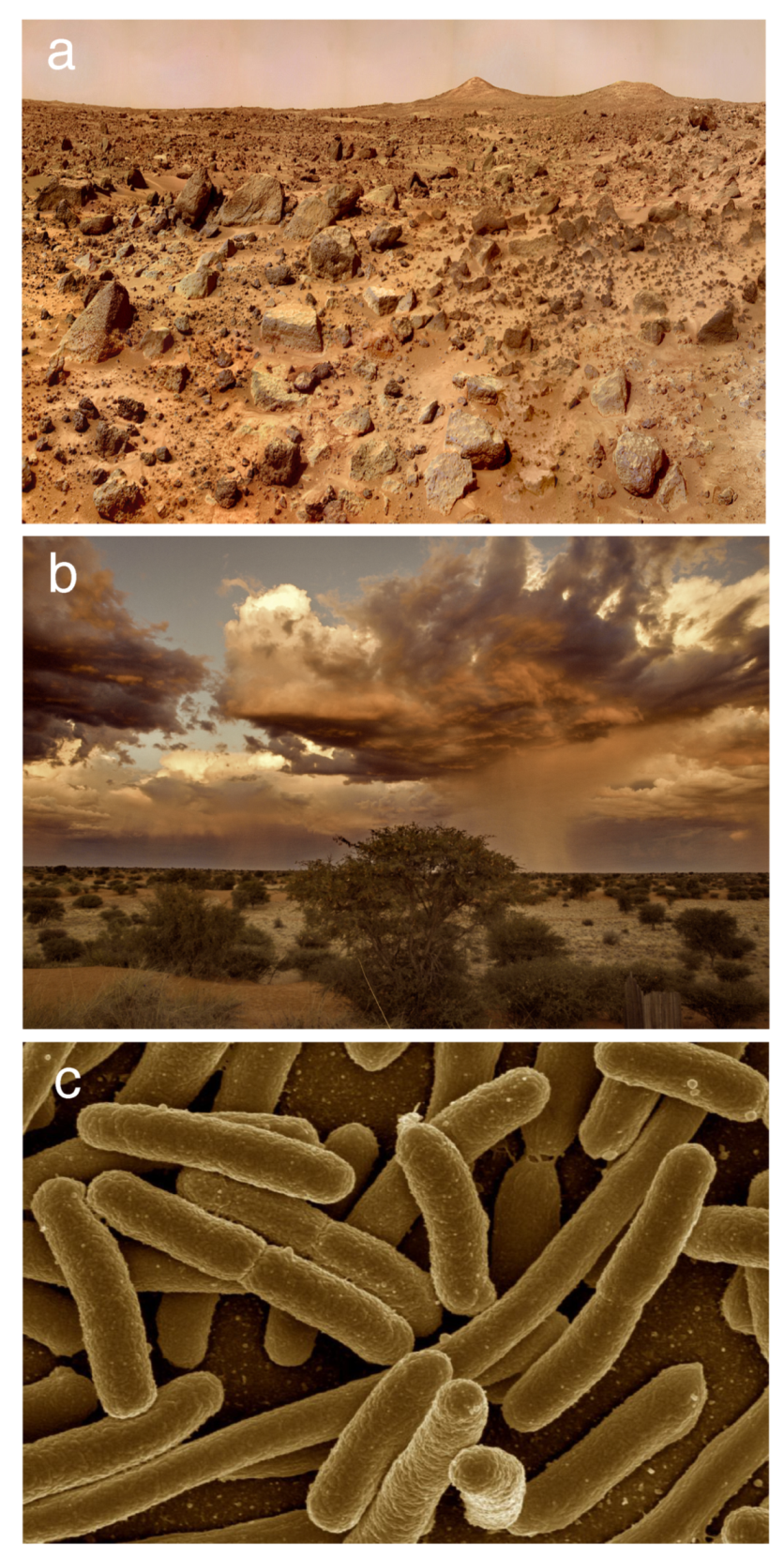 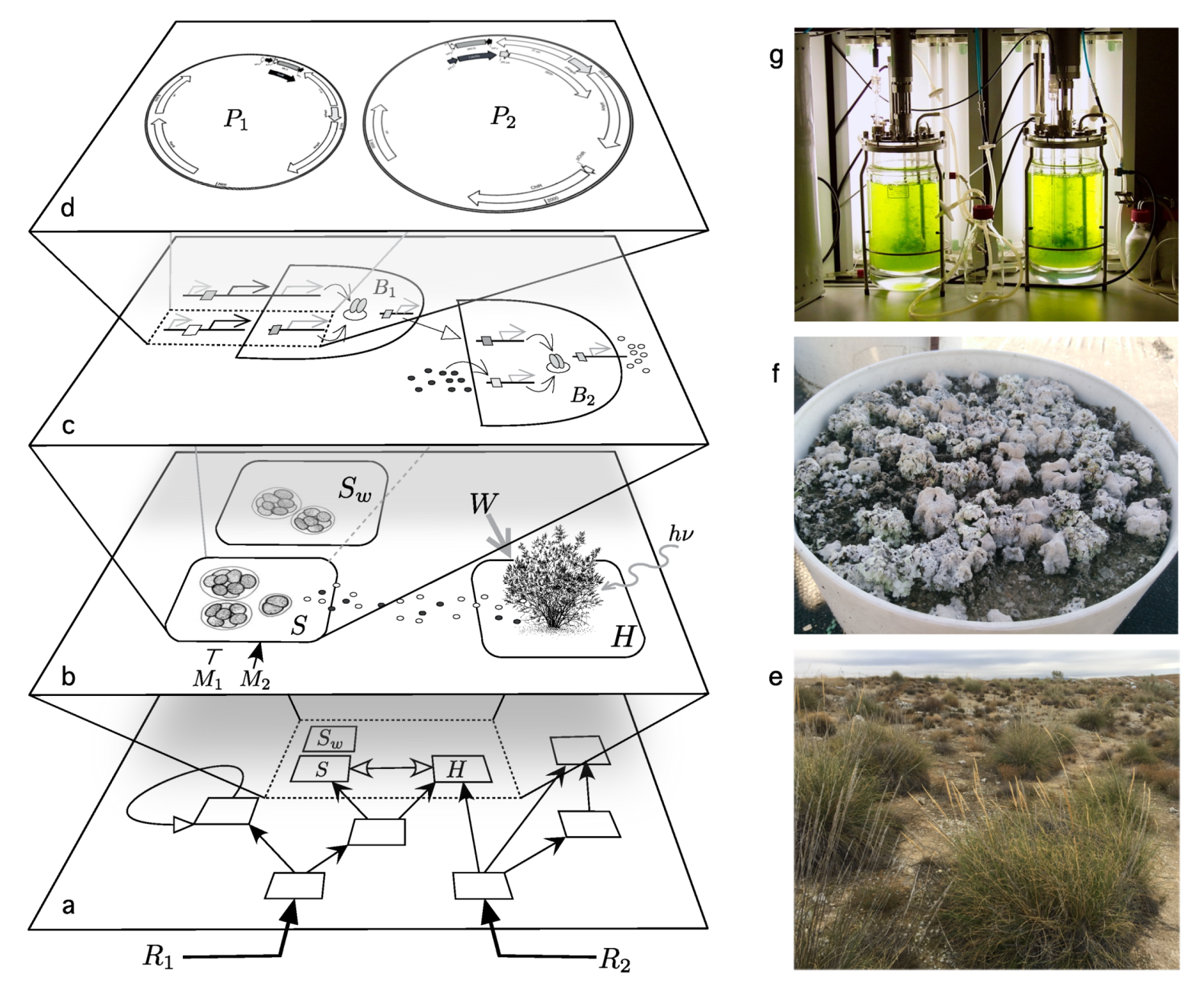 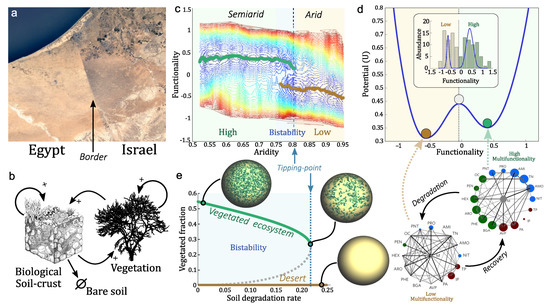 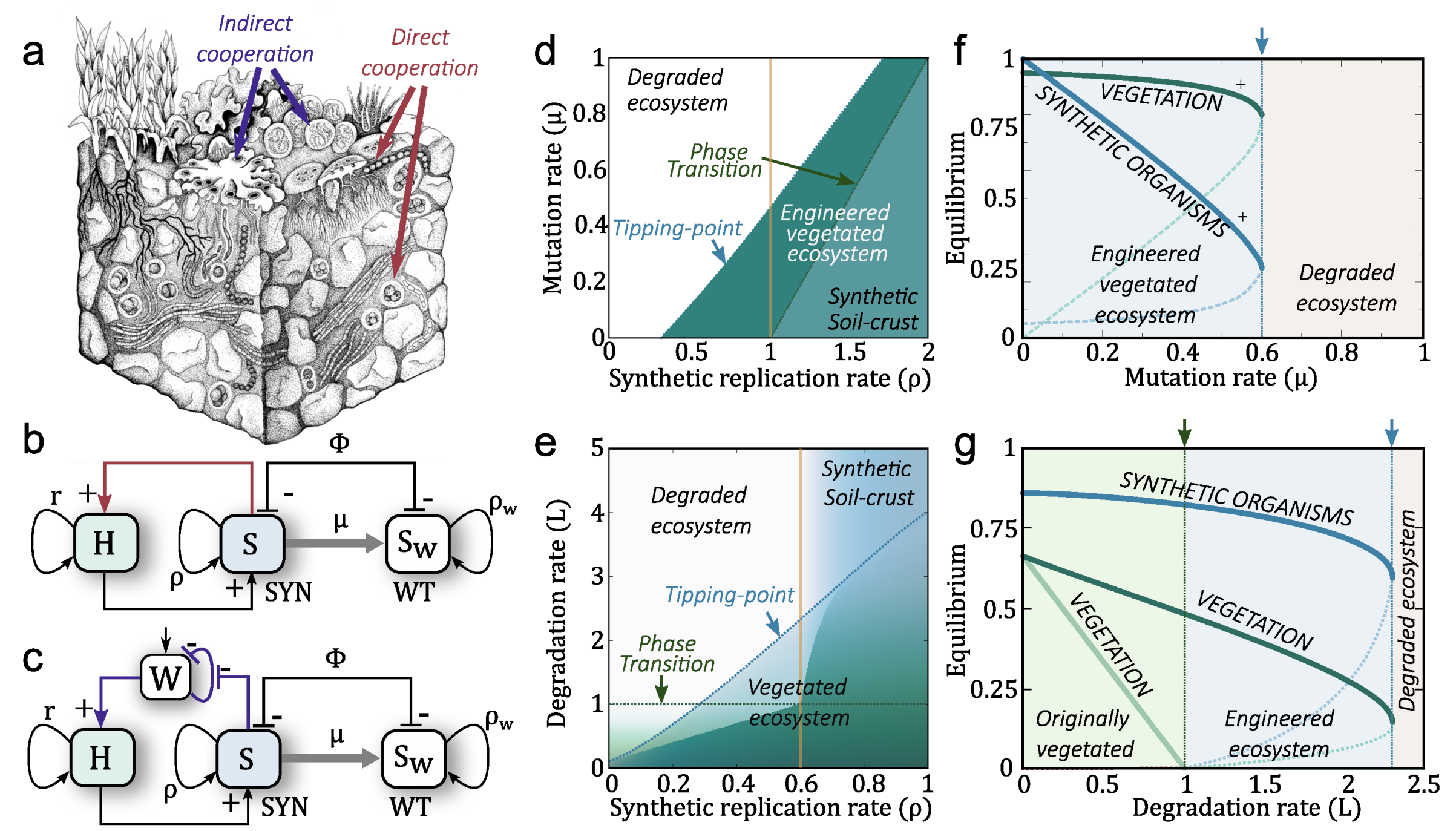 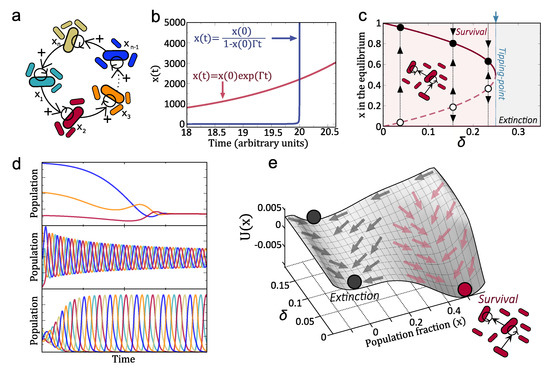 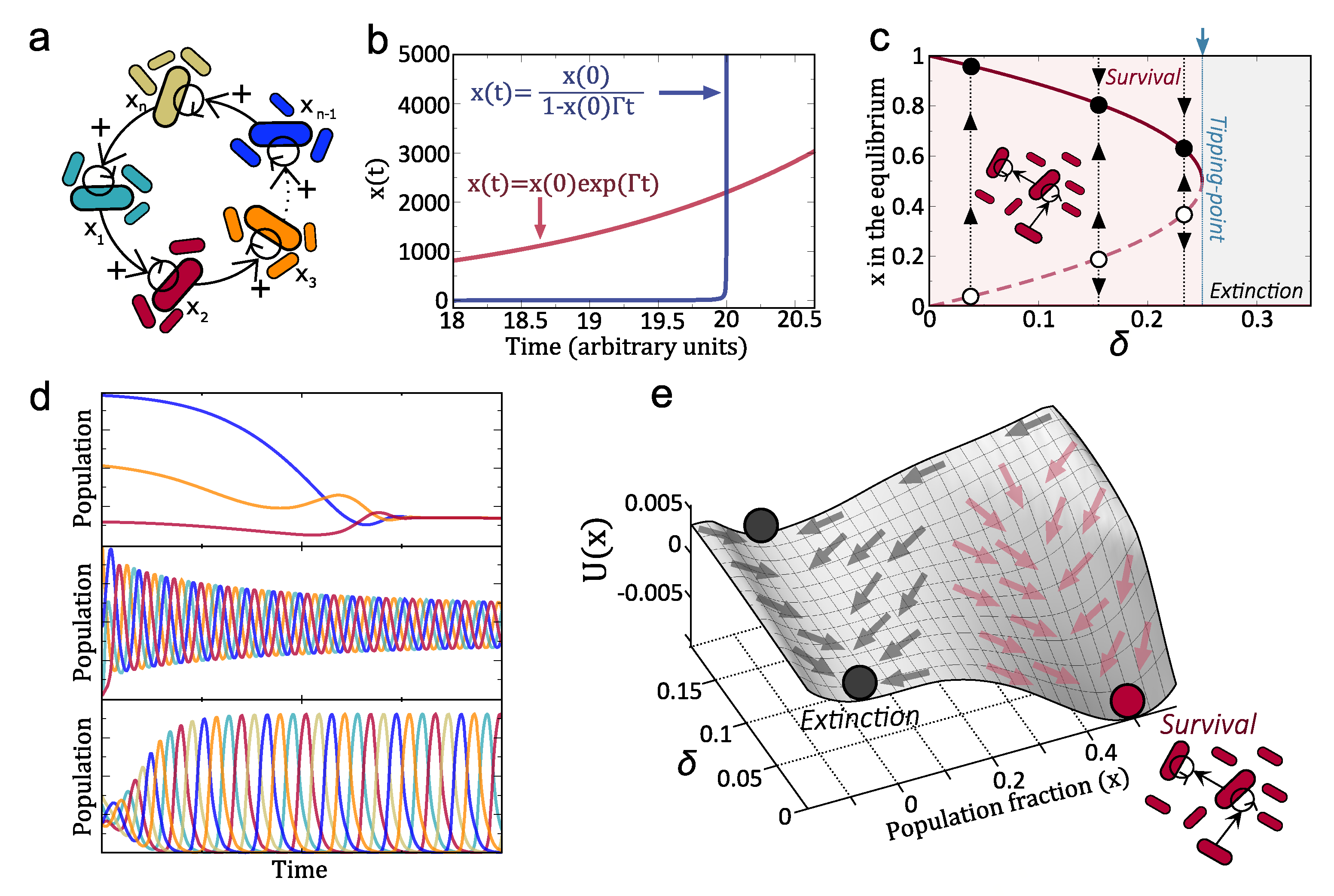 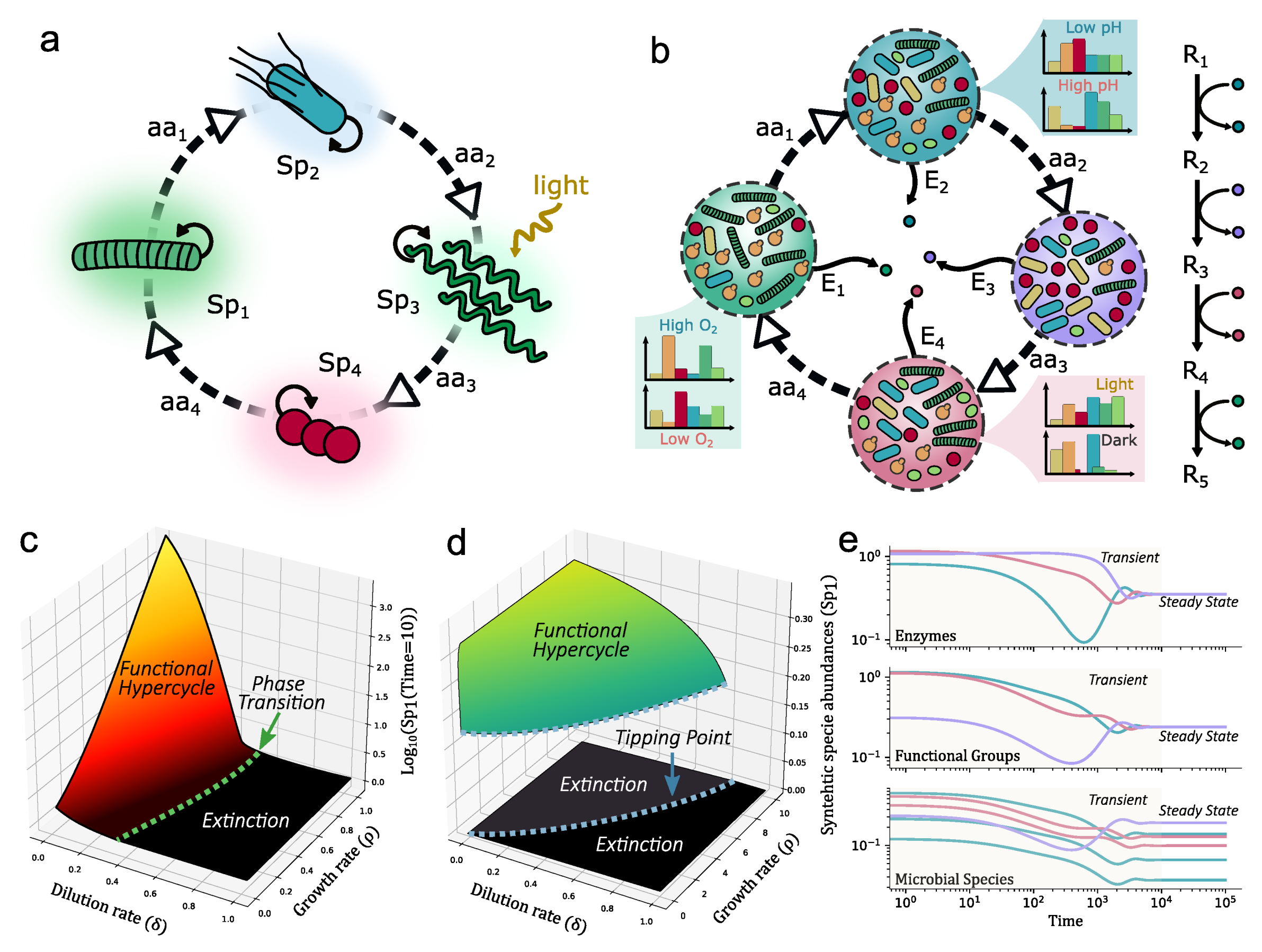 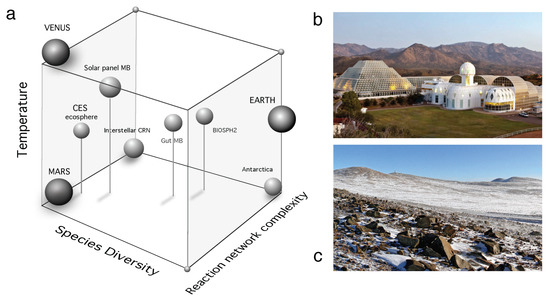