:
In this study, we tried to combine maximum power point trackers (MPPT) and «Extremum Seeking» in a single multi-parameter extremum seekeng system for orienting solar panels and draw attention to the problem of a deeper study of nonlinear adaptive control using appropriate methods for their analysis. MPPT controller becomes one of the extremum seeking loops, and as a result, the maximum power is achieved not only by searching for the optimal voltage value, but also due to the optimal angular position of the solar panel in Euclidean space, because the photocurrent depends on the angle of inclination of the Sun’s rays to the surface. The task of tuning extremum seeking loops becomes more analytically difficult, which is associated with nonlinear and multiply connected properties. This requires starting the solution from a simpler “linear” level. We applied the approach associated with the passage of modulating oscillations with a given frequency and amplitude through an open-loop system. This approach, which is generalized in this work at least for extremum seeking of the solar panels power, should be used for approximate calculations if there are no strict requirements for convergence and energy loss for the search. Research design is as follows: parametric identification of the current-voltage and volt-watt curves; obtaining the transfer function by the semi-automated sparse matrix method; reducing the order of the transfer function of coordinate electric drives by introducing a scaling factor. To the most important theoretical result, we attribute the property of the generalized amplitude of the solar panel power oscillations with multi-parameter control to be a combination of input modulating oscillations superimposed on the signals of the control integrators. Having revealed the relationship of their properties, it becomes possible to eliminate non-linearity from the system and operate only with the analytical relationship of the input modulating oscillations and the generalized oscillation of the controlled parameter. We attribute the prediction of the effect to one of the most interesting physical results, in which, for the same amplitude of modulating oscillations, the amplitudes of the photocurrent oscillations and the power of the solar panel at different angular positions will be generally different.
Keywords:
solar panel; perturbation-based extremum seeking; open-loop system; volt-current curve; volt-watt curve; transfer function; state-space; amplitude and frequency of the modulating signal; minimizing the effect of the variable component

1. Some of the Most Important Aspects of the Problem

2. Solar Battery—Multiparameter Object of Extremum Seeking Control. Parametric Identification of the Voltage-Current and Volt-Watt Characteristics of the Solar Panel in an Analytical Way

4. Discussion. Interpretation of the Results. Limitations of the Study in Question

The results obtained in the study made it possible to preliminarily study a multi-parameter system for searching for maximum power by means of the optimal orientation of a series of solar panels:

In this study, an attempt was made to combine the “MPPT” and the classic “Extremum seeking” into a single principle of multi-parameter extremum seeking control of solar panels, as well as an approach to the linear analysis of such systems. Summing up most significant aspects of the study and the results, we came to the conclusion that the results of the parametric identification of the solar panel in an analytical way differ very little from the data of the solar panels taken from [41], although this required the removal of the “weakly perturbed” component from the system of Equation (3) to make it solvable. We obtained the equivalent transfer function of the solar panel, and its analysis showed that the solar panel can be considered as a proportional link. This helped us in the next stage, where we presented the system in an open-loop form (see Figure 4) and derived the generalized fluctuation in the solar panel power. This generalized amplitude of power oscillations of a solar panel with multi-parameter control is a combination of modulating input oscillations superimposed on the signals of control integrators. This means that by revealing the relationship between the properties of the generalized oscillations of the controlled parameter and the parameters of the input oscillations, it becomes possible to eliminate non-linearity from the system and use simpler analytical relationships between them. The results presented on this subject can thus be extended to other types of solar panels. In addition, the effect associated with a change in the angular position, in which for the same amplitude of modulating oscillations the amplitudes of the photocurrent oscillations and the solar panel power at different angular positions will generally differ, makes us turn to adaptive control algorithms and methods of their analysis as the most natural for this class of systems.
Although computational experiments have shown that there are no divergent results, not all of them can be called successful. So, the system in experiments No.2 and No.3 is generally in stagnation. We associate this with incorrectly selected parameters of high-pass filters and control integrators. We have reflected this debatable issue in the Discussions.
We conducted six experiments with different types of solar panels. This database has a small size and needs to be replenished using elements of the “Big Data” concept. This will clarify the ranges of parameters for various types of solar panels, refine the theoretical model and improve the quality of convergence.
When discussing the results in the broadest context, they, of course, cannot be called completely comprehensive. First of all, they open an important problem related to the development of new control systems for tracking systems for the Sun, namely, the creation and accurate analytical study of adaptive control systems. Our future work will be carried out in this direction.

All the work presented in this paper was carried out by S.A.Y. under the supervision of K.I.M. 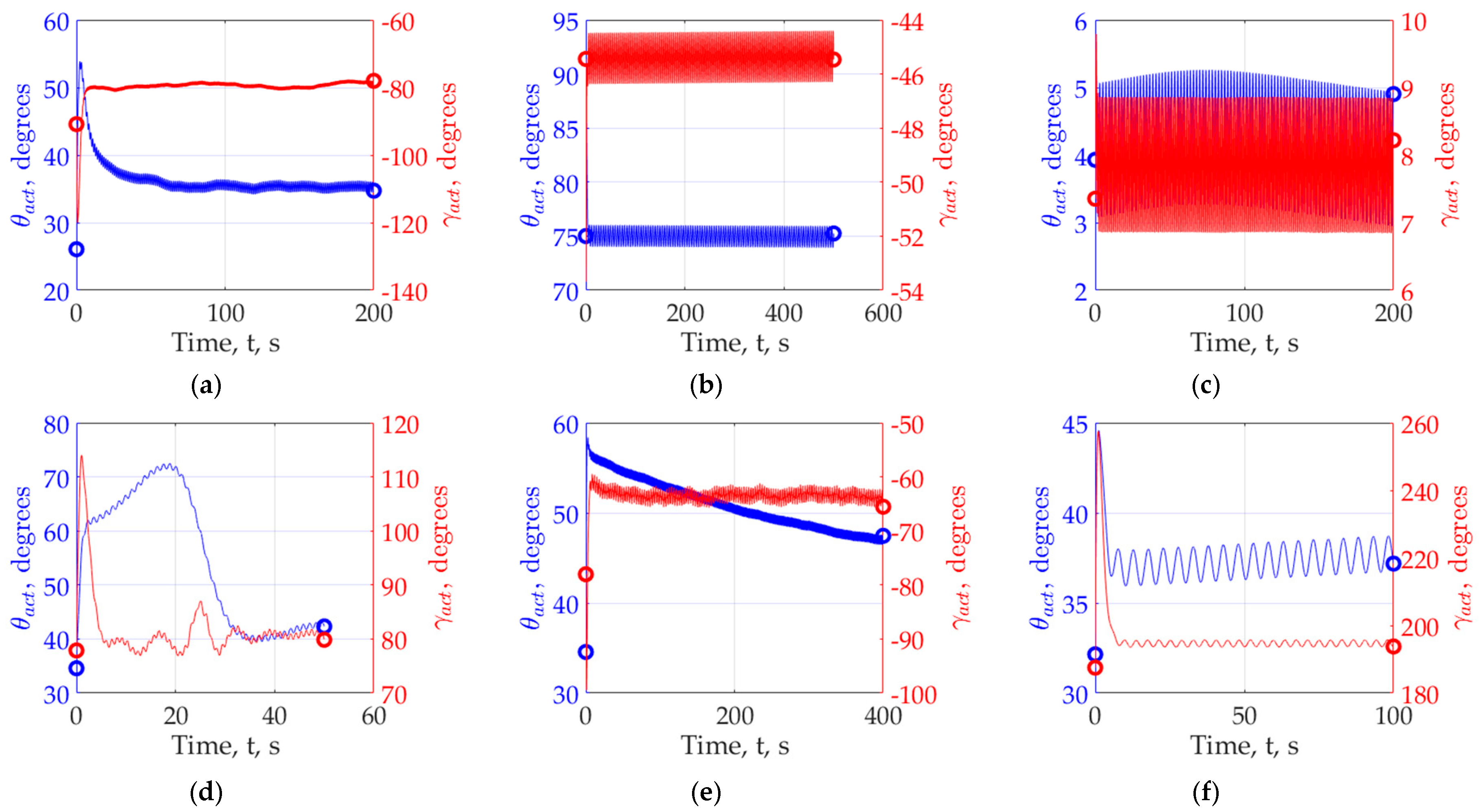