Lots of studies on gold precipitation mechanisms have focused on fluid inclusions within quartz. However, the trace elements in quartz reflect the properties of the ore fluid, and a comparison of the trace element content in different types of quartz can reveal the precipitation mechanism. The Jinqingding gold deposit is the largest gold deposit in the Muping–Rushan gold belt and contains the largest single sulfide–quartz vein type orebody in the gold belt. This study distinguished four types of quartz in this orebody through field work and investigations of the mineralogy and cathodoluminescence (CL) of the quartz and crosscutting relationships as seen under a microscope. In situ studies via electron probe micro-analyzer (EPMA) and laser ablation-inductively coupled plasma-mass spectrometry (LA-ICP-MS) were used to determine the trace element content of the different quartz types. Type Qa displayed a comb structure in the field and zoning under the microscope and in CL. Milky white and smoke grey Qb was the most common quartz type and hosted the most sulfide and gold. Qc was Qa and Qb quartz that recrystallized around pyrite or overgrew and appeared different from Qa and Qb in CL images. Qd occurred within fractures in pyrite. Qa formed prior to the mineralization of gold, and Qd formed post-mineralization. Qb and Qc provided information regarding the ore fluid during mineralization. Sericites occurred with pyrite in fractures in the quartz, and some, along with free gold, filled in fractures in pyrite. Free gold occurred within Qa, Qb, Qc, and in brittle fractures in pyrite. Qc had the lowest Al content of all of the quartz types. As Al content is related to the acidity of the ore fluid in previous study, this indicated an acidity decrease during mineralization, which could be attributed to the sericitization. Sericitization could indicate a potential gold occurrence. The Ti content decreased from Qb to Qc, indicating a decrease in temperature during quartz overgrowth formation. Change in acidity and cooling can therefore be identified as possible causes of gold precipitation in the sulfide–quartz vein type in the Jinqingding gold deposit. View Full-Text
Keywords: quartz; trace element; precipitation mechanism; in situ study; sericite; acidity; formation temperature quartz; trace element; precipitation mechanism; in situ study; sericite; acidity; formation temperature
►▼ Show Figures 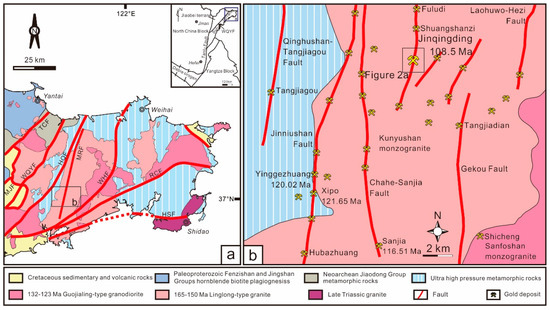