A hydrochloric acid hydrometallurgical process was evaluated for Ni and Co extraction from a low-grade saprolitic laterite. The main characteristics of the process were (i) the application of a counter-current mode of operation as the main leaching step (CCL), and (ii) the treatment of pregnant leach solution (PLS) with a series of simple precipitation steps. It was found that, during CCL, co-dissolution of Fe was maintained at very low levels, i.e., about 0.6%, which improved the effectiveness of the subsequent PLS purification step. The treatment of PLS involved an initial precipitation step for the removal of trivalent metals, Fe, Al, and Cr, using Mg(OH)2. The process steps that followed aimed at separating Ni and Co from Mn and the alkaline earths Mg and Ca, by a combination of repetitive oxidative precipitation and dissolution steps. Magnesium and calcium remained in the aqueous phase, Mn was removed as a solid residue of Mn(III)–Mn(IV) oxides, while Ni and Co were recovered as a separate aqueous stream. It was found that the overall Ni and Co recoveries were 40% and 38%, respectively. About 45% of Ni and 37% of Co remained in the leach residue, while 15% Ni and 20% Co were lost in the Mn oxides. View Full-Text
Keywords: low-grade saprolitic laterite; counter-current leaching; pregnant leach solution; purification low-grade saprolitic laterite; counter-current leaching; pregnant leach solution; purification
►▼ Show Figures 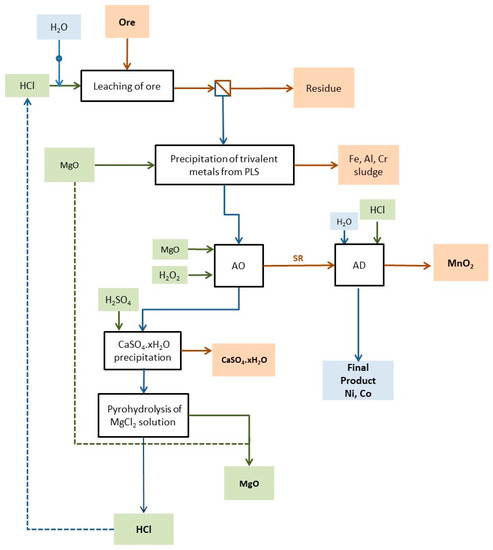