Modes of Occurrence and Abundance of Trace Elements in Pennsylvanian Coals from the Pingshuo Mine, Ningwu Coalfield, Shanxi Province, China
Previous Article in Journal

Morphology and Composition of Microspheres in Fly Ash from the Luohuang Power Plant, Chongqing, Southwestern China

The Fate of Trace Elements in Yanshan Coal during Fast Pyrolysis

In this study, a high-sulfur and high-ash yield coal sample obtained from the Yanshan coalfield in Yunnan, China was analyzed. A series of char samples was obtained by pyrolysis at various temperatures (300, 400, 500, 600, 700, 800, and 900 °C) and at a fast heating rate (1000 °C/min). A comprehensive investigation using inductively coupled plasma mass spectrometry (ICP-MS), a mercury analyzer, ion-selective electrode (ISE) measurements, X-ray diffraction (XRD) analysis, and Fourier transform infrared (FTIR) spectroscopy was performed to reveal the effects of the pyrolysis temperature on the transformation behavior of trace elements (TEs) and the change in the mineralogical characteristics and functional groups in the samples. The results show that the TE concentrations in the raw coal are higher than the average contents of Chinese coal. The concentrations of Be, Li, and U in the char samples are higher than those in raw coal, while the opposite was observed for As, Ga, Hg, and Rb. The F and Se concentrations are initially higher but decrease with pyrolysis temperature, which is likely caused by associated fracturing with fluoride and selenide minerals. Uranium shows the highest enrichment degree, and Hg shows the highest volatilization degree compared to the other studied TEs. As the temperature increases, the number of OH groups decreases, and the mineral composition changes; for example, pyrite decomposes, while oldhamite and hematite occur in the chars. It is suggested that the behavior and fate of TEs in coal during fast pyrolysis are synergistically influenced by self-characteristic modes of occurrence and mineralogical characteristics. View Full-Text
Keywords: trace elements; minerals in coal; transformation behavior; coal fast pyrolysis trace elements; minerals in coal; transformation behavior; coal fast pyrolysis
►▼ Show Figures 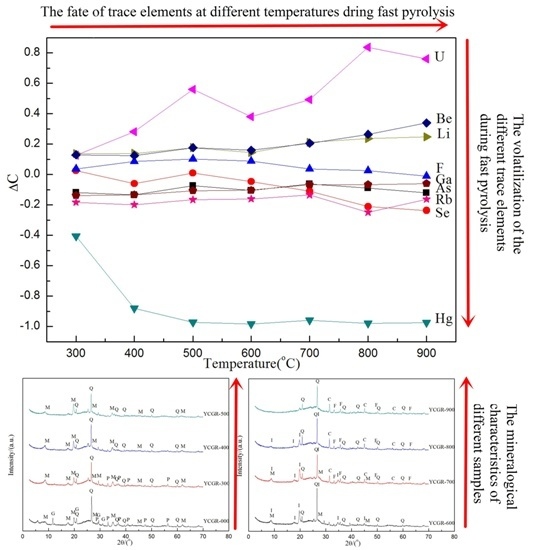