The Response of the Soil Microbiome to Contamination with Cadmium, Cobalt and Nickel in Soil Sown with Brassica napus
Next Article in Special Issue

The depletion of ore deposits, the increasing demand for raw materials, the need to process low-grade, complex and finely disseminated ores, and the reprocessing of tailings are challenges especially for froth flotation separation technologies. Even though they are capable of handling relatively fine grain sizes, the flotation separation of very fine and ultrafine particles faces many problems still. Further, the flotation of low-contrast semi-soluble salt-type minerals with very similar surface properties, many complex interactions between minerals, reagents and dissolved species often result in poor selectivity. This study investigates the flotation beneficiation of ultrafine magnesite rich in dolomite from desliming, currently reported to the tailings. The paper especially focuses on the impact of the depressant sodium hexametaphosphate (SHMP) on the following: (i) the froth properties using dynamic froth analysis (DFA), (ii) the separation between magnesite and dolomite/calcite, and (iii) its effect on the entrainment. As a depressant/dispersant, SHMP has a beneficial impact on the flotation separation between magnesite and dolomite. However, there is a trade-off between grade and recovery, and as well as the dewatering process which needs to be considered. When the SHMP increases from 200 g/t to 700 g/t, the magnesite grade increases from 67% to 77%, while recovery decreases massively, from 80% to 40%. The open circuit with four cleaning stages obtained a concentrate assaying 77.5% magnesite at a recovery of 45.5%. The dolomite content in the concentrate is about 20%, where 80% of dolomite was removed and importantly 98% of the quartz was removed, with only 0.3% of the quartz in the final concentrate. Furthermore, the application of 1-hydroxyethylene-1,1-diphosphonic acid (HEDP) as a more environmentally friendly and low-cost alternative to SHMP is presented and discussed. Using only 350 g/t of HEDP can achieve a similar grade (76.3%), like 700 g/t of SHMP (76.9%), while obtaining a 17% higher magnesite recovery as compared to 700 g/t of SHMP. Interestingly, the proportion of hydrophilic quartz minerals ending up in the concentrate is lower for HEDP, with only 1.9% quartz at a recovery of 21.5% compared to the 2.7% of quartz at a recovery of 24.9% when using SHMP. The paper contributes in general to understanding the complexity of the depressant responses in froth flotation. View Full-Text
Keywords: magnesite; dolomite; tailings; sodium hexametaphosphate SHMP; 1-hydroxyethylene-1,1-diphosphonic acid HEDP; dynamic froth analyzer; froth properties; remining; pneumatic Imhoflot; reactor–separator magnesite; dolomite; tailings; sodium hexametaphosphate SHMP; 1-hydroxyethylene-1,1-diphosphonic acid HEDP; dynamic froth analyzer; froth properties; remining; pneumatic Imhoflot; reactor–separator
►▼ Show Figures 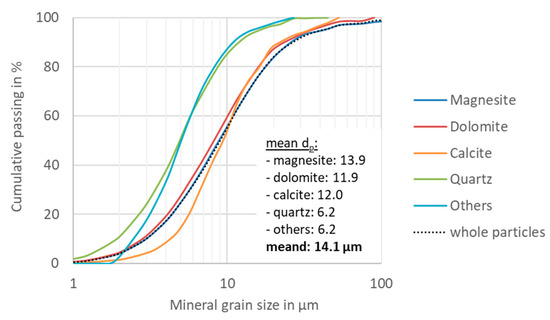