Heterogeneous Nucleation and Growth of CaCO3 on Calcite (104) and Aragonite (110) Surfaces: Implications for the Formation of Abiogenic Carbonate Cements in the Ocean
Previous Article in Special Issue

The Seve Nappe Complex exposed in the Kittelfjäll area of the northern Scandinavian Caledonides comprises a volcano-sedimentary succession representing the Baltica passive margin, which was metamorphosed during the Iapetus Ocean closure. Garnet amphibolites, together with their host migmatitic paragneisses, record a potential (U)HP event followed by decompression-driven migmatization. The garnet amphibolites were originally thought to represent retrogressively altered granulites. The petrological and geochemical features of a studied garnet amphibolite allow for speculation about a peridotitic origin. Zirconium (Zr) content in rutile inclusions hosted in garnet in paragneisses points to near-peak temperatures between 738 °C and 780 °C, which is in agreement with the c. 774 °C obtained from the matrix rutile in the garnet amphibolite. The matrix rutile in multiple paragneiss samples records temperatures below 655 °C and 726 °C. Whereas the LA-ICP-MS U-Pb dating of zircon cores revealed the age spectrum from Paleoproterozoic to early Paleozoic, suggesting a detrital origin of zircon cores in paragneisses, the metamorphic zircon rims show an Early Ordovician cluster c. 475–469 Ma. Additionally, zircon cores and rims from the garnet amphibolite yielded an age of c. 473 Ma. The REE patterns of the Caledonian zircon rims from the paragneisses show overall low LREE concentrations, different from declining to rising trends in HREE (LuN/GdN = 0.49–38.76). Despite the textural differences, the cores and rims in zircon from the garnet amphibolite show similar REE patterns of low LREE and flat to rising HREE (LuN/GdN = 3.96–65.13). All zircon rims in both lithologies display a negative Eu anomaly. Hence, we interpret the reported ages as the growth of metamorphic zircon during migmatization, under granulite facies conditions related to exhumation from (U)HP conditions. View Full-Text
Keywords: geochronology; subduction; metamorphism; migmatite; decompression geochronology; subduction; metamorphism; migmatite; decompression
►▼ Show Figures 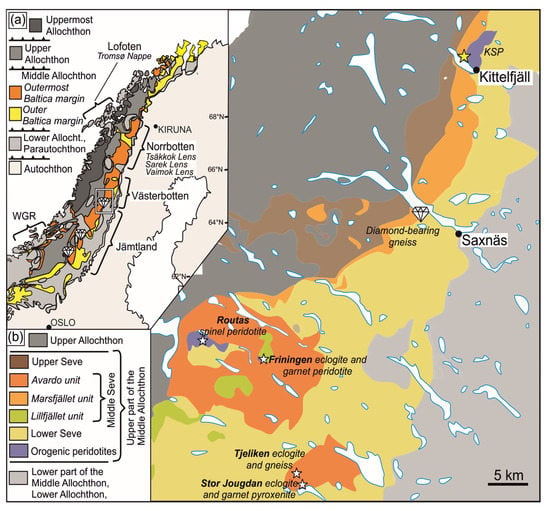