Agates from Western Atlas (Morocco)—Constraints from Mineralogical and Microtextural Characteristics

Agate samples collected from the vicinity of Asni and Agouim (Western Atlas, Morocco) were investigated using microscopic observations supported by Raman micro-spectroscopy. The agates are marked by the presence of various microtextures typical of epithermal vein deposits, including jigsaw-puzzle, feathery, and lattice-bladed. The first two indicate that the formation of agates was likely marked by recrystallization of metastable silica phases (i.e., opaline silica or massive chalcedony). The presence of lattice-bladed (after barite and calcite) quartz may be, in turn, ascribed to the boiling-related conditions that could have triggered the formation of abundant copper and iron sulfides found within silica matrix. Additionally, the local occurrence of growth lines (so-called Bambauer quartz) and intergrowth of length-slow and length-fast chalcedony are linked to the variations of physico-chemical conditions during rock formation (alkaline-acidic). According to Raman spectroscopy, silica matrix of the agates is made of α-quartz with a local admixture of moganite (from 0.0 up to 78 wt.%), but also contains numerous solid inclusions of hematite, celadonite, as well as poorly-organized carbonaceous material and rutile. These phases were likely emplaced during low-temperature hydrothermal activity of SiO2-bearing fluids that originated from post-magmatic hydrothermal activity developed within host rocks and/or meteoric waters. View Full-Text
Keywords: Moroccan agates; ore minerals; microtexture; moganite; Raman spectra Moroccan agates; ore minerals; microtexture; moganite; Raman spectra
►▼ Show Figures 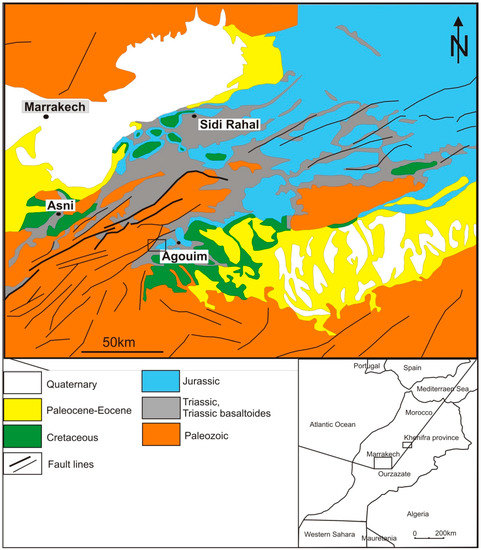