The Genetics of Asymmetry: Whole Exome Sequencing in a Consanguineous Turkish Family with an Overrepresentation of Left-Handedness
Previous Article in Special Issue

:
Symmetry detection has long been a major focus of perception research. However, although symmetry is often cited as a “grouping principle”, the effect of symmetry on grouping, an important form of perceptual organization, has been little measured. In past research, we found little spatio-temporal grouping for oblique lines symmetric around a horizontal axis during ambiguous rotary motion in depth. Grouping was measured by the degree to which the ambiguous motion direction was resolved for two elements in common (rotational linkage). We hypothesized that symmetry-based grouping would be stronger if symmetry was redundant i.e., carried by elements of greater complexity. Using the rotational linkage measure, we compared grouping for horizontally symmetric simple oblique lines and for lines composed of multiple conjoined orientations and found greater grouping for the more complex symmetric lines. A control experiment ruled out possible confounding factors and also showed a grouping effect of vertically aligned endpoints. We attribute the stronger grouping effect of redundant symmetry to the fact that it has a lower probability than does simple symmetry of arising from an accidental environmental arrangement.
Keywords:
symmetry; grouping; redundancy; complexity; rotary motion in depth

The three figures used are shown drawn to scale at a quarter actual size in Figure 2. The axis of rotation is indicated by a dotted line. Observers sat at a distance of 140 cm from the screen with their eyes at the level of the midpoint of the object on the screen. The separation of the lines of Figure 2A along the axis of rotation was 2.5 cm (one degree). The average line orientation (15 degrees from the horizontal) and average separation were the same in all three figures. To achieve smooth motion, figures were presented on a computer-controlled Hewlett-Packard oscilloscope with a fast phosphor. A red filter placed over the screen eliminated faint ghosts caused by persistence. Each figure was presented for 10 rotations at a speed of 12 s per rotation. This slow smooth rotation has been found in the past to elicit ample opportunities for apparent change from fragmentation (opposite rotation) to rotational linkage. Although strict fixation was not required, a dot to guide location of looking was placed midway between the upper and lower sets of lines on the axis of rotation (which was not shown).

Participants in both experiments were volunteers from the State University of New York, State College of Optometry. For experiment 1, twelve students, ignorant of the rationale of the experiment, were used. Each observer was shown Figure 2A (known to readily fragment) and asked what he/she saw. As in all our grouping experiments, only those observers who spontaneously reported seeing fragmentation for Figure 2A in a pretest were used in the main Experiment. This ensured that they were clear about what they were supposed to respond to. Two of the twelve observers only reported fragmentation after it was suggested to them and were not used in the main experiment. The figures were presented for each observer in a different random order.

The mean fragmentation time is shown next to each figure in Figure 2. An analysis of variance (ANOVA) showed a significant effect of figure (F = 7.29, df 2, 18 p < 0.005). Post-hoc Newman-Keuls tests showed that the mean for Figure 2A was significantly higher than the means for Figure 2B,C, (5.3 p < 0.01; 3.7 p < 0.05 respectively). Although Figure 2C had a lower mean fragmentation time (more grouping) than Figure 2B as predicted, these two means did not differ significantly from each other on a Newman-Keuls test.
The results support the hypothesis that symmetry carried by more complex elements (made up of multiple line orientations) results in greater grouping than symmetry carried by simple single line elements. It is possible that another difference between the simple and more complex stimuli is responsible rather than symmetry redundancy per se. It is unlikely however that the effect of complex symmetry arose from a fortuitous effect of the particular figures used, since Figure 2B,C differ considerably from each other. For example, Figure 2B is convex whereas Figure 2C is both convex and concave yet both enhanced grouping relative to Figure 2A. Experiment 2 explores these issues further.

In this experiment, we attempted to replicate the basic finding of Experiment 1 with respect to complexity and to compare the effects of concave and convex symmetry. We also compared fragmentation time for symmetric figures and for similarly complex elements (lines with a mid-line orientation change) but not arranged symmetrically. Finally, in Experiment 2, we investigated the effect on grouping of offsetting the upper element horizontally from the lower element. This destroyed any reflective symmetry present while maintaining the same upper and lower elements as in the symmetric figures. This manipulation also explored vertical alignment of contour end points as a grouping factor.

The figures used in Experiment 2 are shown drawn in Figure 3 at one-third actual size. There were four basic figures, each composed of an upper and lower element with endpoints vertically aligned and the same four figures with the upper and lower elements offset. The four basic figures were Figure 3A (Figure 2A from Experiment 1), Figure 3B (Figure 2B from Experiment 1, which was symmetric about a central horizontal axis and convex), Figure 3C (A concave figure symmetric about a central horizontal axis, which consisted of two lines per element that had the same average orientation and spacing as Figure 3A,B) and Figure 3D (A composite figure consisting of one line from Figure 3B and one from Figure 3C). Figure 3D provided a baseline non-symmetric figure against which to compare the symmetric Figure 3B,C from which its components were drawn. Finally, Figure 3E–H were the offset versions of the four basic Figure 3A–D respectively. These have the same components as the equivalent non-offset figures but lack symmetry.
The method and observation distance were the same as in Experiment 1. All eight figures were presented rotating around a central vertical axis in parallel projection. There were initially 18 observers from a similar population as those used in Experiment 1 and ignorant concerning the rationale of the experiment. Three observers were rejected because they did not spontaneously report fragmentation in the pretest with the basic two-line Figure 2A. Thus 15 observers completed the experiment.
Stimuli were presented in a different random order for each observer. All figures were also presented for a second time to each observer in a different random order. The mean of the two presentations for each condition for each observer was used in the analysis.

The means and standard errors of the fragmentation times for each condition are shown in Figure 4. Planned contrasts were carried out on the non-offset Figure 3A–D to test for an effect of complex symmetry. The mean fragmentation time for the more complex (redundant) symmetric Figure 3B,C were found to be significantly lower than for the simple symmetric Figure 3A and the asymmetric Figure 3D (F = 8.83, df 1, p < 0.005). A second planned contrast was carried out to examine the effect of offset. Offset was found to have a significant effect (F = 8.1, df 1, p < 0.005). The interaction between figure and offset was not significant.

The hypothesis was again supported that horizontal symmetry supports grouping more effectively as it becomes more redundant. We also found a very general breakdown of grouping with horizontal offset of the elements. It is an ecological fact that the prevalence of vertically aligned contour edges is ubiquitous in the carpentered world. Our data suggest that it is also a grouping principle.
The data support the view that redundant symmetry is stronger evidence for structure than non-redundant symmetry. The more complex the symmetry, the greater the coincidence it would be for the symmetric layout to arise from a chance arrangement than from intrinsic structure. The visual system could have such contingencies built in to its responses either by evolution or learning. This argument could be made more strongly if in Experiment 1, symmetric (reflected) lines composed of four orientations (Figure 2C) had produced significantly more grouping than those composed of two lines (Figure 2B). Although there was a difference, the fact that it was not significant suggests that the grouping process may have a low ceiling with respect to symmetry redundancy.
As mentioned in the introduction, the explanation we have proposed could also be couched in Bayesian terms.

Our past research showed that horizontal symmetry for a simple stimulus was ineffective in producing contour grouping. It appears from the present research that unlike vertical symmetry, horizontal symmetry requires a more complex line to be reflected to produce strong grouping. Barlow and Reeves [3] pointed out that symmetry could produce considerable processing advantages to an organism by allowing subsequent processes to deal with larger units. Gillam [20] pointed out the processing advantages of grouping in the processing of depth and motion. However, until the present studies, there is no direct evidence that symmetry produces grouping outside of figure-ground studies. The present data, however, provide evidence that symmetry results in spatio-temporal grouping if the elements reflected are sufficiently complex. This represents processing consequences of symmetry such as were foreshadowed by Barlow and Reeves [3] and shown for other stimulus factors by Gillam and colleagues (op. cit.). It does not seem likely that the grouping found for complex symmetry was occurring on other grounds.

This research was carried out when the author was on the Faculty of The State College of Optometry, SUNY, New York, NY, USA. It was supported by a grant from the U.S. National Institute of Mental Health (R01-MH30840). The author wishes to thank Tarryn Balsdon for help with the figures.

The author has no conflicts of interest with respect to this paper. 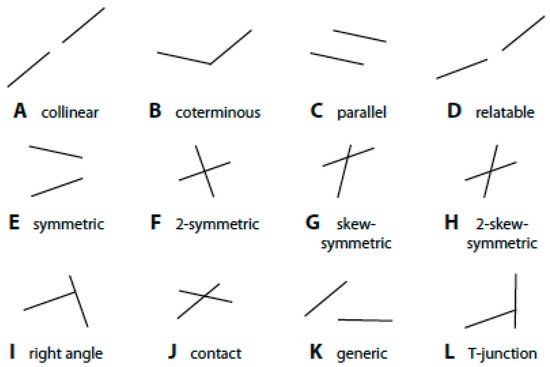 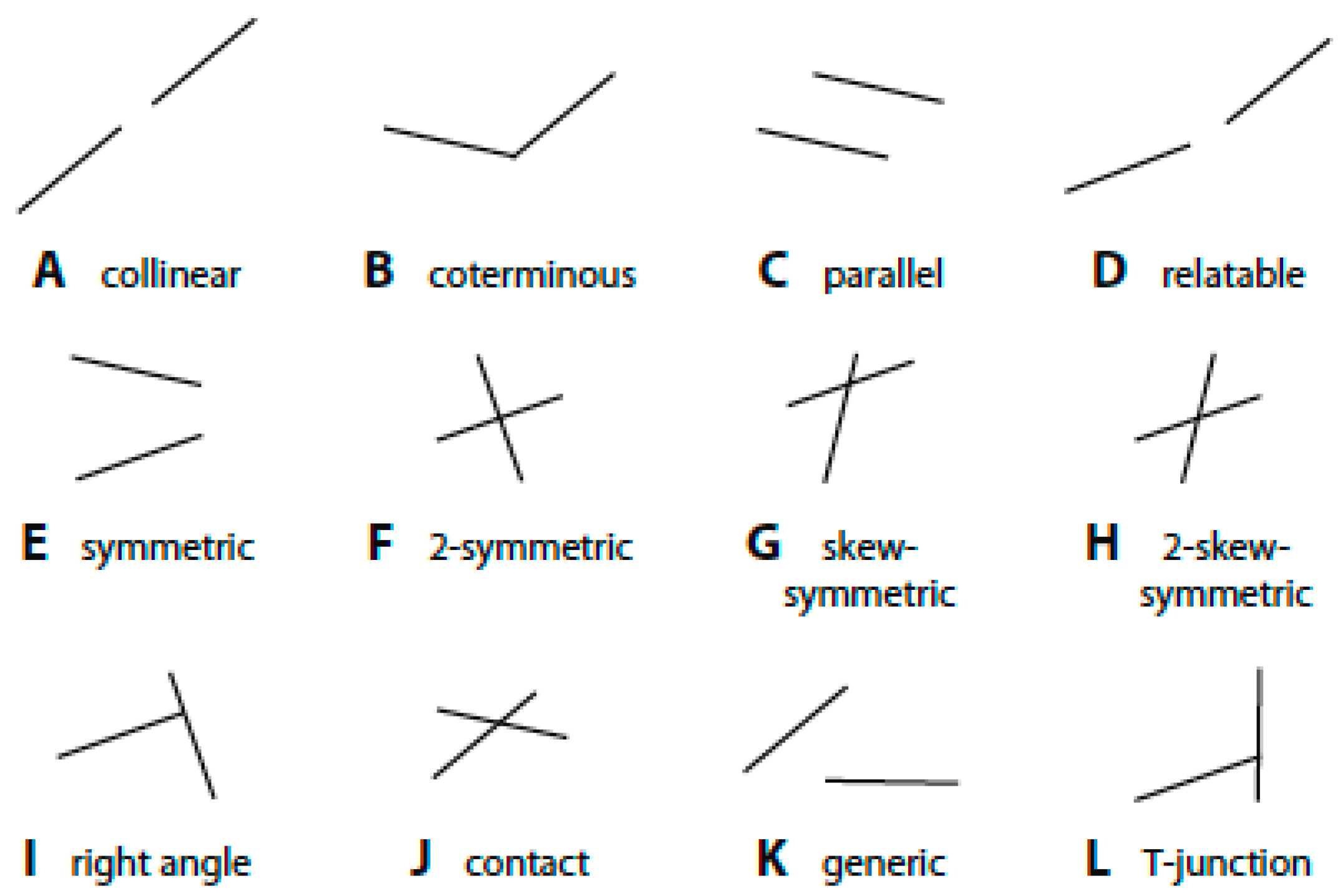 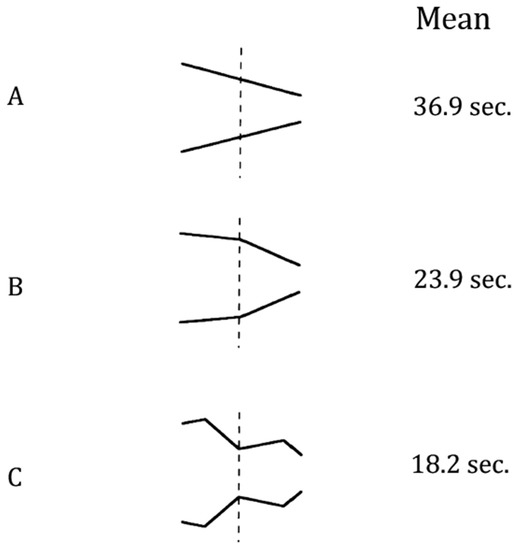 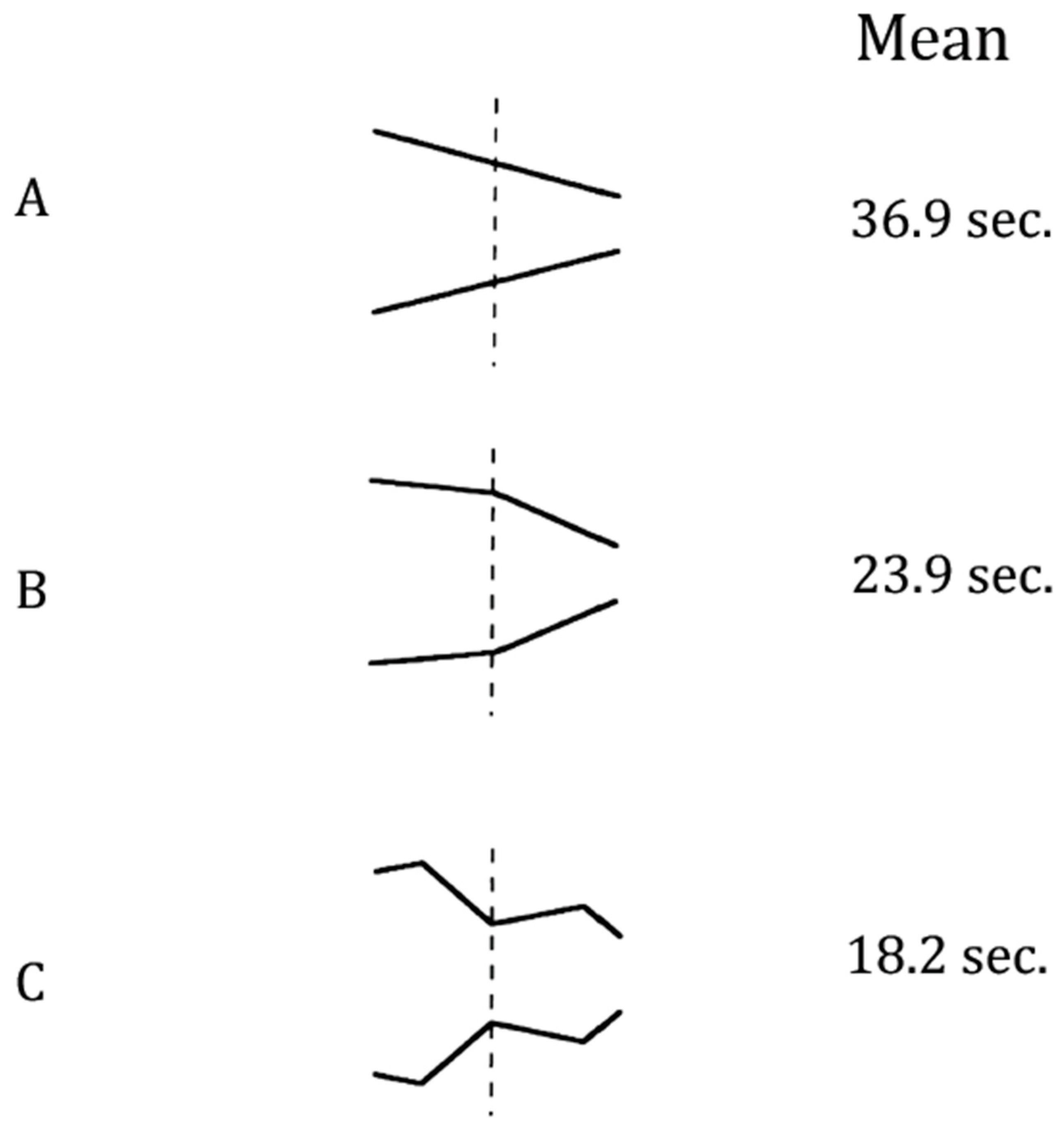 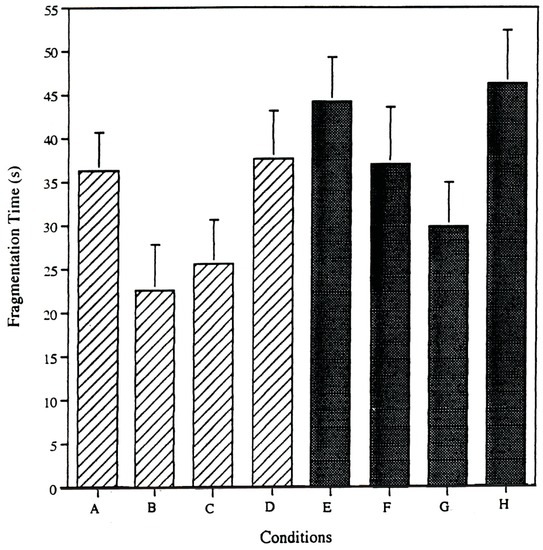