The Choice of Gadolinium-Based Contrast Agents: A Radiologist’s Responsibility between Pharmaceutical Equivalence and Bioethical Issues
Previous Article in Journal

(1)
The effect of the moving speed of the mobile charger:
(2)
Previous work failed to neglect the importance of the location of service station:
(3)
Non periodic charging problem in WRSN:
(4)
How to apply the rest sensor nodes if the residual energy of a part of nodes in the network reaches the threshold.

In this work, we combine the mobile charger and the wireless energy transfer together to provide a dynamic scheduling strategy for mobile charger based on the optimization problem. In order to achieve this goal and fully improve the utilization rate of mobile charger, the single charger scheme is adopted to recharge sensor nodes. To solve the optimization problem, a novel recharging scheduling is proposed to maximize the vacation time of mobile charger. This method can give a reasonable visiting path through the local optimum of the sub-networks. As a result, the proposed scheme can prolong the lifetime of a network significantly.
Different from the existing single mobile charger schemes, the contributions of this work are summarized briefly as following:

In order to improve the network lifetime and to consider the network service quality, in this work, a novel and optimal charging scheduling algorithm which can maximize the vacation time of the mobile charger is proposed.
The rest of this paper is organized as following. Section 2 provides the related models and problem statement. Section 3 describes the propose charging scheduling scheme, followed with the simulation of the proposed scheme in Section 4. Finally, Section 5 concludes this paper.

2.2. The Model of Energy Consumption

Give a wireless sensor network with nodes and parameters , and , the distance between any pair of nodes, find a charging path starting from service station and visit each sensor node exactly only once to charge them. In order to achieve this goal, novel scheduling algorithm is designed to maximize the time ratio of the mobile charger at the service station.
At the same time, this method should guarantee normal operation in each sub network. In order to find optimal path, we can obtain the following optimization objective function from the above analysis.
After finishing recharging for wireless sensor node, mobile charger returns back to the service station to be serviced and gets ready for the next charging trip. The time for the mobile charger staying at the service station is called vacation time denoted by The symbol represents the Equation (5). It is very difficult to solve the above optimization function. In this paper, the network is divided into several sub networks.

(1)
Compute the shortest distance in each sub network using Floyd algorithm.
(2)
Calculate the distance between each sensor node and its farthest sensor node . can be expressed as .
(3)
Find the minimum , that is to say, .

3.2. The Selection of Active Nodes

The work is supported by research support fund for teachers in Jining Medical University (No. JY2017KJ053).

The authors declare no conflict of Interest. 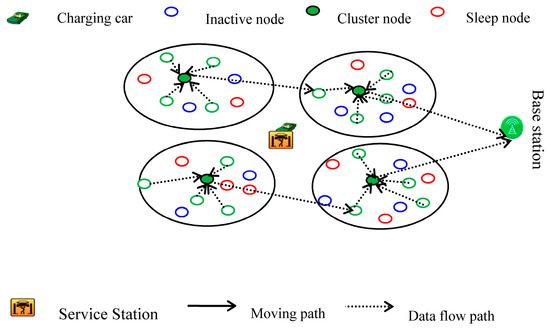 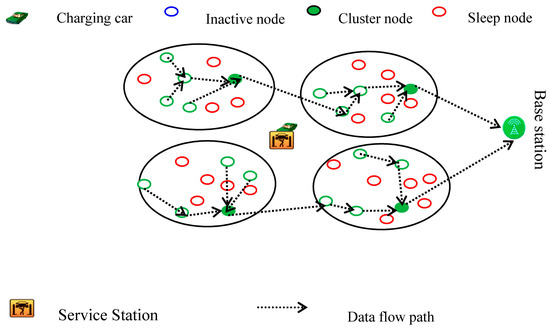 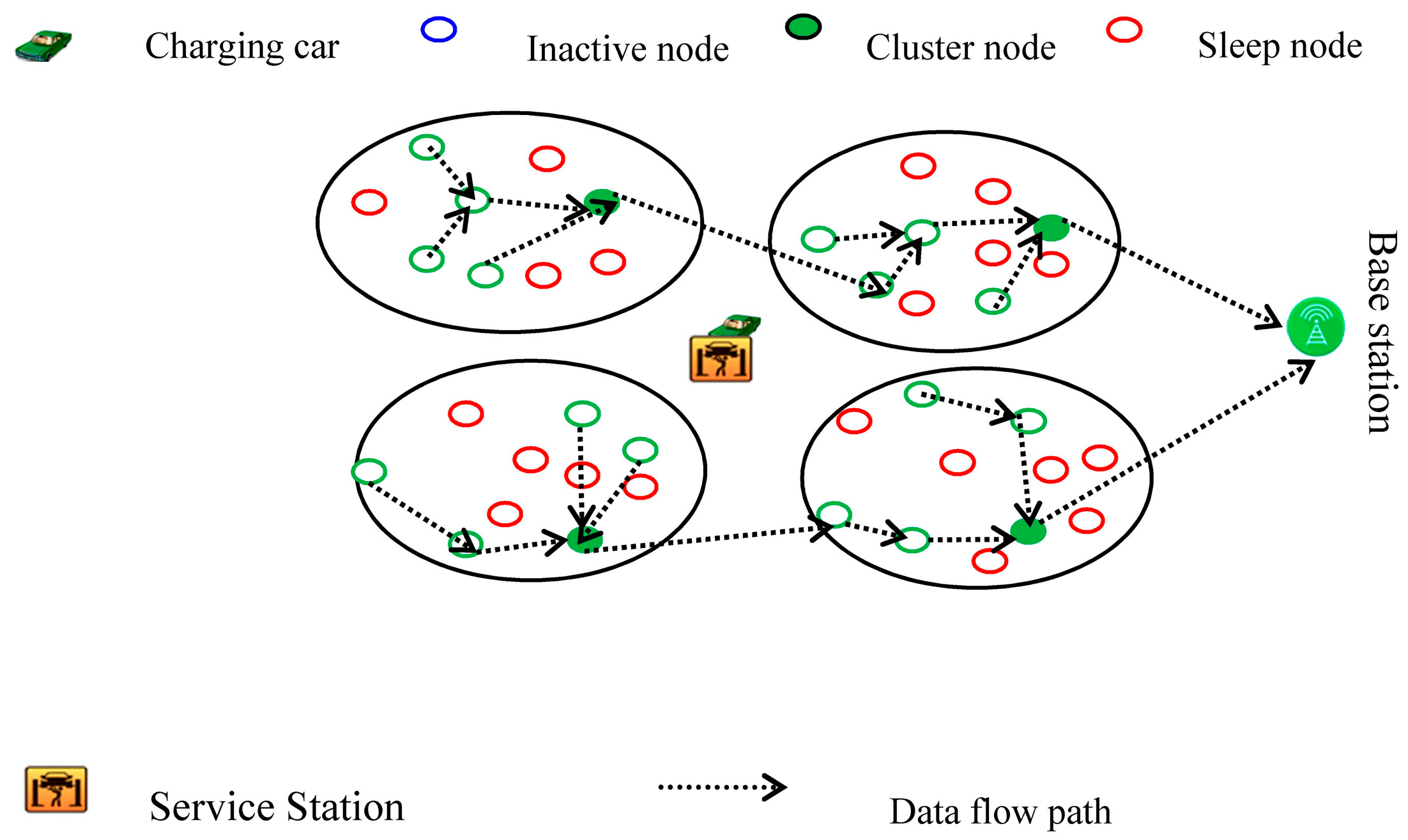 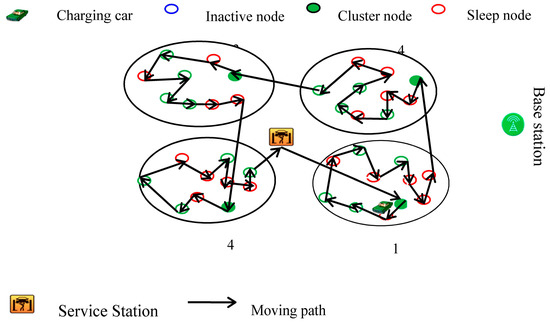 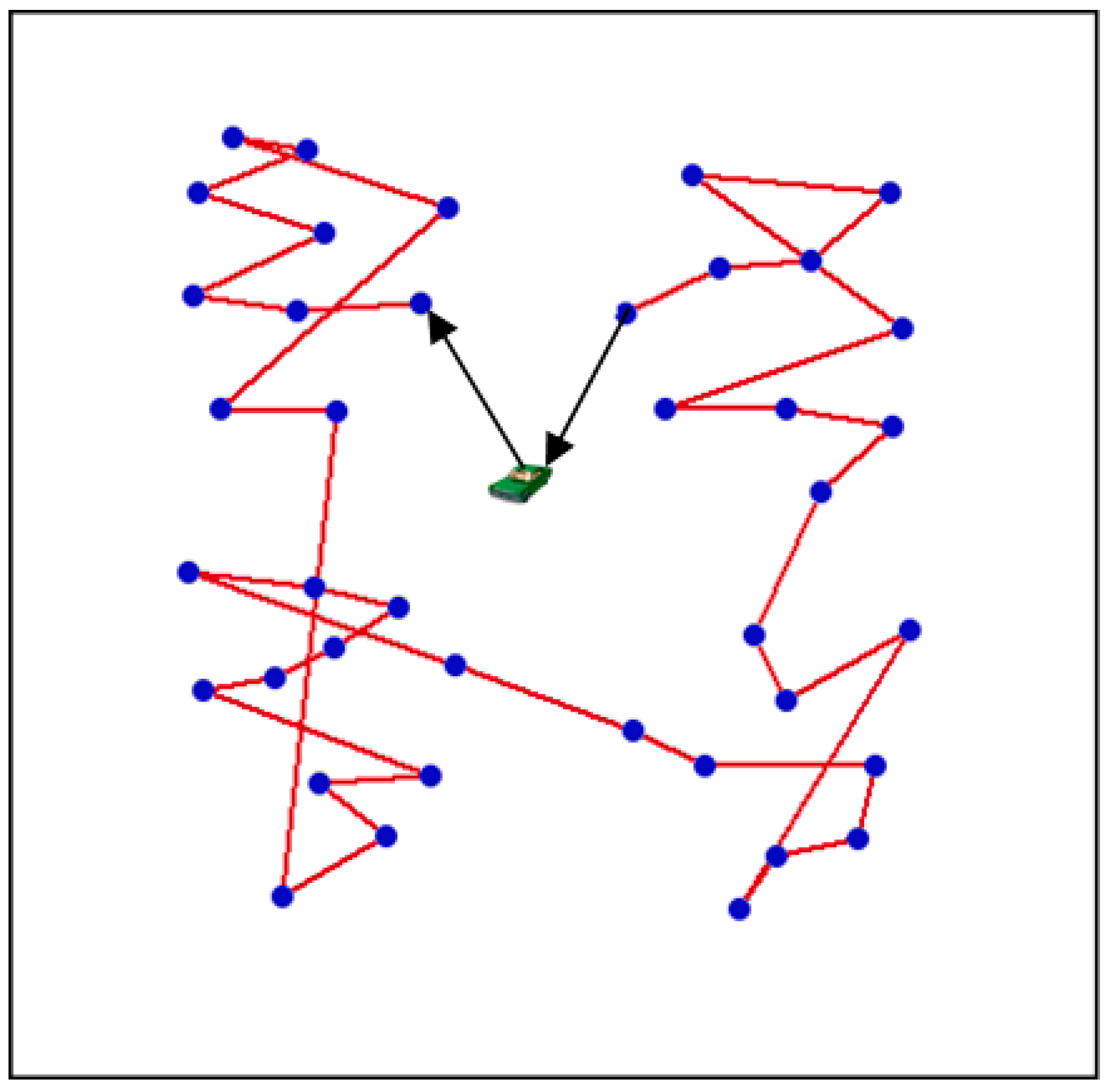 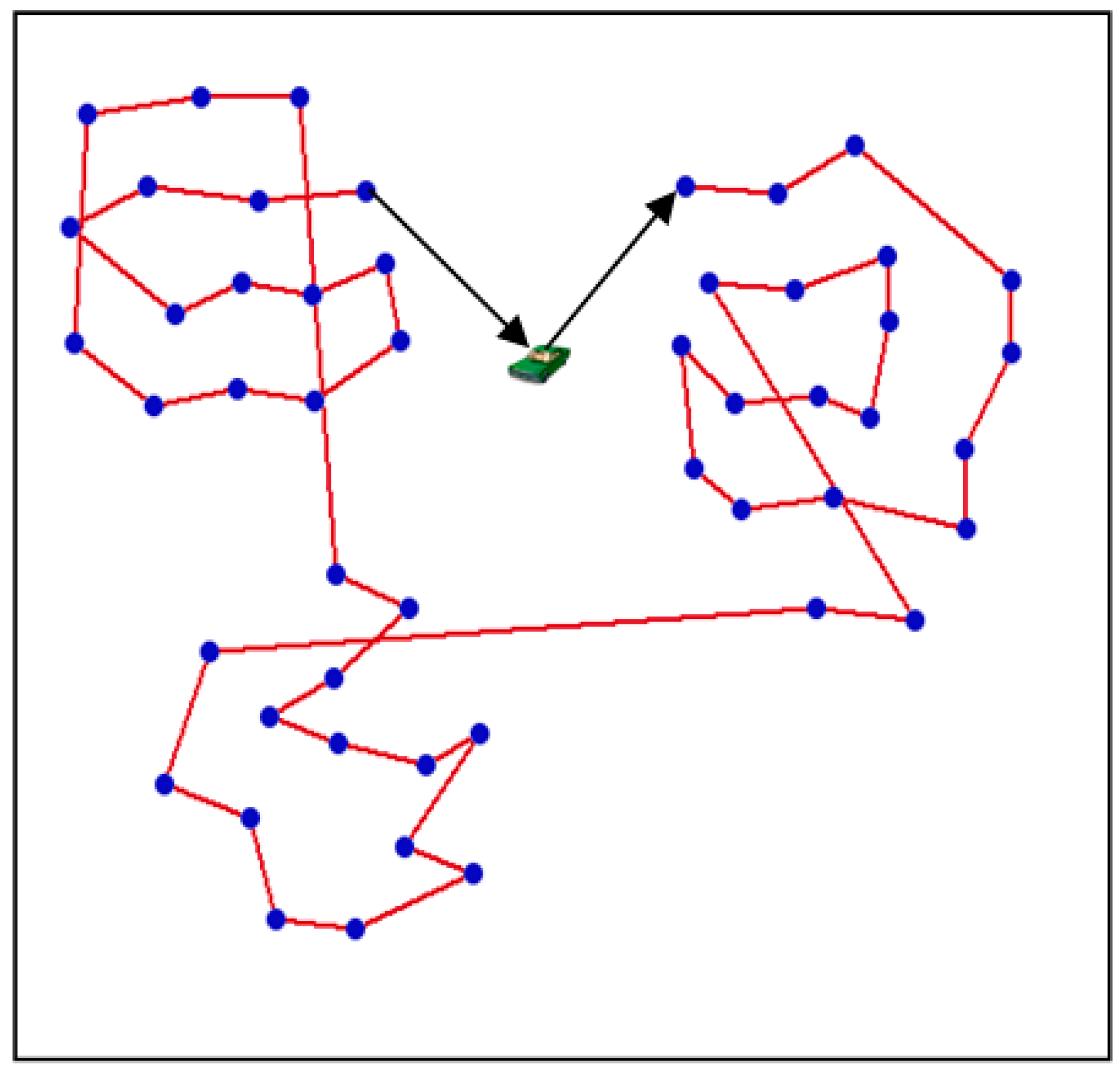 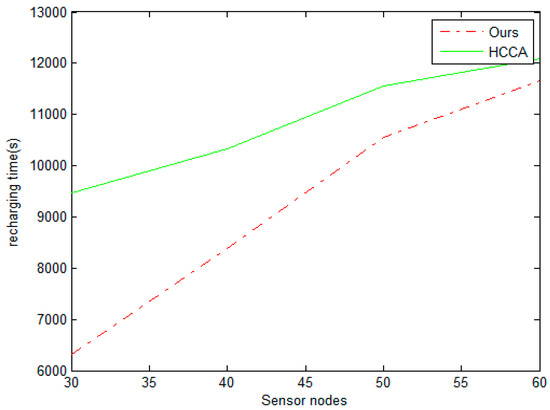 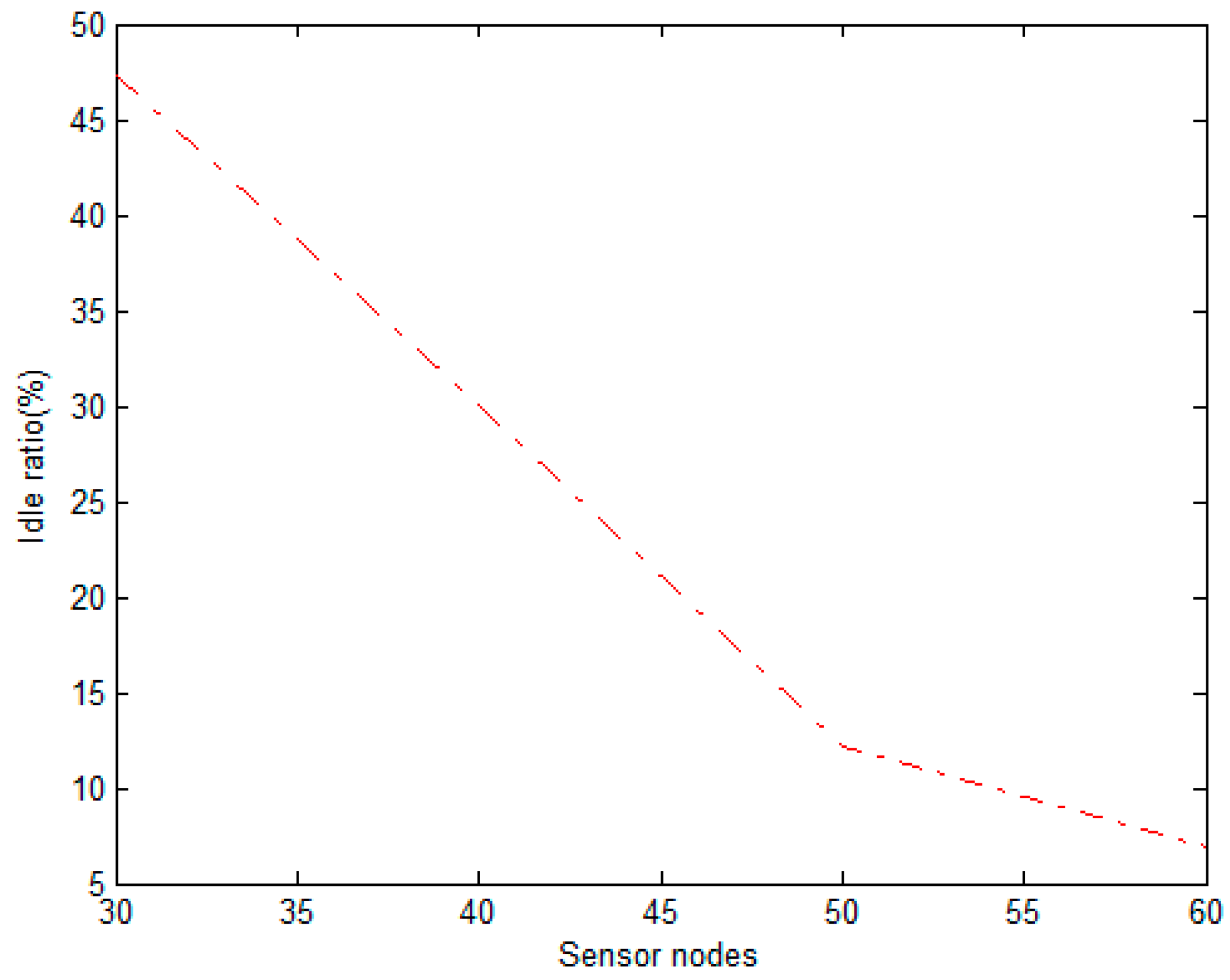