2-Pyridylselenenyl versus 2-Pyridyltellurenyl Halides: Symmetrical Chalcogen Bonding in the Solid State and Reactivity towards Nitriles

:
The synthesis of 2-pyridyltellurenyl bromide via Br2 oxidative cleavage of the Te–Te bond of dipyridylditelluride is reported. Single-crystal X-ray diffraction analysis of 2-pyridyltellurenyl bromide demonstrated that the Te atom of 2-pyridyltellurenyl bromide was involved in four different noncovalent contacts: Te⋯Te interactions, two Te⋯Br ChB, and one Te⋯N ChB contact forming 3D supramolecular symmetrical framework. In contrast to 2-pyridylselenenyl halides, the Te congener does not react with nitriles furnishing cyclization products. 2-Pyridylselenenyl chloride was demonstrated to easily form the corresponding adduct with benzonitrile. The cyclization product was studied by the single-crystal X-ray diffraction analysis, which revealed that in contrast to earlier studied cationic 1,2,4-selenadiazoles, here we observed that the adduct with benzonitrile formed supramolecular dimers via Se⋯Se interactions in the solid state, which were never observed before for 1,2,4-selenadiazoles.
Keywords:
nitriles; noncovalent interactions; chalcogen heterocycles; chalcogen bonding; tellurium

The field of noncovalent interactions has experienced rapid growth and constitutes one of the most intensely studied areas of current chemistry. Noncovalent interactions allow the design and construction of supramolecular materials and control of their ultimate architectures and symmetry [1,2]. Importantly, the properties of supramolecular aggregates are different from the sum of the constituent molecules [1,3,4,5,6,7,8,9]. Recently, chalcogen bonding (ChB) has emerged as a powerful tool for the creation of such materials. In contrast to halogen bonding (XB) or hydrogen bonding (HB), usage of ChB in crystal engineering, preparative chemistry, sensing, etc., is still emerging [10].
We have recently showcased that the addition of 2-pyridylselenenyl halides to a triple CN bond of unactivated nitriles resulted in the formation of novel cationic 1,2,4-selenadiazoles [11]. Moreover, we showed that the Se atom in the adducts of 2-pyridylselenenyl halides and nitriles could provide two σ-holes and act as a donor ChB (Figure 1).
It is worth mentioning that chalcogen diazoles are appealing research objects due to their utilization in the preparation of soft materials with tunable physical parameters [12,13,14,15]. ChB allows modulation of the self-assembly and, therefore, fine-tuning of charge transport within these heterocycles.
Here we describe the synthesis and crystal structure of 2-pyridyltellurenyl bromide, compare its self-assembly in the solid-state with structurally similar selenium congener, 2-pyridylselenenyl chloride, and compare the reactivity of these two 2-pyridylchalcogenenyl halides towards benzonitrile. Interestingly, while 2-pyridylselenenyl chloride readily forms an adduct with PhCN, the Te analog does not react with benzonitrile or any other simple nitrile tested in the framework of the current study. 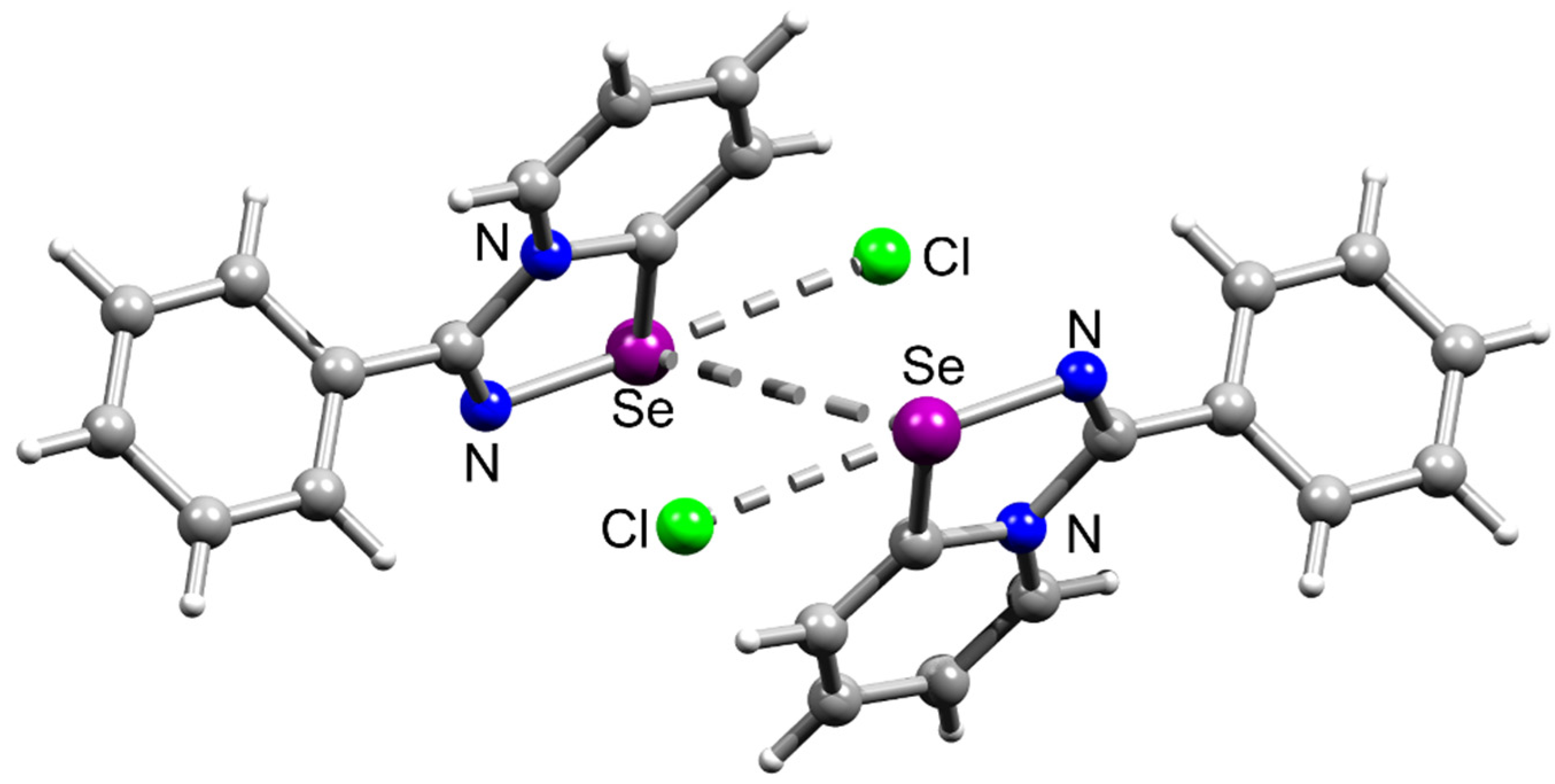