Over the years, various models have been developed in the stages of the mining process that have allowed predicting and enhancing results, but it is the breakage, the variable that connects all the activities of the mining process from the point of view of costs (drilling, blasting, loading, hauling, crushing and grinding). To improve this process, we have designed and developed a computational model based on an Artificial Neural Network (ANN), the same that was built using the most representative variables such as the properties of explosives, the geomechanical parameters of the rock mass, and the design parameters of drill-blasting. For the training and validation of the model, we have taken the data from a copper mine as reference located in the north of Chile. The ANN architecture was of the supervised type containing: an input layer, a hidden layer with 13 neurons and an output layer that includes the sigmoid activation function with symmetrical properties for optimal model convergence. The ANN model was fed-back in its learning with training data until it becomes perfected, and due to the experimental results obtained, it is a valid prediction option that can be used in future blasting of ore deposits with similar characteristics using the same representative variables considered. Therefore, it constitutes a valid alternative for predicting rock breakage, given that it has been experimentally validated, with moderately reliable results, providing higher correlation coefficients than traditional models used, and with the additional advantage that an ANN model provides, due to its ability to learn and recognize collected data patterns. In this way, using this computer model we can obtain satisfactory results that allow us to predict breakage in similar scenarios, providing an alternative for evaluating the costs that this entails as a contribution to the work. View Full-Text
Keywords: artificial neural networks; rock breakage; rock blasting artificial neural networks; rock breakage; rock blasting
►▼ Show Figures 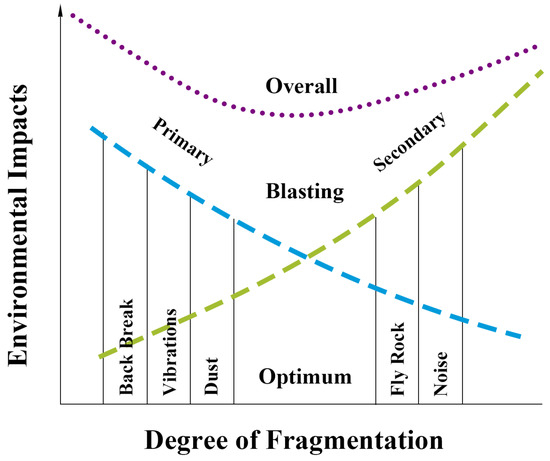