In quantum systems, measurements can be seen as quantum operations [44]. Quantum operations are very important in describing quantum systems that interact with the environment.
Let be the set of bounded linear operators on the separable complex Hilbert space H; is the state space of consideration. Suppose is a collection of operators ’s satisfying . A map of the form is called a quantum operation [32], quantum operations can be used in quantum measurements of states. If the ’s are self adjoint then, is self-adjoint.
General quantum measurements that have more than two values are described by effect-valued measures [32]. Denote the set of quantum effects by Consider the discrete effect-valued measures described by a sequence of satisfying where the sum converges in the strong operator topology. Therefore, the probability that outcome i occurs in the state is and the post-measurement state given that i occurs is [32]. Furthermore, the resulting state after the execution of measurement without making any observation is given by
If the measurement does not disturb the state , then we have (fixed point equation).
Furthermore, the probability that an effect A occurs in the state given that, the measurement was performed is
If A is not disturbed by the measurement in any state we have and by defining , we end up with .
More measurements are frequently used in quantum dynamics, quantum computation and quantum information theory [37,45,46].
Henceforth we will be dealing with a two-level single qubit quantum system. Where a quantum state can be described as (see [37]). Considering the representation of a two-level quantum system by the Bloch sphere (Figure 1) above, a quantum state () can be represented with the below density matrix ,
Furthermore, the density matrix can also take below representation [37], where is the Bloch vector with , and for being the Pauli matrices.
Note that the Bloch vectors with norm less than one are associated to the mixed quantum states, whereas Bloch vectors with norm equals one are associated to the pure quantum states.
Let be two quantum states in a two level quantum system. Then, the Bures fidelity [47] between the quantum states and is defined as (see [47]). The Bures fidelity satisfies , it is 1 if and 0 if and have an orthogonal support (perfectly distinguishable) [37].
Now consider a two-level quantum system X represented with the collection of density matrices . Define the function by
It is easy to show that is a b-metric on X (partial b-metric) with . Define an order relation ⪯ on X by
It is obvious that, the order relation defined above (29) is a partial order.
Corollary 5.
Let be a complete partial b-metric space associated with the above order ⪯ (29). Suppose an order-preserving quantum operation that satisfies either conditions in Theorems 1 or 2. Then, T has a fixed point.
Below example covers both Theorems 1 and 2. However, we precisely execute the solution procedure in favour of Theorem 1.
Example 4.
Consider the depolarising quantum operation T on the Bloch sphere X; with the depolarising parameter . Let the comparable quantum states satisfy (29).
We will check that, satisfy all the conditions of our theorem(s), as such, it has a unique fixed point.
Now, let . If the order ⪯ is as defined in (29), we will start by showing T is order-preserving. Note that, T is order-preserving if the angle of rotation describing any two comparable quantum states is invariant under T, and the distance from origin to is less than or equal to the distance from origin to , i.e., if then .
Therefore, using the Bloch sphere representation of states in a two-level quantum system below we proceed as follows,
Clearly, the angles and are not affected by the depolarising quantum operation T. Furthermore, we can deduce that the distance of the quantum state from origin given by is greater than or equal to the distance of the new quantum state from origin given by , . Therefore, for any two comparable quantum states , with respective distances from origin and such that, , the depolarising quantum operation T produces two quantum states , with respective distances from origin and for . As , then . Thus, ; T is order-preserving.
The fidelity of any two quantum states and can take the form (see, [48]), where is the inner/dot product between the vectors and . So, for any comparable quantum states and , for being the angle between and . Using Equation (30), one can show that,
Thus, for , .
Furthermore, using the condition is imposed on both Theorems 1 and 2. From the known facts and definitions, we proceed as
Taking , condition (3) in Theorem 1 is satisfied. A similar procedure can be used to prove the compliance of condition (22) in Theorem 2. Finally, in reference to Theorem 1, we conclude that T has a unique fixed point (centre). A similar conclusion can be attained using Theorem 2.
Example 5.
Consider the quantum operation known as the generalised amplitude damping on the Bloch sphere X defined aswith damping parameter and . Let the comparable quantum states satisfies (29). Then, T has a fixed point.
In a similar way as we demonstrated in Example 4, one can show the existence of the invariant state for the generalised amplitude damping T as presented in Equation (31). The effect of the generalised amplitude damping is like a flow of states on the Bloch sphere (Unit ball) towards the fixed state . The generalised amplitude damping can be used in description of energy dissipation effects due to loss of energy from a quantum system. Note that, the invariant state is unique for every

The results in this paper cover some part of the famous contractive fixed point results of Banach [11], Kannan [26] and Chatterjea [23]. The contractive conditions (3) and (22) presented can be seen as an improvement to the work of Batsari et al. [18], Du et al. [21] and Dung et al. [40]; as the conditions contain both maximum and minimum functions. Moreover, our results are generalisations of many other existing results in terms of the space in consideration (partial-b metric space).
On the other hand, although the fidelity function is not a metric, we have shown how it can be utilised in studying fixed points of some quantum operations. Moreover, the existence of fixed points of some quantum operations can be studied without given much attention to the quantum effects as seen from Examples 4 and 5. Thus, the criteria and procedure we presented can serve as an alternative in guaranteeing the existence and finding the fixed points of some quantum operations respectively if compared with the existing ones provided by Lüders [38] and Busch et al. [45]. Our choice for using depolarising and generalised amplitude damping quantum operations was related to their importance as source of quantum error and in description of energy dissipation effect respectively. 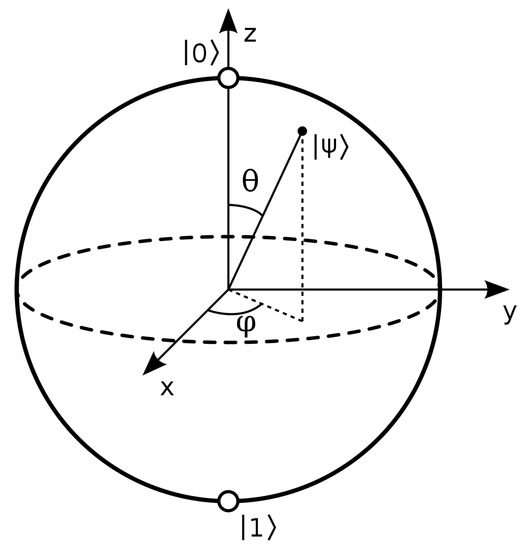