Conversion of Dual-Use Technology: A Differential Game Analysis under the Civil-Military Integration

Military and civilian technological production occurs in two different market environments. Military technology has lengthy experimental and production cycles, with high technical demands and costs in an independent and autonomous market. In contrast, the civilian industry exists in an open and quickly changing macroeconomic environment, which needs lower prices, higher qualifications, and more product functions to attract consumers. Hence, when military and civilian firms enter each other’s market, they could face complex competitive and cooperative relationships in the process of dual-use technology conversion.

The mode of mix means a military firm and a civilian firm produce dual-use technology, which requires the military firm and the civilian firm to have similar characteristics, including market demand, technology standards, and equipment performance. Dual-use technologies meet both the high standards characteristic of military technology and the practical applicability of civilian technology. In mix mode, the relationship between a military firm and a civilian firm is complicated and includes competition and cooperation. The maximization of overall utility is the common goal for both sides. Both firms can choose their optimal effort levels and share the revenue function of dual-use technology conversion based on the maximization of their total payoff. Therefore, we chose the cooperative game to describe this model. We can assume that the objective function of Mix is: where is the discount rate of dual-use technology.
To obtain the equilibrium of the cooperative game, it is assumed that is the optimal revenue function, which is bounded and continuously differentiable. Hamilton–Jacobi–Bellman equation is used to calculate the optimal revenue function:
To maximize profits, we use extreme conditions and search for the optimal effort of military and civilian firms by setting the first partial derivative equal to zero, to give:
By substituting the results of (35a,b) into (34), we can get:
The solution of the HJB equation is a linear optimal return function for K as an independent variable. Let: where and are constant.
Substituting Equation (37) into Equation (36) gives:
Hence, the optimal effort level and subsidy factor in the mix model can be expressed as follows:
The overall optimal revenue function for the military firm and the civilian firm in the mix model can be expressed as follows:
Under a cooperative equilibrium, we can obtain the limit of expectation and variance of the dual-use technology level. The proof process is the same as that for Equations (13)–(16). The limits of expectation and variance can be expressed as: where .

We find that the optimal revenue of dual-use technology conversion in the equilibrium results of spin-in is better than in spin-off for both firms.
According to , the order of total revenue is . This indicates that the overall system can achieve the best payoff when military and civilian firms cooperate to undertake the bidirectional dual-use technology conversion. Furthermore, the overall system in the spin-in mode under the Stackelberg equilibrium condition has the second-highest payoff.

Comparing the expectation and variance of the improvement degree of the dual-use technology level in the three modes allows measurement of the stability of the technology development in the conversion. The comparing process is as follows:
Similarly, we can get
The first derivative of is greater than 0 for . can be obtained by , and can then be obtained. Similarly, can be obtained. Thus, there exists:
This indicates that the mix mode can develop dual-use technology more readily than the other two modes, followed by the spin-in mode. In contrast, the greater the improvement of dual-use technology, the less the stability achieved by the firms. When the military firm and the civilian firm cooperate and jointly develop dual-use technology, they are subject to more risk and random interference factors. This illustrates that dual-use technology development is significantly influenced by the mode of conversion on increment and stability.
In the collaborative environment, both military and civilian firms make decisions with the goal of overall system optimization, which can decrease the threshold of conversion, advance the efficiency of technology innovation, and ultimately maximize the total benefits. Therefore, the mix mode can reach Pareto optimality in terms of the effort, the revenue, and the technology development.

To illustrate the theoretical results, we conducted a numerical analysis. The values of the parameters are shown in Table 2. The results under the three game models, in terms of the effort of military and civilian participants, and each optimal revenue level, are shown in Table 3.
From Table 3, the differences between the military firm and the civilian firm in the cases of spin-off, spin-in, and mix modes can be examined. The effort levels for both firms were improved sequentially by the three modes. This is particularly the case for the civilian firm; civilian revenue was higher than that of military participants in all three cases. Moreover, the total revenue was highest when the firms chose the spin-in mode.

According to Equations (45) and (46), revenue for each of the firms, military and civilian, and total revenue, were consistent with the simulation, as shown in Figure 3. The ultimate benefits for both military and civilian firms grow and ultimately reach a steady-state. Mix is the optimal choice to maximize income for both military and civilian firms and in the context of overall returns. These trends were also consistent with the growth of dual-use technologies. All three models of the CMI effectively contribute to an increase in both firms’ earnings, and there is a positive correlation between the increase in earnings and the state of technological development.

This article used the mathematical model and analysis without any real data. 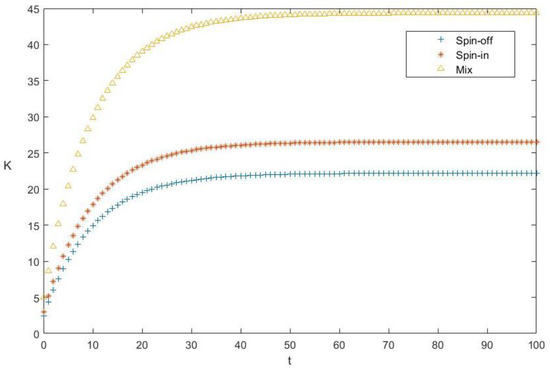 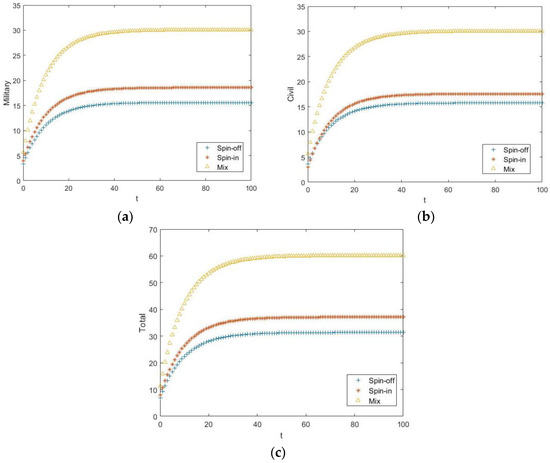 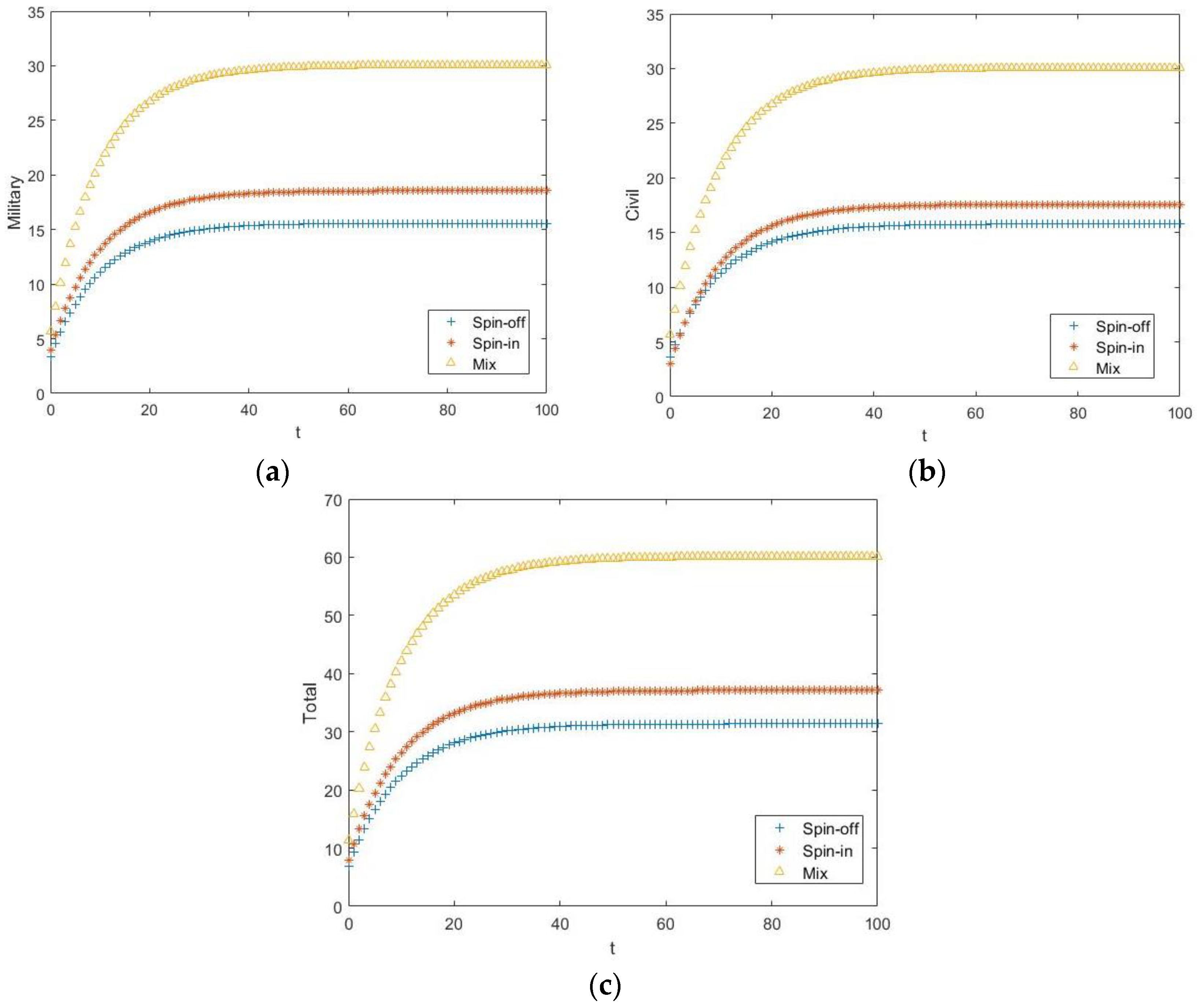 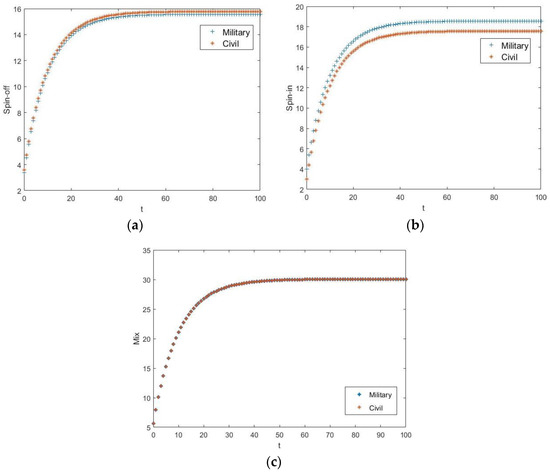 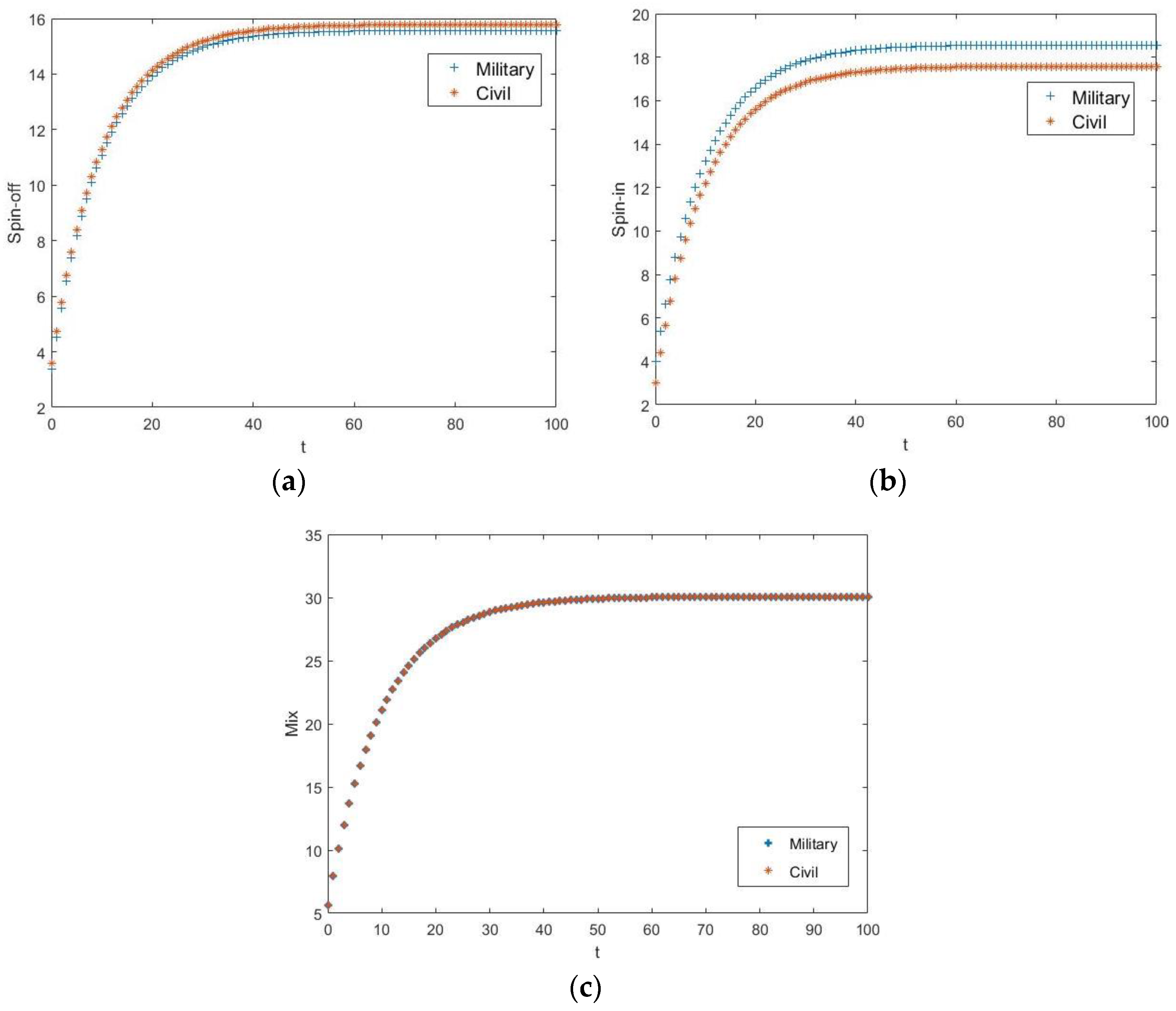