Multiquadrics without the Shape Parameter for Solving Partial Differential Equations

In this article, we present multiquadric radial basis functions (RBFs), including multiquadric (MQ) and inverse multiquadric (IMQ) functions, without the shape parameter for solving partial differential equations using the fictitious source collocation scheme. Different from the conventional collocation method that assigns the RBF at each center point coinciding with an interior point, we separated the center points from the interior points, in which the center points were regarded as the fictitious sources collocated outside the domain. The interior, boundary, and source points were therefore collocated within, on, and outside the domain, respectively. Since the radial distance between the interior point and the source point was always greater than zero, the MQ and IMQ RBFs and their derivatives in the governing equation were smooth and globally infinitely differentiable. Accordingly, the shape parameter was no longer required in the MQ and IMQ RBFs. Numerical examples with the domain in symmetry and asymmetry are presented to verify the accuracy and robustness of the proposed method. The results demonstrated that the proposed method using MQ RBFs without the shape parameter acquires more accurate results than the conventional RBF collocation method with the optimum shape parameter. Additionally, it was found that the locations of the fictitious sources were not sensitive to the accuracy.
Keywords: shape parameter; multiquadric; radial basis function; fictitious source point; meshless method shape parameter; multiquadric; radial basis function; fictitious source point; meshless method

The meshfree methods recognized as powerful tools to solve practical problems governed by partial differential equations (PDEs) have attracted considerable attention [1,2,3]. These methods have the advantage that it does not require mesh construction [4]. Engineering problems involving irregular geometry are usually intractable. For such problems, the use of the meshfree methods to acquire approximate solutions is advantageous. Several meshfree methods utilizing approximation functions, such as moving least squares, reproducing kernel collocation method, Trefftz method, and element-free Galerkin method [5,6], have been widely used for solving engineering problems. The complexities involved in the solution of the governing equations require advanced mathematical approaches, such as the radial basis function collocation method (RBFCM) [7,8]. The development of the RBFCM in the application of advanced mathematical modeling has raised much attention recently because of its meshfree characteristics and computational efficiency [9,10]. The RBFCM is probably one of the popular methods for finding the solutions of boundary value problems with the domain in symmetry and asymmetry where the variables could be expressed by using the function approximation [11,12].
A variety of the radial basis functions (RBFs) may be adopted, such as the Gaussian [13], multiquadric (MQ) [14], inverse multiquadric (IMQ) [15], and thin plate spline (TPS) functions [16]. Among them, the multiquadric function may obtain more accurate solutions than other RBF interpolations [8] and is often utilized as the RBF interpolation for dealing with PDEs. In the MQ interpolation, the role of an arbitrary constant, namely, the shape parameter, is necessary. Attempts to identify the optimum shape parameter have been widely investigated [17,18,19,20]; however, identifying the suitable shape parameter in the MQ interpolation remains an issue.
Numerical examples, including a two-dimensional wave problem, a two-dimensional groundwater flow problem, and a two-dimensional unsaturated flow problem, are presented to verify the accuracy and robustness of the proposed method. This article is arranged as follows. In Section 2, we present the formulation of the proposed collocation method. Section 3 is devoted to accuracy and convergence analysis. In Section 4, numerical examples are presented. Finally, the main findings of this article are summarized in Section 5.

2. The Collocation Method of the Multiquadric Radial Basis Function

The boundary value problem in two dimensions is: where is the Laplace operator, denotes the unknown, , is a bounded domain with boundary , represents the function boundary values, and D, E, G, and H are given constants. Using the RBFCM, we may write the unknown by the radial basis function as follows: where is the radial distance, , is the basis function, x is a point inside the domain, is the center point, M is the total number of center points, and is the unknown coefficient to be determined.
In the RBFCM, the RBFs, such as MQ and IMQ, are defined by a constant called the shape parameter. The MQ interpolation method was first developed by Hardy, after which Franke [21] depicted that the MQ interpolation may be one of the best methods among many interpolation schemes based on accuracy, stability, and efficiency. The RBFCM with MQ is also named the Kansa method [2]. The MQ RBF is expressed. where c is the shape parameter. The IMQ RBF is expressed as follows:
Because of the shape parameter, the MQ and IMQ RBFs and their derivatives become smooth and non-singular functions. Accordingly, the resulting interpolation matrix is also non-singular. Selecting an RBF such that the interpolation matrix is non-singular is exactly a definition for the RBF. Functions, including the Gaussian, inverse quadratic, and IMQ functions, which are completely monotone, have this property. Finding the derivative of the MQ interpolation, we obtain:
Since the MQ RBF is not a solution of the governing Equation (1), the interior points must be collocated inside the domain. The MQ RBF is applied at the center point, which is usually selected to coincide with the interior point, as depicted in Figure 1. From the above equation, we may find that it may be singular when c = 0 at , where the center points coincide with the interior points. The shape parameter, thus, should not be equal to zero to prevent singularity.
A simple collocation algorithm separating the center points from the interior points, in which the center points are regarded as the source points placed outside the domain, is proposed. Different from the conventional RBFCM that utilizes the MQ interpolation at each center point coinciding with an interior point, the center points are regarded as fictitious sources that collocate outside the domain.
The interior, boundary, and source points are therefore collocated within, on, and outside the domain, respectively, as shown in Figure 2. Since the radial distance between the interior point and the source point is always greater than zero, the MQ RBF and its derivatives in the governing equation remain smooth and globally infinitely differentiable.
Accordingly, we eliminate the shape factor from the MQ RBF. Let ; the MQ RBF becomes a simple form, , which is completely monotone and smooth because . Taking , we obtain the following equation from (6):
Now, we insert (5) into (1). Finding the derivative of (5), we obtain:
From the above equation, we obtain for . Inserting the IMQ RBF into the governing equation, we have:
The approximate solutions are imposed to satisfy the governing equation with the boundary conditions at the collocation point to evaluate the unknown coefficient. Therefore, we obtain the following system of linear equations: where A is an matrix, refers to the coefficients with a size of to be evaluated, refers to the given functions. If , where is the number of boundary points and is the number of interior points, then Equation (10) is expressed as: where is the matrix from the interior points, is the matrix from the boundary points, is the vector, and is the vector. MATLAB software was used for all computational work, including solving the above simultaneous equations. The maximum absolute error (MAE) and root mean square error (RMSE) were used to measure the accuracy, which is defined by: where refers to the scattered points in the computed domain, is the number of measuring points, and and represent the numerical and exact solutions at the ith scattered points, respectively.

Groundwater flow problems often exhibit recharge and leakage from adjacent aquifers that are governed by the Poisson equation [24]. The governing equation of the two-dimensional Poisson equation is: where N denotes the source term. In this example, the source term is considered to be , the coefficient is considered to be = 0.5 and = 10.
The two-dimensional flower-like object boundary was defined as:
The Dirichlet data were given on the boundaries utilizing the following analytical solution:
Four approaches considering the conventional RBFCM using MQ and IMQ RBFs and the proposed simple collocation method using MQ and IMQ RBFs without the shape parameter were adopted to solve this groundwater flow problem. Figure 10 shows the collocation scheme for the conventional MQ and IMQ RBFs, containing 99 center points and 150 boundary points. For the proposed collocation method using MQ and IMQ RBFs, as demonstrated in Figure 11, there is a total of 249 source points, 150 boundary points, and 99 interior points. Figure 12 shows a comparison between the MQ RBF for the conventional RBFCM using different shape parameters and the proposed collocation method with different dilation parameters. From Figure 12, the MAE of the conventional RBFCM drastically decreased from 10−1 to 10−4, while the shape parameter ranged from 0 to 5. However, the MAE of our approach remained 10−6, while the dilation parameter ranged from 0 to 5.
The IMQ RBF was studied using the same perspective. Based on Figure 13, we confirm that the proposed collocation method using the IMQ RBF without the shape parameter acquires more accurate solutions than the conventional RBFCM.

In this article, we presented RBFs, including MQ and IMQ, without the shape parameter for solving partial differential equations using the fictitious source collocation scheme. The concepts of the proposed approach were clearly described in detail. Our findings are concluded as follows: 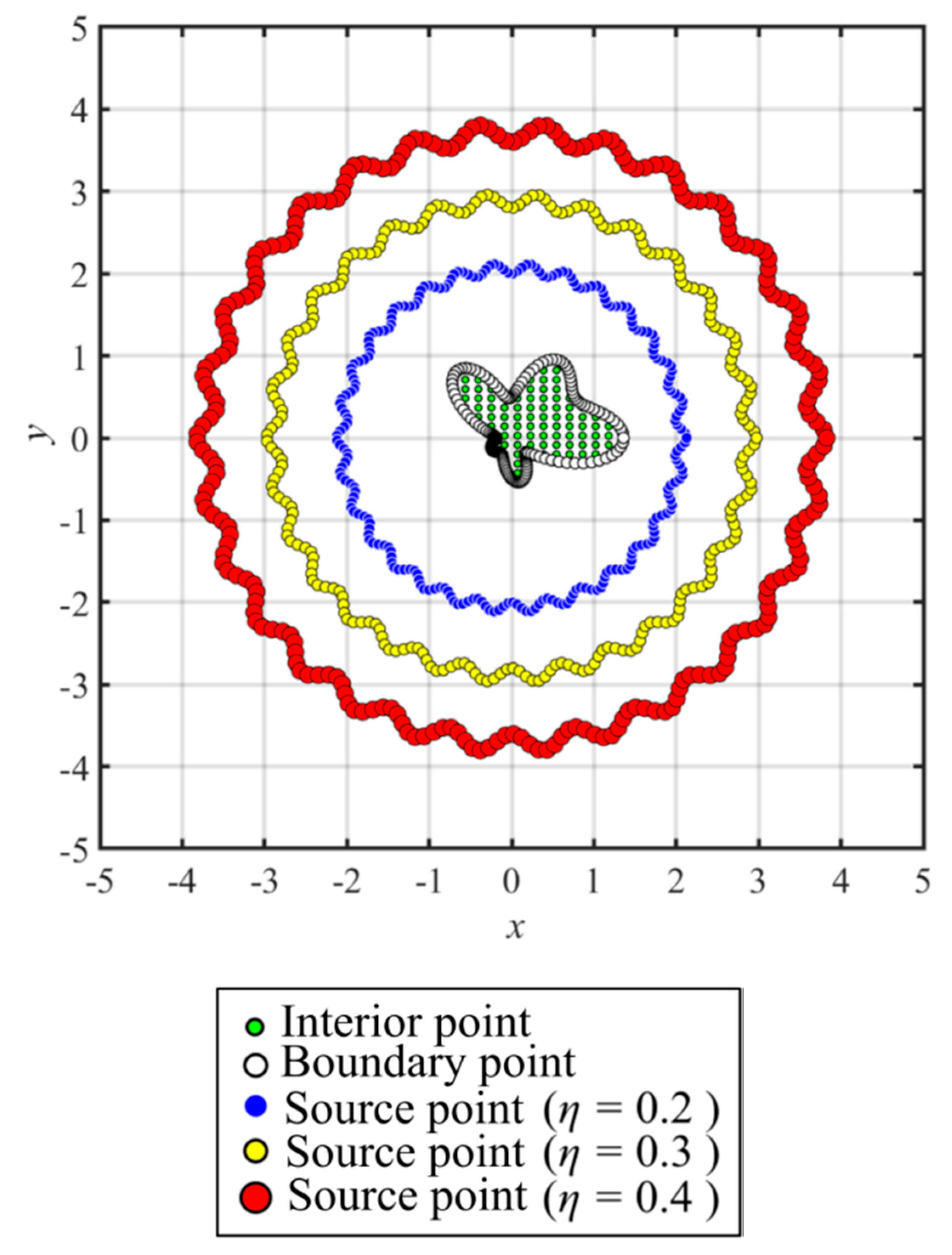 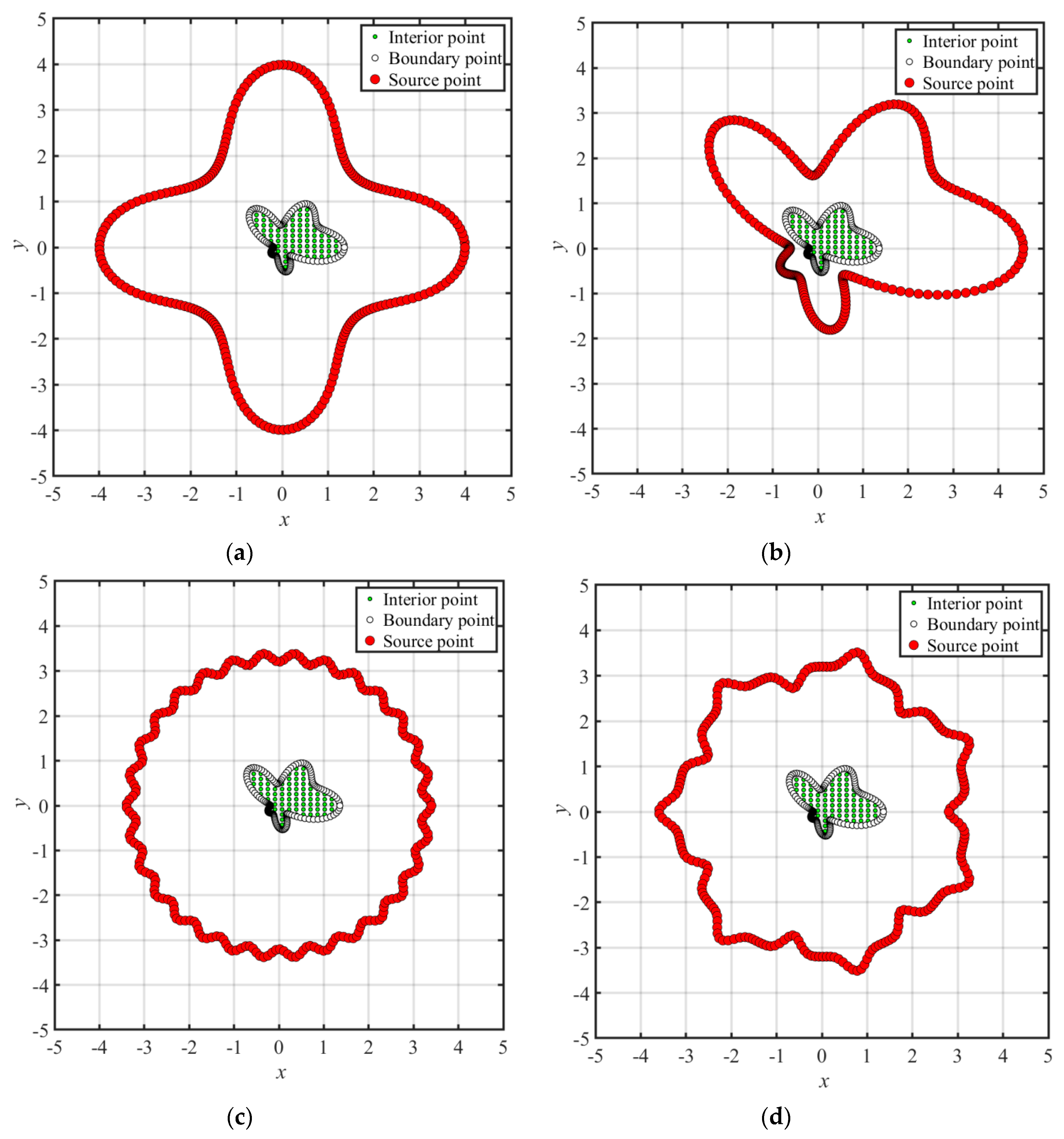 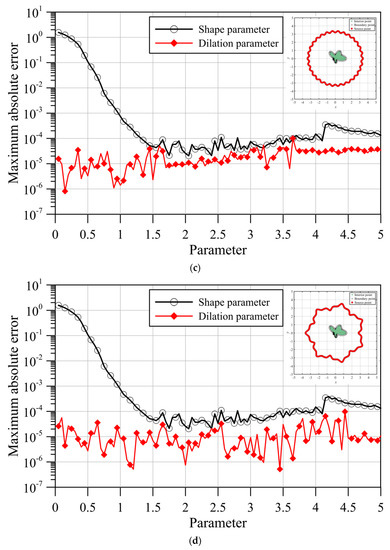 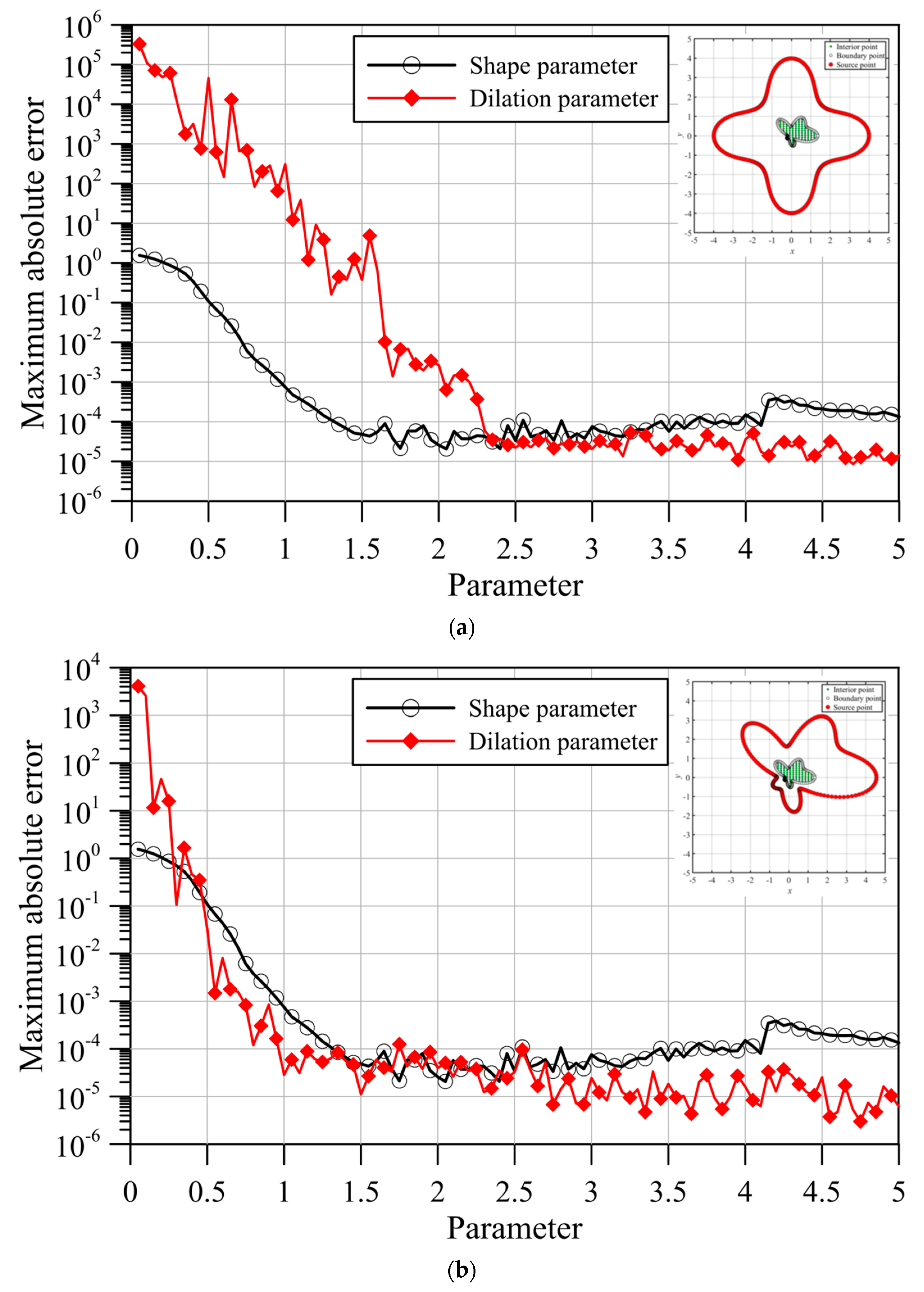 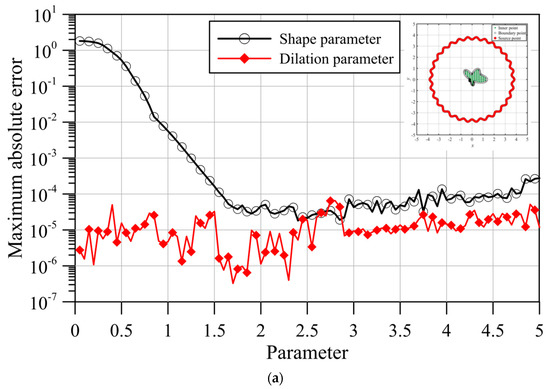 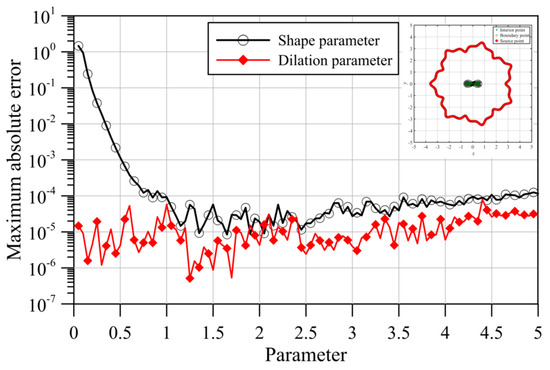 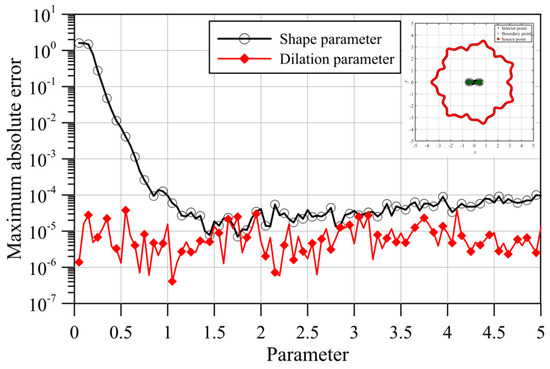 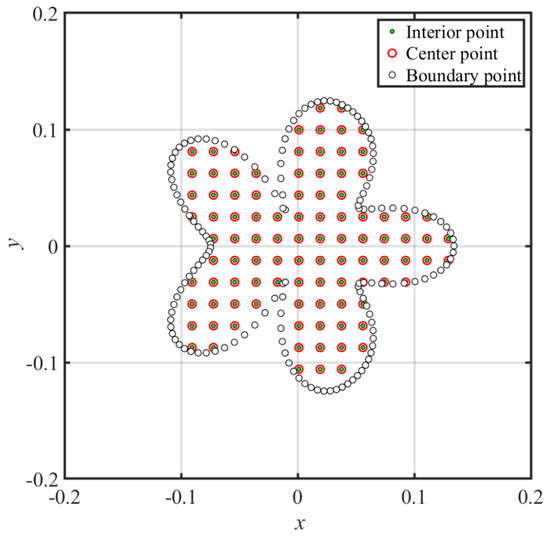 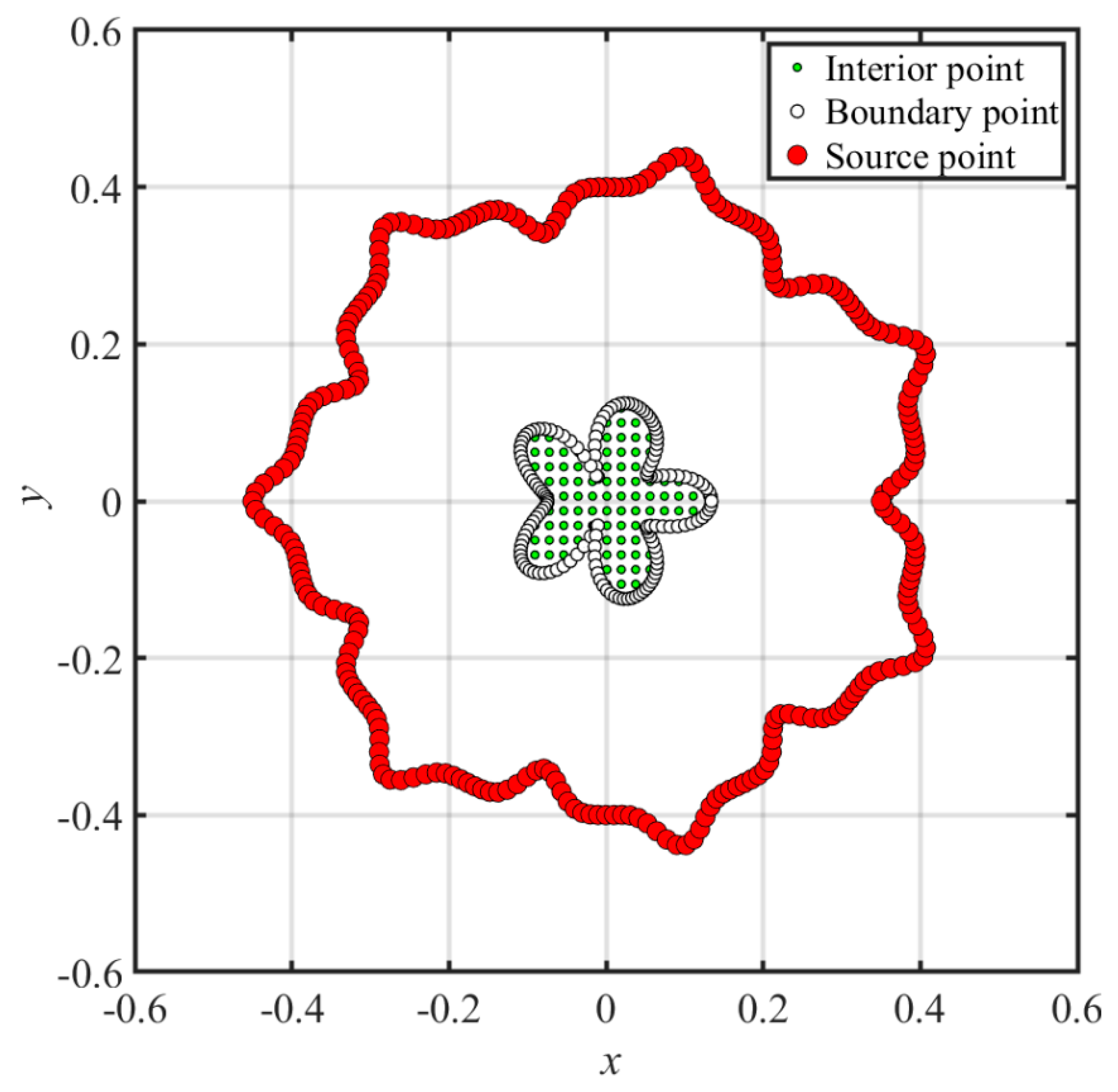 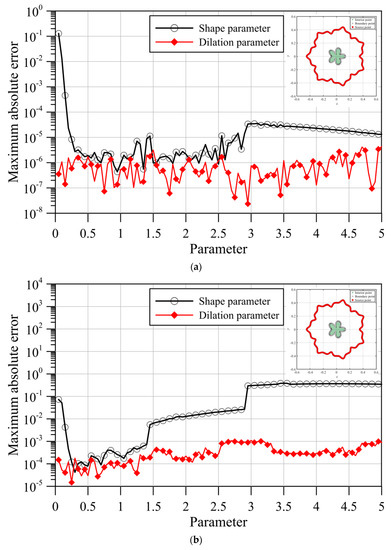 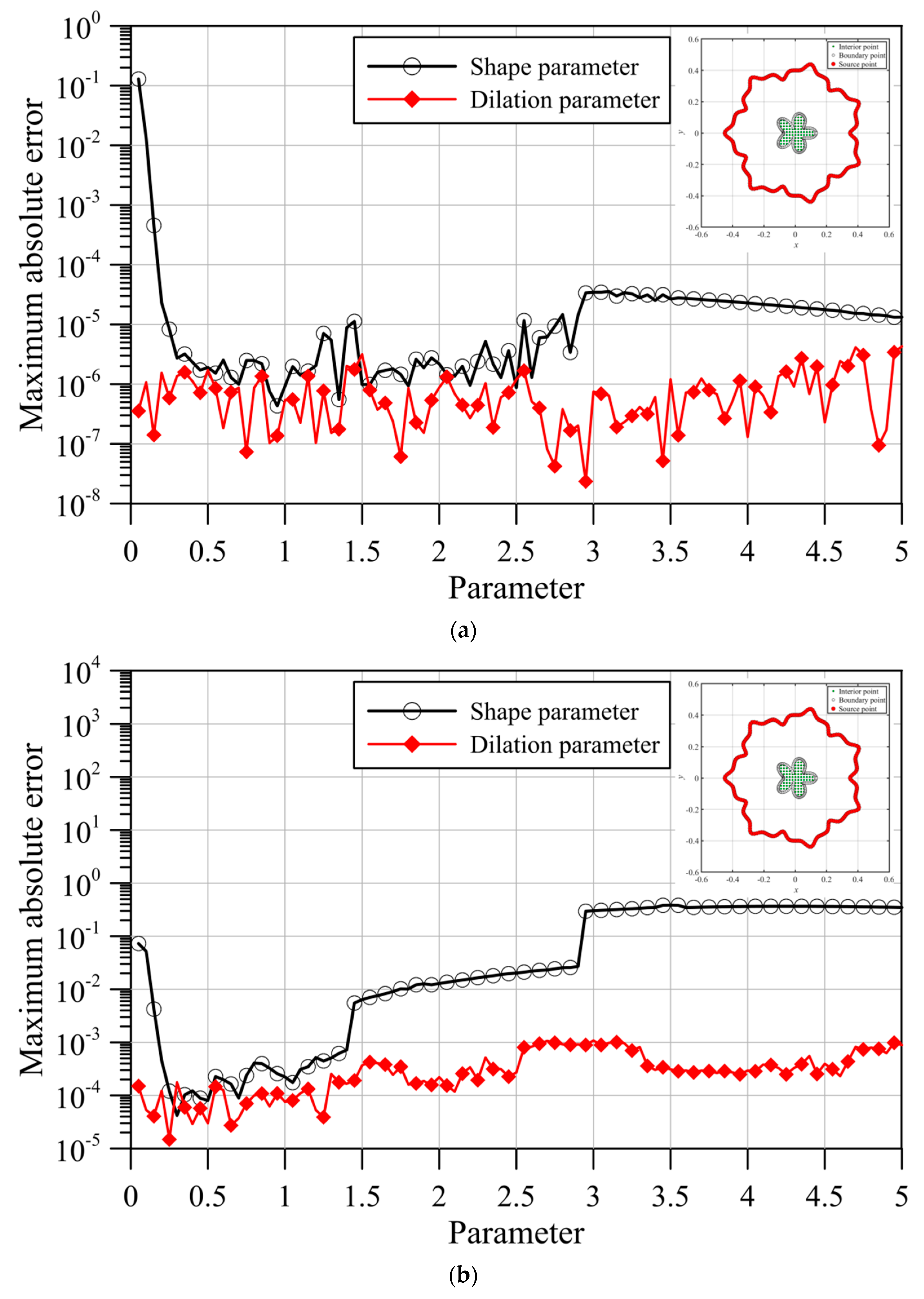 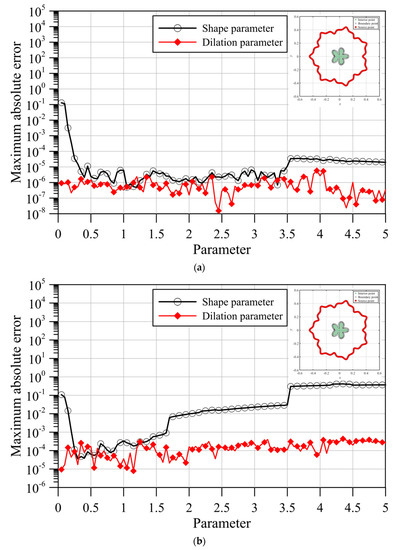 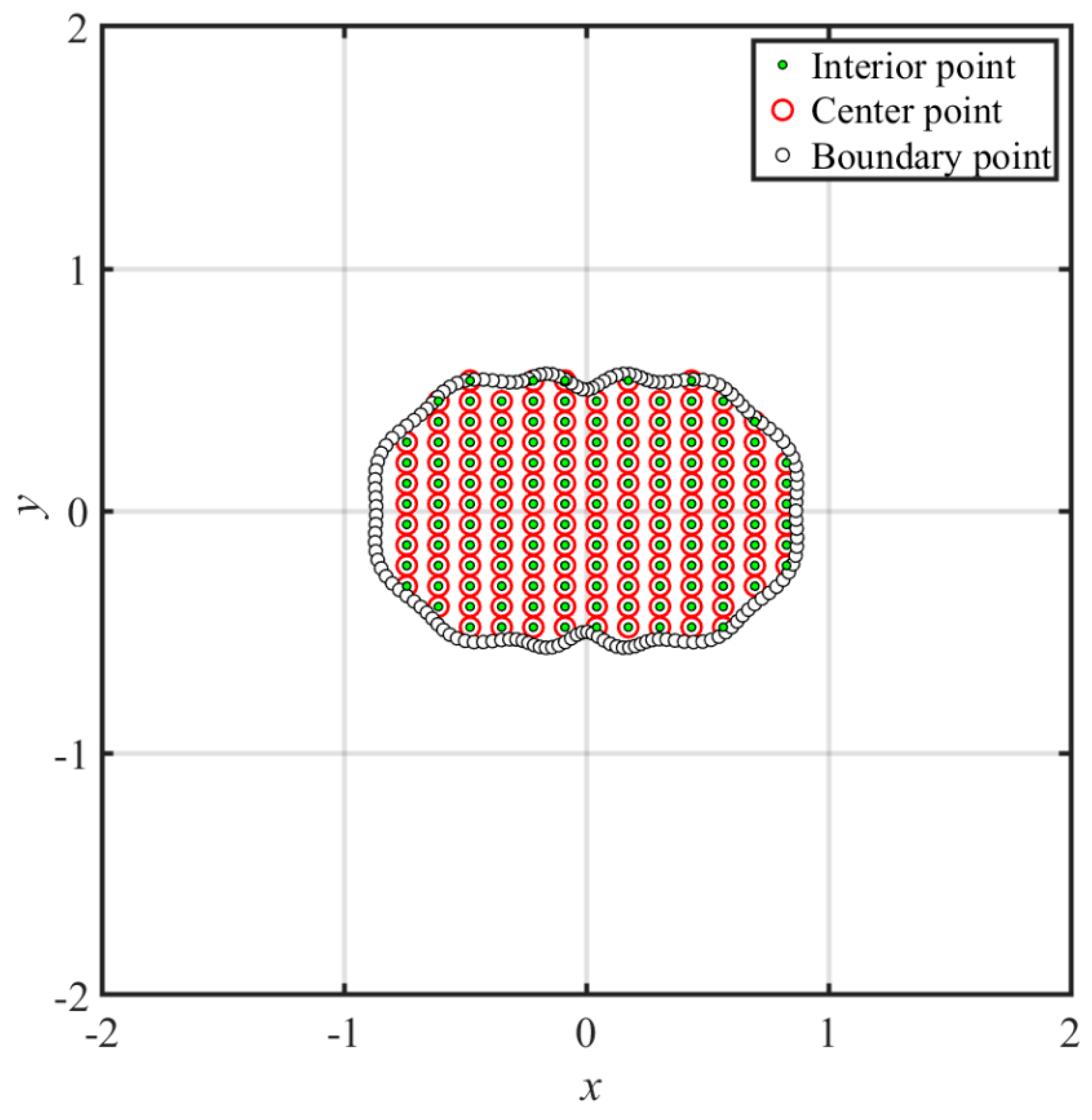 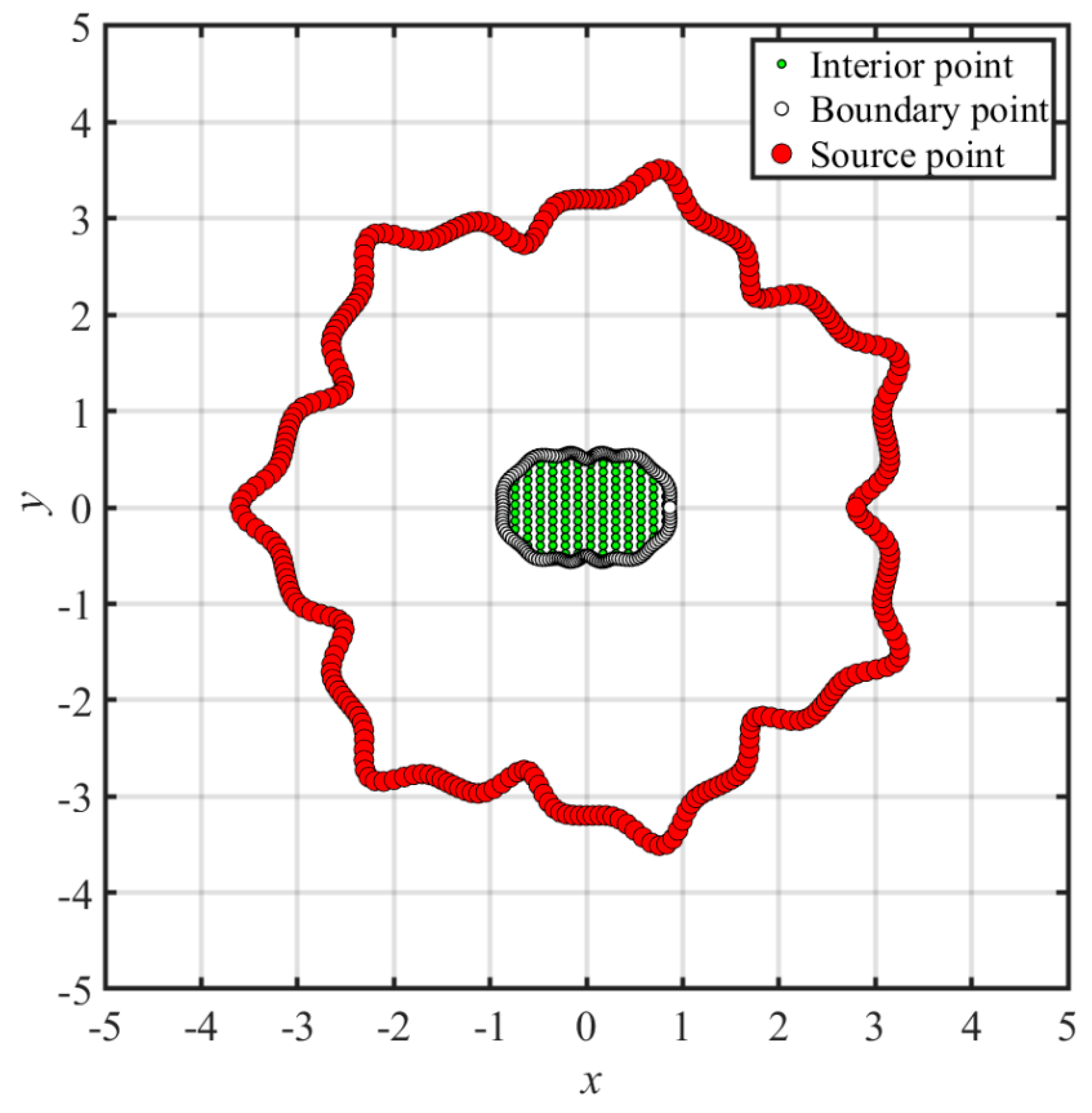 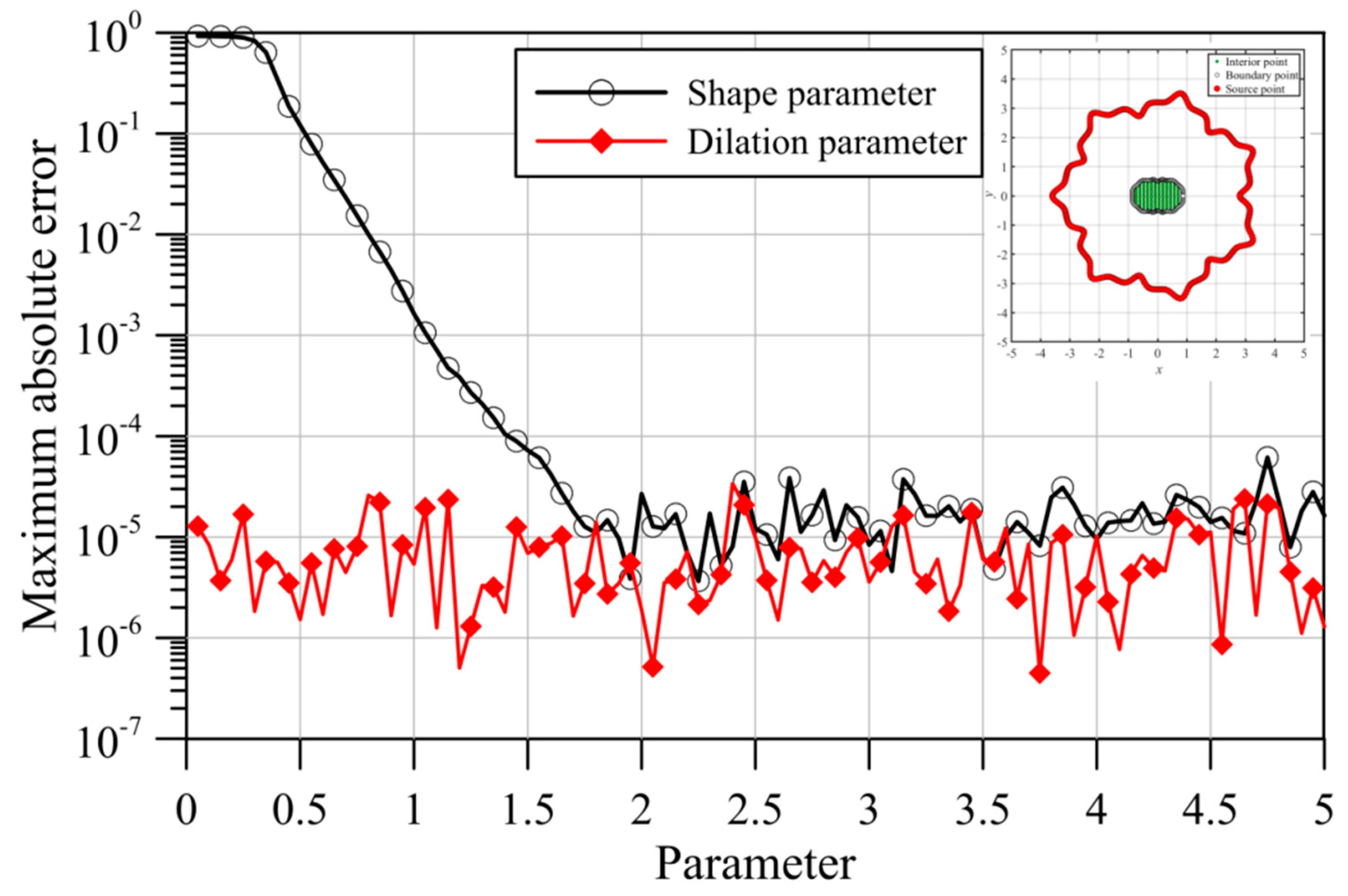 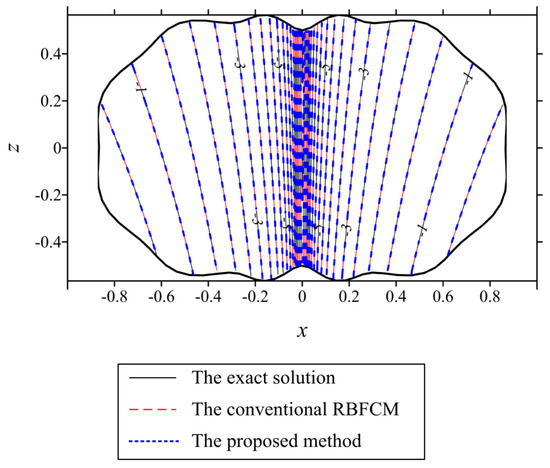