There are More than Two Sides to Antisocial Behavior: The Inextricable Link between Hemispheric Specialization and Environment

Seventy-five participants (39 females, 36 males; M age = 21.2, SE = 0.30) took part in the study and received 5–10€ upon completion of two experimental sessions. All participants were right-handed and had normal or corrected to normal vision. Half of the participants (38: 18 males and 20 females, M = 20.02, SE = 0.29) were randomly assigned to receiving anodal stimulation over the lDLPFC, the other half (37: 18 males and 19 females, M = 22.04, SE = 0.46) were randomly assigned to the group receiving anodal tDCS over the rPPC. Four participants (two for each group) did not complete the two sessions due to adverse effects reported during stimulation.
The sample size was a priori calculated using More Power software [66] based on the effect size for the 2-way interaction taken from a behavioural study with two groups [67] for the word-task condition: ηp2 = 0.129; α = 0.05; β − 1 = 0.95. This established that with a ηp2 = 0.129, α = 0.05, power = 0.98, 34 participants are necessary to detect a moderate-large effect.
All participants gave their written informed consent, which was obtained according to the Declaration of Helsinki (1991). The study followed institutional guidelines and had received approval by the institutional Ethics Committee (#PSI-21-05-2012). Participants completed a health safety questionnaire for tDCS studies to assess whether they qualified to receive stimulation. Exclusion criteria were having suffered an—or having a first-degree relative suffering from—epileptic seizure, having suffered or being diagnosed with neurological or psychiatric disorders, having suffered head injuries or trauma, having metallic head implants or metal fragments, using psychoactive medications, being pregnant, having a sensitive skin. All participants reported no history of neurological or psychiatric disorders and no ongoing use of medication. All participants were native Italian speakers and naïve to the aims of the study.

Distractor-Faces: Full-colour photographs (13.23 × 16.53 cm) of 48 middle-age faces (24 males and 24 females), were selected from the FACES database [68]. Sixteen angry faces (eight males, eight females), 16 happy faces (8 males, 8 females) and 16 neutral faces (8 males, 8 females) served as distractors. Happy and angry expressions were used as positive and negative emotions associated with approach motivation [34]. Neutral faces were edited in scrambled images of 50 pixels using MATLAB and were used as the control condition. Twelve different faces were selected for the practice trials (see Appendix A for the complete list of stimuli). All pictures were edited, adjusted to the centre and balanced for brightness (average value: 106.5) using Adobe Photoshop 6.0 so that each picture measured 14.8 × 12.4 cm when displayed on screen.
Target-Words: Targets were 48 words (24 positive, 24 negative) selected from the Italian translation and validation [69] of the Affective Norms for English Words [70] (ANEW). Twelve different words (six positive, six negative) were used as targets in the practice session (see Appendix A for the complete list of stimuli). For the experimental set, positive and negative words differed for valence (positive: M = 7.53; SE = 0.58; negative: M = 2.78; SE = 0.74, t (46) = 24.80, p < 0.001), but did not for arousal (positive: M = 5.44; SE = 0.81; negative: M = 5.60; SE = 1.02, t (46) = 0.6, p = 0.55), and word length (positive: M = 7.08; SE = 1.06; negative: M = 7.00; SE = 0.88, t (46) = 0.3 p = 0.77).
The selected words were controlled for semantic associations using association norms for Italian words [71]. When a word was missing from the Italian association norms, the English translation was used, and associations controlled through the University of South Florida Free Association Norms [72]. Target-words were presented in uppercase, lime green, bold, 45-point Arial font (pre-tested to guarantee high visibility when presented on full colour face-pictures). The words were placed at the height of the nose of the distractor’s face. Task instructions were presented on screen and after 12 practice trials, participants completed a total of 288 trials, divided into 6 blocks of 48 trials each, resulting in 8 trials per block for each factorial combination of distractor type ad target-word.

A double-blind, randomized crossover within-subjects design was used; each participant received both active and sham stimulation either of the lDLPFC or of the rPPC on two separated days with an interval of at least 1 week between sessions. The time-interval between the two tDCS sessions (sham and active) did not differ between the two groups (anodal lDLPFC: M = 8.00, SE = 0.35, range 10; anodal rPPC: M = 8.14, SE = 0.32, range 6), t (73) = 0.339, p = 0.74. The order of stimulation (active and sham) was counterbalanced over all participants in each group.
Following scalp measurements, participants were randomly assigned to one of the two groups differing on the stimulation electrodes placement (see Figure 1a).
For the lDLPFC group, the anode was placed over F3 and the cathode over the P4 according to 10–20 EEG International System. For the rPPC (P4) the reverse montage was used (i.e., anodal tDCS over the rPPC/cathodal over the lDLPFC). For the active stimulation, a 1.0 mA direct current (impedance was kept below 5 kΩ) was delivered by a battery-driven constant current stimulator (BrainStim E.M.S., srl Bologna, Italy) for 20 min during the word–face interference task, with a 30-s fade in/fade out ramp. For the sham stimulation, the same stimulation parameters were applied but the stimulation duration was only 2 s. The anode-electrode had a diameter of 3.5 cm (density 0.10 mA/cm2), and the cathode-electrode measured 4.7 × 4.7 cm2 (density 0.045 mA/cm2). The cathode (receiver) electrode was bigger in order to maximize anodal effects over the potential cathodal effects [73]. In line with the recommendations provided by Nitsche et al. [74], using a small electrode placed over the lDLPFC (F3 position) and a comparatively larger electrode positioned over the reference electrode allows to maximize stimulation focality. As a result, the current flow is most pronounced in the lDLPFC, the region of interest according to the literature review and study predictions.
The 1.0 mA current intensity was chosen as recent evidence suggests that at least for stimulation of the motor cortex (M1), 1 mA of unilateral anodal tDCS increases cortical excitation, which does not hold for bilateral stimulation and for the 2 mA intensity conditions used in cognitive enhancement experiments [75].
The selected stimulation protocol was online, covering the whole duration of the task, including practice trials as it takes about 2–3 min for the tDCS to affect the stimulated area [76], so overall active stimulation lasted 20 min. Although there is a debate in the literature regarding online vs. offline stimulation application, studies that compared directly the two options show that online protocols are more effective [77,78], particularly for attention tasks [79].

After obtaining informed written consent, participants completed a health questionnaire. An experimenter, blind to stimulation condition, started the electrodes montage and interacted with the participants. Once the electrodes were in place, participants sat in front of a computer in a dimly lit room. A second experimenter, not blind to stimulation condition, connected the electrodes and checked the impedance. All participants were told they were receiving active stimulation.
Task instructions were presented on screen and after 12 practice trials, participants completed a total of 288 trials divided in 6 blocks of 48 trials each, resulting in 8 trials per block for each factorial combination of distractor type ad target-word. The stimulation started just before participants read the task instructions presented on screen and continued throughout the task. To maintain the duration of the task and that of the stimulation within the same range, between blocks there was a fixed 15 s break. All participants completed the word–face interference task within the duration of the stimulation.
Each trial had the following sequence: After a central fixation point (250 ms), a word, presented on top of a face, appeared and remained on screen until response or a maximum of 2000 ms. A response feedback (“Correct”, “Wrong” or “No response”) followed for 500 ms. The inter-trial interval (ITI) ranged from 500 to 1500 ms (see Figure 1b).
Participants were instructed to respond based on whether the word denoted something positive or negative while ignoring the distractor-faces. The instructions emphasized both speed and accuracy. Participants responded by pressing the keys “1” or “2”, which were appropriately labelled as “Positive” and “Negative”, using their index and middle finger of the right hand. Responses were made on a USB keyboard with timing error less than 1 ms and keys assignment to “Positive” and “Negative” was counterbalanced between participants.
Each block consisted of equally probable, factorial combination of Valence (positive, negative target-words) and Condition (congruent, control, incongruent) so that target and distractor could be congruent (i.e., positive word/happy face or negative word/angry face), incongruent (i.e., positive word/angry face or negative word/happy face) or control (i.e., positive or negative word/scrambled face). In each block, targets and distractors were presented only once, and the distractor-faces were always of different identities. Stimuli were presented on a 19-inch LCD monitor (resolution 1920 × 1080, refresh rate 60 Hz), subtending 13° of visual angle when presented at 60 cm of distance. Stimulus presentation and data collection were controlled using E-Prime Version 2.0 Professional software (Psychology Software Tools, Pittsburgh, PA, USA, 2012) for Windows 7 Professional, which also records participants’ responses. Responses were entered using a standard USB-keyboard with timing error less than 1 ms.
At the end of each session participants responded to two brief printed questions assessing being at ease and being tired (scale from 1 to 9, with 1 indicating not at all and 9 indicating very much) during the session. Upon completion of the second session, participants were told that in one of the two sessions they did only receive sham stimulation and were asked whether they could tell which stimulation they had received in which session. In all cases, participants were not able to report with certainty the session with active from that with sham stimulation. All participants were fully debriefed.

The experimental design is a 2 (Group: lDLPFC vs. rPPC) by 2 Session (sham, active) by 2 (Valence: negative and positive target-words) by 3 (Condition: congruent, control, incongruent) mixed factorial design with the first factor between-subjects.

Trials on which an error was made (3.4%) and with RTs faster than 120 ms or 2.5 SD above the overall mean were excluded from analyses (5.6%). For each condition, mean RTs and accuracy, as the proportion of correct responses, were computed. For RTs, interference was computed as {[(RTs Incongruent − RTs Control)/[(RTs Incongruent + RTs Control)]/2} * 100 whereas Facilitation was computed as {[(RTs Congruent − RTs Control)/[(RTs Congruent + RTs Control)]/2} * 100 (see [80]). Interference is indicated by positive scores whereas facilitation by negative scores.
As response accuracy was very high, data were not analysed further. Interference and Facilitation scores were analysed with a 2 (Group: lDLPFC vs. rPPC) by 2 Session Order (sham first, active first) by 2 Stimulation (tDCS: sham vs. active) by 2 (Valence: negative vs. positive) mixed factorial ANOVA with the first two factors between-subjects. 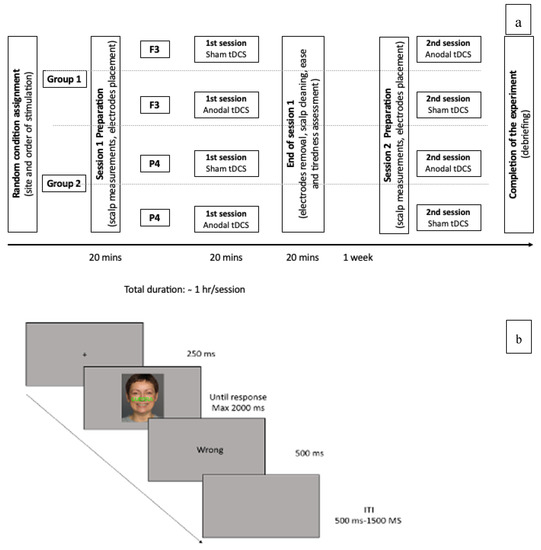 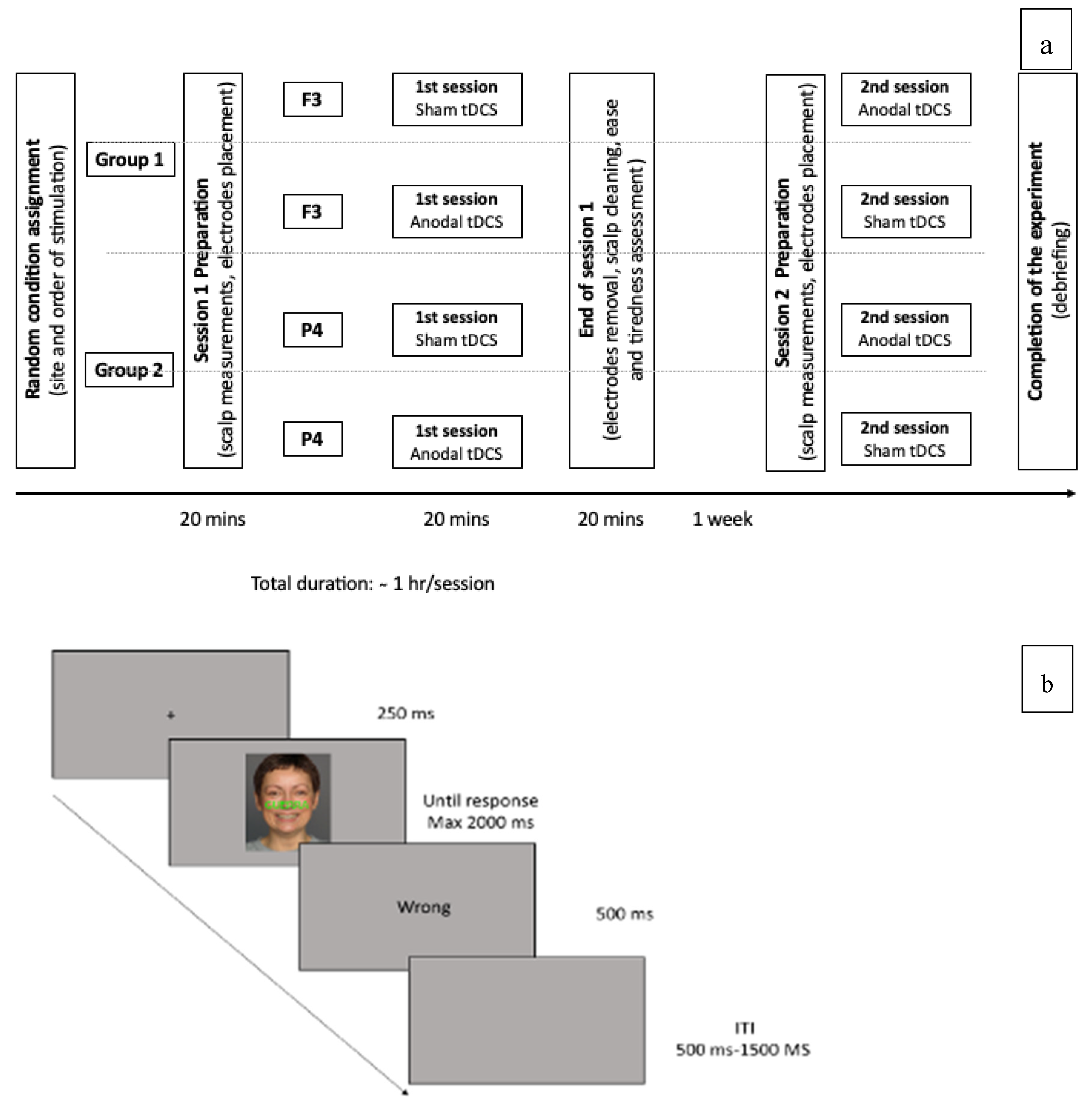