Generation of Julia and Madelbrot Sets via Fixed Points

Multiple laser beams and single-mode optical fibers output can be approximated by assuming that the emitted light has a symmetrical Gaussian intensity profile, which corresponds to the transverse electromagnetic mode (TEM00), which is designated as a Gaussian beam. Current free-accessible design tools are limited to the spatial analysis of the beams, in general, and to the intensity, in particular, and to the graphical visualization in 2D with very limited options. In this work, a novel a computer-aided laser-fiber output beam TEM00 designer, CATEM00, is presented based on the 3D representations typically provided by camera beam profilers, and on the fundamentals of the wave theory of light, including diverse flexibility capabilities for graphical manipulation and parameter comprehension both in terms of spatial behavior and in angular confinement. It must be highlighted that not only is the spatial limitation design of light impact relevant in TEM00 applications but, also, the angle with which the light reaches the target. Hence, the availability of capabilities of phase design in TEM00 following the paraxial limitations is highly convenient. Results and discussion in terms of intensity, power, divergence and wave fronts are presented considering a set of study cases, showing its coherence with Gaussian beam theory. View Full-Text
Keywords: computer-aided design; symmetric and directional beam light; optical fiber; software tool; simulation computer-aided design; symmetric and directional beam light; optical fiber; software tool; simulation
►▼ Show Figures 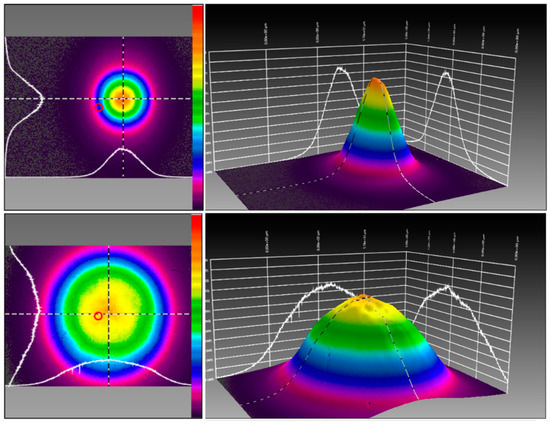