Article
Role of Geometric Shape in Chiral Optics
by

:
The distinction of chiral and mirror symmetric objects is straightforward from a geometrical point of view. Since the biological as well as the optical activity of molecules strongly depend on their handedness, chirality has recently attracted high interest in the field of nano-optics. Various aspects of associated phenomena including the influences of internal and external degrees of freedom on the optical response have been discussed. Here, we propose a constructive method to evaluate the possibility of observing any chiral response from an optical scatterer. Based on solely the T-matrix of one enantiomer, planes of minimal chiral response are located and compared to geometric mirror planes. This provides insights into the relation of geometric and optical properties and enables identifying the potential of chiral scatterers for nano-optical experiments.
Keywords:
optical chirality; mirror symmetry; helicity; optical scatterer

It is usually a simple task to tell by eye whether an object is chiral or not: Achiral objects are superimposable onto their mirror image and, accordingly, they possess a mirror plane [1]. Recently, chiral scatterers have gained significant interest in nano-optics due to their potential to enhance the weak optical signal of chiral molecules [2,3,4]. Especially, the quantities of optical chirality and optical helicity as well as their relation to duality symmetry are subjects of current research [5]. The most established experimental technique in this field is the analysis of the circular dichroism (CD) spectrum which equals the differential energy extinction due to the illumination by right- and left-handed circularly polarized light [6].
In order to observe such chiral electromagnetic response, it seems to be obvious that geometrically chiral scatterers are required. However, it has been shown that extrinsic chirality, that is, a chiral configuration of the illumination and geometric parameters, yields comparable effects as intrinsically chiral objects [7]. By tuning the far-field polarization of the illumination, large chiral near-fields may even be generated in the viscinity of achiral objects [8]. In CD measurements, randomly orientied molecules are investigated, which can be classified by their T-matrix [9]. The latter has been used for quantifying the electromagnetic (e.m.) chirality, based on a novel definition of it [10].
However, the quantification of the geometric chirality is an elusive task [11] and even the unambiguous association of the terms right- and left-handed enantiomer of a general object is impossible [12]. Different coefficients attempting to rate the chirality of an object are based on the maximal overlap of two mirror images [13] as well as the Hausdorff distance [14]. The choice of a specific coefficient determines the most chiral object [15], that is, there is no natural choice for quantifying geometric chirality. This also holds for the various figures of merit estimating the e.m. chirality. Similar correlations between geometric and optical properties are investigated with respect to the non-sphericity of arbitrary scatterers [16].
In this study, we start by transferring the simple procedure of finding a mirror plane to optics. Such symmetries are present in different mathematical descriptions as for example, block structures in the Mueller scattering matrix [17]. Here, we analyse the T-matrix and its associated geometric mirror symmetries by employing translation and rotation theorems of vector spherial harmonics. We illustrate this concept with numerical simulations of an experimentally realized gold helix. Different quantifications of the e.m. chirality are compared. Furthermore, the symmetry planes found in the optical response by our method are correlated to those of geometric origin. It is shown that the complex optical response, including higher order multipoles, yields mirror planes in the T-matrix which are not directly related to geometric symmetries.
In the following, we would like to briefly introduce the theory behind the methods described in this study. Further information may be found in Supplementary Materials.
The most general description of an isolated optical scatterer is the well-known T-matrix [18]. It relates an arbitrary incident field with the scattered field caused by the scattering object. The optical response to any incident field is included in the T-matrix. Accordingly, the following analysis of T is independent of specific illumination parameters such as the direction, polarization and beam shape. The goal of this study is to obtain insights into illumination-independent symmetries of the scatterer.
Usually, both the incident as well as the scattered field are given in the basis of vector spherical harmonics for computations with the T-matrix [19] (see Supplementary Materials). Physically observable quantities such as the scattered energy, the absorption, as well as the flux of optical chirality are readily computed from T [9]. In numerical simulations, T may be computed with high accuracy [20]. Knowing the response of the left-handed object enables the analytic computation of the response of its mirror image : where we choose mirroring in the -plane without loss of generality (see Supplementary Materials for further details on notation). Note that the terminology of right- and left-handed is ambiguous, as pointed out before, and may be interchanged.
Since we aim to investigate arbitrary mirror planes, we note that an arbitrary plane is given by the three spherical coordinates of its normal: the inclination and the azimuthal angle , as well as the distance d from the origin. We define the according transformation acting on the object as where is the translation of the T-matrix in the direction given by the angles and the distance and and are the rotations around the z- and y-axis, respectively [21] (see Supplementary Materials).
For a geometrically achiral object (see Figure 1a) there exists at least one transformation such that . On the other hand, the lack of a geometric mirror plane of a chiral object Figure 1b implies that there exists no such transformation and that and do not coincide for any set of transformation parameters . Note that this does not generally hold in the long wavelength limit, that is, the incident wavelength being much larger than the dimension of the scatterer, due to chiral dispersion [22].

None of the three optical symmetry planes is directly related to the geometric mirror plane of the helix. However, Figure 3b enables the comparison of geometric and optical symmetries. In order to further analyze the optical response, we show the wavelength-dependent classification of the symmetry planes on top of Figure 4. The three classes correspond to sharply separated wavelength ranges: Class 1 is valid for . For larger wavelengths , the T-matrix possesses the symmetry according to planes of class 2. Finally, in the long wavelength regime (), the symmetry is in class 3.
The analysis in Figure 3b suggests that class 3 (green) is the closest one to the geometric mirror plane. This is further strengthened by the full angular spectrum of the optical chirality coefficient (see Supplementary Materials). Accordingly, we find that the optical response is dominated by the geometric shape for long wavelengths. Obviously, the optics is dominated by the electric dipole moment in this regime which is also shown in Figure 4. Here, the mean of the diagonal entries of submatrices of the T-matrix are shown. These are proportional to the electric and magnetic dipole moments as well as to the electric quadrupole moments.
The three symmetry classes of the T-matrix occur close to three electric dipole peaks ( = 623, 833, and 1473 nm) and are influenced by the anisotropy of the T-matrix. Truly chiral behaviour, as observed here, however, originates not from anisotropy but from coupling between electric and magnetic multipoles [26]. In Supplementary Materials, we elaborate on the complex interplay between these different contributions in the dipolar limit. Here, we limit the discussion to the main aspects of different multipolar contributions.
For large wavelengths with symmetry of class 3, the electric dipoles are much larger then any other induced multipole. In the intermediated regime of symmetry class 2, the magnetic dipole moment significantly increases. For short wavelengths with planes of class 1, the electric quadrupole moment is stronger than the magnetic dipole moment which yields the change in the optical symmetry. Higher order multipoles including mixed electric-magnetic moments are depicted in Supplementary Materials, in which it is shown that the dominant dipolar moments contribute additionally to the variation of mirror planes. This elaborated study of multipolar resonances underlines again that the chiral response deviates from expectations due to a purely geometrical analysis of the scatterer.

In summary, we have introduced a method to obtain geometric mirror planes from the optical T-matrix of a scattering object. Accordingly, the optical effects of geometric structures such as metamaterials are analyzed [27]. We applied the procedure to an isolated gold helix and found correlations between the symmetry of its geometric shape and those of the optical response in the long wavelength regime. On the one hand, this confirms the expectation that instrinsic geometric chirality is directly related to an optically chiral response. On the other hand, for shorter wavelengths where higher multipoles are induced, mirror planes derived from the T-matrix do not coincide with the geometric mirror plane. This implies light-matter interactions whose symmetry cannot be explained simply by geometric chirality. Our method can be applied to all isolated scattering objects being chiral as the helix or achiral (see Supplementary Materials). It constructively identifies geometric planes of mirror symmetry in their optical response. This approach provides the basis for a detailed analysis of correlations between structural and spectral properties of nano-optical scatterers.

The following are available online at https://www.mdpi.com/2073-8994/12/1/158/s1 and contain detailed information on T-matrix formalism, electromagnetic and geometric chirality coefficients, multipolar analysis, geometric model and optimization as well as the analysis of an achiral scatterer with our method.

We thank Martin Hammerschmidt for in-depth discussions on several topics. 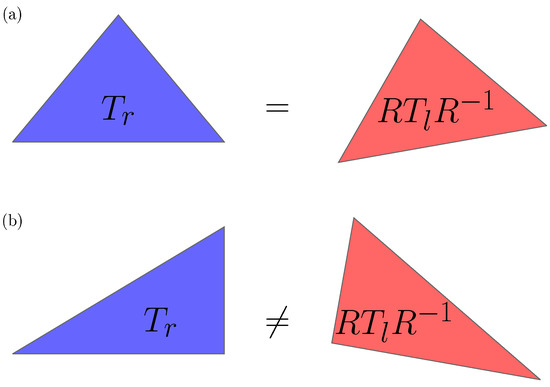 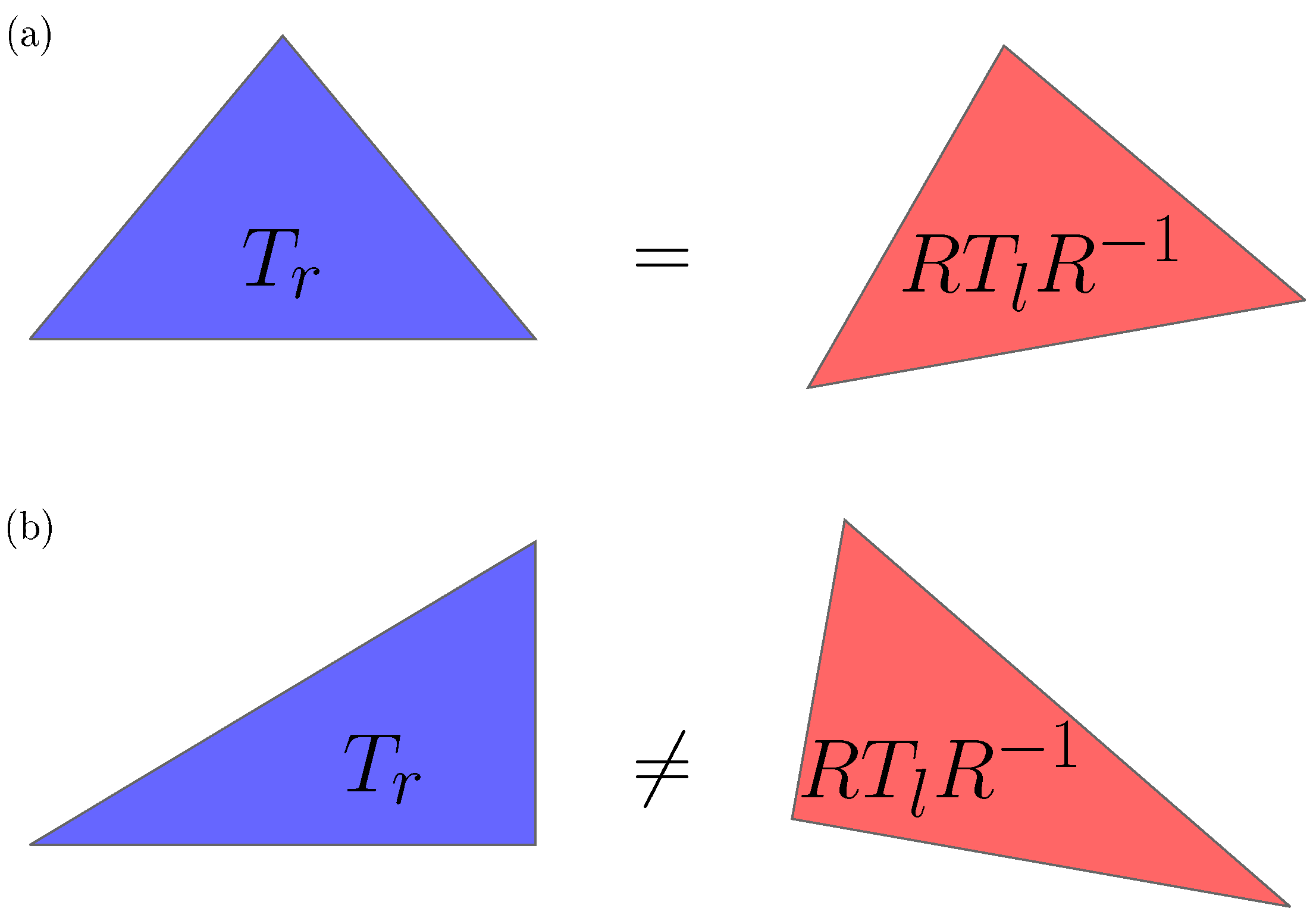 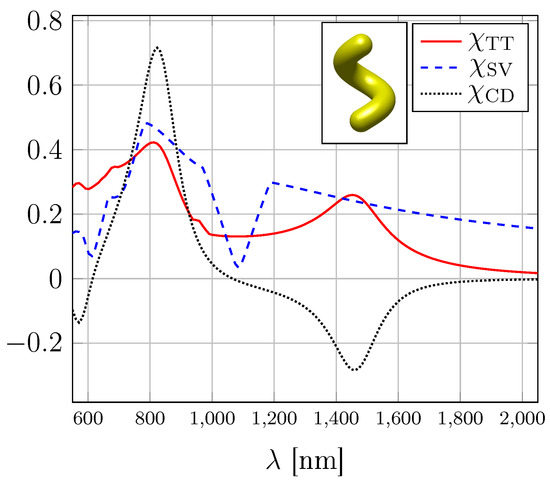 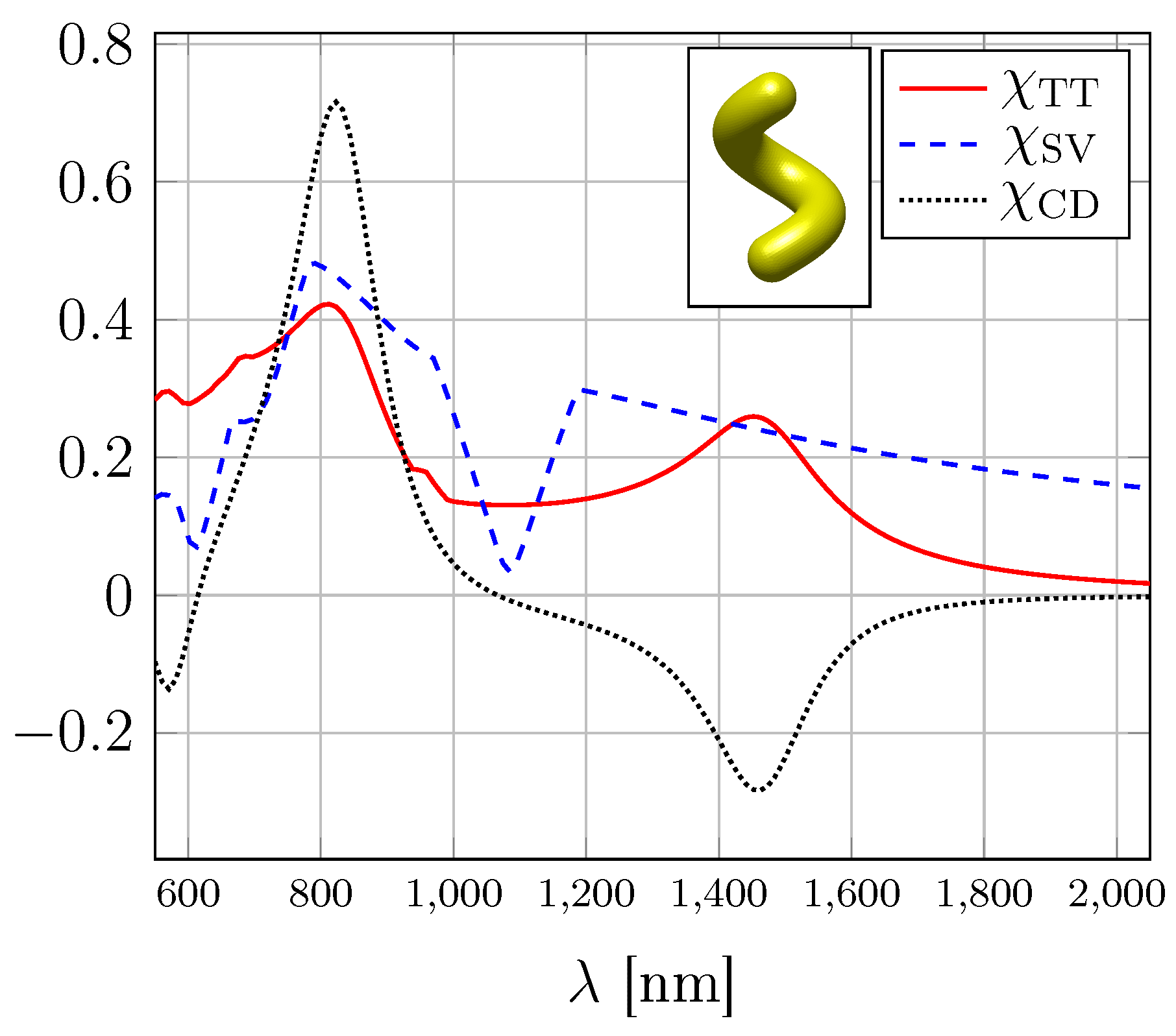 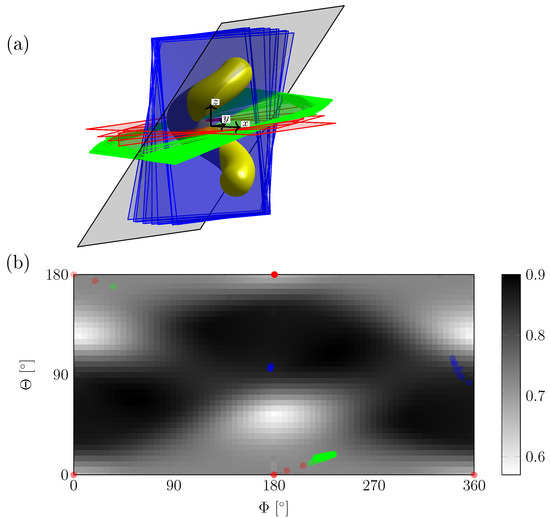 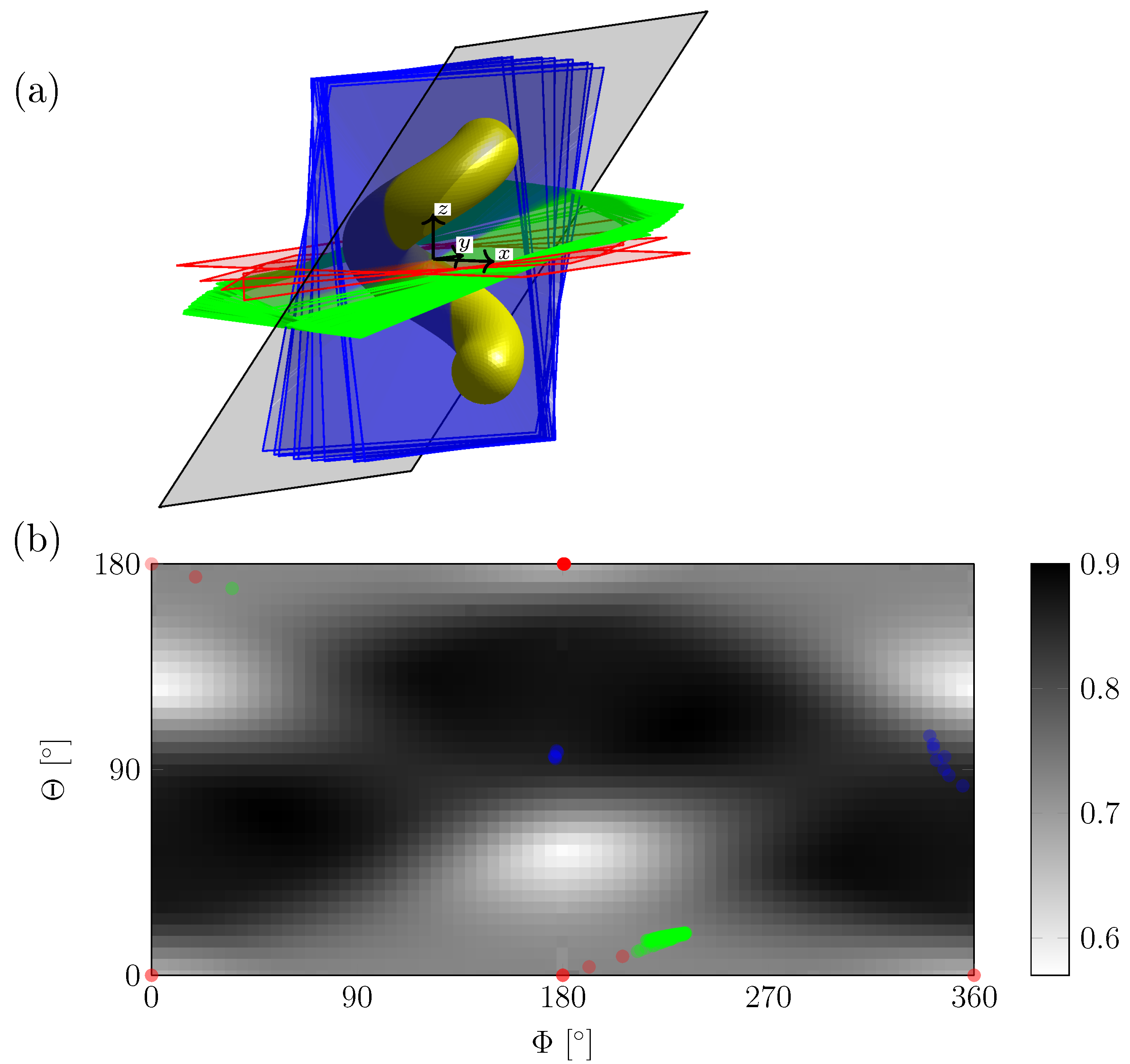 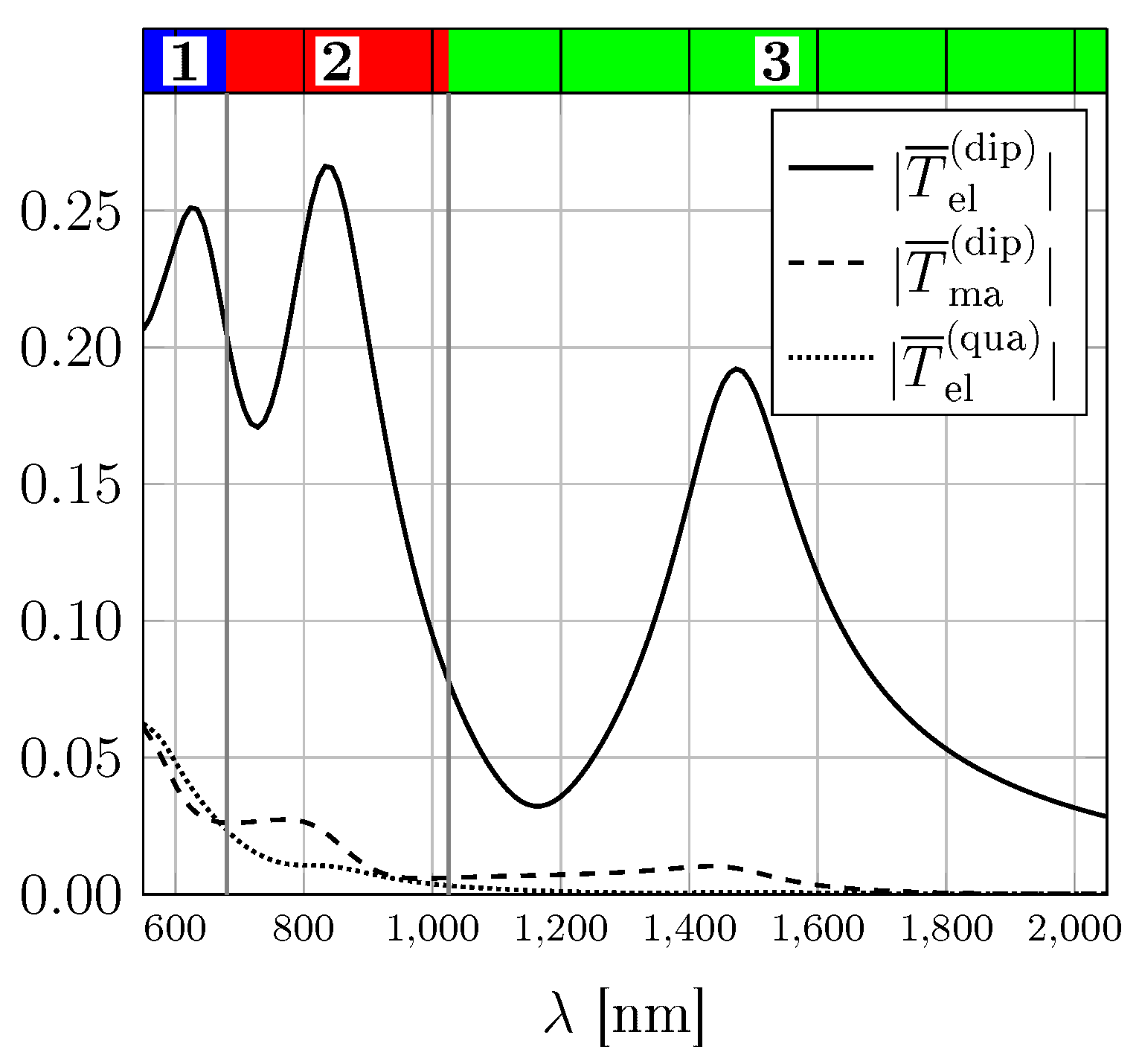