This paper is concerned with the efficient stochastic simulation of multiple scenarios of an infectious disease as it propagates through a population. In particular, we propose a simple “green” method to speed up the simulation of disease transmission as we vary the probability of infection of the disease from scenario to scenario. After running a baseline scenario, we incrementally increase the probability of infection, and use the common random numbers variance reduction technique to avoid re-simulating certain events in the new scenario that would not otherwise have changed from the previous scenario. A set of Monte Carlo experiments illustrates the effectiveness of the procedure. We also propose various extensions of the method, including its use to estimate the sensitivity of propagation characteristics in response to small changes in the infection probability.
Keywords: stochastic simulation; infectious disease; SIR model; variance reduction stochastic simulation; infectious disease; SIR model; variance reduction

With the mechanics of the methodology established, we put forth in this section a series of examples to assess the performance of the proposed green method, including its efficiency as compared to traditional (naive) simulation. Examples 1 and 2 in Section 3.1 give exact small-sample results that allow us to succinctly see how various system performance characteristics (e.g., the expected number of individuals infected and the expected length of the pandemic) are affected as the Bernoulli p parameter varies. Although these sorts of results are interesting in and of themselves, they also provide partial validation for the subsequent simulations that we will run. Such exact results might even allow us to avoid simulation altogether—but only for extremely small population sizes. Example 3 in Section 3.2 is concerned with a cohort size ( susceptibles) that is large enough so that we are forced to use simulation to assess system performance as we vary p. This example is useful for indicating what typical histograms might look like for the system performance characteristics of interest. Finally, Section 3.3 presents a number of results that directly address the contibutions of our green simulation technology. Namely, Example 4 uses simulation to establish run-time savings on a larger, more-complicated scenario involving a cohort of size ; and Example 5 illustrates how we can use simulation variance reduction methods to conduct certain sensitivity analyses on the various performance characteristics.

It ought to be clear from Examples 1 and 2 in Section 3.1 that even small-sample exact calculations present combinatorial challenges. Luckily, it is easy to carry out simulations for more-substantive examples involving larger values of the cohort size n. In this section, we consider a simple example involving a non-trivial cohort size so as to illustrate what typical disease characteristic histograms might look like for moderate values of n, in particular, as we vary the infectiousness parameter p.
Example 3.
Suppose that susceptibles are in a facility, and all are exposed to one infective on Day 1; the probability that a susceptible becomes infected upon exposure to an infective is ; and each infective stays infectious for exactly one day. Figure 5, Figure 6 and Figure 7 respectively depict histograms of the length of the pandemic (in days), the total number of individuals who eventually become infected (out of 100), and the number of PRNs used in the simulation. These histograms are based on 1,000,000 independent replications of the simulated pandemic. Figure 8, Figure 9 and Figure 10 depict the same outcome measures as the previous three, except that this latter set of figures is for the case . By design, replication i of the runs used many of the same green PRNs as replication i of the runs, .
Figure 5 shows that, for small , the sample probability mass function (p.m.f.) of the length of the pandemic dies off quickly. It is actually possible for the pandemic to end after only one day—with probability —but the sample mean of the length of the pandemic is with a sample standard deviation of . Figure 6 reveals a similar p.m.f. for the number of individuals who become infected; here and , with the large standard deviation owing to a long right-hand tail. Figure 7 illustrates an interesting p.m.f. for the number B of PRNs (Bernoulli trials) used in the course of the simulations. That p.m.f. is characterized by distinct chunks of PRNs corresponding to the first few days of the pandemic; and we find that and .
Figure 8 shows that, for the much higher , the p.m.f. of D is less variable, owing to the fact that the disease propagates throughout the population quite quickly, so that and . Figure 9 reveals that almost everyone eventually becomes infected, with and . Figure 10 illustrates a much tighter p.m.f. for the number of PRNs used in the case (compared to the case in Figure 7); here, we have and . □

The pandemic simulation effort requires more than simply generating Bernoulli trials. One also has to make decisions, update statistcs, and access saved observations from temporary storage. How do these miscellaneous tasks affect the overall computation time with respect to green simulation? In this section, we present a number of results on the efficacy of our green simulation technology. Namely, Example 4 discusses simulation run-time savings on a more-realistic mixing example that what we have seen so far, and Example 5 illustrates how we can use variance reduction methods to carry out sensitivity analysis.
Example 4.
Clock-Time Savings. Consider a school with 900 students and 100 staff members. The students are divided into 30 classrooms, each with 30 students; and each student remains in his/her assigned classroom all day. Each of the 100 staff members are randomly assigned 10 classrooms to visit during the day (and will visit those same assigned classrooms every day). Thus, each student interacts with the other 29 kids in his/her classroom as well as with the staff members who visit the classroom each day; and each staff member interacts with the other 99 staff members as well as with the 300 students whom the staff member visits in his/her assigned 10 classrooms. On Day 1, all 1000 people in the cohort are susceptibles. Unfortunately, the school principal (person 0) is infectious and visits all 1000 susceptibles on Day 1, any of whom subsequently become infected with probability p. The principal is so sick that he does not return after Day 1. However, anyone who gets infected becomes infectious the next day and remains infectious for a total of three days. We ran 200 replications of both the traditional (naive) and green versions of the simulation for each of the five choices of .
To get an idea of what we are facing, Figure 11, Figure 12 and Figure 13, respectively, depict histograms for the length of the pandemic, number of infections that occur, and the number of PRNs required for the baseline scenario for this example. In any case, the traditional replications required about 118 min of real clock time on a standard Windows-based PC; and the corresponding 1000 green replications required about 103 min—i.e., a savings of about 15% over running the five sets of experiments individually. □
Example 5.
Sensitivity and Variance Reduction. The fact that we incorporate many of the same PRNs between runs of the simulation that use different values for parameter p suggests that the outputs from the runs may be positively correlated. For instance, suppose that denotes the sample mean of the number of individuals infected during the course of the simulation when the baseline Bernoulli parameter is p. If so that and are presumably positively correlated, then is an unbiased estimator for the true mean difference and, notably,so that the estimator for the mean difference has a smaller variance than would be observed if the runs had been undertaken independently—a standard simulation variance reduction technique known as common random numbers (see Law [14]). As a bonus, we immediately obtain an estimator for the derivative in the vicinity of ,Such derivatives are useful for sensitivity analysis, and are especially so if they are of reduced variance.
To illustrate this approach, suppose we simulate each of two scenarios and , both involving individuals, one initial infective, and a one-day infectiousness period. We simulated both of the scenarios with three sets of 100,000 replications to examine the variability of the outcomes under two sampling schemes: The two scenarios are carried out independently (Case A), and the scenarios are carried out in green fashion (Case B). Table 5 shows that the differences produced by the green simulations have less variability than those produced by Case A. □

We have shown how to conduct “green” simulations of the propagation of an infectious disease by reusing certain random variates under different input parameter settings. This reuse avoids some of the computation time that would be dedicated to generating a new set of random variates each time the parameters change. Implementation is straightforward, and computation time savings can be significant. Moreover, the green simulation can be regarded as a variance reduction technique when used for purposes of sensitivity analysis.
In terms of future research, there is still a great deal that we can do:

This research was partially funded by National Science Foundation Grant No. CMMI-1233141. 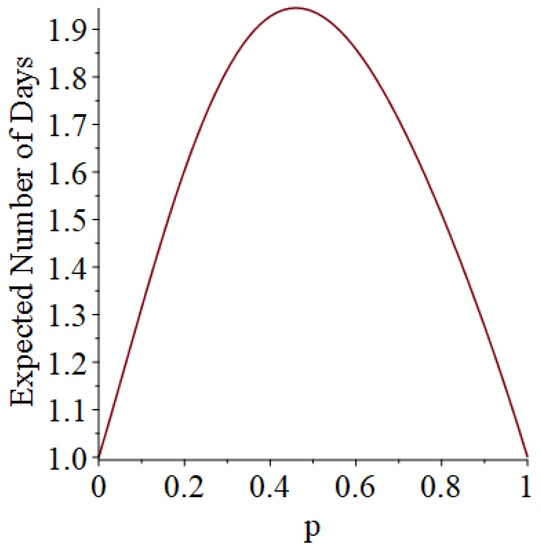 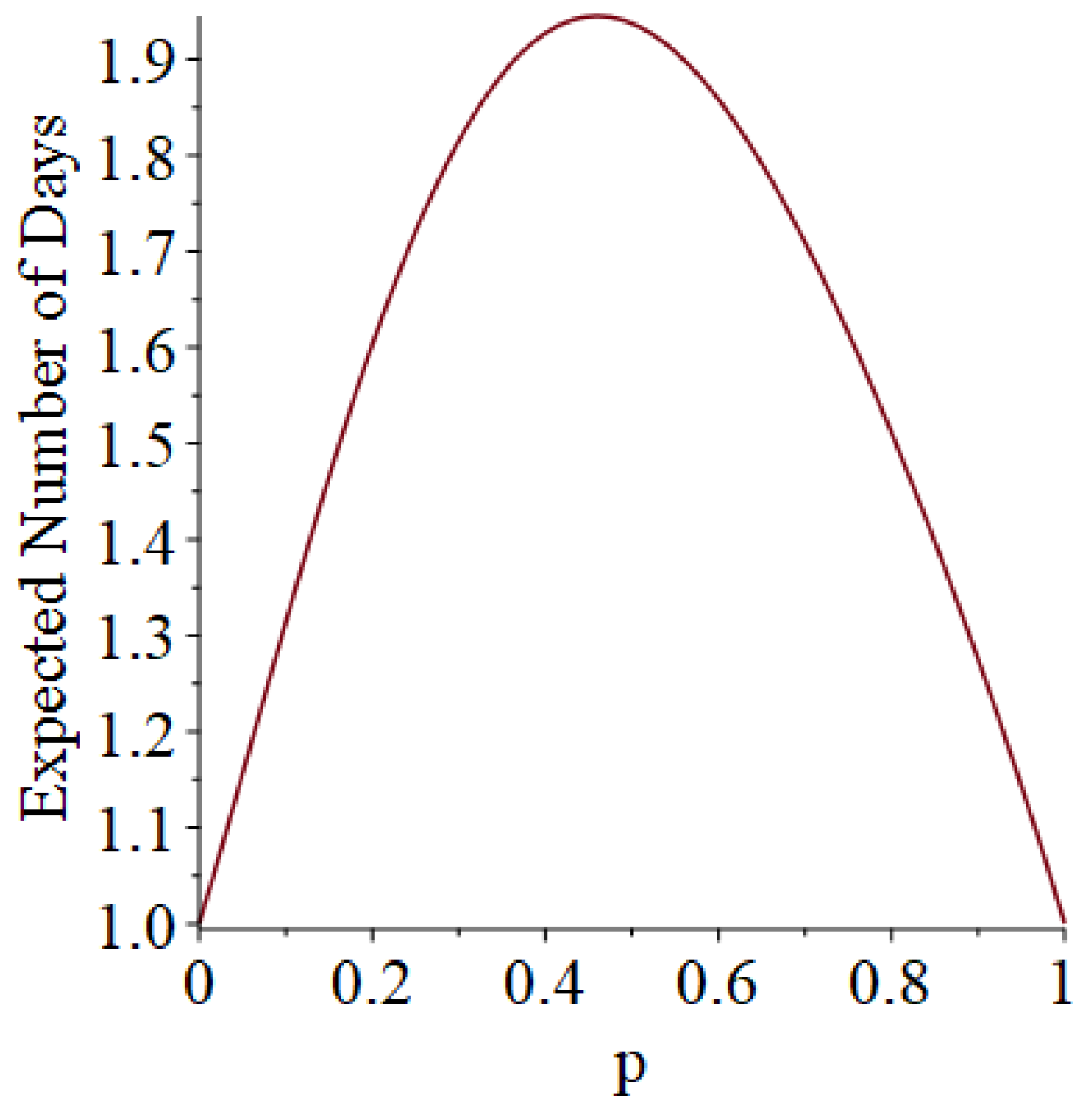 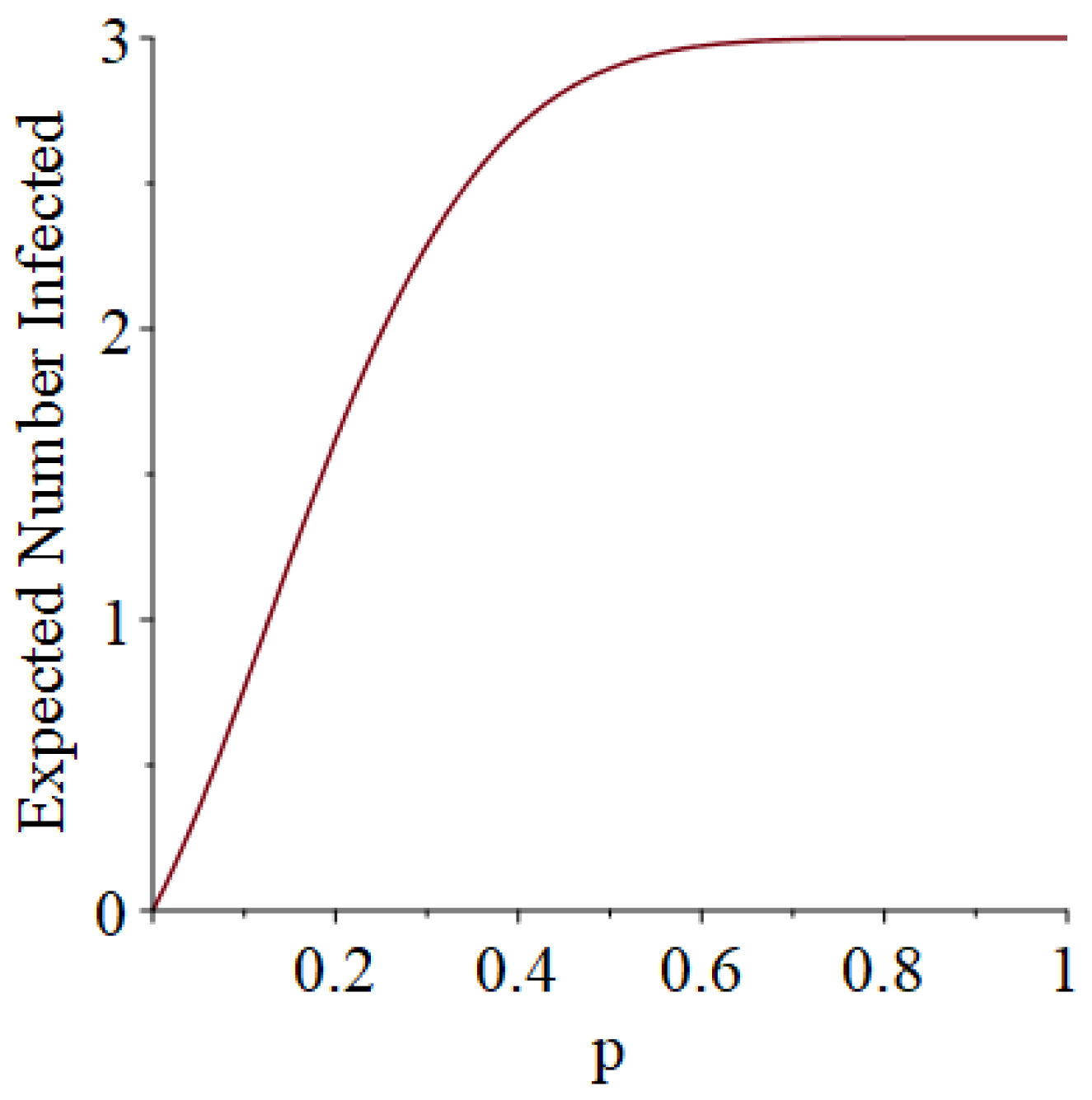 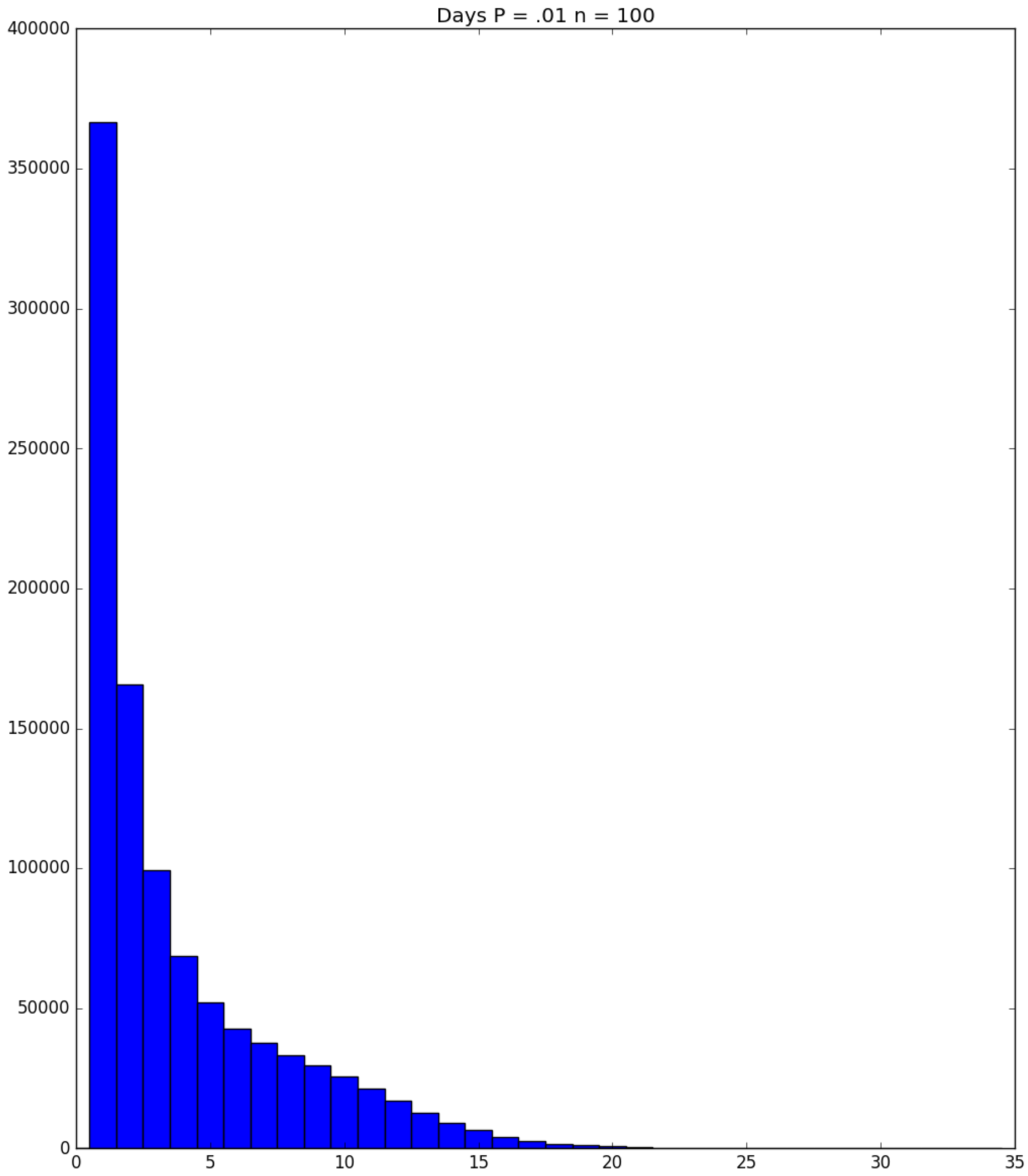 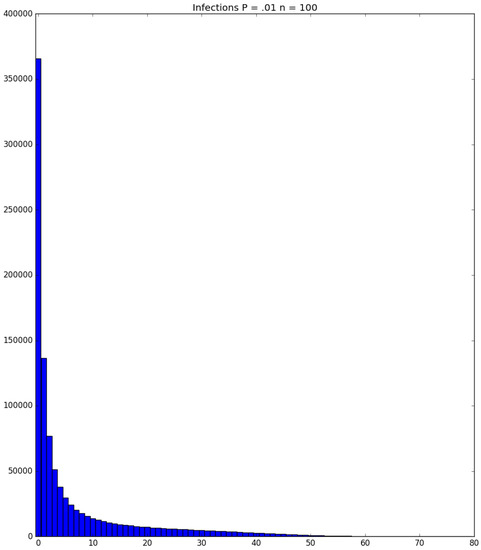 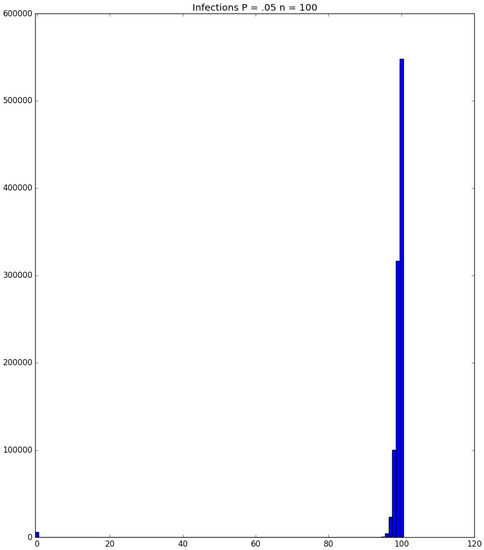 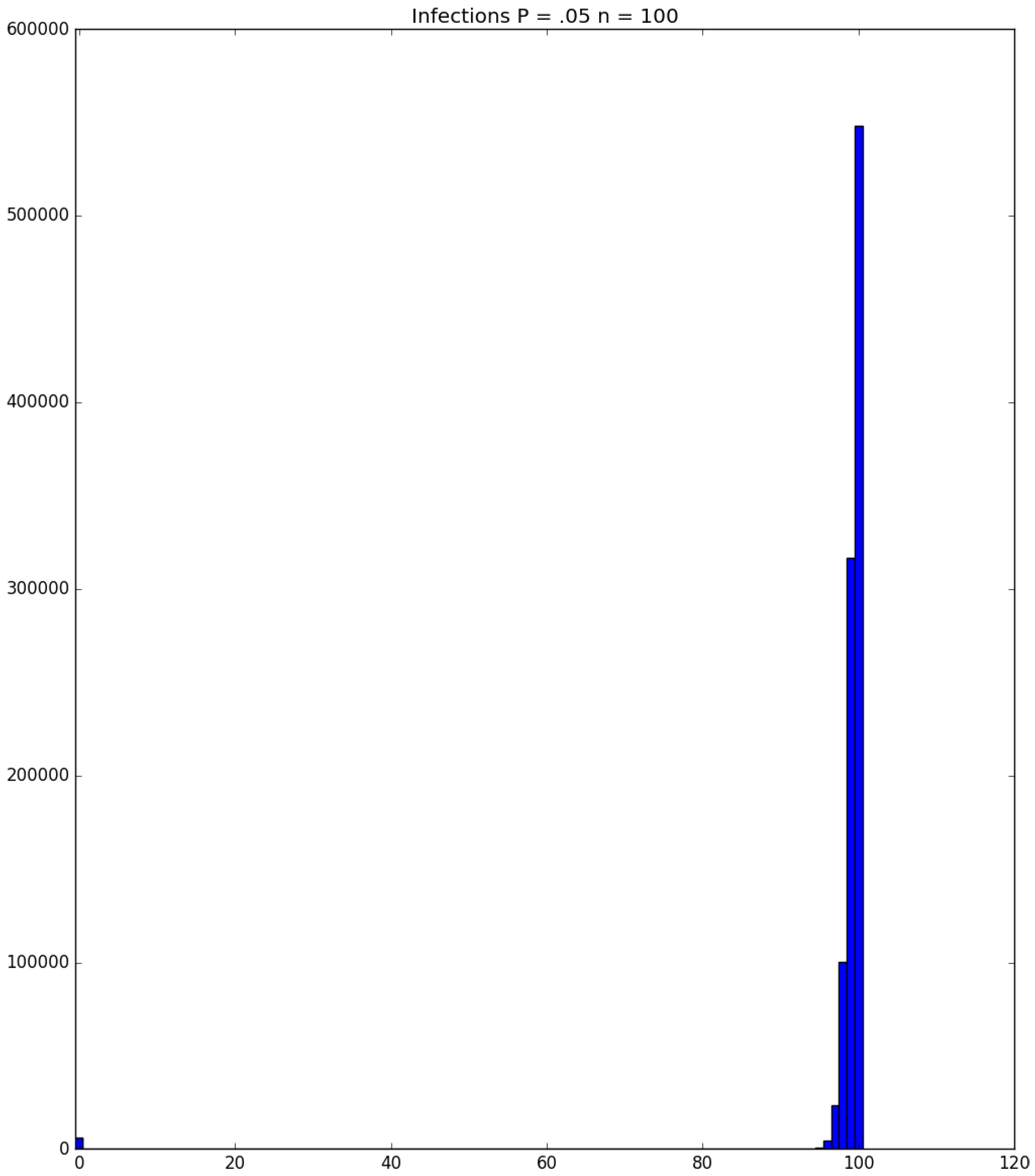 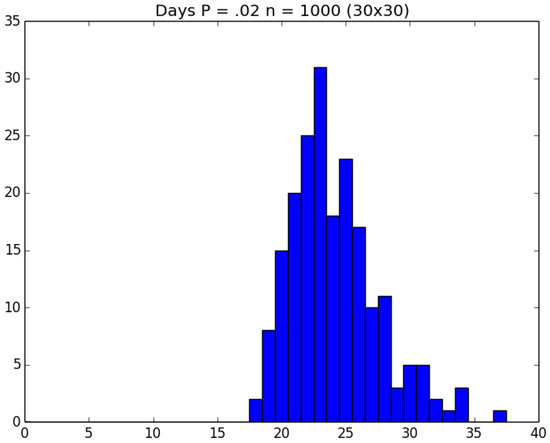