A Mathematical Model for Transport in Poroelastic Materials with Variable Volume:Derivation, Lie Symmetry Analysis, and Examples
Previous Article in Journal

For dimensional equations, the case where is known to be unfeasible, as finding a nonclassical operator is equivalent to solving the original governing equation [44]. Therefore, without loss of generality, we set and proceed to solve the determining equations for and .
The action of the second prolongation of the base vector, , on the differential Equation (1), together with the requirement of invariance (2), gives an expression relating and and their derivatives. After making use of the invariant surface condition (3), we find that this expression may be separated into four determining equations according to the coefficients of powers of . The nonclassical determining equations for Equation (1) are: We have been unable to solve this set of determining equations completely; however, some solutions have been found. From Equation (7), we see that:Substituting this into Equation (6), we obtain a PDE that can be solved to give:After substitution into Equation (5), we find: Since all unknown functions apart from are functions of x and/or t and we wish to find the forms of that satisfy Equation (8), we see that either must be cubic or . These two cases are investigated below.
This outcome is identical to the case when both and are constants; the solutions in this constant case were presented by Arrigo et al. [25], and their application to population dynamics was discussed elsewhere [45,46].

After setting and , Equation (8) can be separated in terms of powers of u, enabling the the functions to be determined in terms of the arbitrary functions and . Substituting these into Equation (4), we obtain two PDEs for and . Setting and constant, we can obtain the result obtained by Arrigo et al. [25]. Setting and leaving arbitrary, we obtain the result presented in [4], while setting and leaving arbitrary, we obtain the results presented in [36,37].
If and are both arbitrary, we are able to find a solution to Equation (4); however, we have not been able to solve it in general. If , i.e., , and the spatially-dependent diffusion and reaction terms are given by:we find a nonclassical generator characterised by the infinitesimals:
This nonclassical symmetry was first found by Louw and Moitsheki [47], where they considered the cases and . The resulting solutions were discussed in the context of population dynamics.

Setting , Equations (4) and (5) become:
In order to find the admissible forms of the arbitrary functions , and , we must consider the cases when and are either zero or nonzero.
Setting both functions to zero, , we see that is a factor of all remaining terms in Equation (10) and does not appear at all in Equation (11),
Since we are not interested in the case when , any set of functions , , that satisfies Equations (10) and (11) and forms a nonclassical symmetry will be valid for any form of the nonlinear reaction term . In this case, may be written in terms of and by solving Equation (12), By substituting this into Equation (13), we find:Since is the only time-dependent function, one possible way of finding solutions is to require that that takes one of three different forms described below.

In this case, is a constant, so that is a function of x only. In this case and using the second form of from (14), a simple relationship between and cannot be found, but instead, we obtain a single ODE that must be satisfied by and ,
This equation is satisfied by the combination:when , while the infinitesimals characterising the corresponding symmetry generator are:
This is a strictly nonclassical symmetry since the classical determining equations are not satisfied unless the invariant surface condition (3) and its differential consequences are invoked. In addition, it is valid for any form of the nonlinear reaction term, .

In this case, we find that is related to via:and subsequently, we find from (15) that must satisfy:
The form of that satisfies this and the corresponding spatially-dependent diffusion are given by:where . The infinitesimals that characterise the symmetry generator are:
This symmetry is a generalised version of the Boltzmann scaling symmetry, and satisfies the classical determining Equation (2); it is not a nonclassical symmetry.

For this form of , we find that is related to via: By substituting this relationship and the form of into the remaining determining Equation (15), we find that must satisfy:
While we have not solved this equation completely, a solution to this equation and the corresponding spatially-dependent diffusion is:while the infinitesimals that characterise the symmetry generator are:
This symmetry satisfies the classical determining Equation (2) and so is not a strictly nonclassical symmetry; however, it is valid for any form of the nonlinear reaction term, .
Each of the three reduction operators described above arises from setting . We have also investigated the cases where either one or both of and are nonzero; however, we have been unable to find a solution to the determining equations in these cases.
The classical and nonclassical symmetries presented in this section are summarised in Table 1.

3. Reduced Equations and Some Example Solutions

In this section, we find the reduced equations for the nonclassical and Lie point symmetries found above, and in some cases, we give some new exact solutions.

The first case, where is cubic and and are given by Equation (9), was examined by Louw and Moitsheki [47]. They found the reduced equations for and and provided analytic solutions in both cases. This class of equations (with cubic) is of relevance in population dynamics and can be used to describe changes in the gene frequency in a diploid sexually-reproducing population [45]. Louw and Moitsheki discussed briefly the relevance of the solutions to these types of problems.

For this combination of spatially-dependent diffusion and reaction coefficient, the symmetry operator found above is a classical point symmetry; however, we still present some example solutions here. When is arbitrary and and are given by Equation (18), Equation (1) may be reduced to: where . After introducing the transformation , this may be simplified to:It is difficult to progress any further without giving a specific form for the nonlinear reaction term, and in fact, there are very few forms of for which analytic solutions may be found. One example that does admit analytic solutions is if is linear. In this case, solutions may be written in terms of Kummer functions, Bessel functions (if ) or Whittaker functions (if ) [48]. In the case when , the diffusion coefficient is constant, and the symmetry generator reduces to:which is equivalent to the classical Boltzmann scaling symmetry.

In this paper, we have investigated a class of nonlinear reaction diffusion equations with arbitrary spatial dependence in both the diffusion coefficient and the coefficient of the reaction term. Although we have not solved the determining equations completely, we have found some new forms of the spatial dependence that admit nonclassical or classical point symmetries. For these forms of spatial dependence, we have found the reduced equation, and for some examples, we have constructed new analytic solutions. In this paper, we have considered traditional nonclassical symmetries, that is we have looked for infinitesimals that depend on the independent and dependent variables only , and not on the derivatives of u. It would be interesting to discover if the forms of and that allow construction of an analytic solution may be expanded by the use of generalised nonclassical symmetries as described in the Introduction. We leave this for future work.
Unfortunately, none of the spatial dependencies that we have found here match the step function dependence of the real-world applications discussed in the Introduction. However, we now discuss the application of one of the solutions found here to a model of potential relevance to population dynamics. Nonlinear reaction diffusion equations of type (1) can be used to describe changes in the frequency of a new recessive gene. The quadratic Fisher-type logistic nonlinearity can be used to describe this situation for an asexually-reproducing population, whereas the cubic Huxley-type nonlinearity is more appropriate for a sexually-reproducing diploid population. In this case, the dependent variable, , might represent the density of one of the genotypes in the population. Figure 1a,b shows the spatial dependence given by (16). For the parameter set chosen, individuals diffuse more readily at the left side of the range, while at the right-hand side of the range, the diffusion coefficient becomes slightly negative, indicating aggregation. The strength of the reaction term also varies throughout the range, being greater at the right-hand end. Figure 1c,d shows the solutions presented in Equations (21) and (22) for quadratic and cubic nonlinearities, respectively. Interestingly, the behaviour of the population density is similar in both cases: the profile is similar, and the frequency decreases with time. However, the decrease in the quadratic Fisher-type case is much faster than the decrease in the cubic Huxley-type case. The final time shown for the quadratic case is (nondimensional) , whereas the final time shown for the cubic case is (nondimensional) . At these different times, the population profiles are of a similar magnitude. This difference in the time taken for the population density to decrease again highlights the importance of choosing an appropriate model for the situation under consideration [49].

The author would like to thank the anonymous referees for their useful comments on an earlier version of this paper. 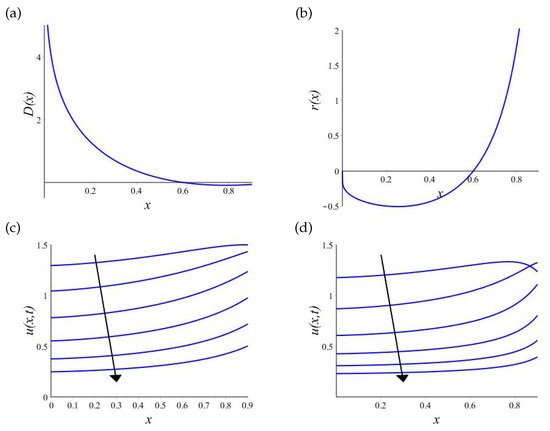 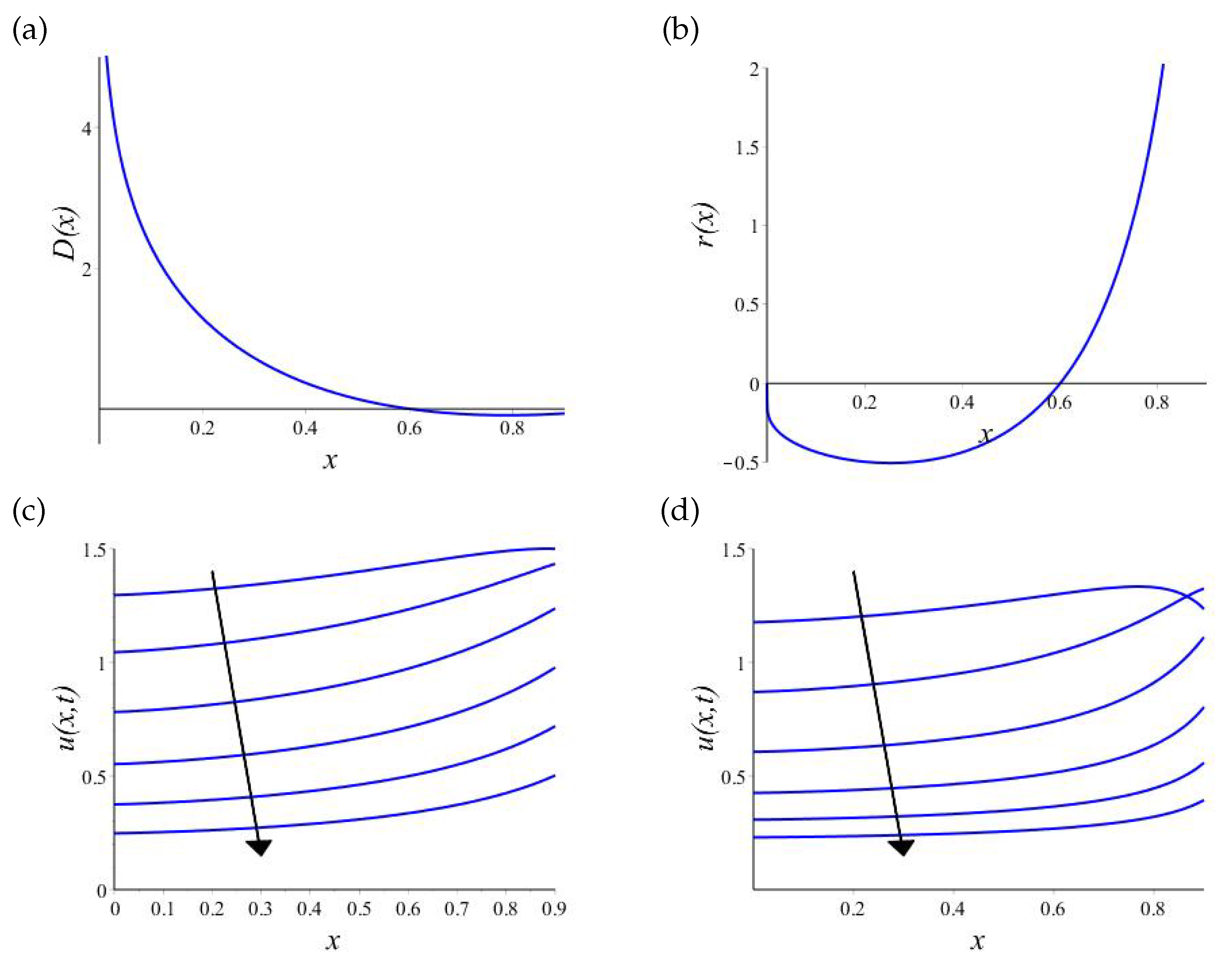