In numerous real decision-making problems, decision-makers (DMs) encounter situations involving hesitant and probabilistic information simultaneously, and DMs show behavior characteristics of nonrational preferences when they encounter decision-making situations with uncertain information. To address such multiple-criteria decision-making (MCDM) issues with hesitant and probabilistic information and nonrational preferences, a novel method, called the evidential prospect theory framework, is developed herein based on evidence theory and prospect theory, where the associated coefficients in prospect theory are given on the basis of symmetry principles (i.e., the associated coefficients are common knowledge to DMs). Within the proposed method, belief structures derived from evidence theory apply to the experts’ uncertainty about the subjective assessment of criteria for different alternatives. Then, by combining belief structures, the weighted average method is applied to estimate the final aggregated weighting factors of different alternatives. Furthermore, considering the nonrational preferences of DMs, the expected prospect values of different alternatives are derived from the final aggregated weighting factors and prospect theory, which is applied to the ranking order of all alternatives. Finally, a case involving a parabolic trough concentrating solar power plant (PTCSPP) is shown to illustrate the application of the novel method proposed in this paper. The evidential prospect theory framework proposed in this paper is effective and practicable, and can be applied to (green) supplier evaluation. View Full-Text
Keywords: prospect theory; Dempster–Shafer theory; belief structure; hesitant fuzzy prospect theory; Dempster–Shafer theory; belief structure; hesitant fuzzy
►▼ Show Figures 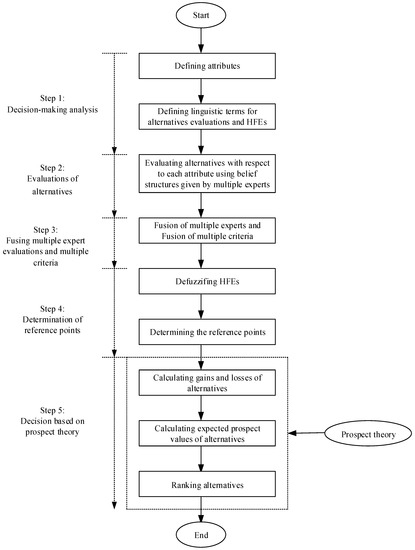