Feature Selection Based on Swallow Swarm Optimization for Fuzzy Classification

Wireless networks employing millimeter-wave (mmWave) and Massive Multiple-Input Multiple-Output (MIMO) technologies are a key approach to boost network capacity, coverage, and quality of service (QoS) for future communications. They deploy symmetric antennas on a large scale in order to enhance the system throughput and data rate. However, increasing the number of antennas and Radio Frequency (RF) chains results in high computational complexity and more energy requirements. Therefore, to solve these problems, this paper proposes a low-complexity hybrid beamforming scheme for mmWave Massive-MIMO 5G wireless networks. The proposed algorithm is on the basis of alternating the minimum mean square error (Alt-MMSE) hybrid beamforming technique in which the orthogonal properties of the digital matrix were designed, and then the MSE of the transmitted and received signal was reduced. The phase of the analog matrix was obtained from the updated digital matrix. Simulation results showed that the proposed hybrid beamforming algorithm had better performance than existing state-of-the-art algorithms, and similar performance with the optimal digital precoding algorithm.
Keywords: massive MIMO; precoding scheme; hybrid beamforming; mmWave; RF chain massive MIMO; precoding scheme; hybrid beamforming; mmWave; RF chain

The system framework is shown in Figure 1. Consider a base station configured with transmit antennas and radio links using data streams, data communication with users configuring receiver antennas, and links. The number of data streams, antennas, and RF links at the transmitter and receiver satisfies , respectively.
Where: uppercase letter represents the matrix, and lowercase letter represents the column vector. represents the inverse of matrix ; indicates the conjugate transpose of the matrix ; diag(⋅) denotes a diagonal matrix; [:,[1: ]] takes the first column of matrix ; represents the Frobenius norm of matrix ; indicates the pseudoinverse of ; Tr() represents the trace of matrix .
The modulated symbol is first processed by digital beamforming matrix for the baseband signal, and the processed signal is then subjected to analog beamforming matrix to form the final transmitted signal: where .
In this paper, using the Saleh–Valenzuela channel model [12,13,14,15,16], represents the downlink channel matrix, then received signal is expressed as:
Among them, noise vector obeys a Gaussian distribution with a mean of 0 and a variance of , that is, .
and represent, respectively, the analog merge matrix and the digital merge matrix. Assuming that the transceiver knows the state information of the channel, received signal is processed by the signal in the analog domain and the digital domain. The received symbol vector can be expressed as:
Analog combining matrix and analog beamforming matrix are implemented by using a phase shifter with phase modulation at the transceiver end. Because of limited amplitude modulation capability, the analog beamforming matrix is used, and the combining matrix elements generally satisfy constant modulus constraint , . These constraints mean that the matrix elements are unit-normalized by taking the modulus that allows to represent them with unit amplitude. In the case where the channel state information (CSI) is known, the spectral efficiency [23] of the system can be expressed as: where , represents the average transmit power of the sender.

A notable feature of mmWave communication is that the number of scatterers in the transmission path is relatively small, so the existing channel model [27] is not suitable for mmWave communication systems. The existing channel model is only intended for MIMO systems that do not address the sparse characteristics of channel and are also not applicable for mmWave bands. The channel model in [27] is also only for MIMO systems and not for massive MIMO systems, which motivated us to deploy the Saleh–Valenzuela Channel Model that has sparse characteristics, is suitable for low-rank channel estimation, and embodies the spatial correlation characteristics of mmWave communications. In response to this situation, the widely used Saleh–Valenzuela model was used [12,13,14,15,16], and mmWave channel matrix under this model can be expressed as: where and represent the number of clusters and scatterers in each cluster, respectively. represents the gain coefficient of the lth path in the ith cluster. The gain coefficient satisfies the mean of 0, variance is , and . Where is a normalization factor that causes channel matrix to satisfy condition , the matrix representation of the channel matrix is where where and represent the azimuth and elevation angles of the angle of arrival (AoA) and the angle of departure (AoD), respectively. , are the antenna array response sequences of receiver and transmitter respectively, and the transmitting and receiving antenna arrays are arranged in a uniform planar array (UPA), so the corresponding antenna-array vector is: where and are index values of the two-dimensional planar array, respectively; for the antenna array of the transceiver end, values of and are, respectively, , , where is the antenna spacing and is the signal wavelength.

In the traditional digital precoding structure, considering the complexity of the algorithm and the complexity of the mmWave MIMO system itself, the linear precoding algorithm is often used in practical systems. The MMSE algorithm is a commonly used method. The objective function in Equation (9) is obtained to calculate the final precoding matrix: subject to: where satisfies the power-limit requirement of the transmitter, and represents the average power of the transmitter.
For a hybrid beamforming structure with two stages of processing, by using the Frobenius norm on Equation (3) and taking the trace value of , the objective function in Equation (9) can be further written as:
The proposed algorithm is further equivalent to the objective function in Equation (10), and iteratively obtains a hybrid beamforming algorithm with performance close to that of pure digital beamforming.

On the basis of the traditional MMSE algorithm, an alternating MMSE (Alt-MMSE) algorithm is proposed by using the orthogonality of the digital matrix and the idea of an iterative update. The algorithm first designs the initial digital matrix, iterates on this basis to update, and finally obtains a hybrid beamforming matrix.

The purpose of the proposed algorithm is to reduce the minimum mean square error (MMSE) of the transmitted and received signals. On the basis of the initial digital matrix, the orthogonal function of the digital matrix was used to further simplify the objective function in Equation (10). Multiple iterations were performed to finally obtain a hybrid beamforming matrix. Expanding the objective function in Equation (10), we get [21,28,29]: where , and .
Utilizing the orthogonality of the digital beamforming matrix, namely, , Equation (16), assuming is known, can be further transformed to: subject to
The MMSE of the transmitted and received signals can be approximated by Equation (18), which is known by Herder’s inequality: subject to
The equation holds only when satisfies Equation (19): where . Since each element of the analog matrix satisfies the constant-modulus requirement, the analog wave obtained according to Equation (15), the phase information of each element value of the beam-shaping matrix can further obtain analog matrix , . Updated digital matrix and analog matrix are used as the initial conditions for the next update. In each iteration process, the analog matrix satisfying the constant-modulus requirement is obtained by using Equation (15), so that the designed hybrid beamforming is performed. The matrix approximates the pure digital beamforming matrix to improve the performance of the system. The specific algorithm is as follows.

In this paper, the performance of the proposed Alt-MMSE algorithm was verified by simulation with different numbers of data streams, a different number of RF links, and Signal-to-noise ratio (SNR) = 0 dB, and compared with pure digital beamforming, the OMP hybrid beamforming algorithm [20], and other references [18,19,24]. The specific simulation parameters are shown in Table 1. 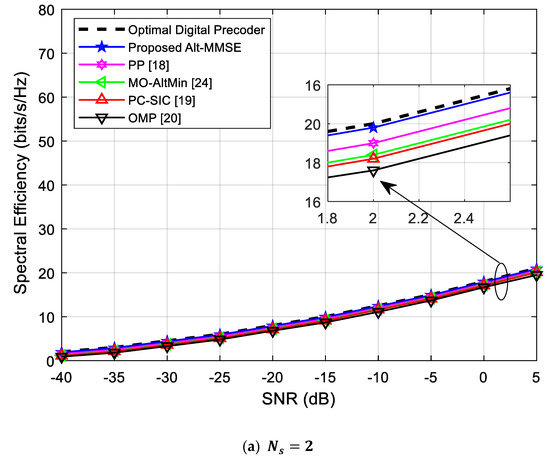 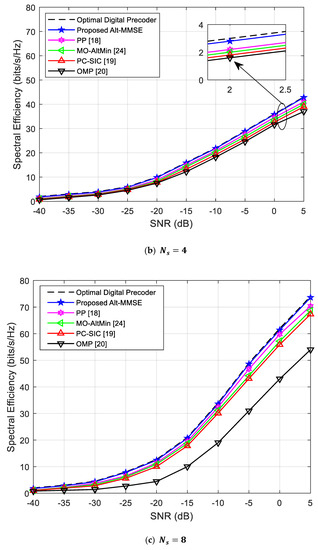 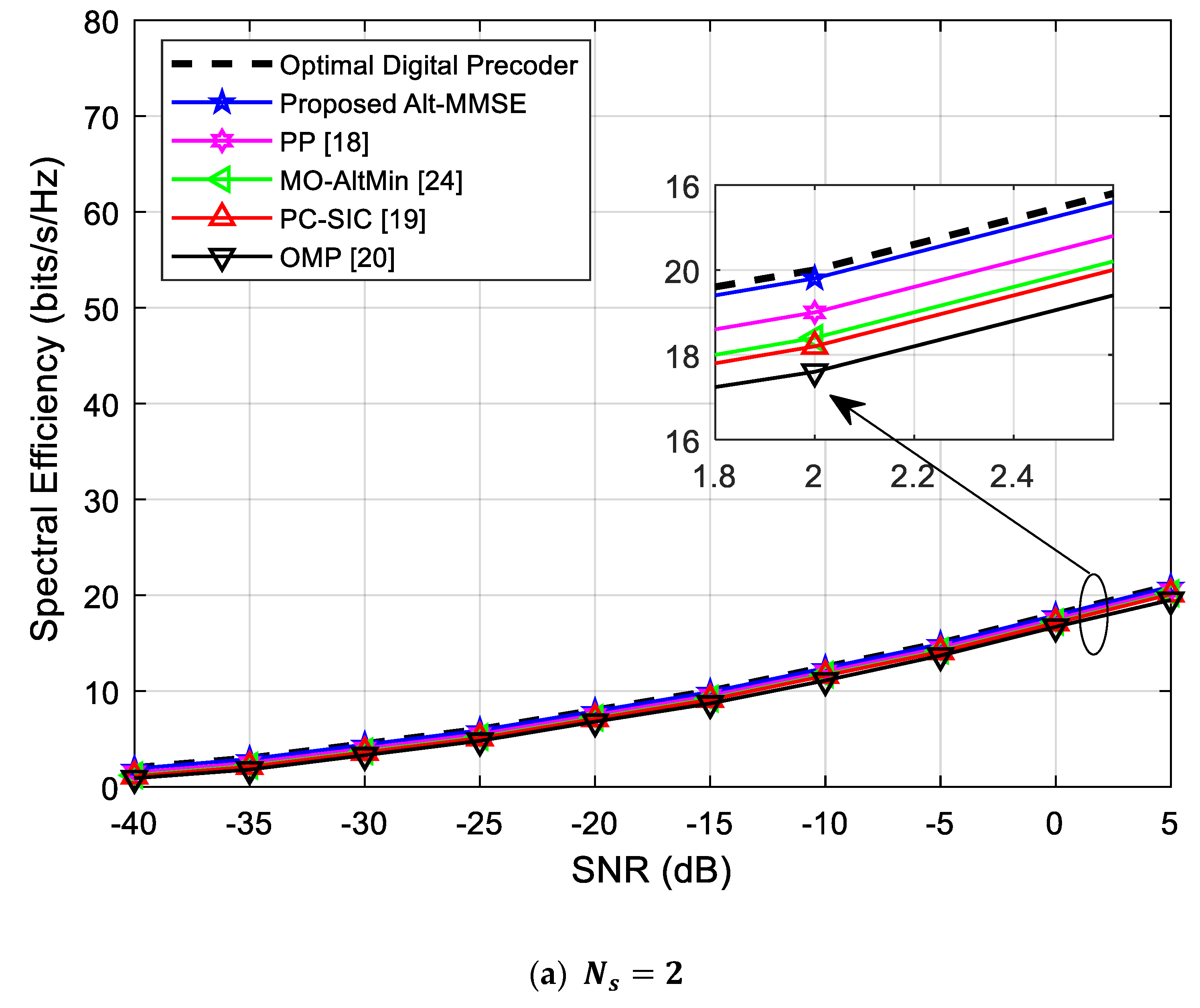 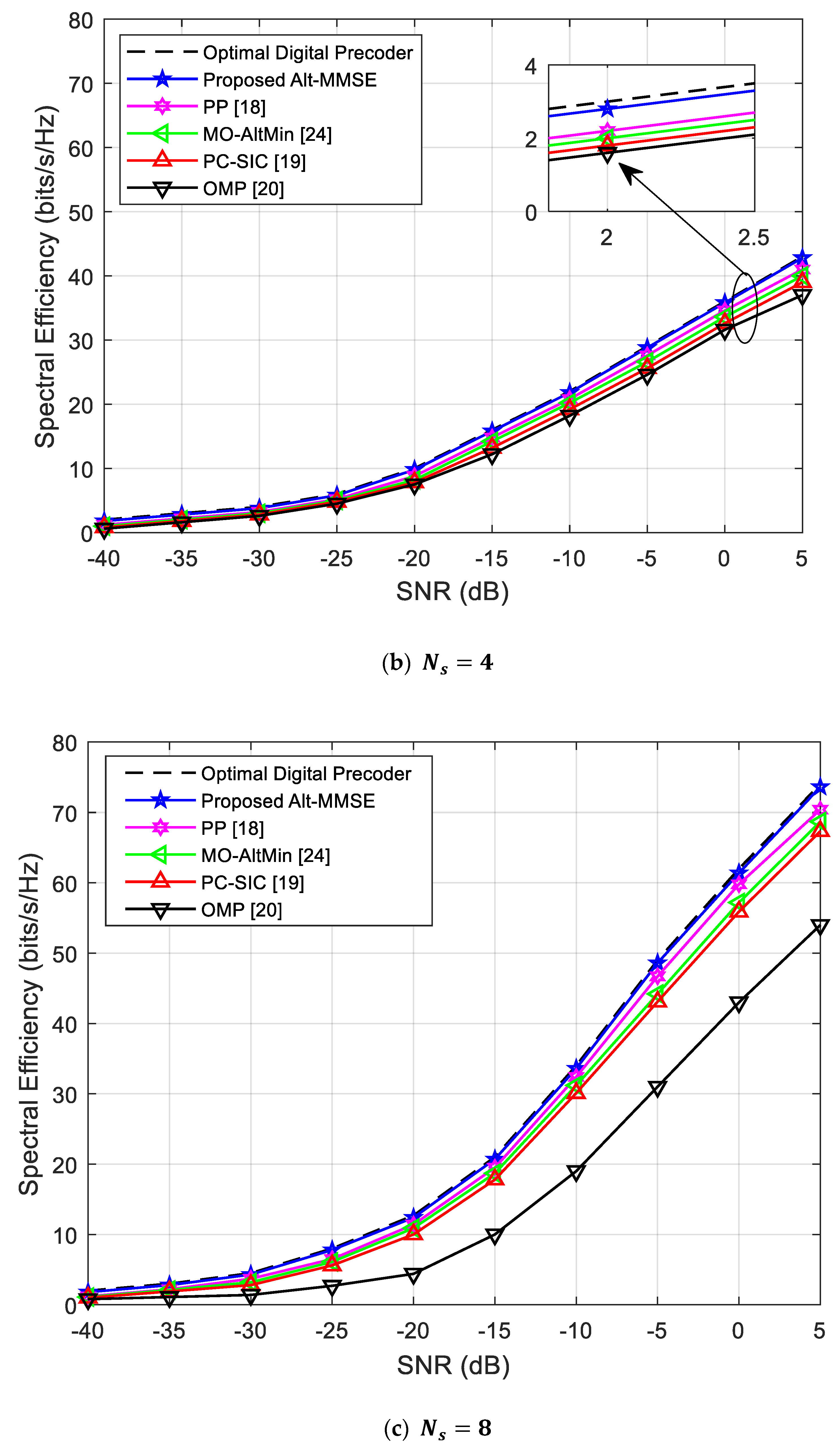 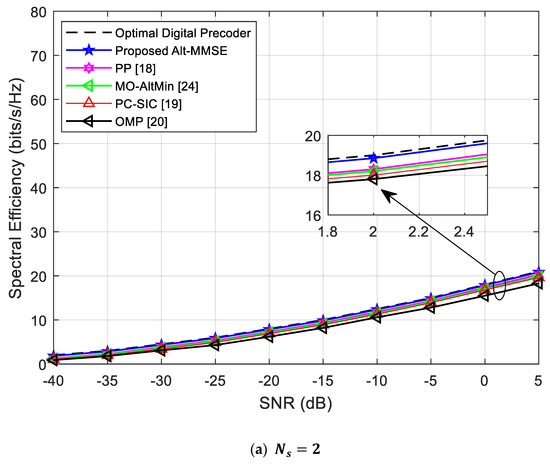 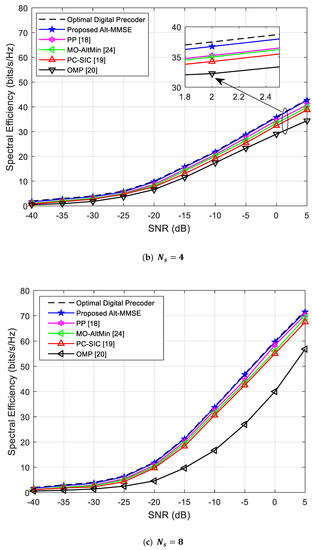 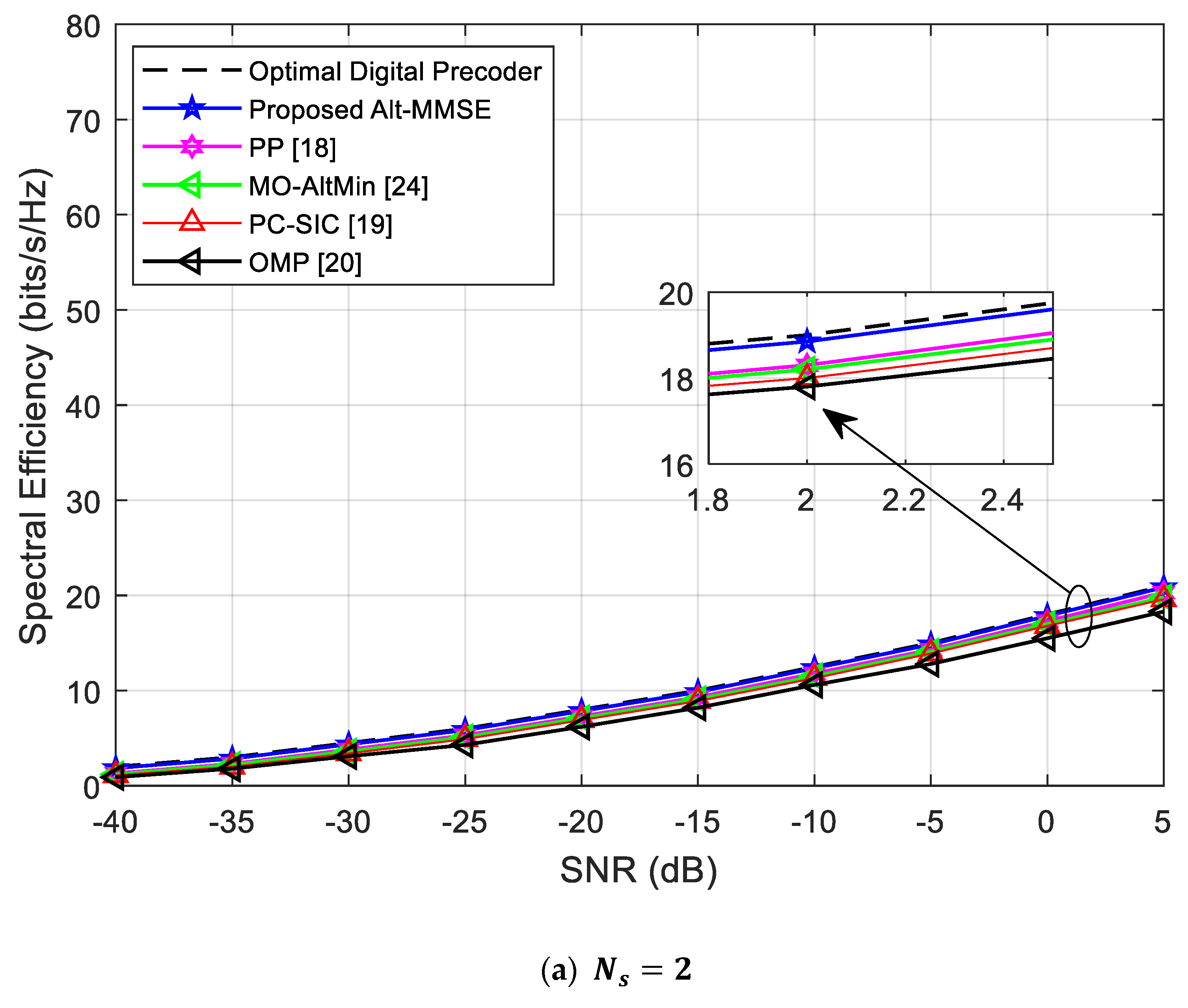 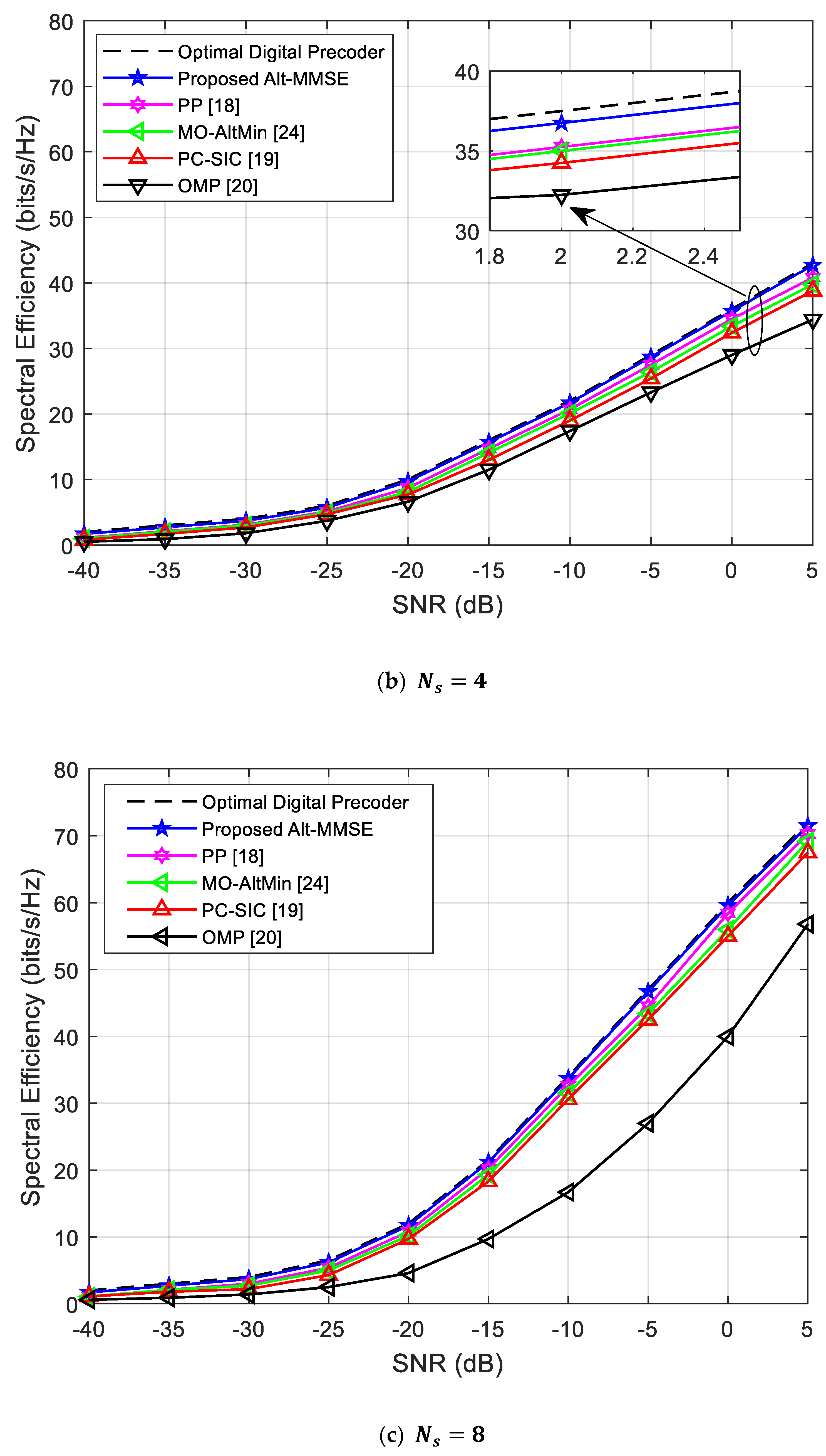 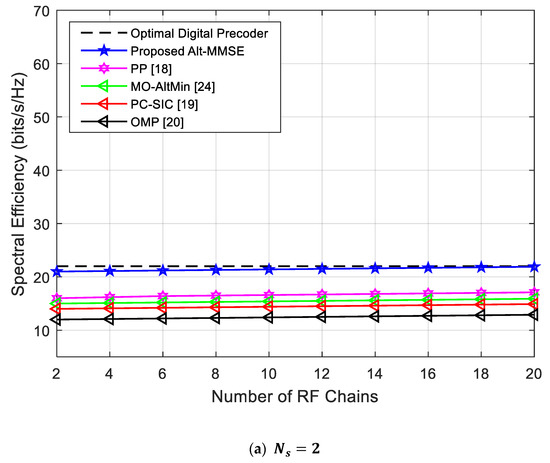 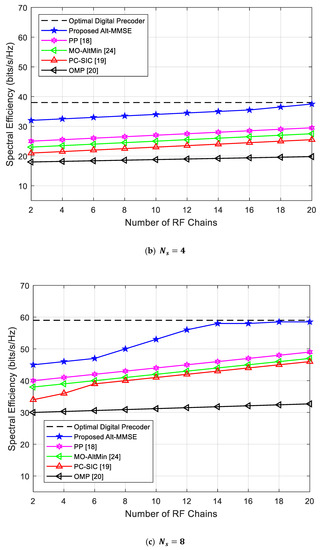 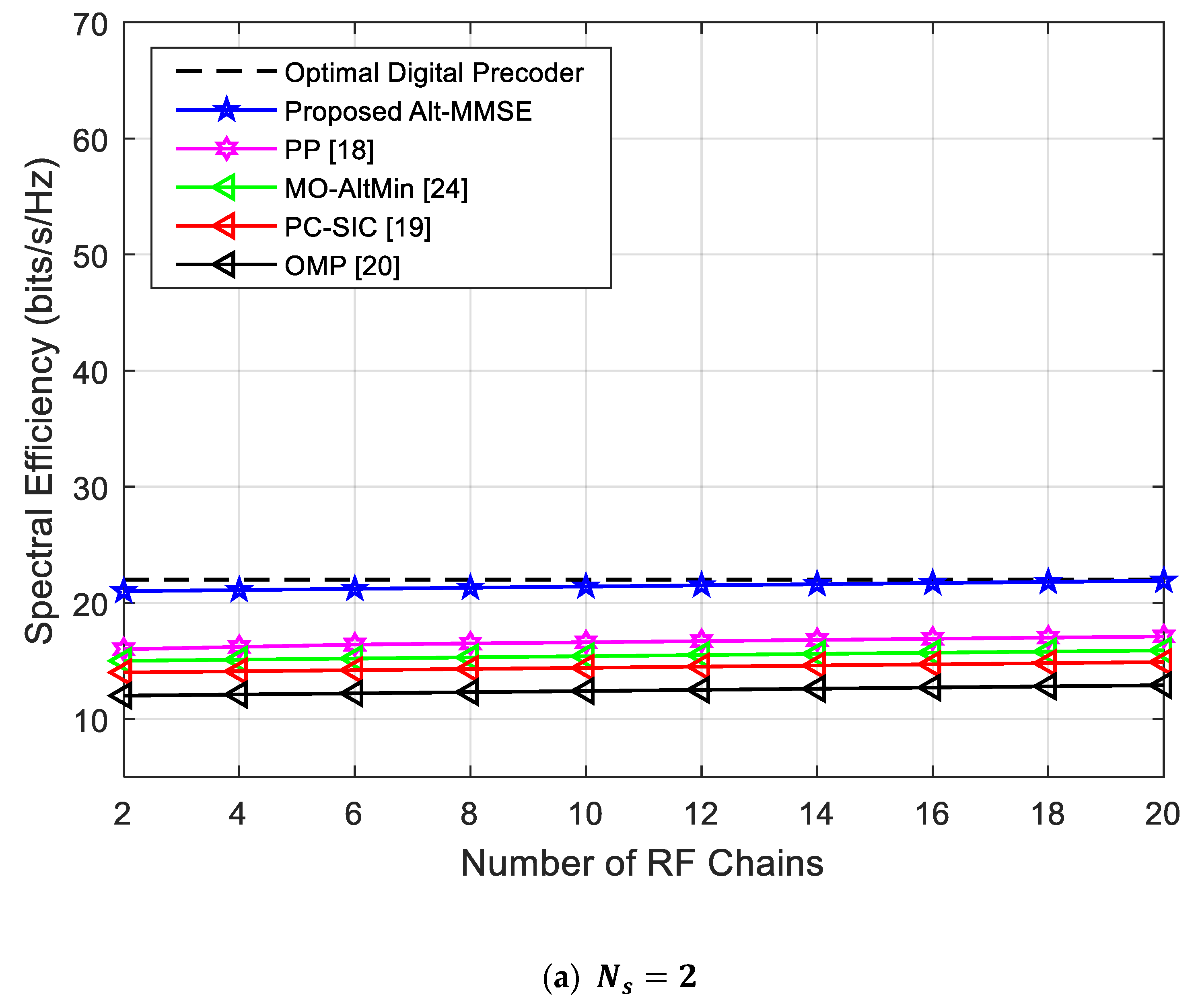 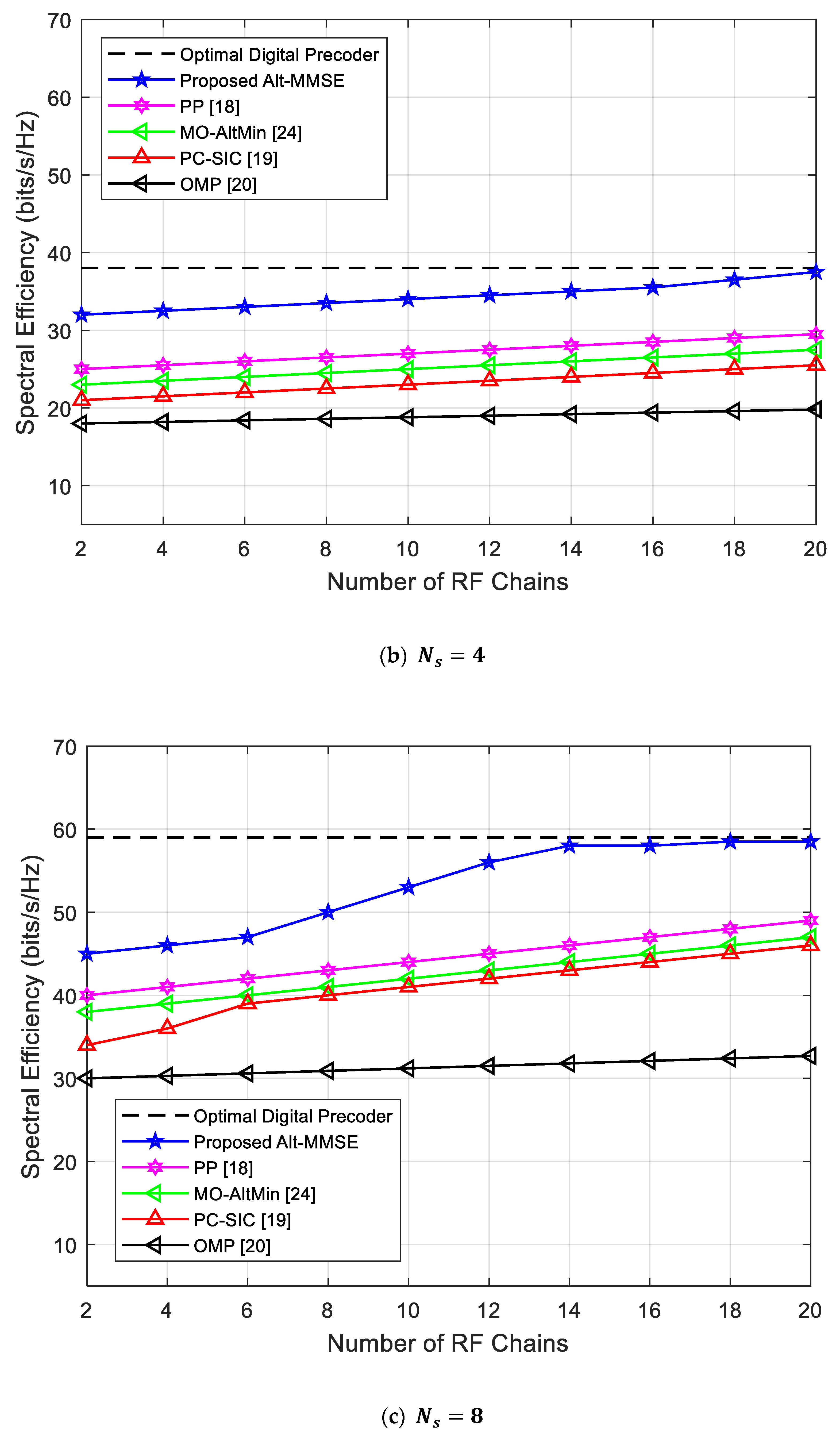 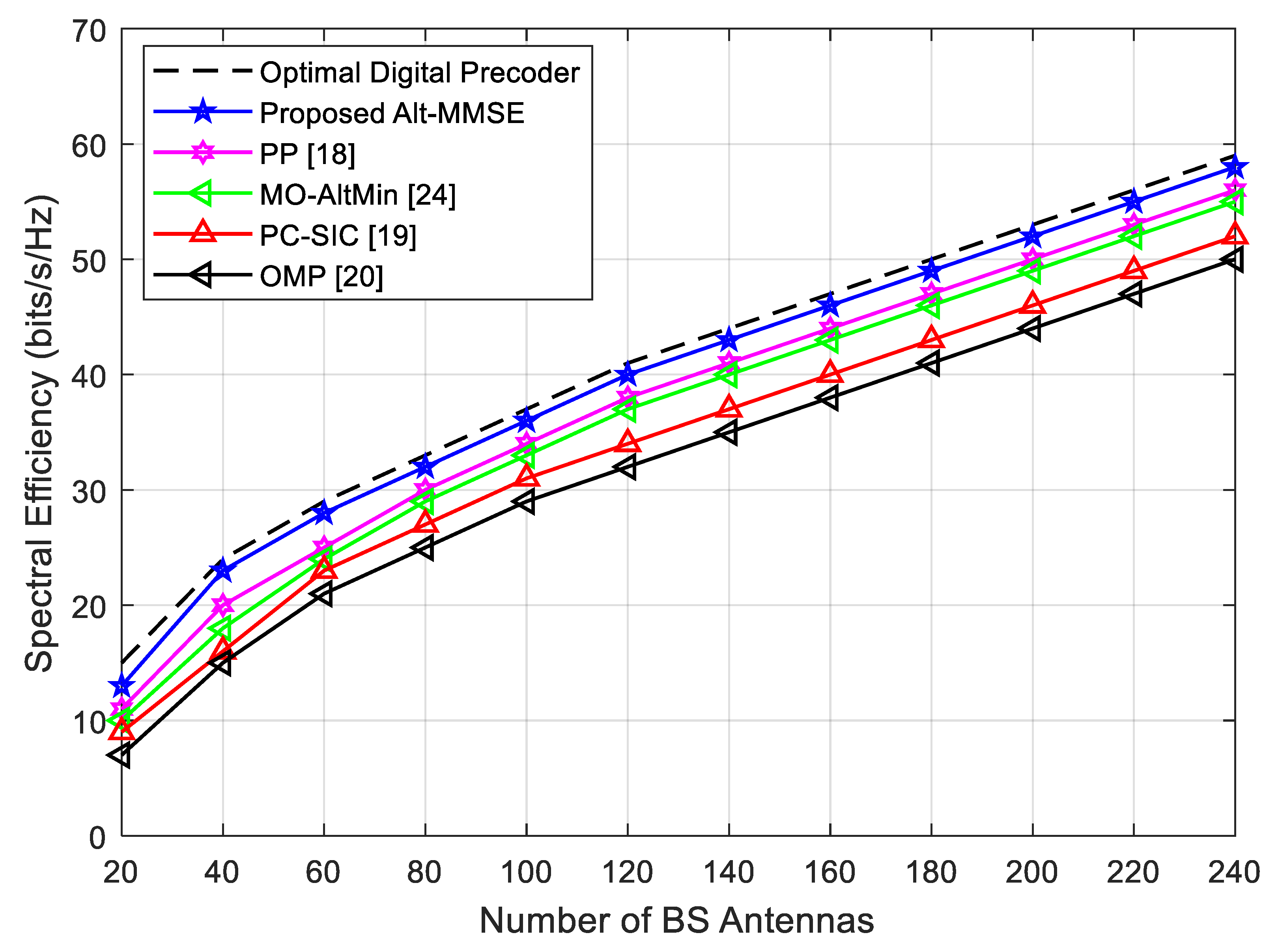 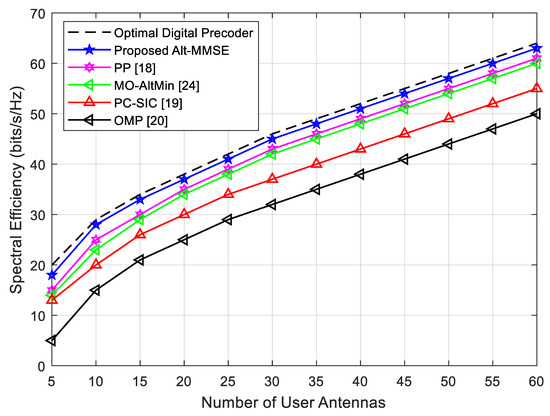 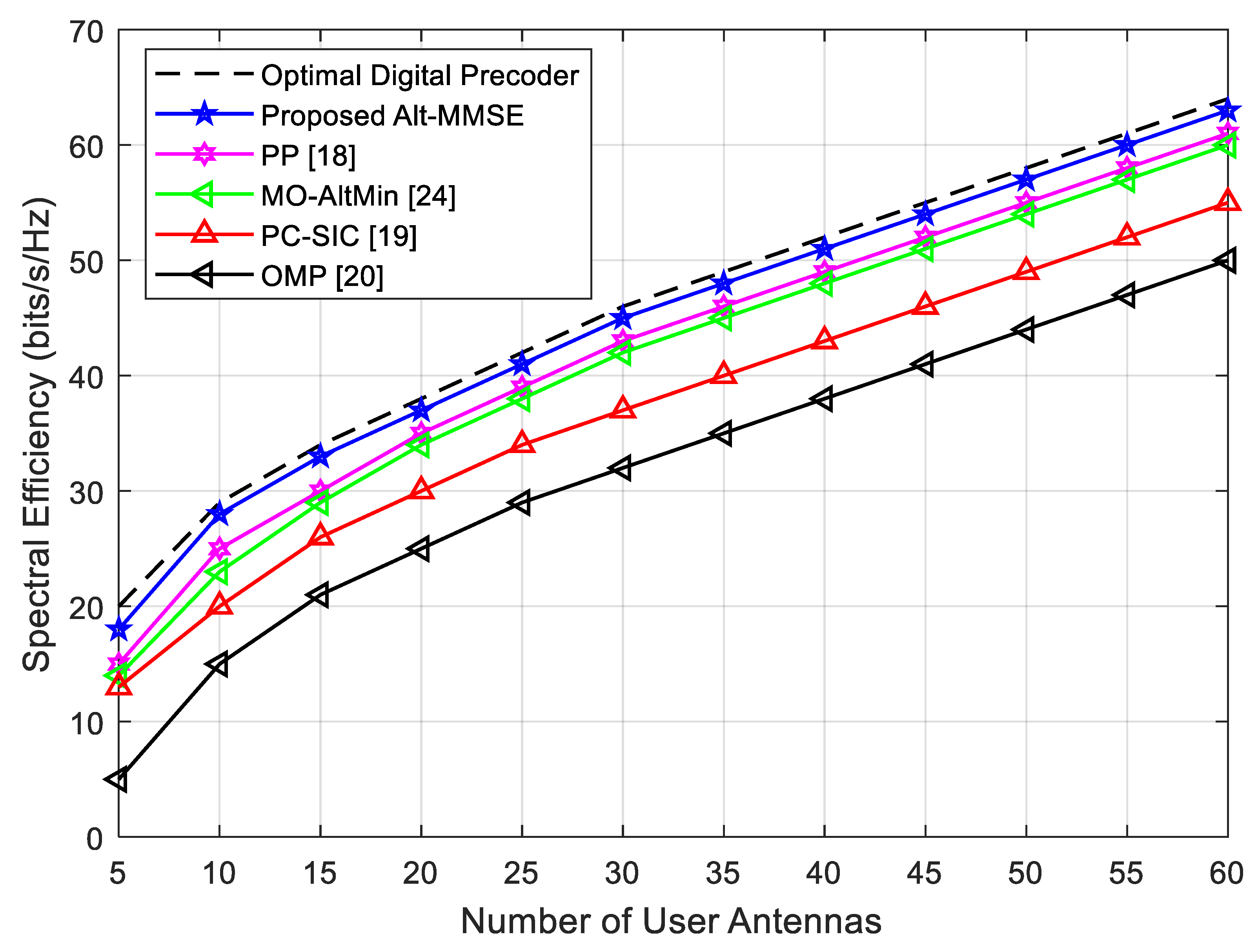 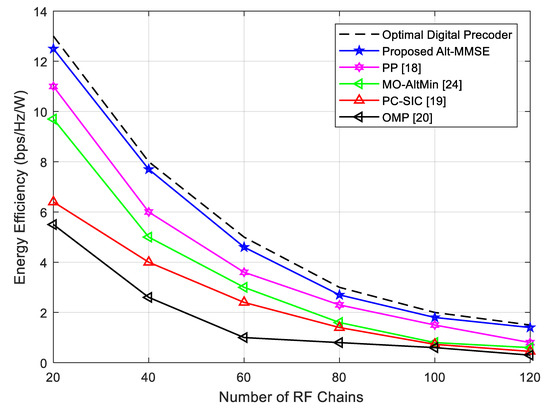 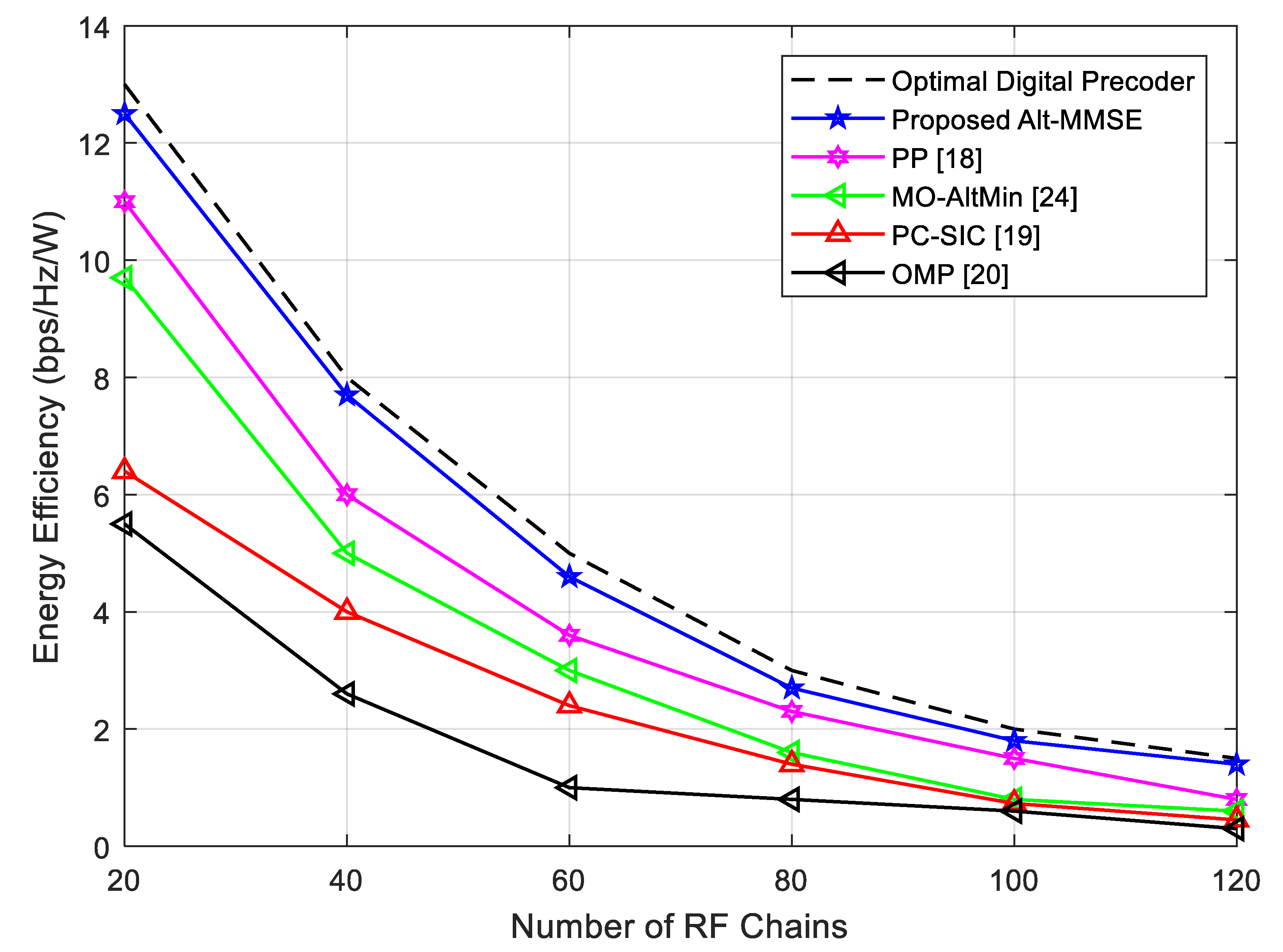 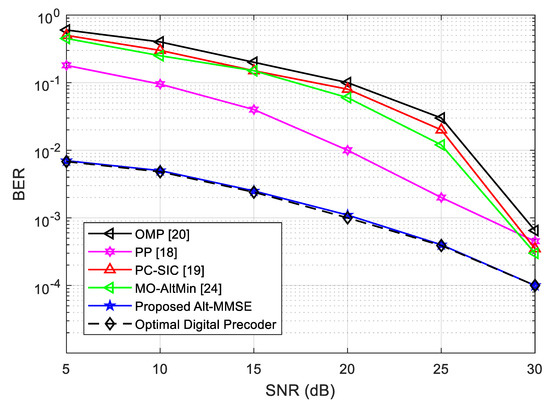 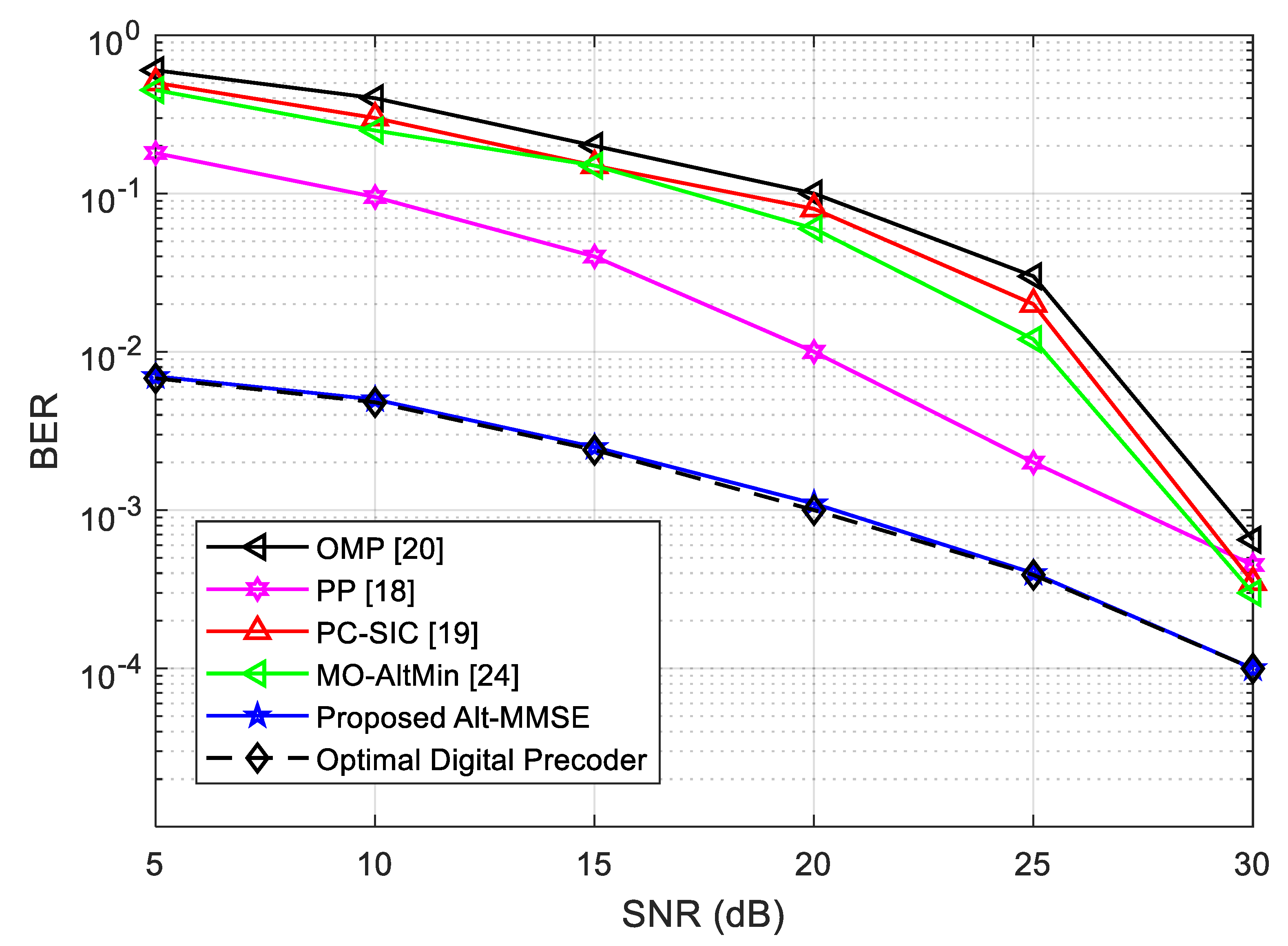 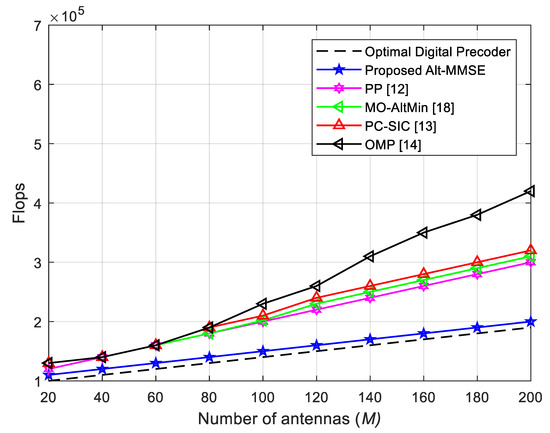 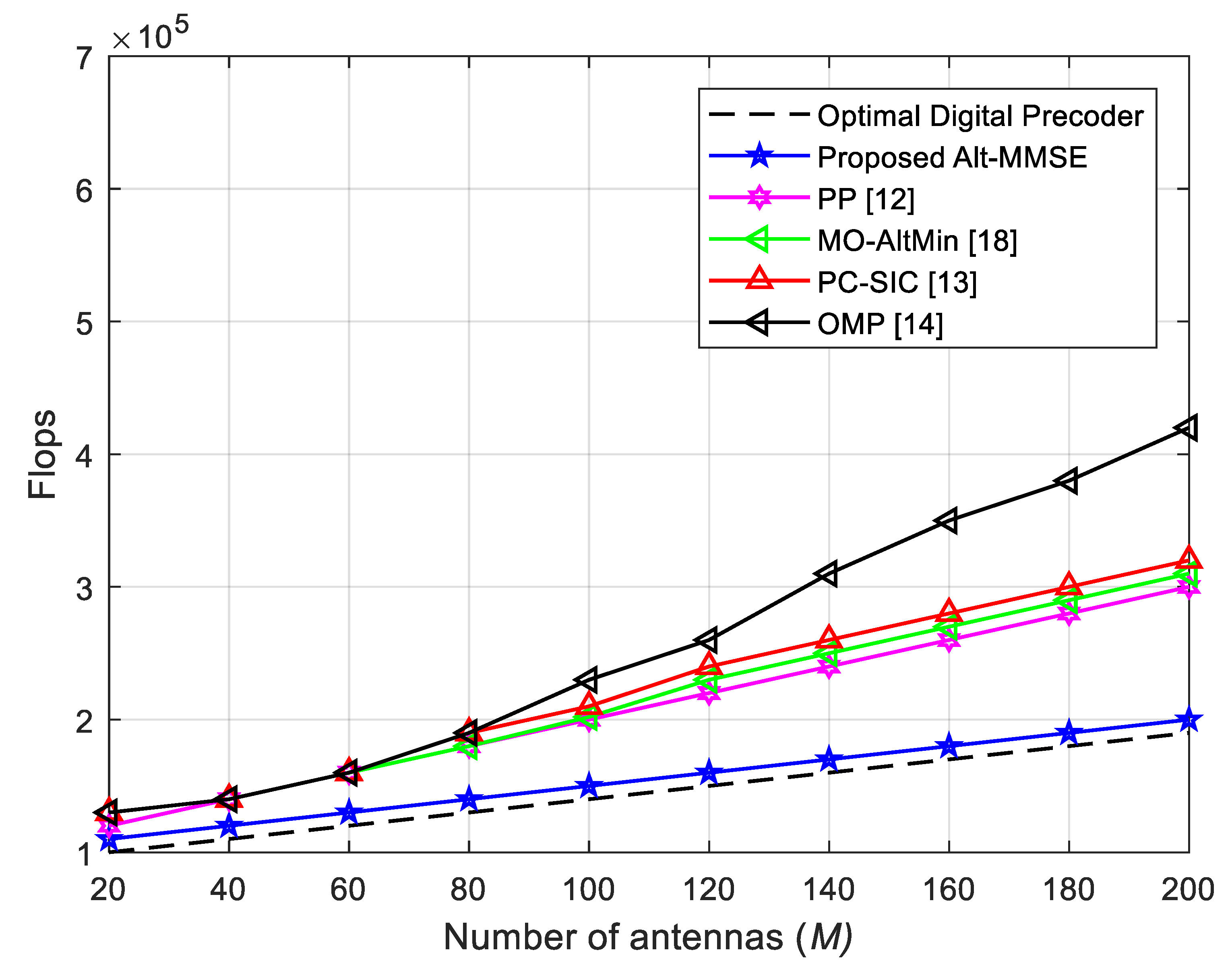 Table 2. Complexity comparison.
Table 2. Complexity comparison.
© 2019 by the authors. Licensee MDPI, Basel, Switzerland. This article is an open access article distributed under the terms and conditions of the Creative Commons Attribution (CC BY) license (http://creativecommons.org/licenses/by/4.0/).
We use cookies on our website to ensure you get the best experience. Read more about our cookies here.
Accept
We have just recently launched a new version of our website. Help us to further improve by taking part in this short 5 minute survey here. here.
Never show this again