Climate change is warming the world’s oceans at an unprecedented rate. Under predicted end-of-century temperatures, many teleosts show impaired development and altered critical behaviors, including behavioral lateralisation. Since laterality is an expression of brain functional asymmetries, changes in the strength and direction of lateralisation suggest that rapid climate warming might impact brain development and function. However, despite the implications for cognitive functions, the potential effects of elevated temperature in lateralisation of elasmobranch fishes are unknown. We incubated and reared Port Jackson sharks at current and projected end-of-century temperatures and measured preferential detour responses to left or right. Sharks incubated at elevated temperature showed stronger absolute laterality and were significantly biased towards the right relative to sharks reared at current temperature. We propose that animals reared under elevated temperatures might have more strongly lateralized brains to cope with deleterious effects of climate change on brain development and growth. However, far more research in elasmobranch lateralisation is needed before the significance of these results can be fully comprehended. This study provides further evidence that elasmobranchs are susceptible to the effects of future ocean warming, though behavioral mechanisms might allow animals to compensate for some of the challenges imposed by climate change. View Full-Text
Keywords: laterality; climate change; temperature; development; elasmobranchs laterality; climate change; temperature; development; elasmobranchs
►▼ Show Figures 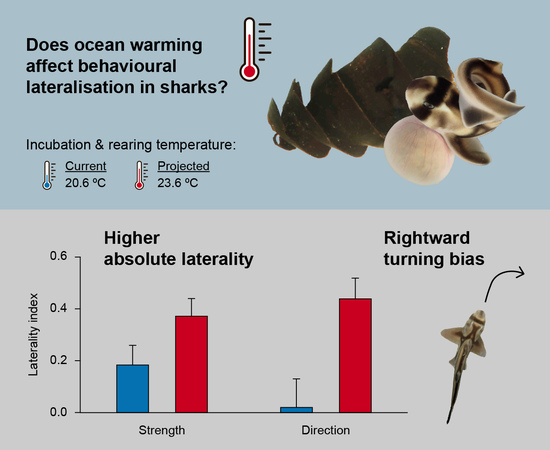