Objectives: The objective of this study was to evaluate bone reconstruction using xenograft alone and associated with bone marrow aspirate concentrate (BMAC) and hyperbaric oxygen therapy. Material and Methods: Twenty-four maxillary edentulous patients were randomly assigned into three groups: Control group (CG)—xenograft bone alone (n = 8); Group 1 (G1)—xenogeneic bone block combined with BMAC (n = 8), and Group 2 (G2)—xenogeneic bone block combined with BMAC and hyperbaric oxygenation (n = 8). Bone biopsies were harvested 6 months after grafting. Vital Mineralized Tissue (VMT), Non-vital Mineralized Tissue (NVMT), and Non-Mineralized Tissue (NMT) were measured. Computed tomography was also performed on three occasions T0 (preoperative), T4 (4 months postoperative), and T8 (8 months postoperative). The difference between T4 and T8 values with respect to T0 was used to determine the thickness level gain after 4 and 8 months, respectively. Results: The tomographic evaluation did not show significant differences between the groups either at 4 or at the 8 months postoperatively. Regarding the histomorphometric analysis, CG had the lowest percentages of VMT (36.58 ± 9.56%), whereas G1 and G2 had similar results (55.64 ± 2.83% and 55.30 ± 1.41%, respectively). Concerning NMT and NVMT levels, the opposite was observed, with CG levels of 51.21 ± 11.54% and 11.16 ± 2.37%, G1 of 39.76 ± 11.48% and 3.65 ± 0.87%, and G2 of 40.3 ± 11.48% and 4.10 ± 0.87%, respectively. Conclusions: The use of bone block xenograft associated with BMAC resulted in a significant increase of bone neoformation when compared to the xenograft alone, though hyperbaric oxygenation did not enhance the results. View Full-Text
Keywords: maxilla; bone marrow; hyperbaric oxygenation; bone xenograft maxilla; bone marrow; hyperbaric oxygenation; bone xenograft
►▼ Show Figures 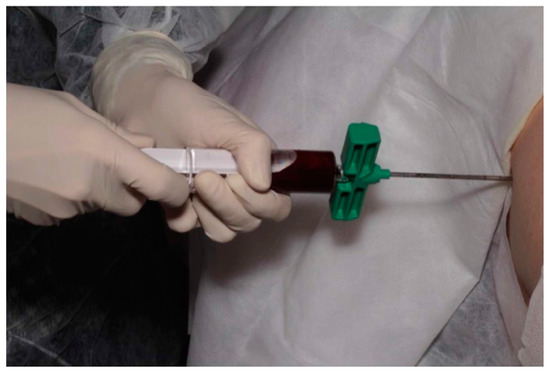