A Visual Typology of Abandonment in Rural America: From End-of-Life to Treading Water, Recycling, Renaissance, and Revival
Previous Article in Journal

Spain is one of the largest wine producers in the world, with Extremadura (south-west Spain) being its second-largest producing region after Castilla La Mancha. Within Extremadura, the most traditional and productive viticulture region is the Tierra de Barros, which boasts an annual production of 3×106 litres. However, no soil erosion assessment has been undertaken in any vineyard in the region to ascertain environmental sustainability. Therefore, the Improved Stock Unearthing Method (ISUM) and the Revised Universal Soil Loss Equation (RUSLE) were applied to assess the long-term soil erosion rates. Both methods were applied using an experimental plot (2.8 m × 148.5 m) encompassing 99 paired vines in a 20-year-old vineyard under a tillage management system and on bare soils throughout the year. The ISUM and RUSLE found total soil mobilization values of 45.7 Mg ha−1 yr−1 and 17.4 Mg ha−1 yr−1, respectively, a difference of about 5 times. Mapping techniques showed that soil surface declined to an average of −6.2 cm, with maximum values of −28 cm. The highest values of soil depletion were mainly observed in the upper part and the form of linear features following the hillslope direction. On the other hand, under the vines, the soil surface level showed accumulations of up to +2.37 cm due to tillage practices. Our study demonstrated the potential of high soil erosion rates occurring in conventional vineyards managed with tillage in the inter-row areas and herbicides under the vines within the Tierra de Barros. Also, we demonstrated the elevated differences in soil mobilisation rates using the ISUM and RUSLE. Therefore, further research must be conducted in other vineyards to determine the suitability of the models for assessing soil erosion rates. Undoubtedly, soil conservation measures must be designed and applied immediately due to high erosion rates. View Full-Text
Keywords: Tierra de Barros; soil erosion; ISUM; RUSLE; soil management system; vineyards Tierra de Barros; soil erosion; ISUM; RUSLE; soil management system; vineyards
►▼ Show Figures 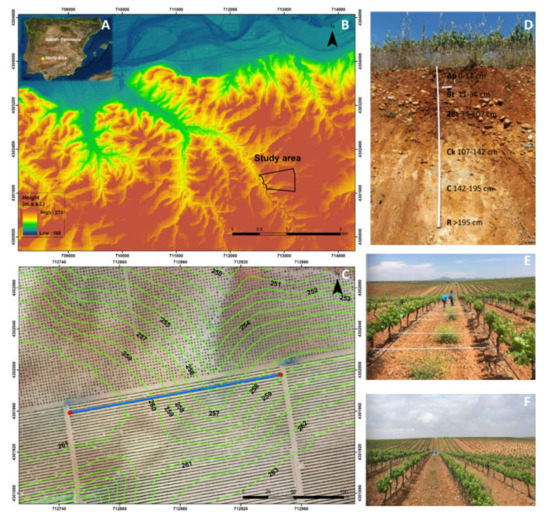