Assessing Climate Smart Agriculture and Its Determinants of Practice in Ghana: A Case of the Cocoa Production System
Previous Article in Special Issue

Investigation of Collapsed Building Incidents on Soft Marine Deposit: Both from Social and Technical Perspectives

The core of the MCRF post-classification method is the coMCRF model [40] and the SS-coMCRF model [42], which incorporate all related data into a final classification through the post-classification operation to improve the accuracy of land use/cover classification. The coMCRF model is an extension of the MCRF model proposed by Li [43] in order to incorporate auxiliary data. The SS-coMCRF model is a modification of the coMCRF model in order to reduce the smoothing (or filtering) effect in post-classification, by incorporating spectral similarity measures based on the spectral values of the original remotely sensed image used in pre-classification. So, when the original remotely sensed image for land use/cover classification is available, the SS-coMCRF model can be used to reduce the loss of geometric features of some land use/cover classes in land use/cover post-classification.
Li [43] introduced the MCRF theory and the Markov chain geostatistical approach for simulating categorical fields. The MCRF model was derived by applying Bayes’ theorem [44] and sequential Bayesian updating to nearest data within a neighborhood and could be visualized as a probabilistic directed acyclic graph [40], thus being consistent with Bayesian Networks [44,45]. The conditional independence assumption for nearest data within a neighborhood, extended from a property of Pickard random fields, was used to simplify the MCRF full solution to a form that contains only transition probabilities [43,46]. The transiogram concept is one of the important components in this model. Li [47] introduced the transiogram as an accompanying spatial correlation measure of Markov chain geostatistics. The transiogram theoretically refers to a transition probability-lag function: where represents the transition probability from class i to class j, Z(u) stands for a spatially stationary random variable at a specific location u and h, as a vector variable, refers to the separate distance between the two spatial points u and u + h. Visually, the transiogram is a transition probability-lag curve. While an auto-transiogram represents the autocorrelation of a land use/cover class, a cross-transiogram (i ≠ j) represents the cross-correlation of a pair of land use/cover classes. As transition probability, cross-transiograms are asymmetric and can be unidirectional.
Considering four nearest data and the quandrantal neighborhood (i.e., seeking one nearest datum from each quadrant sectoring the circular search area if there are nearest data in the quadrant), the SS-coMCRF model [42] can be given as: where represents the location vector of a pixel, refers to the land use/cover class of the unobserved pixel at location ; to are the states of the four nearest neighbours around the unobserved location within a quadrantal neighbourhood; the left hand side of the equation is the posterior probability of class ; is a specific transition probability over the separation distance between locations and , which can be fetched from a corresponding transiogram model; represents the cross-field transition probability from class at the location in the primary field being simulated to class at the co-location in the covariate field (here the pre-classified image); and Spectrum here means the spectral data of the original remotely sensed image for pre-classification, which are used to calculate the spectral similarity-based constraining factor .
In above equation, the spectral similarity-based constraining factor S is calculated as: where is the land use/cover class of pixel l; and are the spatial correlation measure (i.e., correlation coefficient) and Jaccard index of the spectral vectors (i.e., spectral values of different bands) and of pixel l and pixel k, respectively. See [42] for a detailed description of the SS-coMCRF model and the spectral similarity-based constraining factor.

3.3. Inputs and Outputs for the SS-coMCRF Model

In order to perform simulation using the SS-coMCRF model, cross-field transition probability matrix and transiogram models are required as input parameters, besides pre-classified image data, original remotely sensed image and expert-interpreted sample data. Transiogram models provide transition probability values at any needed lag values. Li and Zhang [48] proved that linear interpolation is more efficient than model fitting when samples are adequate and experimental transiograms are reliable. To take the advantage of the linear interpolation method, sufficient expert-interpreted sample data were selected to create reliable experimental transiograms in this study. Figure 4 shows a subset of transiogram models estimated from the expert-interpreted sample dataset for the Cixi case study. Table 2 shows the cross-field transition probability matrix, which expresses the cross correlations between classes of sample data and the pre-classified image data. One cross-field transition probability matrix is enough for a collocated co-simulation conditioned on one auxiliary data set and it can be calculated using the transitions from the selected sample points to their corresponding collocated points in the pre-classified image [40].
For each simulation case, the SS-coMCRF model generated one hundred of simulated realizations. Occurrence probabilities of land use classes at all pixels were estimated from the simulated realization maps. Based on the maximum probabilities, an optimal post-classification map was achieved for each case. After that, confusion matrix and Kappa coefficient were used to calculate the accuracy of each optimal post-classification map and pre-classified image using the corresponding validation data set.

The object-based classification (OBC) approach was initially introduced in 1970s [49,50]. With the increased demand for OBC methods, many GIS software systems are available to use this kind of methods for classification. ENVI is one of the most commonly used software systems and it provides a K-Nearest Neighbor (KNN) object-based classification method. Due to its simplicity in implementation, clarity in theory and good performance in classification, KNN has become one of the most commonly used OBC methods. Therefore, the KNN method was employed for object-based classification in this study. The KNN object-based classification process has two steps: segmentation and classification. Segmentation is the way to partition a remote sensing image into different objects by merging pixels with similar attributes [51,52]. Segmentation is the most important part in object-based classification, because it can divide an image into homogeneous objects and ensure the classification results more accurate [50].
The KNN method was employed to segment an original remotely sensed image into land use segments and then chose a set of segments as training data based on different land use/cover classes to classify the segments. The parameters of segmentation were chosen based on visual inspection and researcher’s experience. Too many segments could increase processing time and were not necessary. In segment settings, the value of parameter Edge was set to 30 for detecting edges of features where objects of interest have sharp edges. Adjacent segments with similar spectral attributes can be merged. In this study, the value of Merge Level was set to 90 to merge over-segmented areas by using the Full Lambda Schedule algorithm. The value of Texture Kernel Size is the size (in pixels) of a moving box centered over each pixel in the image for computing texture attributes, which was set to 3. The resulting segments can clearly show boundaries of each land cover type. Because we conducted example-based classification, training data for classification were selected from segmented components. The number of object-based training samples was determined based on the researcher’s experience and 1000 object samples were randomly selected for each study case. Each training sample was chosen to contain only one land cover type. Based on the training samples and segments’ proximity to neighboring training regions, the KNN method assigned segments into different classes with the highest class confidence value.

This research is partially supported by USA NSF grant No. 1414108. Authors have the sole responsibility to all of the viewpoints presented in the paper. 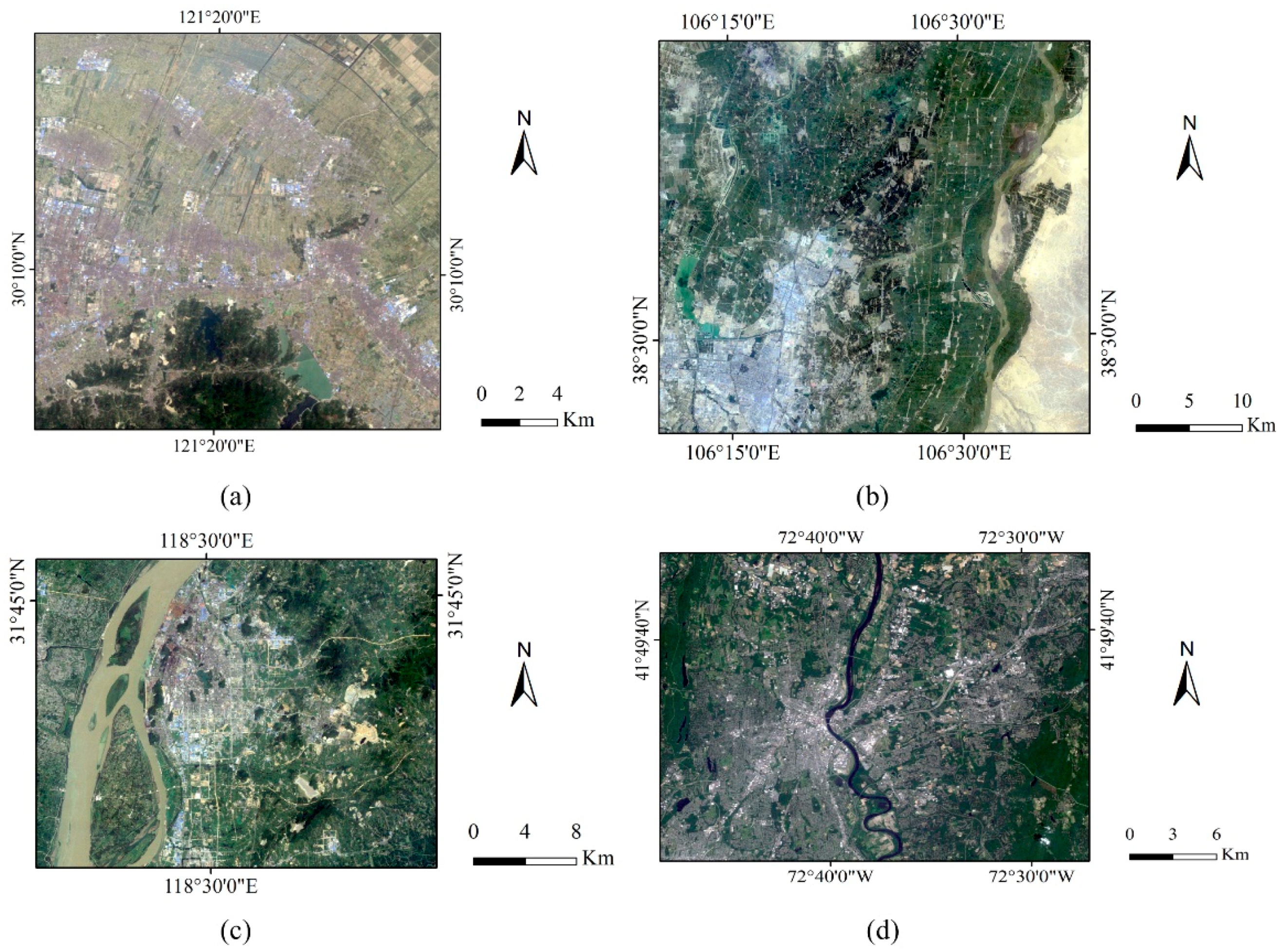