Impacts of Ground Fissures on Soil Properties in an Underground Mining Area on the Loess Plateau, China

Hotspots of Yield Loss for Four Crops of the Belt and Road Terrestrial Countries under 1.5 °C Global Warming

The Fifth Assessment Report of the Intergovernmental Panel on Climate change (IPCC) shows that climate change poses severe risks to the Belt and Road region and could cut future crop production. Identifying the positions and features of hotspots, which refer to regions with severe yield loss at 1.5 °C global warming, is the key to developing proper mitigation and adaptation policies to ensure regional food security. This study examined yield loss hotspots of four crops (maize, rice, soybean and wheat) at 1.5 °C global warming under RCP8.5. Yield data were derived from simulations of multiple climate-crop model ensembles from the Inter-Sectoral Impact Model Intercomparison Project (ISI-MIP). Hotspots were identified by setting a threshold of the 10th percentile of crop yields during the reference period (1986–2005). To quantify the likelihood of crop yield loss hotspots within multi-model ensembles, the agreement of model combinations for hotspots was calculated for each crop at the grid scale with 0.5° × 0.5° spatial resolution. Results revealed spatial heterogeneity of cultivation structure and hotspot likelihood for four crops. The four crops’ production of SA (South Asia) and SEA (Southeast Asia) accounts for more than 40% of the total production in the Belt and Road region, roughly four times the amount produced in CEE (Central and Eastern Europe) and NEA (Northeast Asia). Besides, the hotspots likelihood of maize, rice and soybean is generally larger in SA/SEA than that in CEE/NEA which means the risk of yield reduction is higher in the current main agricultural area. According to IPCC’s classification rules for likelihood, four crops’ hotspot patterns were displayed under the 1.5 °C global warming. As the highest-yielding crop, maize shows the largest proportion of “likely” hotspots (hotspot likelihood > 66%), which is about 6.48%, accounting for more than four times that of the other three crops. In addition, four crops’ hotspots are mainly distributed in SEA and SA. Overall, SEA and SA are vulnerable subregions and maize is the vulnerable crop of the Belt and Road region. Our results could provide information on target areas where mitigation or adaptations are needed to reduce the adverse influence of climate change in the agricultural system. View Full-Text
Keywords: the Belt and Road; global warming; 1.5 °C; crops; yield; hotspots; likelihood; ISI-MIP the Belt and Road; global warming; 1.5 °C; crops; yield; hotspots; likelihood; ISI-MIP
►▼ Show Figures 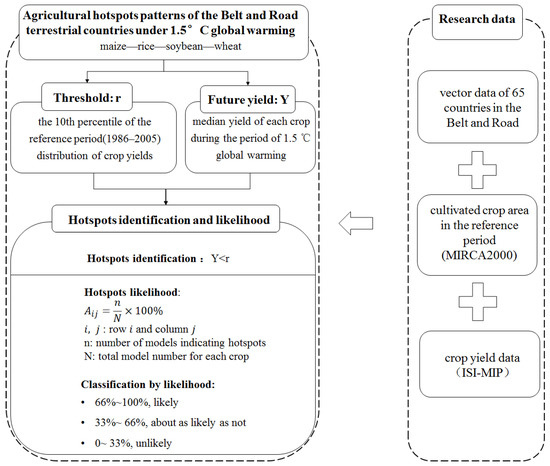