The Impact of China Carbon Emission Trading System on Land Use Transition: A Macroscopic Economic Perspective

The carbon emission trading system (CETS) is a milestone policy in the history of China’s emission trading system, which is of great significance to China’s realization of “carbon peak and carbon neutralization”. As an important component of sustainable development, LUT should be related to the CETS. However, in the literature on the CETS, little material deals with its impact on land use transition (LUT). This paper will enrich this literature. Based on 30 provincial regions in China from 2011 to 2017, using the DID and entropy methods, this study investigated the impact of CETS on the trend of LUT from three perspectives: economic effects, environmental effects and Porter effects. The conclusions are that (1) the implementation of the CETS hindered economic development, but optimized energy-use efficiency; (2) the implementation of the CETS reduced the emissions of CO2 and SO2; (3) the implementation of the CETS did not produce a Porter effect; and (4) the influence of the CETS had the characteristics of a spatial cluster. These findings offer some guidance for improving CETS policies and formulating similar environmental regulation policies.
Keywords: carbon emission trading system; land use transition; sustainable development; difference-in-difference carbon emission trading system; land use transition; sustainable development; difference-in-difference

The entropy method, which is a comprehensive indicator method, has the characteristic of giving weights through the deviation between variables. When the uncertainty between variables is greater, the degree of deviation is also greater, indicating that it contains more valid information and it is therefore assigned a higher weight. Conversely, variables that contain less valid information are naturally given less weight. Based on this characteristic, the entropy method has the advantage of alleviating information overlap among variables and giving weights objectively. In addition, the weight of each secondary indicator reflects its contribution to the composite indicator, which allows scholars to further explore the impact of the refined indicators [65]. Referring to the method of Tang et al. [66], the basic steps of the entropy method that was used in this paper are as follows. We used MATLAB R2016a software to realize the measurement.
Step 1: Suppose i is region i, b is indicator b (1 ≤ b ≤ k), and t is period t. The term xi,b,t is the element of the bth indicator in period t of region i. We derived the normalized form of xi,b,t by using Equation (3).
Step 2: Information entropy was assumed to be Eb,t, which reflects the intensity of the amount of information contained in the bth indicator in period t in all regions. The number 30 refers to the 30 provinces and municipalities directly under the central government that were involved in this study. The specific equation is as follows.
Step 3: The weight of the bth indicator in period t (Wb,t) was calculated. The term k is the total number of indicators.

LUT can refer to the process of land use pattern changes that occur over time corresponding to the transition between economic and social development stages, which are inseparable from economic activities. In this paper, the change tendency of LUT is measured in three dimensions: the economic, environmental and Porter effects of the CETS. The construction of the indicators for these three dimensions of LUT is described below (Table 1).
The core explanatory variable in this study is the interaction term of the treatment group dummy variable and the treatment period dummy variable (Treati × Postt). According to the previous analysis, Treati × Postt needs to reflect whether region i in period t is a pilot region that has implemented CETS. When Treati × Postt = 1, this indicates that region i is a pilot region and period t occurred in the year of the CETS policy’s implementation or after. Otherwise, Treati × Postt = 0. Equation (6) is the constructive equation of Treati × Postt.

This study examined 30 provinces and municipalities that were directly under the control of the central government in China from 2011 to 2017. Considering data integrity and statistical caliber, the Tibet Autonomous Region, Hong Kong and Macao Special Administrative Regions, and Taiwan were excluded from the scope of the study. The primary data that were used in this study were mainly sourced from the China Statistical Yearbook, China Environmental Statistical Yearbook, provincial statistical yearbooks, and the China Research Database Service Platform (CNRDS). The data on carbon emissions were obtained from the China Emission Accounts and Datasets (CEADs), the measurement of which can be found in Shan et al. [73,74]. Table 2 reports the basic information of all of the variables that are involved in this study.

4.1. Discussion of the Combination of the Empirical Results and the Entropy Method Results

This sub-section combines the regression results of Section 3 with the weight changes of each secondary indicator as reported in Table 1.

Based on the above conclusions and discussions, this sub-section presents the spatio-temporal evolutionary trends of ELT and GDT data on the provincial-level regional distribution map of China (Figure 4) through the use of ArcMap software. In order to better demonstrate the trends of the variables, this study processed the ELT and GDT data as follows (taking ELT as an example).
Step 1: Taking 2013 as the threshold, the average of ELT in 2011 and 2012 was taken as the proxy variable Prei for ELT before the policy shock. Similarly, the average of ELT from 2013 to 2017 was taken as the proxy variable Posi for ELT after the policy shock.
Step 2: We calculated the Changei variable, which reflects the degree and direction of change in ELT before and after the policy shock. Changei = Posi-Prei—if the sign of Changei is negative, the ELT decreases after the CETS policy shock in region i.
Step 3: The Changei variables were input into the distribution map of provincial areas in China (Figure 4a) through the ArcMap software and, at the same time, the eight areas with the most reduced tendencies were specifically marked out, representing the eight provinces with the most reduced economic values before and after the CETS policy was implemented.
We undertook the same measures for the GDT data in order to obtain Figure 4b. If the sign of the Changei variable is negative, this means that the GDT of region i decreased after the CETS policy shock and the environmental pollution level in region i was improved.
According to Figure 4a, the economic level decreased in 20 provinces before and after the CETS policy took effect. Six CETS pilot regions declined economically, with Beijing, Tianjin, Shanghai, and Guangdong being among the top eight provinces in terms of decline. These four provinces and cities have higher economic levels and are therefore more affected by the CETS. Similarly, it can be found that the provinces with declining ELTs are mainly concentrated in the eastern coastal region and its adjacent areas and there are clustering characteristics.
Figure 4b, shows that there were 14 provinces with improved environmental pollution before and after the CETS policy took effect. Six CETS pilot areas showed improved environments, with Beijing, Tianjin, Shanghai, Hubei, and Chongqing in the top eight provinces in terms of change. This indicates that, although there are non-pilot areas where the environment improved, the degree of improvement was overall less than that in the pilot areas affected by the CETS policy. In addition, the environmental improvement provinces are mainly concentrated in the eastern and central regions and are adjacent to each other, with clustering characteristics.

Raw data is available from a paid database, please contact the corresponding author if needed. 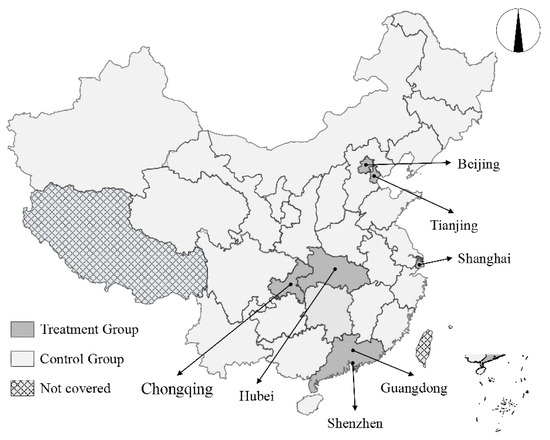 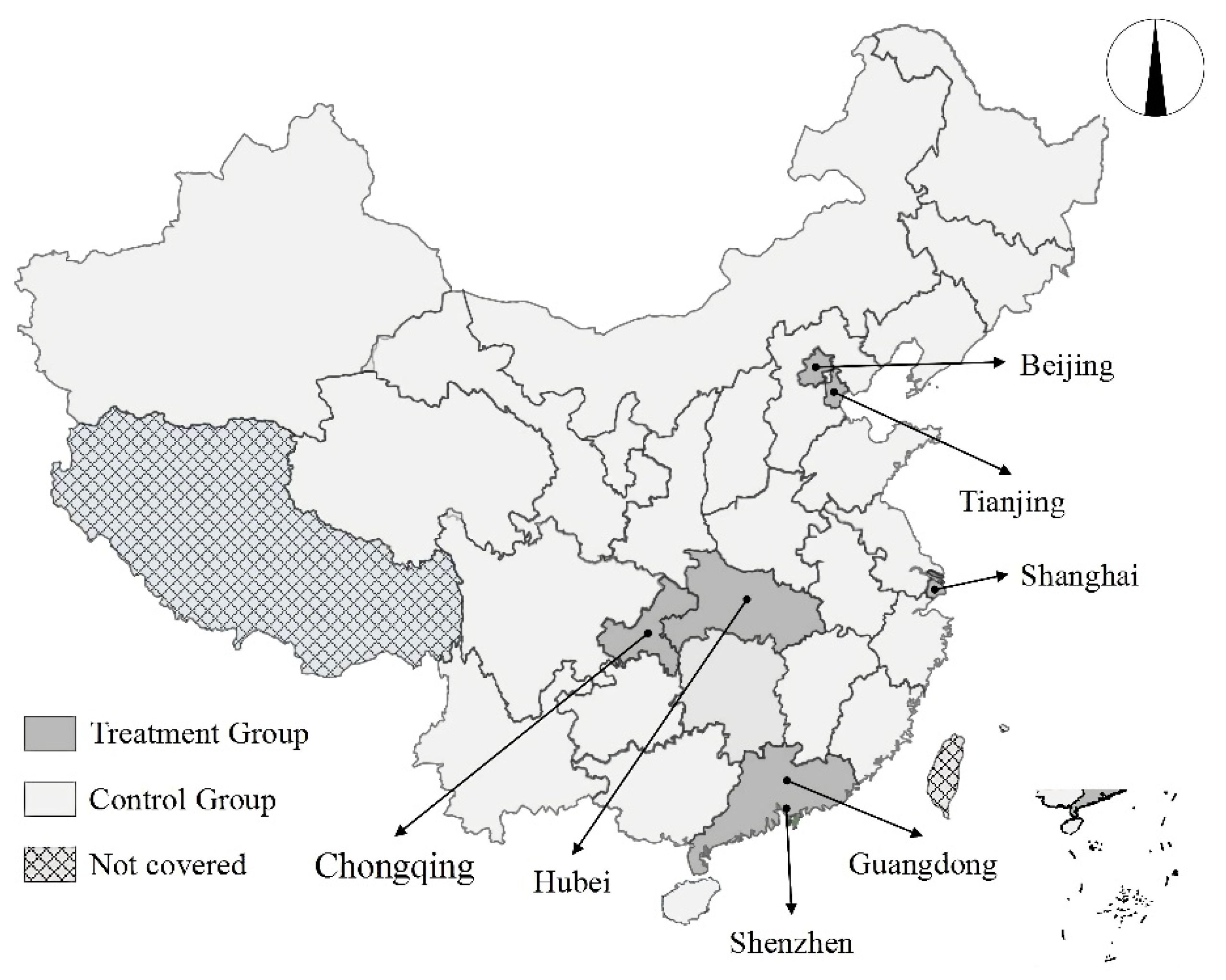