Exploring the Regional Dynamics of U.S. Irrigated Agriculture from 2002 to 2017

The United States has a geographically mature and stable land use and land cover system including land used as irrigated cropland; however, changes in irrigation land use frequently occur related to various drivers. We applied a consistent methodology at a 250 m spatial resolution across the lower 48 states to map and estimate irrigation dynamics for four map eras (2002, 2007, 2012, and 2017) and over four 5-year mapping intervals. The resulting geospatial maps (called the Moderate Resolution Imaging Spectroradiometer (MODIS) Irrigated Agriculture Dataset or MIrAD-US) involved inputs from county-level irrigated statistics from the U.S. Department of Agriculture, National Agricultural Statistics Service, agricultural land cover from the U.S. Geological Survey National Land Cover Database, and an annual peak vegetation index derived from expedited MODIS satellite imagery. This study investigated regional and periodic patterns in the amount of change in irrigated agriculture and linked gains and losses to proximal causes and consequences. While there was a 7% overall increase in irrigated area from 2002 to 2017, we found surprising variability by region and by 5-year map interval. Irrigation land use dynamics affect the environment, water use, and crop yields. Regionally, we found that the watersheds with the largest irrigation gains (based on percent of area) included the Missouri, Upper Mississippi, and Lower Mississippi watersheds. Conversely, the California and the Texas–Gulf watersheds experienced fairly consistent irrigation losses during these mapping intervals. Various drivers for irrigation dynamics included regional climate fluctuations and drought events, demand for certain crops, government land or water policies, and economic incentives like crop pricing and land values. The MIrAD-US (Version 4) was assessed for accuracy using a variety of existing regionally based reference data. Accuracy ranged between 70% and 95%, depending on the region. View Full-Text
Keywords: irrigated agriculture; watershed boundaries; geospatial model; land use; accuracy irrigated agriculture; watershed boundaries; geospatial model; land use; accuracy
►▼ Show Figures 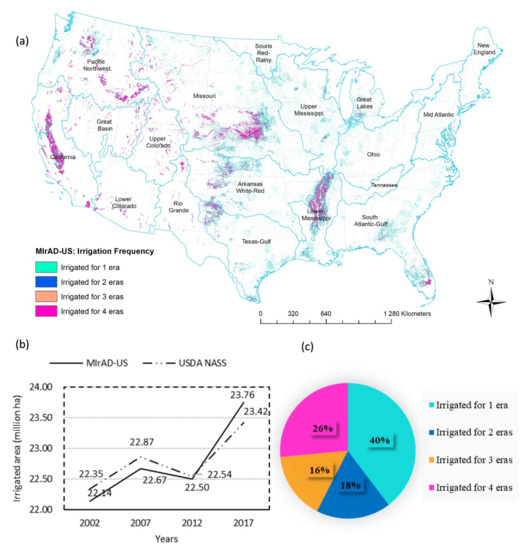