Exploring the Regional Dynamics of U.S. Irrigated Agriculture from 2002 to 2017
Previous Article in Journal

This study compares different nationwide multi-temporal spatial data sources and analyzes the cropland area, cropland abandonment rates and transformation of cropland to other land cover/land use categories in Slovakia. Four multi-temporal land cover/land use data sources were used: The Historic Land Dynamics Assessment (HILDA), the Carpathian Historical Land Use Dataset (CHLUD), CORINE Land Cover (CLC) data and Landsat images classification. We hypothesized that because of the different spatial, temporal and thematic resolution of the datasets, there would be differences in the resulting cropland abandonment rates. We validated the datasets, compared the differences, interpreted the results and combined the information from the different datasets to form an overall picture of long-term cropland abandonment in Slovakia. The cropland area increased until the Second World War, but then decreased after transition to the communist regime and sharply declined following the 1989 transition to an open market economy. A total of 49% of cropland area has been transformed to grassland, 34% to forest and 15% to urban areas. The Historical Carpathian dataset is the more reliable long-term dataset, and it records 19.65 km2/year average cropland abandonment for 1836–1937, 154.44 km2/year for 1938–1955 and 140.21 km2/year for 1956–2012. In comparison, the Landsat, as a recent data source, records 142.02 km2/year abandonment for 1985–2000 and 89.42 km2/year for 2000–2010. These rates, however, would be higher if the dataset contained urbanisation data and more precise information on afforestation. The CORINE Land Cover reflects changes larger than 5 ha, and therefore the reported cropland abandonment rates are lower. View Full-Text
Keywords: land abandonment; HILDA; CORINE Land Cover; Carpathian Historical Land Use Dataset; Landsat land abandonment; HILDA; CORINE Land Cover; Carpathian Historical Land Use Dataset; Landsat
►▼ Show Figures 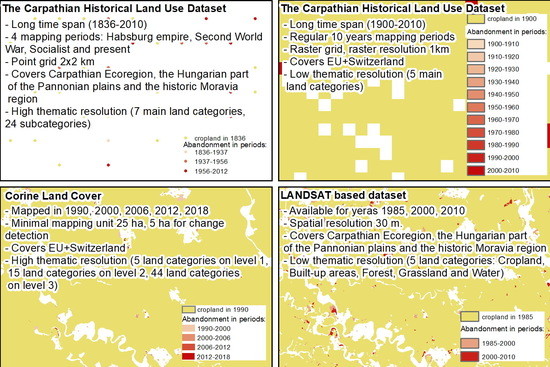