The Integration of New-Type Urbanization and Rural Revitalization Strategies in China: Origin, Reality and Future Trends
Previous Article in Journal

We explore the current situation in a viticultural region in Eastern Spain from a holistic and multifaceted research approach, which allowed us to understand the biophysical conditions, economic cost, social impact, and perception of the farmers’ community to the use of catch crops. A survey of the perception of the farmers, and an assessment of the biophysical impact of catch crops (CC) and tillage (C = Control plot) on soil organic matter, bulk density, infiltration capacity (single ring infiltrometer), and runoff generation and soil erosion (rainfall simulation experiments) was carried out. Two representative fields as study sites were selected in Les Alcusses valley, within Els Alforins wine production region. The results show that the use of CC increased soil organic matter, favored higher infiltration rates and runoff generation was delayed. Moreover, runoff rates and soil erosion were lowered. The perception of the farmers was mainly against the use of catch crops due to their view as it being ‘dirty’, their cost, and the loss of their reputation and respect by other farmers. Our survey proves that the farmers would accept the catch crops if a subsidy of 76.56 € ha−1 on average would be paid. Farmers see the use of a catch crop more as a benefit for the health of the Planet than for themselves. To achieve land degradation neutrality, education and dissemination programs should be developed to teach and inform the farmers of their key role in the proper management of vineyards. View Full-Text
Keywords: viticultural areas; catch crops; soil; sustainability; regional geographical approach; land management viticultural areas; catch crops; soil; sustainability; regional geographical approach; land management
►▼ Show Figures 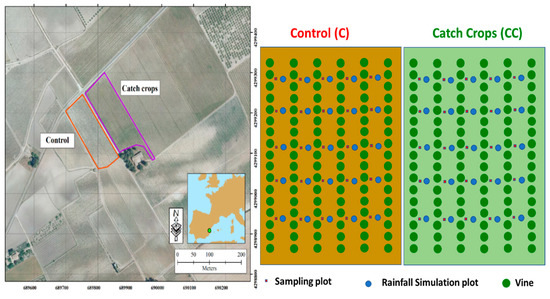 Artemi Cerdà
Full professor in Physical Geography. Leader of the Soil Erosion and Degradation Research Group. National and International project leader. Soil erosion and land degradation specialist
Zoom | Orient | As Lines | As Sticks | As Cartoon | As Surface | Previous Scene | Next Scene
We use cookies on our website to ensure you get the best experience. Read more about our cookies here.
Accept
We have just recently launched a new version of our website. Help us to further improve by taking part in this short 5 minute survey here. here.
Never show this again