Energy transition strategies in Germany have led to an expansion of energy crop cultivation in landscape, with silage maize as most valuable feedstock. The changes in the traditional cropping systems, with increasing shares of maize, raised concerns about the sustainability of agricultural feedstock production regarding threats to soil health. However, spatially explicit data about silage maize cultivation are missing; thus, implications for soil cannot be estimated in a precise way. With this study, we firstly aimed to track the fields cultivated with maize based on remote sensing data. Secondly, available soil data were target-specifically processed to determine the site-specific vulnerability of the soils for erosion and compaction. The generated, spatially-explicit data served as basis for a differentiated analysis of the development of the agricultural biogas sector, associated maize cultivation and its implications for soil health. In the study area, located in a low mountain range region in Western Germany, the number and capacity of biogas producing units increased by 25 installations and 10,163 kW from 2009 to 2016. The remote sensing-based classification approach showed that the maize cultivation area was expanded by 16% from 7305 to 8447 hectares. Thus, maize cultivation accounted for about 20% of the arable land use; however, with distinct local differences. Significant shares of about 30% of the maize cultivation was done on fields that show at least high potentials for soil erosion exceeding 25 t soil ha−1 a−1. Furthermore, about 10% of the maize cultivation was done on fields that pedogenetically show an elevated risk for soil compaction. In order to reach more sustainable cultivation systems of feedstock for anaerobic digestion, changes in cultivated crops and management strategies are urgently required, particularly against first signs of climate change. The presented approach can regionally be modified in order to develop site-adapted, sustainable bioenergy cropping systems. View Full-Text
Keywords: biomethantion; biogas; environmental impact; land use; risk assessment; soil management strategy biomethantion; biogas; environmental impact; land use; risk assessment; soil management strategy
►▼ Show Figures 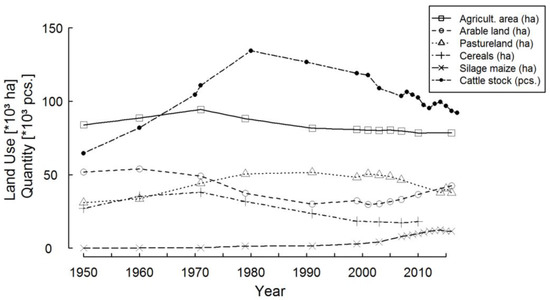