Study on Variations in Climatic Variables and Their Influence on Runoff in the Manas River Basin, China
Previous Article in Journal

Occurrence of Pharmaceuticals in Wastewater and Their Interaction with Shallow Aquifers: A Case Study of Horní Beřkovice, Czech Republic
Previous Article in Special Issue

Farm Typology in the Berambadi Watershed (India): Farming Systems Are Determined by Farm Size and Access to Groundwater

Potential impacts of climate change on the streamflow of the Bernam River Basin in Malaysia are assessed using ten Global Climate Models (GCMs) under three Representative Concentration Pathways (RCP4.5, RCP6.0 and RCP8.5). A graphical user interface was developed that integrates all of the common procedures of assessing climate change impacts, to generate high resolution climate variables (e.g., rainfall, temperature, etc.) at the local scale from large-scale climate models. These are linked in one executable module to generate future climate sequences that can be used as inputs to various models, including hydrological and crop models. The generated outputs were used as inputs to the SWAT hydrological model to simulate the hydrological processes. The evaluation results indicated that the model performed well for the watershed with a monthly R2, Nash–Sutcliffe Efficiency (NSE) and Percent Bias (PBIAS) values of 0.67, 0.62 and −9.4 and 0.62, 0.61 and −4.2 for the calibration and validation periods, respectively. The multi-model projections show an increase in future temperature (tmax and tmin) in all respective scenarios, up to an average of 2.5 °C for under the worst-case scenario (RC8.5). Rainfall is also predicted to change with clear variations between the dry and wet season. Streamflow projections also followed rainfall pattern to a great extent with a distinct change between the dry and wet season possibly due to the increase in evapotranspiration in the watershed. In principle, the interface can be customized for the application to other watersheds by incorporating GCMs’ baseline data and their corresponding future data for those particular stations in the new watershed. Methodological limitations of the study are also discussed. View Full-Text
Keywords: climate change; SWAT hydrological model; streamflow; Bernam River Basin; Malaysia climate change; SWAT hydrological model; streamflow; Bernam River Basin; Malaysia
►▼ Show Figures 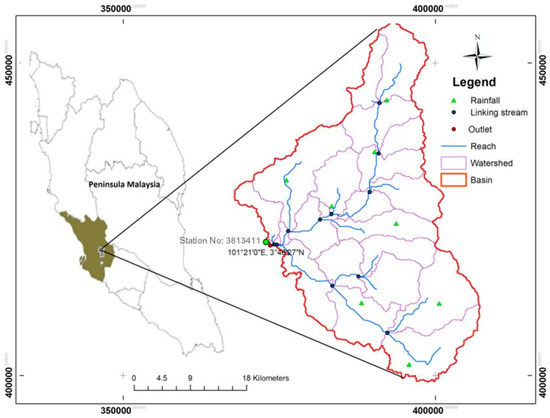