Analysis of Influencing Factors of Water Footprint Based on the STIRPAT Model: Evidence from the Beijing Agricultural Sector
Next Article in Special Issue

This paper proposes a new rapid simplified inundation model (NRSIM) for flood inundation caused by rainstorms in an urban setting that can simulate the urban rainstorm inundation extent and depth in a data-scarce area. Drainage basins delineated from a floodplain map according to the distribution of the inundation sources serve as the calculation cells of NRSIM. To reduce data requirements and computational costs of the model, the internal topography of each calculation cell is simplified to a circular cone, and a mass conservation equation based on a volume spreading algorithm is established to simulate the interior water filling process. Moreover, an improved D8 algorithm is outlined for the simulation of water spilling between different cells. The performance of NRSIM is evaluated by comparing the simulated results with those from a traditional rapid flood spreading model (TRFSM) for various resolutions of digital elevation model (DEM) data. The results are as follows: (1) given high-resolution DEM data input, the TRFSM model has better performance in terms of precision than NRSIM; (2) the results from TRFSM are seriously affected by the decrease in DEM data resolution, whereas those from NRSIM are not; and (3) NRSIM always requires less computational time than TRFSM. Apparently, compared with the complex hydrodynamic or traditional rapid flood spreading model, NRSIM has much better applicability and cost-efficiency in real-time urban inundation forecasting for data-sparse areas. View Full-Text
Keywords: urban flood; urban rainstorm inundation; drainage basin; NRSIM; TRFSM; data requirement; model efficiency urban flood; urban rainstorm inundation; drainage basin; NRSIM; TRFSM; data requirement; model efficiency
►▼ Show Figures 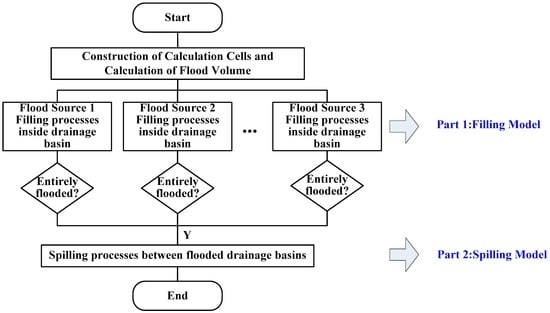