Analysis of Influencing Factors of Water Footprint Based on the STIRPAT Model: Evidence from the Beijing Agricultural Sector

Beijing suffers from a severe water shortage. To find the key factors that impact the agricultural water footprint (WF) within Beijing to relieve the pressure on water resources, this study quantifies the agricultural WF within Beijing from 1980 to 2012 and examines the factors of population, urbanization level, GDP per capita, Engel coefficient, and total rural power using an extended stochastic impact by regression on population, affluence and technology (STIRPAT) model. Ridge regression is employed to fit the extended STIRPAT model. The empirical results reveal that the Engel coefficient, which is defined as the total amount of food expenses accounted for the proportion of total personal consumption expenditures, has the largest positive impact on the increase in the agricultural WF, followed by urbanization. In contrast, total rural power, population, and GDP per capita can decrease the agricultural WF. Finally, policy recommendations from technological development, agriculture plantation structure adjustment, and virtual water imports are provided to cope with water shortages. View Full-Text
Keywords: water footprint; STIRPAT model; agricultural sector; influencing factors; Beijing water footprint; STIRPAT model; agricultural sector; influencing factors; Beijing
►▼ Show Figures 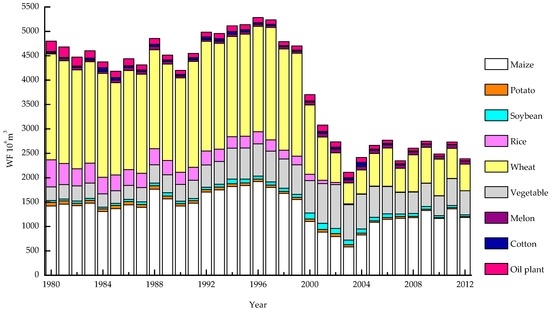