Mercury (Hg), as the most potentially hazardous heavy metal, has accumulated in the aquatic environment and has caused concern about its safety. To test the toxic effects of mercury chloride (Hg2+) on rare minnow (Gobiocypris rarus), the acute toxicity of Hg2+ to embryos, newly hatched larvae, juvenile fish, and the short-term developmental toxicity of Hg2+ to the embryo and sac-fry stages, were investigated. The 96-h LC50 values of Hg2+ to embryos, newly hatched larvae, and juvenile fish were 0.56, 0.07, and 0.10 mg/L, respectively, suggesting newly hatched larvae were the most sensitive, followed by juvenile fish, while embryos were the most resistant in response to an Hg2+ challenge. The research data revealed that the safe level of Hg2+ exposure for rare minnow was 0.7 μg/L. In addition, the LOEC (lowest observed effect concentration) and NOEC (no observed effect concentration) values of Hg2+ to heartbeat, mortality, malformation rate, and body length of survived larvae were identically, 0.05 and 0.01 mg/L, respectively. These findings indicated that Hg2+ had lethal effects on rare minnow at different life stages, and that newly hatched larvae were the most sensitive stage. The above findings have important implications for better understanding the environmental risk assessment of Hg2+ on aquatic organisms. View Full-Text
Keywords: acute toxicity; developmental toxicity; embryos; Hg2+; rare minnow acute toxicity; developmental toxicity; embryos; Hg2+; rare minnow
►▼ Show Figures 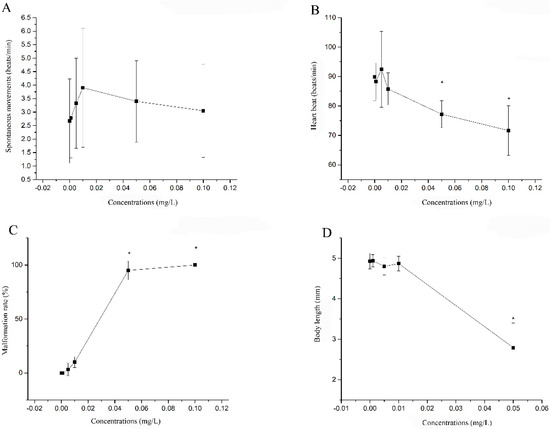