Flushing Capacity of a Stored Volume of Water: An Experimental Study
Next Article in Special Issue

:
Dual-frequency ultrasound (DFUS) has received considerable attention for enhanced inactivation of microbial pathogens for medical treatment, but remains little investigated for water disinfection. This study is focused on inactivation of E. coli and E. faecalis in aqueous solution under dual-frequency ultrasonication at 120 + 1700 kHz using persulfate. Single-frequency ultrasonic inactivation showed the higher efficiency of 1700 kHz, compared to 120 kHz. Under the experimental conditions used, no measurable synergy between two frequencies was observed in the absence of persulfate. A high time-based synergistic effect in terms of total inactivation (5-log) of both bacterial species was achieved by DFUS-activated persulfate with synergistic indices of 1.8–5.0. We assume that this is attributed to increased generation of reactive oxygen species (primarily, sulfate anion (SO4•−) and hydroxyl (•OH) radicals) as a result of enhanced acoustic cavitation. Radical probing and scavenging tests confirmed the generation of radicals and showed a nearly equal contribution of •OH and SO4•−. This method could be an attractive alternative to ultraviolet technology for fast and effective water disinfection.
Keywords:
dual-frequency ultrasound; high frequency; 1.7 MHz; 120 kHz; synergistic effect; persulfate; inactivation; water disinfection 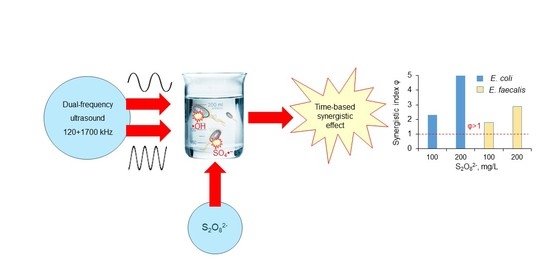 To date, the World Health Organization (WHO) estimates that at least 2 billion people use microbially contaminated sources of drinking water, which transmits diseases, such as diarrhea and dysentery, and causes 485,000 diarrheal deaths each year [1]. Reducing the level of microbial pathogens in water bodies is essentially important for the protection of drinking water quality and public health. Ultrasonication is regarded as an effective reagent-free method of water disinfection, which is much less affected by water quality compared to ultraviolet technology [2]. It is known that the ultrasonic acoustic wave of sufficient power causes cavitation, which produces collapsing microbubbles in water. This leads to generation of reactive oxygen species (ROS), such as hydroxyl radicals (•OH), which are responsible for inactivation processes [3]. Cavitation also induces different mechanical effects, which in addition damage the cell [4,5,6]. A synergistic effect is achievable under irradiation of water with two ultrasonic frequencies. In this regard, dual-frequency ultrasound (DFUS) has received considerable attention for water treatment and the related research has been recently reviewed [7]. The literature survey showed that microbial inactivation in water by DFUS remained much less investigated, compared to degradation of organic pollutants. In related research, only low frequencies (≤100 kHz) were used in combinations of 16 + 20 kHz [8], 17 + 33 and 70 + 100 kHz, coupled with NaClO [9,10]. A high-frequency ultrasound above 100 kHz and in the megahertz range has not been used in dual combinations for water disinfection so far. Meanwhile, high frequencies were successfully applied for medical treatment (sonodynamic therapy). In general, it is based on the apoptosis of pathogenic cells (e.g., cancer cells) by ROS, which are produced upon activation of sonosensitizers with frequencies up to 2 MHz, including DFUS [11,12]. For instance, the synergistically enhanced •OH generation was reported earlier in sonodynamic therapy under exposure to DFUS at 0.5 + 1 MHz and TiO2 [13]. In view of this, DFUS-based advanced oxidation processes (AOPs) using high frequencies can be identified as an emerging research field and a promising tool for water disinfection.
Among environmentally safe oxidants (hydrogen peroxide, permanganate, ferrate), persulfate (PS) has been extensively employed in sulfate radical (SR)-based AOPs for water treatment and disinfection [14,15,16,17]. Its oxidation potential (E0 = 2.07 V) is higher than permanganate (E0 = 1.7 V) and hydrogen peroxide (E0 = 1.77 V) [18]. Due to their higher stability, PS salts are easily transported, stored and dosed. It is activated by many methods, including acoustic cavitation, via homolysis of the O-O bond and production of sulfate radicals (1). •OH are further generated upon their reaction with water (2):
Accordingly, the higher radical yield is achievable in SR-AOPs. The main advantages of SO4•− over •OH include higher redox potential (E0 = 2.6–3.1 V versus 1.9–2.7 V) [19], a longer half-life and a wider range of operational parameters (e.g., pH) [20,21].
The efficiency of radicals’ generation also depends on the ultrasonic frequency. Wang and Wang (2022) [18] concluded that, with increasing frequency, cavitation promotes the conversion of PS and more radicals are generated. Earlier, Kermani et al. (2020) [22] found that furfural degradation by sono-activated PS after 90 min exposure increased from 50.6 to 95.3% by increasing the frequency from 35 to 130 kHz. Therefore, in view of increased ROS production and intensification of inactivation processes, high-frequency ultrasound represents an attractive alternative to low-frequency ultrasound in PS-based processes. To date, there have been only a few reports on microbial inactivation by sono-activated PS at 35 kHz [23] and 600 kHz [24,25] involving iron-catalyzed processes. At the time of writing, no more studies have been published with a focus on water disinfection by DFUS-activated PS, as well as by DFUS alone, at high frequencies above 100 kHz. In our previous studies, a single frequency of 1700 kHz was applied for intensifying bacterial inactivation by sonophotolysis [26,27] and sono-photo-Fenton-like process [28].
The aim of the present study was to evaluate a synergistic effect of dual-frequency ultrasound on inactivating Escherichia coli and Enterococcus faecalis in model aqueous solution using persulfate. The generation of radicals and the mechanisms of synergistic inactivation, which are based on increased ROS yield and sonoporation due to the generation of additional frequencies under DFUS exposure, have been also considered. This work is the first application of high frequencies in dual combination of 120 + 1700 kHz for water disinfection purposes. These frequencies were selected due to the availability of cheap commercial transducers and generators, which makes their practical application technically and economically feasible. The frequency of 120 kHz is used for fine cleaning of complex parts in industry, whereas 1700 kHz is widely applied for creating water mist and humidifying the air.

The strains of Escherichia coli K-12 and Enterococcus faecalis B 4053 were purchased from All-Russian collection of industrial microorganisms (Genetika, Moscow, Russia) and used as indicators of fecal contamination in water. Overnight cultures of E. coli and E. faecalis were obtained by aerobic incubation of lyophilized cells (37 °C, 180 rpm) in nutrient broth (SRCAMB, Obolensk, Russia) and tryptic soy broth (Merck, Kenilworth, USA), respectively. Afterwards, the cells were centrifuged (4000 rpm, 5 min), washed twice with phosphate-buffered saline (PBS) at pH 7.4 (Gibco® Life technologies, Paisley, UK) and resuspended in fresh PBS to obtain the stock bacterial suspension (108 CFU/mL). An aliquot of 0.15 mL was added to deionized water (1.5 L) to obtain a synthetic water with an initial population of 105 CFU/mL.
Disinfection experiments were conducted in an orthogonal dual-frequency sonoreactor, which represents a rectangular cuboid with a capacity volume of 4 L (Figure 1).
Four piezoceramic transducers (120 kHz, 50 W each, Fan Ying Sonic, Granbosonic Ultrasonic Generator 300 W/120 kHz, Shenzhen, China) were mounted on its long opposite sides (two transducers on each side). Six transducers (1700 kHz, total power 150 W, MSX, model ZCX-RM6D48F, Jiaxing, China) and a generator were assembled into a compact unit and placed on the ground of the reactor to be orthogonally positioned to the 120 kHz transducers. The power unit (Stepperonline, model S-250-48, Nanjing, China) was outside the bath. The temperature of irradiated water was kept at 20 ± 2 °C by circulating cooling water through the copper tubes. Deionized water, artificially contaminated with E. coli or E. faecalis (105 CFU/mL), was irradiated simultaneously with two frequencies in the absence or presence of potassium persulfate (Vekton, St. Petersburg, Russia). Control experiments included irradiation of contaminated water with single frequency at 120 or 1700 kHz. Samples (0.1 mL each) were withdrawn after each exposure, diluted (if required), spread onto nutrient agar (E. coli) and tryptic soy agar (E. faecalis) plates in triplicate and incubated for 24 h at 37 °C. The survived cells were counted as CFU/mL and plots of the log reduction (Lg(N/N0)) versus exposure time (min) were obtained to monitor the inactivation kinetics. Each experiment was conducted in triplicate and the obtained data were statistically treated using Statistica 10.0 software.
Radical probing experiments were performed in the same sonoreactor using 20 μM p-chlorobenzoic acid (pCBA, 99%, Acros, Geel, Belgium) as a reference compound. Radical scavenging tests for evaluating the contribution of SO4•− and •OH were also conducted using pCBA in the presence of methanol and t-buthanol (Khimreaktivsnab, Ufa, Russia). Samples after each exposure were analyzed for residual concentration by HPLC (Agilent 1260 Infinity chromatograph, Zorbax SB-C18 column, UV detector). pCBA was eluted with a mixture of methanol and 1% acetic acid (70:30) at a flow rate of 0.8 mL/min and detected at 230 nm. Degradation plots were presented as the ratio of residual and initial concentration (C/C0) versus treatment time (min).

A high time-based synergistic effect in terms of 5-log (total) inactivation of E. coli and E. faecalis in model aqueous solution was found using dual-frequency ultrasonication at 120 + 1700 kHz in the presence of persulfate. We presume that it is primarily caused by generation of additional frequencies, which, in turn, increase the sonoporation and ROS yield upon activation of persulfate. Comparing single frequencies, 1700 kHz was found to be more efficient than 120 kHz due to enhanced ROS generation. Radical probing showed the accelerated degradation of pCBA as a reference compound and confirmed this conclusion. This study demonstrates promising results for fast and environmentally safe disinfection of real waters, including drinking water.

This research was funded by Russian Science Foundation, grant number 22-24-00482. 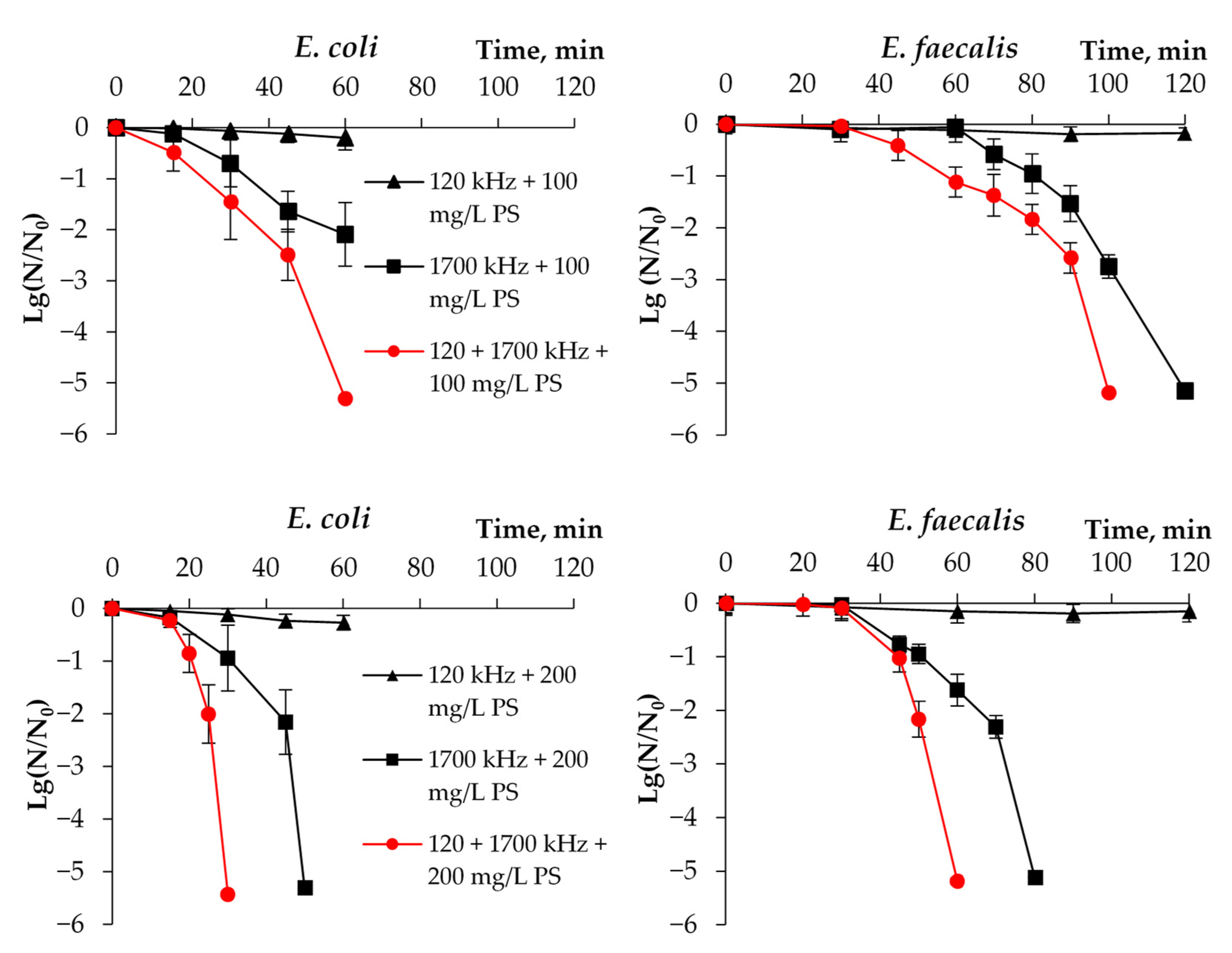 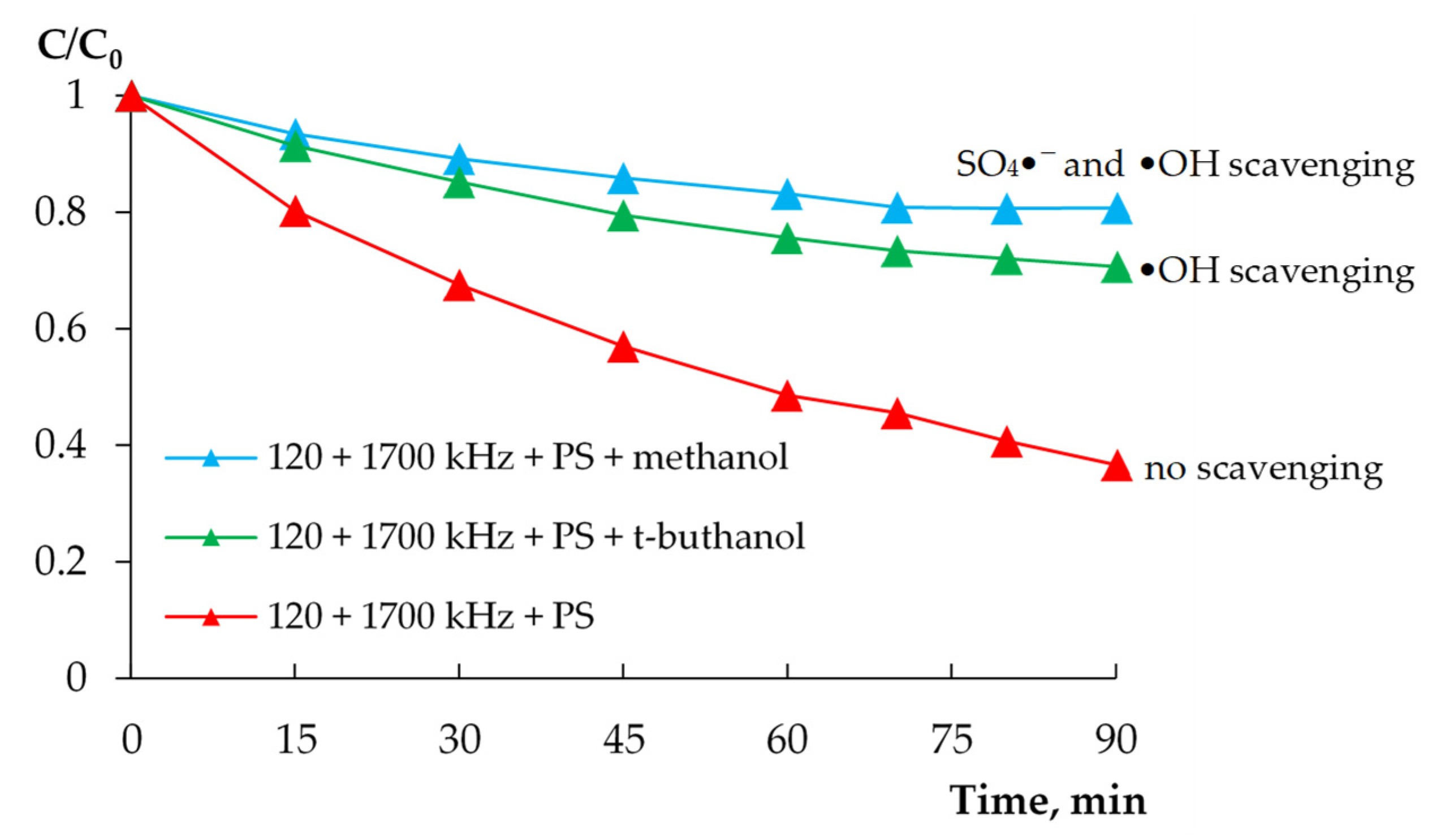